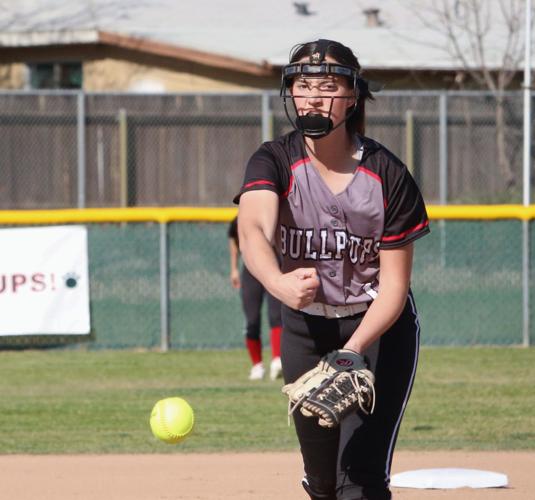 In this Sentinel file photo, Hanford pitcher Arrysa Danell makes a pitch during the first inning of a West Yosemite League game against Redwood at Hanford High School on March 29. Danell has a 1.07 ERA and has pitched 10 complete games and eight shutouts. 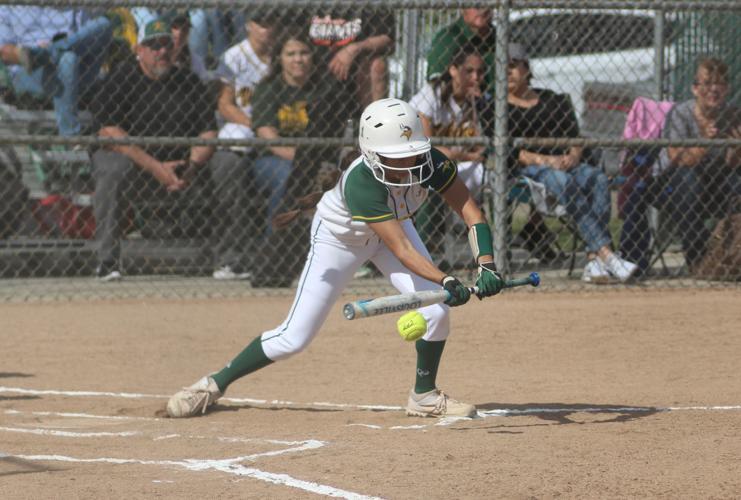 In this Recorder file photo, Kingsburg second baseman Marissa Montelongo lays down a bunt during the first inning of a Central Sequoia League game against Selma High at Duran Diamond on April 2. Montelongo, a Saint Mary's verbal commit, is batting .389/.468/.642 with four home runs and 18 RBIs for the Vikings this season. 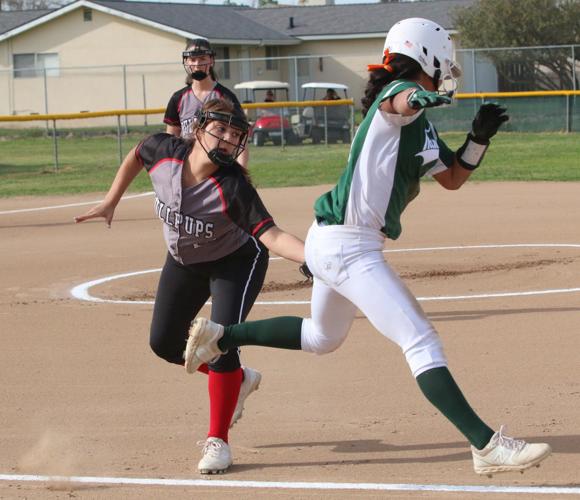 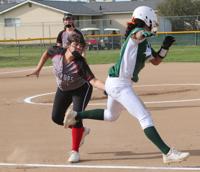 In this Sentinel file photo, Hanford first baseman Ashlyn Vidana tags the runner for an out during the first inning of a West Yosemite League game against El Diamante at Hanford High School on March 22. Vidana leads the team with a .370 batting average and is third with 17 RBIs. 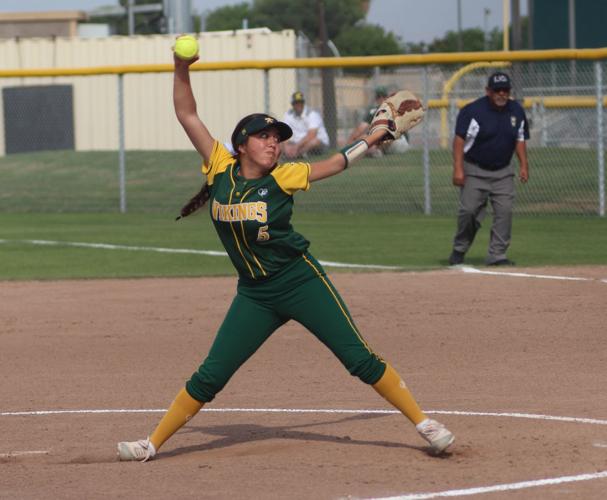 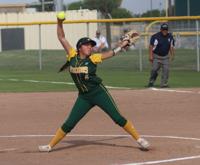 In this Sentinel file photo, Hanford pitcher Arrysa Danell makes a pitch during the first inning of a West Yosemite League game against Redwood at Hanford High School on March 29. Danell has a 1.07 ERA and has pitched 10 complete games and eight shutouts.

In this Recorder file photo, Kingsburg second baseman Marissa Montelongo lays down a bunt during the first inning of a Central Sequoia League game against Selma High at Duran Diamond on April 2. Montelongo, a Saint Mary's verbal commit, is batting .389/.468/.642 with four home runs and 18 RBIs for the Vikings this season.

In this Sentinel file photo, Hanford first baseman Ashlyn Vidana tags the runner for an out during the first inning of a West Yosemite League game against El Diamante at Hanford High School on March 22. Vidana leads the team with a .370 batting average and is third with 17 RBIs.

After 29 games, the 30th and final one at Margie Wright Diamond will define two team’s seasons — ultimate success or a disheartening conclusion.

Both teams crowded the top of Division II for most of the season playing tough opponents and winning at a high rate. As a result, they were awarded the top two seeds and each won two playoff games to make their way to Fresno State.

Heading into the title game, Hanford currently has a 23-6 overall record and were the 2019 West Yosemite League champions after going 9-1 in league play. The Bullpups are a well-rounded team with the three main facets of softball all played at a high level: pitching, offense and defense.

The team was working on all three during Thursday’s practice at Hanford High School. Hanford coach Donnie Fagundes, who’s coached the team since 2008, made sure to get out to the field early to prepare it after the rain late Wednesday night.

“The team’s feeling really good, we’re really upbeat since Tuesday,” Fagundes said. “We’ve had some good practices. The kids are really excited and looking forward to it.”

Throughout the season, Hanford pitcher Arrysa Danell has been about as dominant as one could be in the circle. The junior right-hander has a 16-3 record, including 10 complete games and eight shutouts, with a 1.07 ERA.

Danell has a 6.93 strikeout-to-walk ratio and has allowed one run over her last five starts. In her two playoff outings, she’s allowed seven hits in 12 innings and zero earned runs. She could easily be the team’s MVP after the season she’s put together up until this point.

The Bullpups also have an excellent second option in Lillianna Garcia. She has 60 strikeouts in 62 innings and a 2.48 ERA this year as a freshman. The change-of-pace righty provides steady relief and gets outs when her team needs them the most.

At the plate, the batters are disciplined and make contact when they need to. They have six players batting over .300 (min. 50 plate appearances) and average 5.9 runs per game. After facing Oregon State commit Xiao Gin on Tuesday, they’ll have to put the ball in play against another tough pitcher in Kingsburg’s Kayla Medrano (11-3), who sports a 2.08 ERA.

“Every pitcher’s different — their speed, their velocity, their movement, they’re all different,” Hanford shortstop Marissa Cruz, who’s 4-for-6 in the playoffs, said. “It’s just all about adjusting, whether it’s a little bit slower, whether it’s a little bit faster. … Whether it takes a couple strikeouts, whether it takes a couple ground balls, little pop flies, it’s just about catching up and we’ve been working on it at practice.”

Hitting isn’t the only way they get on base. The team draws an average of 3.93 walks per game with a 0.934 walk-to-strikeout ratio. And once on the base pads, the Bullpups steal at an exceedingly high clip of .862, including swiping 9-of-11 bases in the playoffs.

The team also has center fielder Emily Juarez, who is the only senior and last remaining member of the 2016 championship team. Hanford won the Division III title over Independence that season.

Juarez said she shared words of advice with her teammates and reminded them that the Valley championship is just another game.

Juarez also added that one of the keys to winning is going to be the team’s trust in each other.

That trust is apparent in their defense where they’re one of the best at it, if not the best in their division. Of the top 10 teams in Division II, Hanford has the second fewest errors with 30. Only Ridgeview, who played four fewer games than Hanford, has less errors this season with 29.

The Bullpups have also turned a double play in each one of their playoff games and have made some outstanding catches in foul territory.

“Our coach always tells us all the time defense wins championships,” Cruz said. “We’ve learned that, we’ve realized that. It’s just us communicating together at practice and [during] the games before every play.”

Against common opponents, Hanford has a 6-3 record and Kingsburg has a nearly identical 6-3-1 record.

Hanford went 1-1 against Redwood, while Kingsburg was 2-0. Hanford defeated Stockdale and Kingsburg lost to them. They both defeated Sanger, San Luis Obispo and Hanford West. The Bullpups and Vikings play different styles of softball, but the end result of winning stays consistent.

“We’re about as comparable as can be,” Fagundes said. “It’s going to be like any other game, you come to play, anybody can beat anybody. The team’s that I’ve talked to, the information they’ve given me, it’s all doable and we intend to try to do it to win the game.”

Last season, Hanford lost in the quarterfinals to Sanger on a questionable call at first base. The Sanger runner was ruled safe after knocking the ball out of first baseman Ashlyn Vidana’s glove. Fagundes argued it was interference, but to no avail and the team would go on to lose 9-8 on a walk-off single.

“Every playoff game we’ve had at home, the score has been on the scoreboard when they got here,” Fagundes said. “They see the score, they know what the score was, they know what that’s all about. Whether or not they remember the exact feeling, we’re trying to remind them that you’re down to one game, you lose you’re out. I think it’s helped, I really do.”

An identical play happened in the quarterfinals this season against Ridgeview, but this time it was ruled interference. The late justice hasn’t erased the memory of last season.

As much as the Bullpups are capable of big innings, Fagundes hopes to see the offense a little more dispersed today with some continuity when it comes to scoring.

“Obviously, you want to score a run or two every inning if possible,” Fagundes said. “To hope you score all your runs, and hope it’s enough, in one inning, in my opinion, it’s a lot to ask. That’s why we play seven [innings] we should score in seven.”

With a supportive community rooting for them all season, members of the team expect to see green and gold in the red seats of the Fresno State venue.

“We think it’s going to be a packed house,” Montelongo said. “We have many people who come who don’t have any relation to the team and we love all the support and we know that no matter what the outcome is they’re always going to support us.”

“I think we’re going to stand out over there,” Kingsburg catcher Marissa Gonzalez said. “Even at the away games, we have people that are over 80 years old that just come out every year, so I think there’s going to be a lot of green and gold.”

This will be the first Valley championship trip for head coach Randy Sieger, who is in his fourth year with the program.

“We have things to work on, but I think this late in the season we are who we are,” Sieger said about the team’s preparation this week. “We just need to make sure we’re sharp. I don’t think we’re going to change anything in the first couple of days, so just keeping everything sharp and keeping our fundamentals sound.”

After receiving a first-round bye, Kingsburg started its playoff run with a 5-0 victory over No. 8 Sanger in the quarterfinals on May 14. The Vikings clinched their Valley championship appearance after defeating No. 4 Redwood 3-0 in the semifinals.

Kingsburg pitcher Kayla Medrano (12-3) threw a two-hit complete-game shutout in both games. The sophomore has been tough to score on in the playoffs allowing a combined four hits in 14 scoreless innings. Medrano played in the Division IV championship game with Exeter last season.

In both games, Gonzalez has provided power for the Vikings. The sophomore has hit a solo home run in each playoff game. For the season, Gonzalez has a team-high 11 home runs and 50 RBIs.

With rain in today’s forecast, there is a possibility some or all of the Central Section championship games will be canceled. If they are, they will be rescheduled for a later date and will be played at the higher-seeded team’s home field.