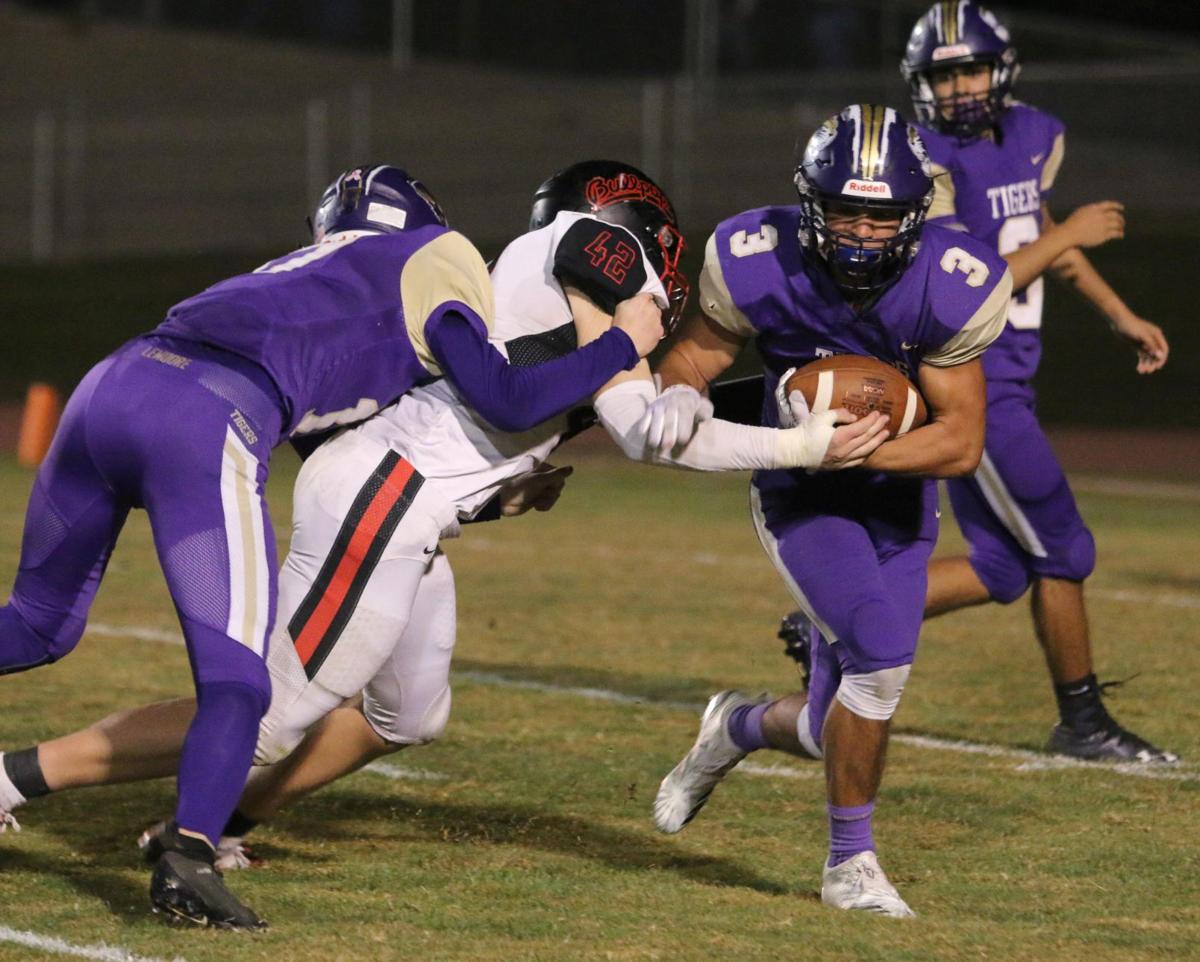 Lemoore running back Brandon Hargrove (3) breaks a tackle during the second quarter of a West Yosemite League game against Hanford at Tiger Stadium on Friday. 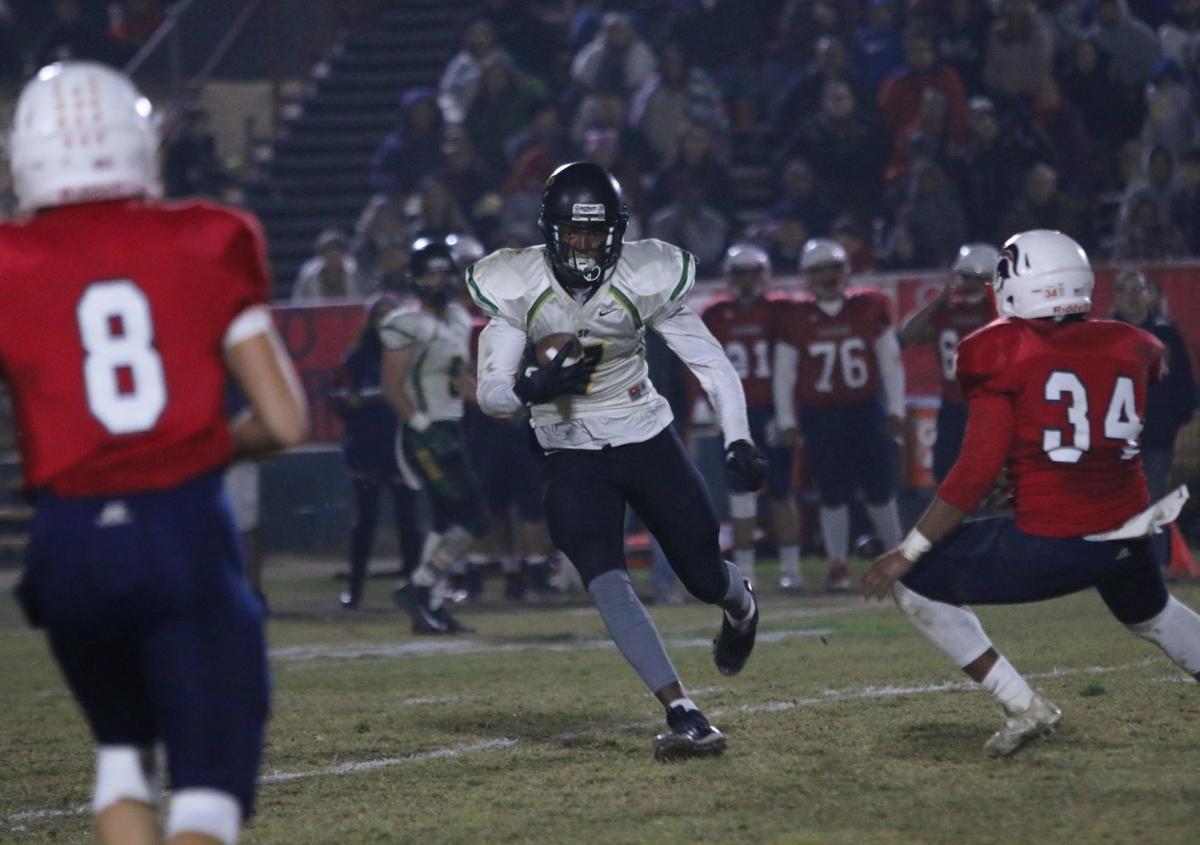 Sierra Pacific wide receiver Jayson Littlejohn runs after a catch during the second quarter of the CIF Central Section Division VI championship against Strathmore at Spartan Stadium on Friday.

Lemoore running back Brandon Hargrove (3) breaks a tackle during the second quarter of a West Yosemite League game against Hanford at Tiger Stadium on Friday.

Sierra Pacific wide receiver Jayson Littlejohn runs after a catch during the second quarter of the CIF Central Section Division VI championship against Strathmore at Spartan Stadium on Friday.

VISALIA — The Visalia Optimist Club and the Lemoore Kiwanis Club are excited to present the 2019 Tulare-Kings County East-West Football All-Star Game this Saturday, June 22 in Visalia.

Tulare Western’s Ryan Rocha will be leading the West squad, and is making his fourth appearance in the All-Star game. In 2009 he made his first appearance as an assistant coach under the legendary Mark Rogers. He was head coach for the west in 2014, and 2017. He just completed his seventh season with the Mustangs, and has compiled an impressive resume in that time which includes a 52-20 record, one EYL title in 2015, and two D-III Valley Championship appearances.

“This game is a fun experience,” Rocha said. “When you see all the names who have coached this game before you, it is truly an honor.”

Porterville’s Michael Machado will be coaching the East squad in his first appearance as a head coach. In 2012, he coached in the All-Star Game as an assistant for Mark Gambini at Mission Oak. In two seasons with the Panthers, he has revived the program to once again be a potential EYL contender. In 2018, he led the Panthers to their first winning season at 8-3 in five years and the program’s first playoff appearance in four seasons, a 20-7 loss to the Wasco Tigers.

The East Squad’s offense and defense will be led by two players who helped take their teams to a state bowl game. Central Valley Christian’s Eric Draget went 105-of-180 for 2,186 yards and 30 touchdowns during his senior season. He averaged a 127.0 quarterback rating, and was a huge reason why the Cavaliers made it to the Division IVAA State Championship Bowl Game.

Strathmore’s Damian Valencia will be anchoring the East’s linebacker core. He made 106 tackles, 79 of which were solo, last season. That added to his career tackles total, which gave him 250 in four years. His nose for the football was a big reason why Strathmore made their third-straight State Championship Bowl Game.

Also playing quarterback for the East squad will be comeback-kid Jaedyn Pineda. The Mt. Whitney signal-caller threw for 3,845 yards during his senior campaign and accounted for 54 of the Pioneer’s 56 touchdowns through the air. He also masterminded a second-half comeback against Redwood during the Cowhide Game for the second season in a row.

The West Squad features two players who will be a matchup nightmare for their opponents. Sierra Pacific’s Jayson Littlejohn hauled in 57 catches for 1,003 yards and nine touchdowns as a senior. He added 406 more yards other places on the field for a total of 1,409 all-purpose yards. His older brother Kenneth Littlejohn played in the All-Star Game in 2015 when he was the leading rusher for the Golden Bears.

Dinuba linebacker Daniel Long led the Emperors with 82 total tackles. In 12 games he averaged close to seven tackles a game. He has 3.5 sacks to his credit as he led the Emperors defense to within one game of their second straight Division II Valley Championship appearance.

Lemoore’s Brandon Hargrove will also play a key role as one of the featured tailbacks for the West Squad. He had 73 carries for 518 yards and scored a total of 16 touchdowns for the Tigers as a senior. He averaged 7.1 rushing yards last season.

Gates open at 6 p.m. with game time at 7:30 p.m. at Groppetti Community Stadium at Golden West High School, 1717 N. McAuliff St. in Visalia. Tickets are $10 for adults, $5 for students, and free for any youth football player wearing their jersey. Tickets are available at the gate or by calling (559) 909-2996. Commemorative programs will be available at the game for $5. Proceeds from the game benefit scholarships for local high school athletes.

How much coffee trivia do you know?

Want a summary of today's news? Sign up for daily headlines.