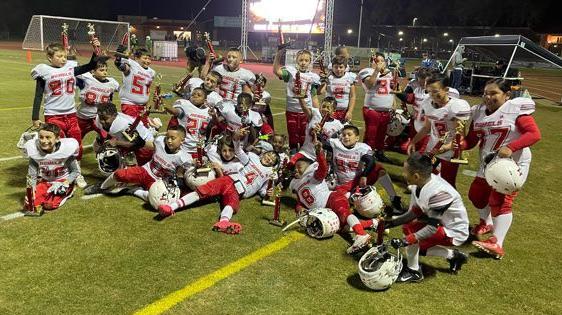 The Hanford Rebels combined elements of Hanford, Lemoore and Porterville teams to create a championship-winning unit in the All Valley Youth Football circuit. 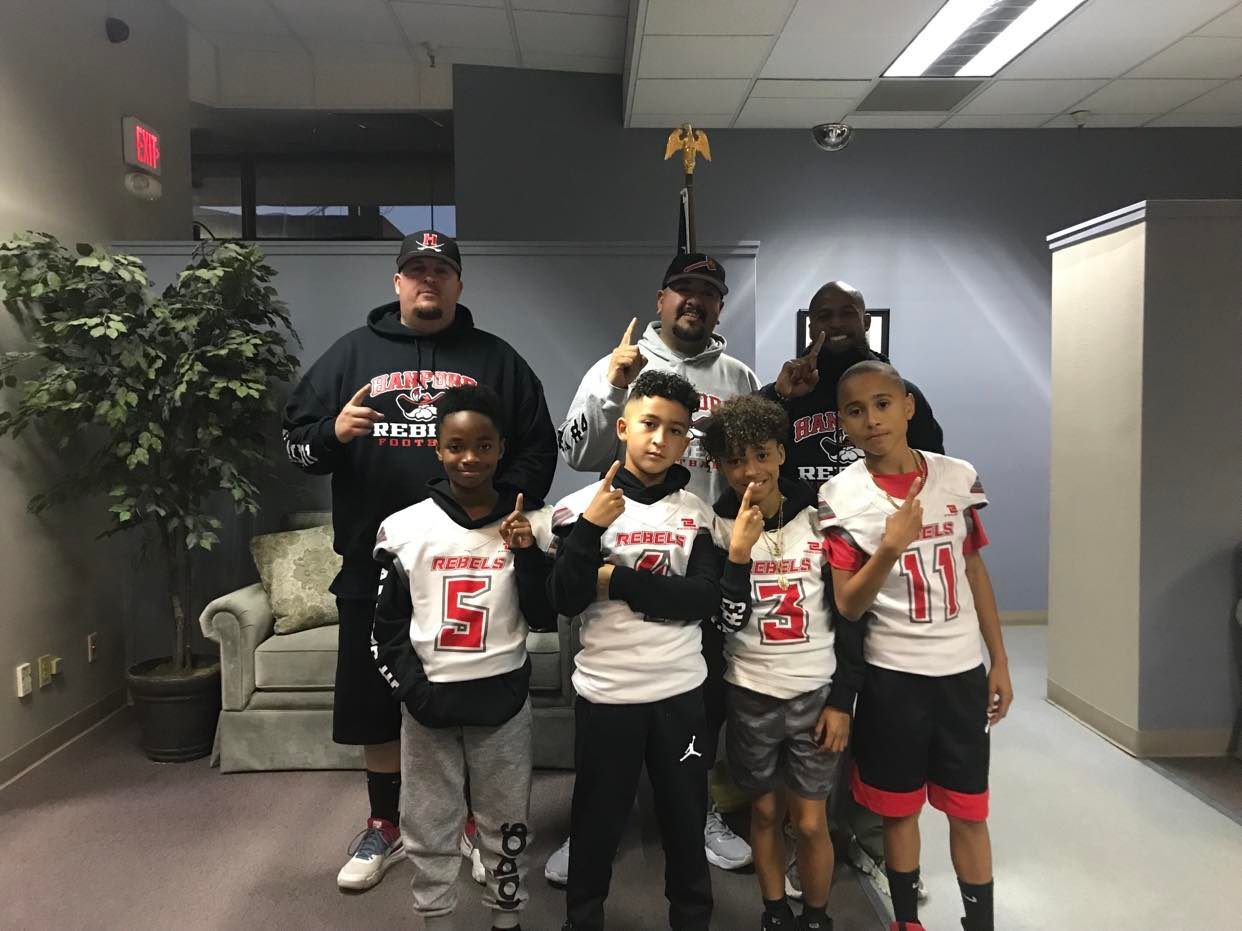 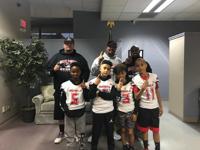 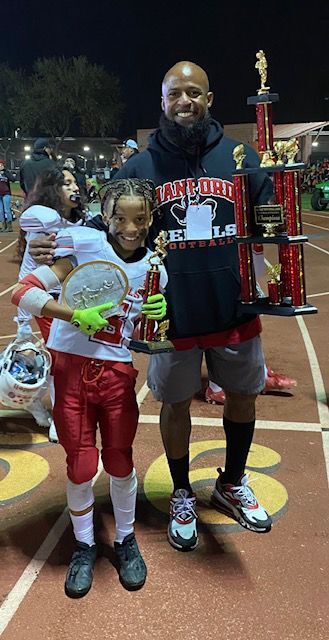 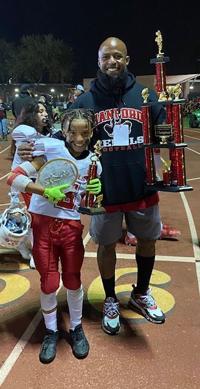 Eugene Chester and his son, Azariah, hold their trophies. Azariah made the game-winning touchdown for the Hanford Rebels and was voted MVP. 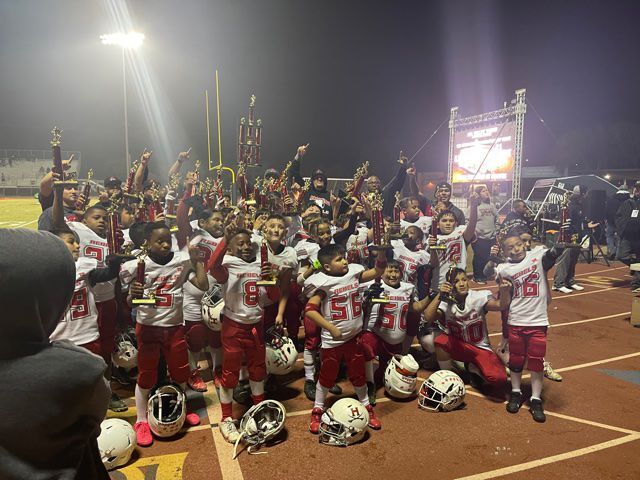 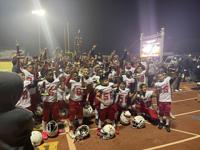 The Hanford Rebels won the All Valley Youth Football Pee Wee Championship, beating the Central Ravens 24-20 with a touchdown near the end of the game.

The Hanford Rebels combined elements of Hanford, Lemoore and Porterville teams to create a championship-winning unit in the All Valley Youth Football circuit.

Eugene Chester and his son, Azariah, hold their trophies. Azariah made the game-winning touchdown for the Hanford Rebels and was voted MVP.

The Hanford Rebels won the All Valley Youth Football Pee Wee Championship, beating the Central Ravens 24-20 with a touchdown near the end of the game.

The Hanford Rebels are the 2021 Division I Pee-Wee Champions for All Valley Youth Football, but this third- and fourth-grade football team’s victory was in the making long before the last, game-winning touchdown.

The team that would take home the trophy for Hanford was actually a hodgepodge — a combination of several teams — coached by several dads, who knew and loved the game.

It started in 2019, when Lemoore Tigers coach Eugene Chester had two encounters with the Porterville Cougars and their coach, Tommy Moisa, Jr. The two teams would end up giving each other their only losses of the season, ultimately meeting in the 2019 Championship, which Porterville would end up winning.

“At that time, that was pretty much when we realized that he had talented kids, good people and everything,” Moisa said of Chester. “We’re those people where after the games, we talk to each other with mutual respect and stuff out of sportsmanship.”

Chester and Moisa saw the potential in each others’ coaching, and the talent in each other’s sons’ gameplay. They were joined by another coach and player-father, Aaron Thomas from Hanford, who suggested they form a team — the new Hanford Rebels.

However, the debut for the Hanford Rebels would be delayed during the COVID-19 pandemic, and they would sit out for the season. But that time would be spent by the Rebels training and honing their skills. Early Saturday mornings and evenings were spent putting the young Rebels through the drills. This included speed, strength and agility, running, throwing, catching, offense and defense to prepare.

It would also give the young players the time they needed to form bonds and develop the winning chemistry a team needs to take home the trophy.

“Obviously, they got more active and more polished as athletes because of all the training, but I feel that all that created the chemistry between them,” Moisa said. “They became family. And it shows when they play together for sure.”

“And we know them so well, we like to do stuff with them. Like this last off-season… training, we all got to know each other better. We’ve been doing everything together since,” said quarterback Tommy Moisa III, Moisa’s son.

According to the coaches, what came out onto the field in 2021 as a result of their practice was a fierce team. They would go undefeated for their first five games before being dealt their first and only loss of the season by the Central Ravens of Fresno. After this loss, they went on another winning streak that lasted all the way to the championships.

For their final match, they faced Central again and according to Chester, they didn’t let the Rebels forget their last encounter, promising a shutout. Meanwhile, the stands, which had previously been tame, went wild for the Rebels-Ravens match.

“We stepped out onto their, onto that field and it was just like a light switch,” Thomas said. “Our game, for some reason, the fans both ways were loud. It was crazy.”

The Rebels took the lead and were ahead throughout the third quarter of the game, but a touchdown in the fourth suddenly put the Ravens on top 20-18. The mood on the Rebels’ side of the field went dark. That’s when the coaches came in to encourage their players not to give up; there was still enough time to retake the lead and win the game.

“From that point, you could see every kid from Hanford’s head just drop like, ‘wow, what just happened?’” Chester said. “But every coach was encouraging them, ‘come on! We got this! We got this! It’s not over! We get the ball back, we can score!’”

An 11th-hour drive for the Rebels would end in a touchdown run by tailback Azariah Chester on the left side, bringing them back up to a lead. Their defense was then able to hold the Ravens on their next possession, letting the Rebels run the clock out for a final victory of 24-20, giving both the trophy — and revenge  — to the Rebels.

Many of the Rebels will be moving on to the fifth- and sixth-grade circuit soon. But the boys are all committed to sticking together.

“We’re going to get stronger, taller, more built — knowing to what to do speedwise, catching throwing and hitting harder,” Azariah said.

When the next season comes around, they’re confident they’ll be ready.