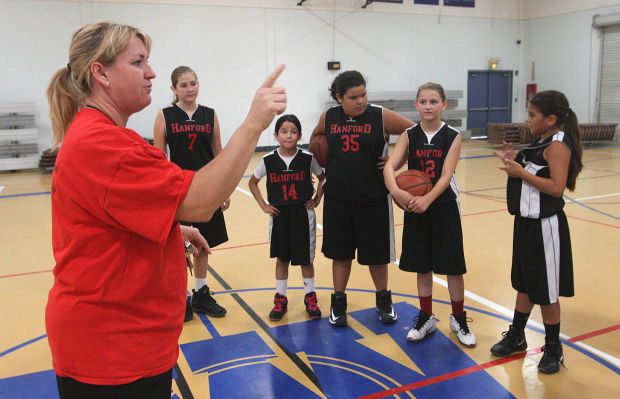 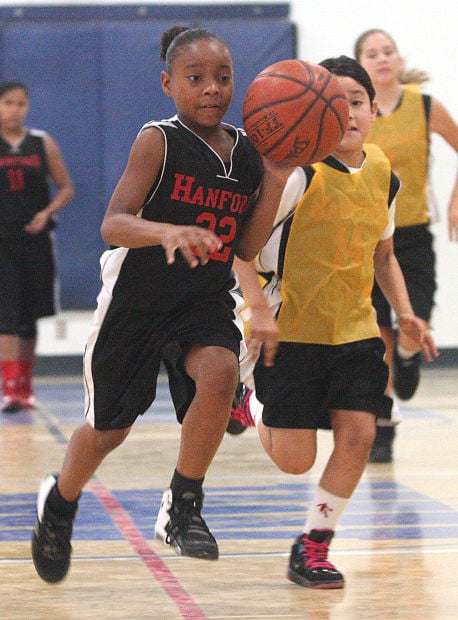 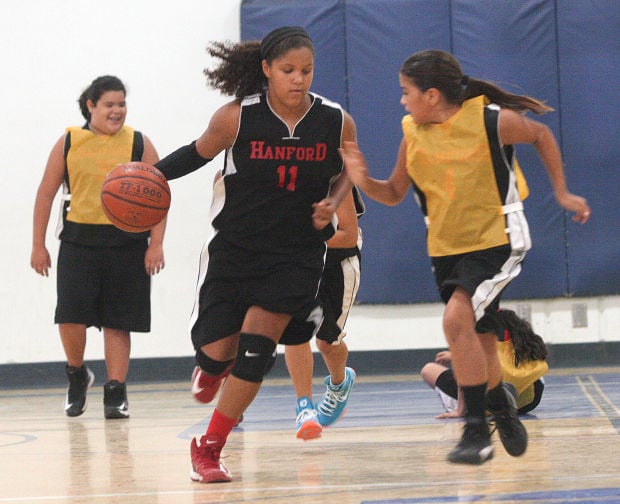 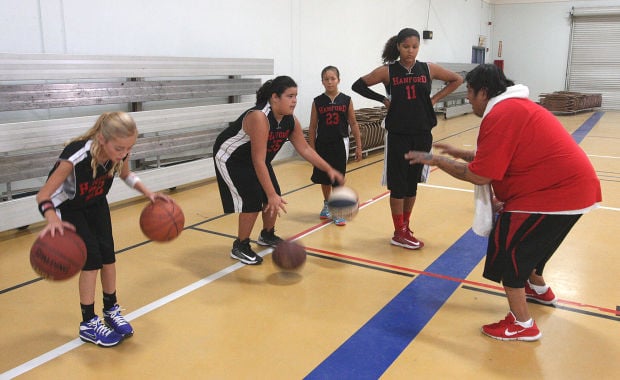 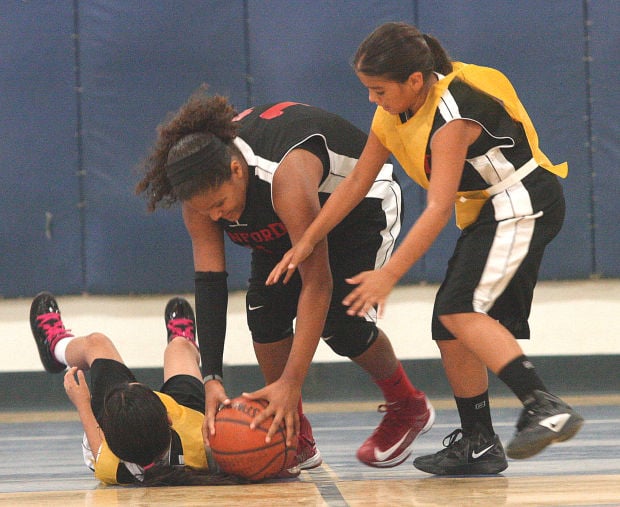 Aliyah Royal (11) grabs for a loose ball during the workout at Woodrow Wilson Junior High in Hanford on Friday morning. (Gary Feinstein/The Sentinel) 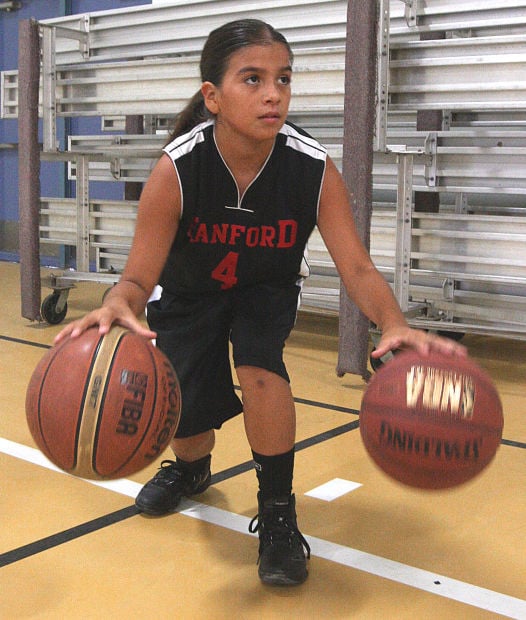 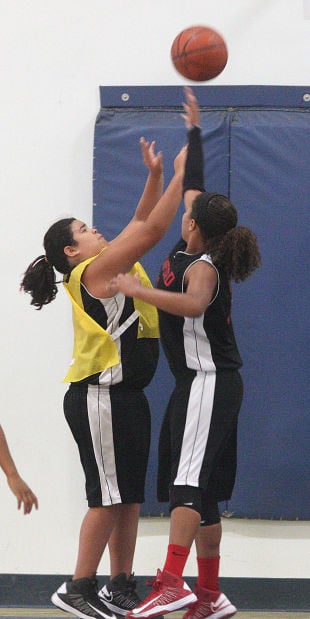 Alyssa Guzman, left, grabs for a rebound during the workout at Woodrow Wilson Junior High in Hanford on Friday morning. (Gary Feinstein/The Sentinel)

HANFORD - For the past two years, the Hanford Nets fifth grade girls basketball team has had a tough time finding a competitive game against teams its own age.

So the team has routinely played up one and two age divisions while staying competitive and is looking ahead toward its biggest challenge yet.

The Nets will travel to Las Vegas this week for the AAU West Coast Nationals in hopes of taking the next step at being competitive at the national level.

Having won titles in Reno, Nev., and more than 10 tournaments locally, some of which were playing in divisions of teams a year or two older, the Nets are looking forward to facing some of the best competition it will have seen to date.

All those games against older teams, has been for a reason. While the Nets lost by big margins early on, the work is starting to play its dividends.

“We try and play up so we can get better,” said Nets head coach Michelle Adams. “There was a time where they’d stop the clock on us. Those loses were character building losses.”

Adams sees potential in a squad that others, she said, dread having to play in local tournaments.

Having a daughter play at the varsity level in high school recently, she believes some of her players already have the ball handling and shooting skills that are as good - or better - as high schoolers.

And that has come with the determination the players have put into the game, Adams said.

“Basketball is my whole life,” said Nets player Aliyah Royal, who leads the team in scoring. “I couldn’t do anything without it.”

Royal is an example of the reasons the Nets have been able to play up in age divisions. While attending a summer camp at Fresno Pacific, Royal - who is already 5-11 -  outplayed others her own age by so much, she was thrown in with high school players and held her own.

While they get to play a game they love, Adams said she’s grown to have big bond with her players. Since they’re all virtually the same age, she dreads the day they all graduate and get married around the same time.

“It’s like I have 12 daughters,” she said. “When they graduate and get married, I tell them I’m going to be a broke woman.”

While the Nets will play five games in four days at the West Coast Nationals, it could help the team get exposure for sponsorships that could help will travel costs, jerseys and fundraising.

Adams hopes that sooner or later, the team will be able to compete at the AAU national championships, which would cost about $20,000, she said.

But Adams wants to make sure that every girl gets a chance to play. She doesn’t charge a fee to be on the team like most travel teams do and just has players divvy up tournament costs after fundraising.

“I’ll never turn away a kid because they can’t afford to pay,” Adams said.

The biggest thing the team has striven for, is coming together. Adams sees it as an honor that parents will trust her with their daughters. For the trip to Las Vegas, Adams will drive nearly half of the team in her own what will be crowded car.

While some youth teams don’t keep track of statistics as well as Adams does, she uses it to show it to the team as a tool. Just flipping through her scorebook, she can show players the importance of everyone doing their job in a team atmosphere.

“You’ll look at the teams we go against,” Adams said. “Only one or two of their girls can really play and will score all their points. But when you look at our team, everybody is scoring. There’s a lot of times where all the players on our bench are better than every player on the other team.”

While she’s enjoyed playing on the team, Kolbi Adams, the team’s top 3-point shooter, has liked other aspects of being on the team as well.

Aliyah Royal (11) grabs for a loose ball during the workout at Woodrow Wilson Junior High in Hanford on Friday morning. (Gary Feinstein/The Sentinel)

Alyssa Guzman, left, grabs for a rebound during the workout at Woodrow Wilson Junior High in Hanford on Friday morning. (Gary Feinstein/The Sentinel)