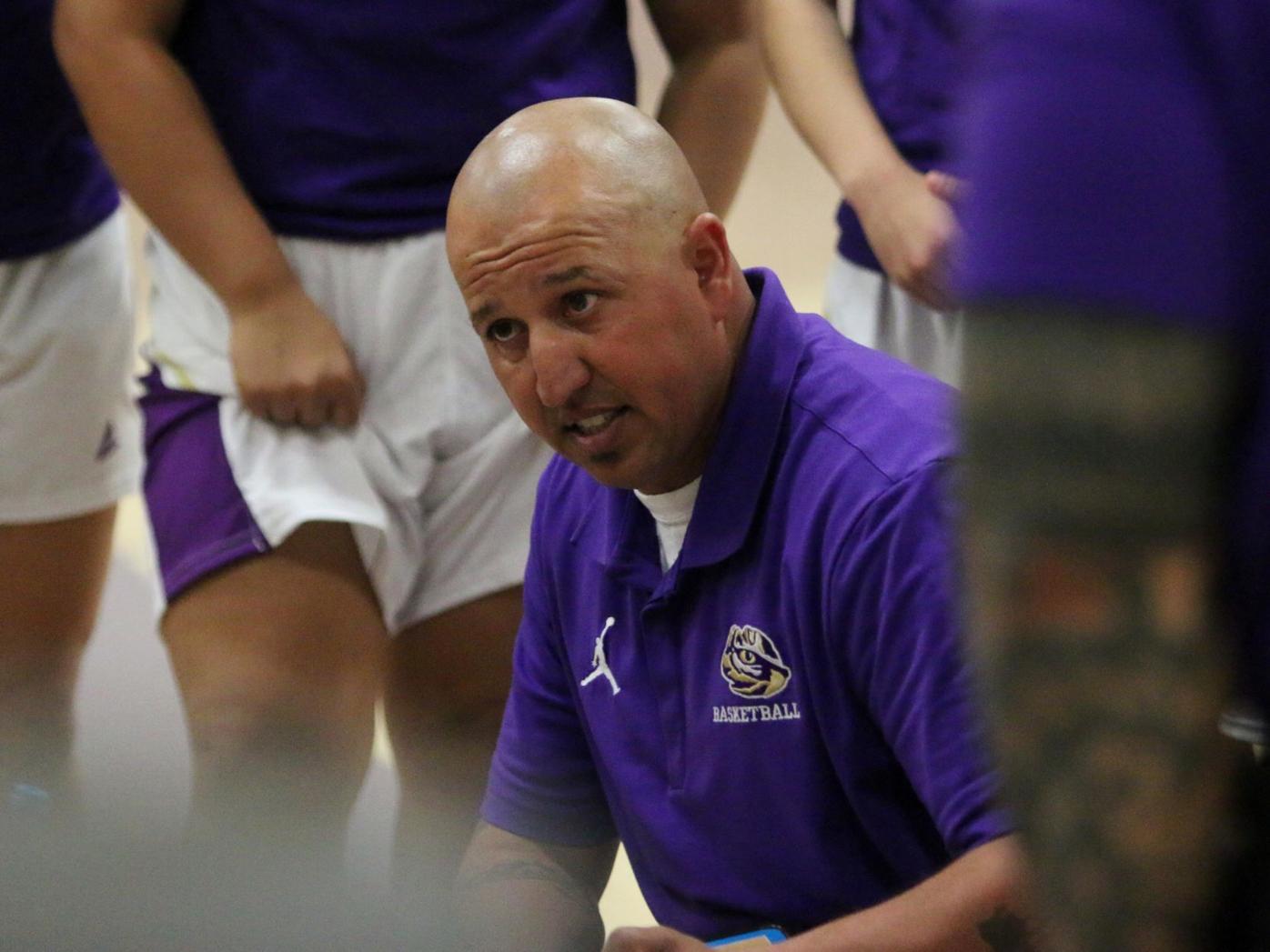 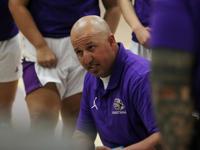 In this Feb. 19, 2020, Sentinel file photo, Lemoore coach Marco Vazquez talks to his team during the fourth quarter of a CIF Central Section Division III first-round game against Fresno at Lemoore High School. Vazquez was voted the All-West Yosemite League Coach of the Year. 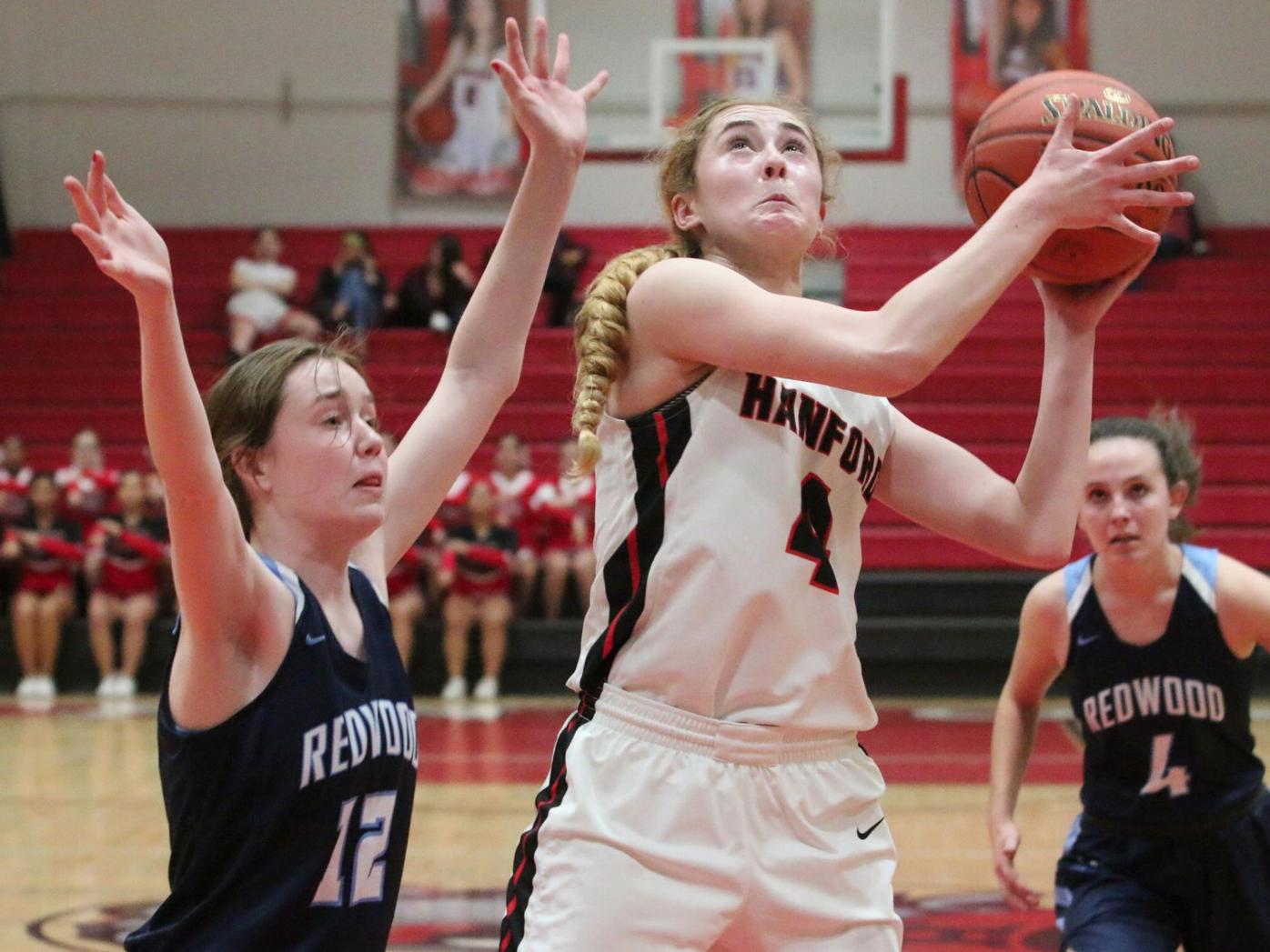 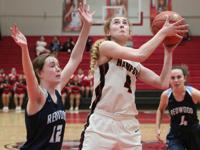 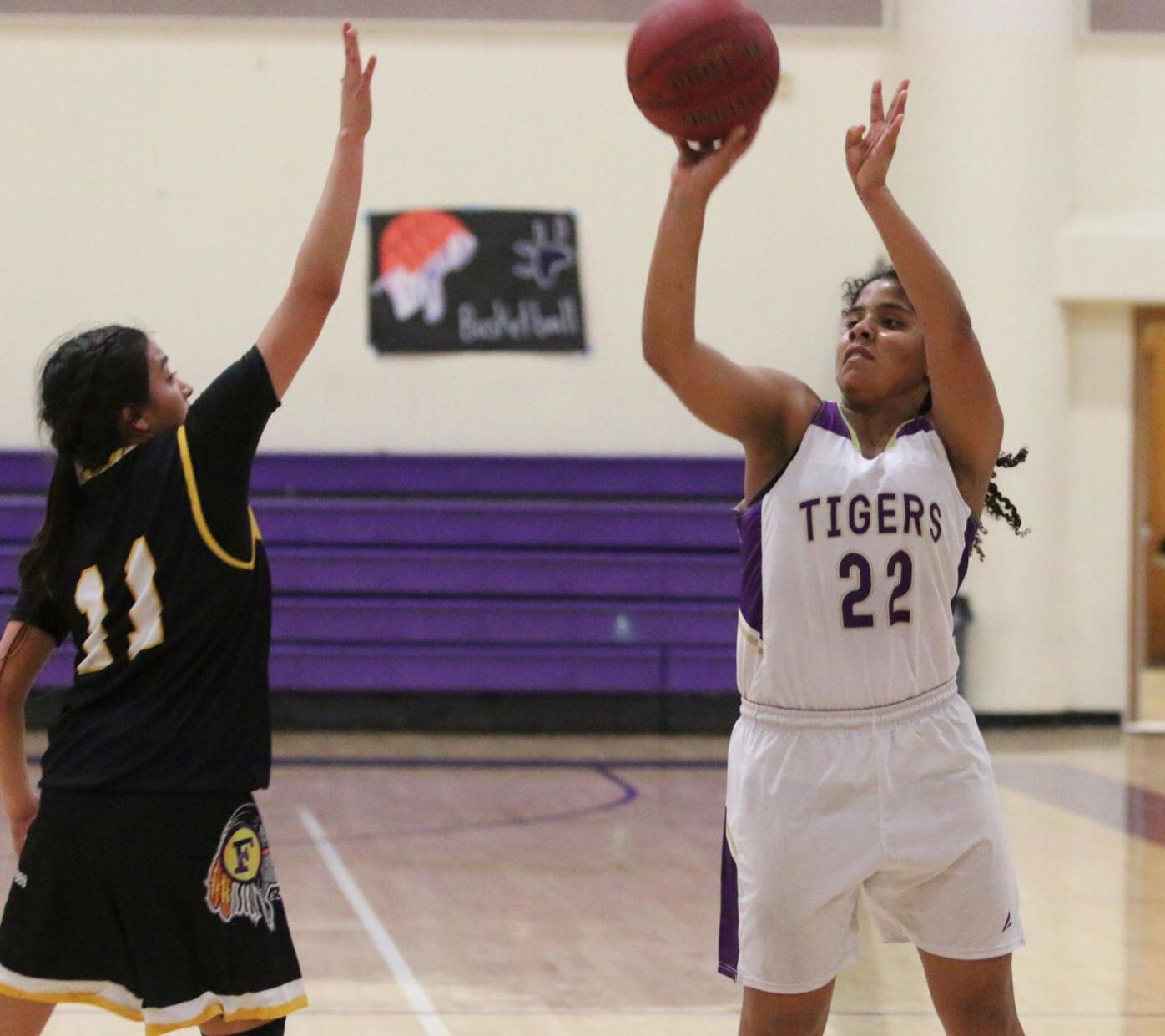 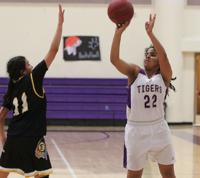 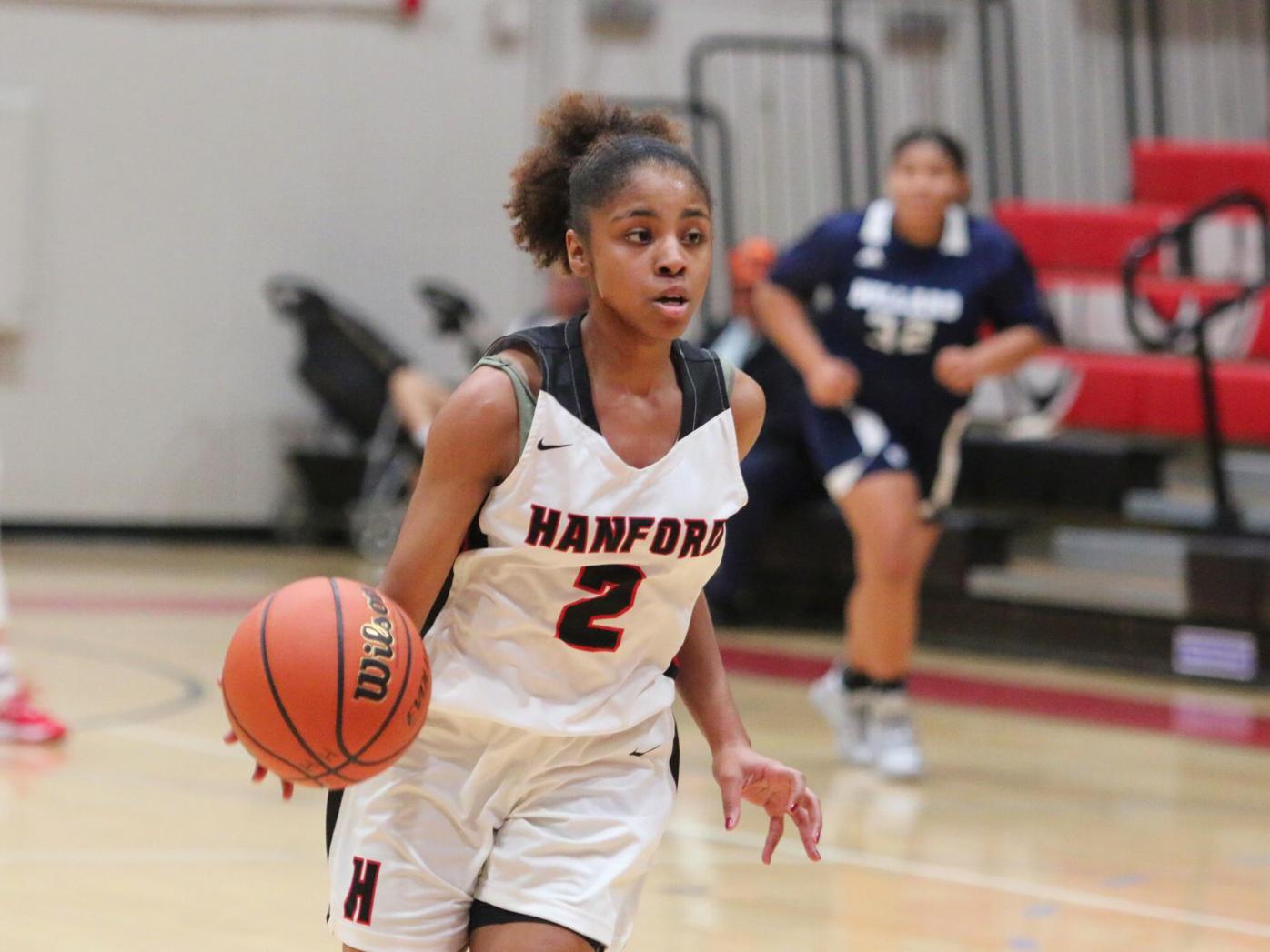 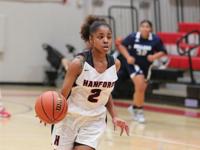 In this Jan. 6, 2020, Sentinel file photo, Hanford’s Tinisha Edwards leads the fast break during the second quarter of a non-league game against Bullard at Hanford High School. Edwards was voted to the All-West Yosemite League First Team. 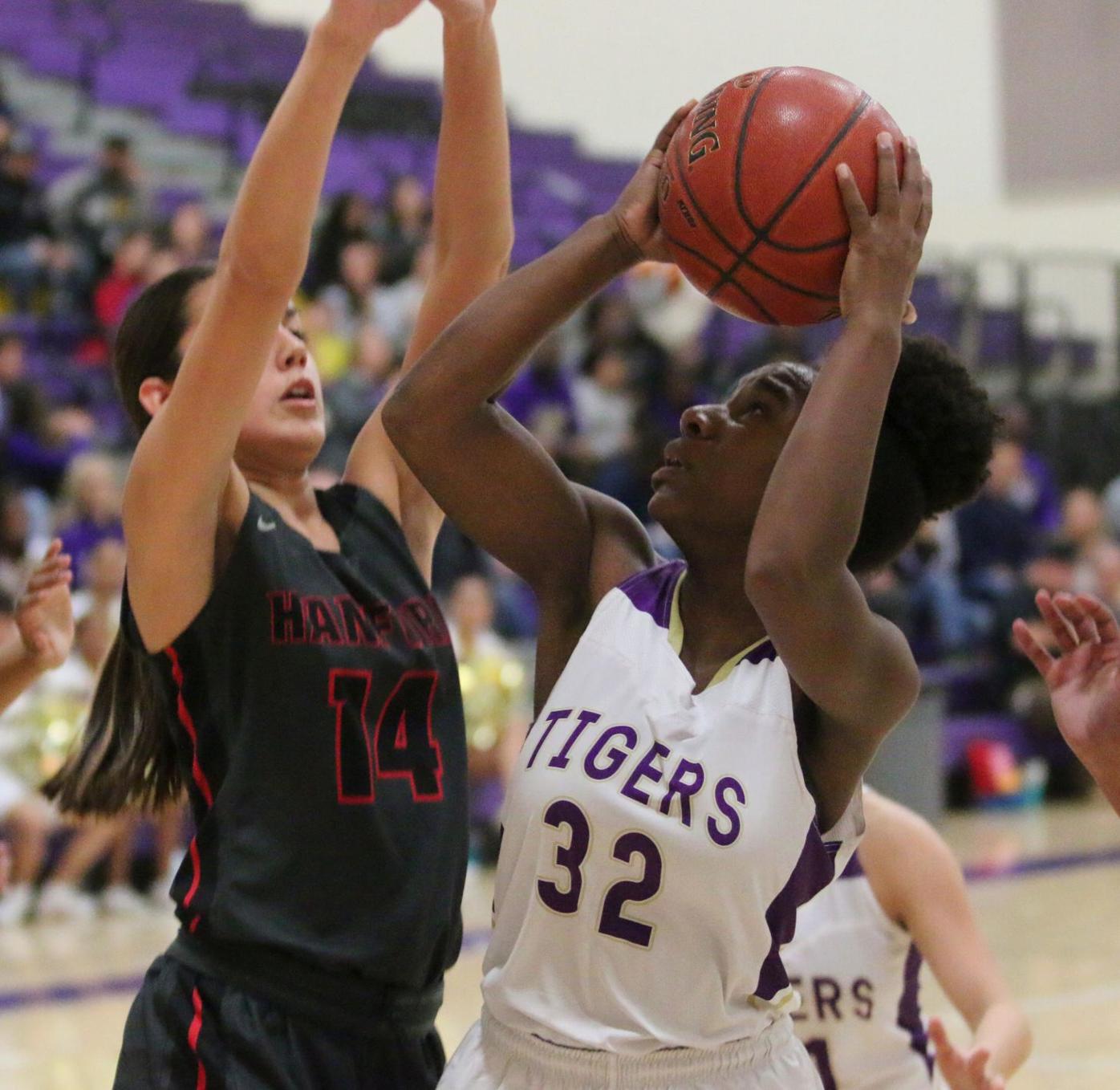 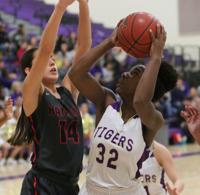 In this Feb. 19, 2020, Sentinel file photo, Lemoore coach Marco Vazquez talks to his team during the fourth quarter of a CIF Central Section Division III first-round game against Fresno at Lemoore High School. Vazquez was voted the All-West Yosemite League Coach of the Year.

In this Jan. 6, 2020, Sentinel file photo, Hanford’s Tinisha Edwards leads the fast break during the second quarter of a non-league game against Bullard at Hanford High School. Edwards was voted to the All-West Yosemite League First Team.

After a remarkable turnaround season, Lemoore girls basketball coach Marco Vazquez was voted Coach of the Year in the West Yosemite League.

“Accountability was huge, so it wasn’t really me that did it,” first-year head coachVazquez said. “It was being able to have the right coaching staff, the right coaches in every age group and then just the girls doing what we ask when we put in our system of what we did. I couldn’t have done all that stuff without having that coaching staff. I really think it should be Coaching Staff of the Year.’”

His coaching staff consisted of assistant varsity coach Angel Solis, junior varsity head coach Ricardo Boodrum and freshman head coach Kris Mangyoa. They helped guide the Tigers, who had a total of seven WYL victories over the past two seasons, including a 3-7 finish in 2018-19, to a second-place finish at 7-3.

It was their best finish since the 2011-12 season when they went 9-3 and also ended in second.

“It helps the next group of kids see that the system works if you buy in,” Vazquez said. “If you buy in, we’ll get good results.”

The proof was in the numbers for the 2019-20 season. According to MaxPreps, Vazquez transformed the offense from 40.5 points per game during the 2018-19 season to 58.8 ppg this past season. The +18.3 differential was the most among any WYL team.

The same was true for the team’s defense, which hounded opponents and limited them to nearly 10 points less than the previous year. The numbers went from allowing 54.6 ppg to 45 ppg or a -9.6 ppg differential, which also the best in league.

“We had talent. We didn’t have as much as some teams,” Vazquez said. “What we just did was we just outgrinded people. On defense, you don’t need the greatest talent in the world. On defense, you need heart and hard work … and defense wins championships. And that’s what we’re going to try to install for these next coming years.”

The Tigers (16-12, 7-3 WYL) also won four more games in the WYL than last season, which was another league-best, and qualified for the playoffs for the first time in four seasons.

“This year was the foundation year. The foundation of changing the culture and that’s huge because the culture that’s carried inside that gym it’s kind of installed in their brains and we try to get them to carry it all day,” Vazquez said. “If they hold that same type of expectation in class, in school and hold each other accountable, it leads easily onto the basketball court because now it comes naturally.”

Lemoore lost in the first round of the CIF Central Section Division III playoffs, but set the tone for the future. Some of the players that helped make the Tigers into a playoff-caliber team were Amaya Sanchez and Kyla Wiley who were both voted to the First Team.

Sanchez was the second-leading scorer in the WYL at 15.2 ppg, while Wiley was third at 14.8 ppg. Sanchez was also second in rebounds per game (9.8) and Wiley led the league in free throws made (30).

Nyomi Solis finished in the top 10 in scoring (7.7) and Amber Cole was 11th in rebounding at 1.8. Both were voted to the Second Team.

For the Bullpups, they won a 15th consecutive WYL crown and finished undefeated in league for a fourth consecutive year. They were 10-0 and have now won 49 WYL games in a row.

Tinisha Edwards was voted to the First Team after tying for a league-best four assists per game and was second with 4.9 steals per game. Corin Camara, who also made First Team, led all WYL scorers with 18 ppg and led everyone with 29 made 3-pointers. Her 37% from the 3-point line was also best among all shooters.

Kylie Maya led the league with 51% shooting, Michaela Young was eighth in scoring at 9.3 ppg, and Alyssa Chapman tied for first with four assists per game. All three were voted to the Second Team.