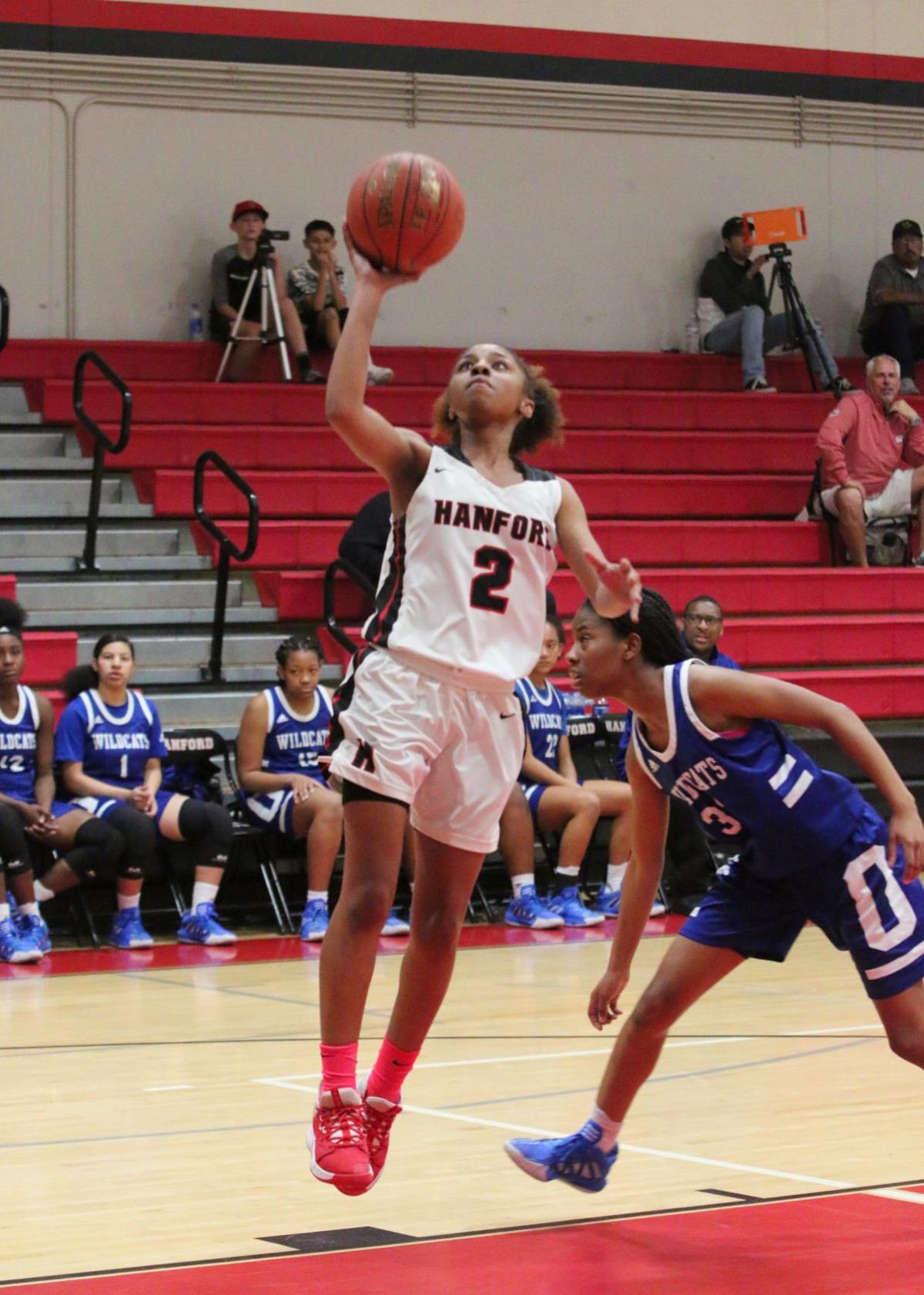 Hanford’s Tinisha Edwards goes up for a layup during the first quarter of the CIF State Division IV first round against Oakland at Hanford High School on Tuesday. Edwards scored 11 points and Hanford won 78-65. 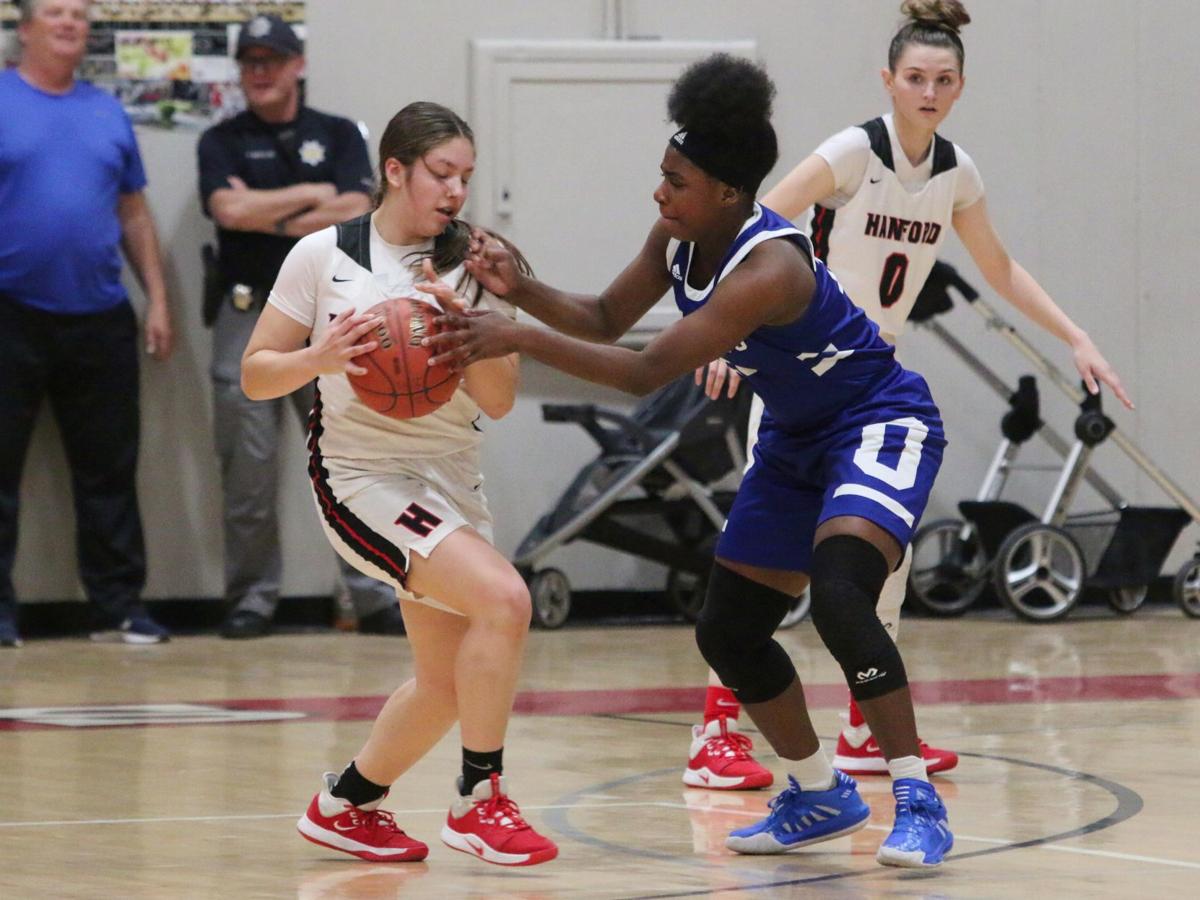 Hanford’s Alyssa Chapman rips the ball away during the second quarter of the CIF State Division IV first round against Oakland at Hanford High School on Tuesday. 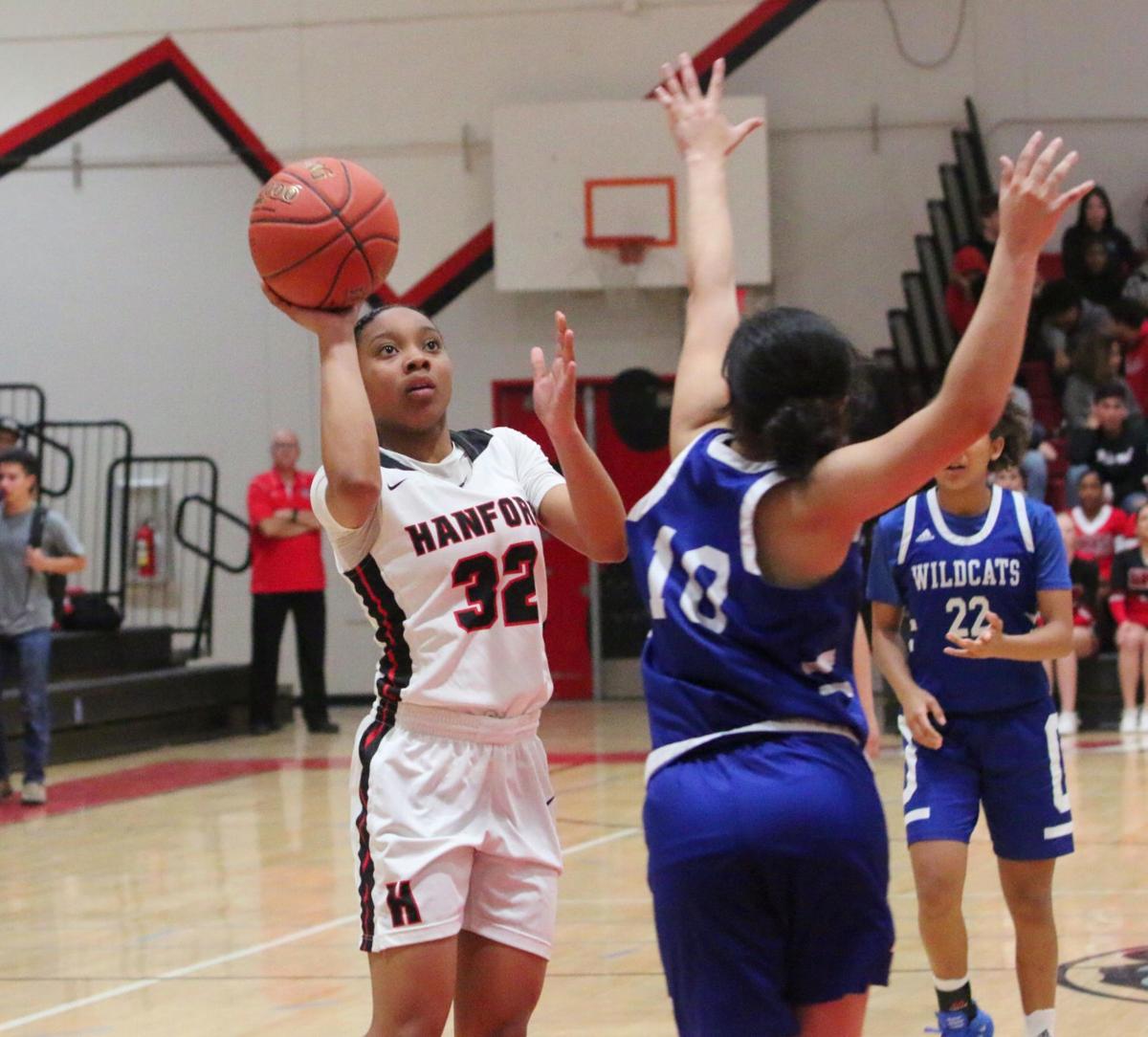 Hanford’s Michaela Young shoots during the fourth quarter of the CIF State Division IV first round against Oakland at Hanford High School on Tuesday.

HANFORD — It’s been six long years, but Hanford girls basketball finally has another state playoff win under its belt.

Behind strong performances by Michaela Young, Kolbi Adams, Alyssa Chapman and Tinisha Edwards, No. 3 seed Hanford defeated No. 14 seed Oakland 78-65 at home in the first round of the CIF State Division IV playoffs on Tuesday.

“At this point, it’s go big or go home,” Adams said. “If we lose, we’re out so we just got to play good, we got to play together as a team. If we keep up the offensive movement and the talking on defense, I think we’re going somewhere.”

Adams, along with Young, Chapman and Edwards, all came up big and finished in double figures. Young scored a team-high 23 points, while Adams added 16 points with five 3-pointers. Alyssa Chapman scored 15 points and Tinisha Edwards had 11 points.

Behind Adams’ accurate shooting from behind the arc, Hanford overcame a slow start. The senior guard was 4-for-5 from the 3-point line in the first half and helped the Bullpups turn a 19-6 first-quarter deficit into a 34-33 lead at halftime.

“For me, it’s keeping the team together and playing as a unit is important, especially when we’re in a slump like we were,” Adams said. “Communicating and believing in my teammates is a key thing for this.”

Hanford led 4-2 in the opening minutes, but allowed Oakland to go on a 12-0 run and take a 14-4 lead. The Bullpups missed easy layups and open shots badly.

It was a complete 180 in the second quarter as the Bullpups doubled up the Wildcats and outscored them 28-14 in the quarter.

“It’s literally just moving the ball, moving your body,” Pitkin said about the second-quarter turnaround. “They run a really nice, it looked like, a little hybrid 1-3-1 zone. They were packing in the middle and our corners just had to understand when the ball swings away to the weak side, they got to knife to the basket. Once we started moving to the basket, our cutters became open, which opened up some outside shots.

“It’s literally just Basketball 101. Its spacing, its movement, its fluidity, its sharing the ball and finding the right shot at the right time.”

Another strong opening to the third quarter, this time an 8-2 run, allowed the Bullpups to take control of the game. Young scored seven points in the quarter and 13 of her 23 in the second half.

The Bullpups led 56-47 entering the fourth quarter, but quickly regained their double-digit lead when Chapman hit a 3-pointer. The Wildcats managed to cut the lead to nine on a free throw with 4:03 to go, but the Bullpups allowed them to get no closer.

“We knew we had to put pressure on them and we couldn’t let them come back, so we just ran up the score and we had to use our fresh legs to have the momentum, keep going,” Chapman said.

Chapman scored 10 of her 15 points in the fourth, including two 3-pointers, and attributed it to her teammates.

“Just to take the open shots that my teammates were feeding me,” Chapman said. “We had to move on offense and I was trying to find those open gaps so I could finish easily.”

Amarys Cuellar, who finished with six points, scored on a baseline jumper and Young finished in the paint on the next two possessions to quickly reestablish the lead.

“It’s going to take total desire to win, unmitigated desire and refusal to lose,” Pitkin said. “It will have to take everyone wanting the same thing, pushing in the same direction. It can’t be any me ball or hero ball, it’s got to be ball movement, aggressive defense. I think we’re ready for that one.”

With another season of girls soccer in the books, the East Sequoia League awards were released with Sierra Pacific leading the way in selectio…

The West Yosemite League, including local high schools Hanford and Lemoore, has suspended spring sports until further notice due to the corona…

With another season of girls soccer in the books, the East Sequoia League awards were released with Sierra Pacific leading the way in selectio…

After a remarkable turnaround season, Lemoore girls basketball coach Marco Vazquez was voted Coach of the Year in the West Yosemite League.

JACKSON — Sierra Pacific went on the road on Saturday and upset No. 2 seed Argonaut 62-42 to advance to the CIF State Northern Regional Champi…

Hanford’s Tinisha Edwards goes up for a layup during the first quarter of the CIF State Division IV first round against Oakland at Hanford High School on Tuesday. Edwards scored 11 points and Hanford won 78-65.

Hanford’s Alyssa Chapman rips the ball away during the second quarter of the CIF State Division IV first round against Oakland at Hanford High School on Tuesday.

Hanford’s Michaela Young shoots during the fourth quarter of the CIF State Division IV first round against Oakland at Hanford High School on Tuesday.