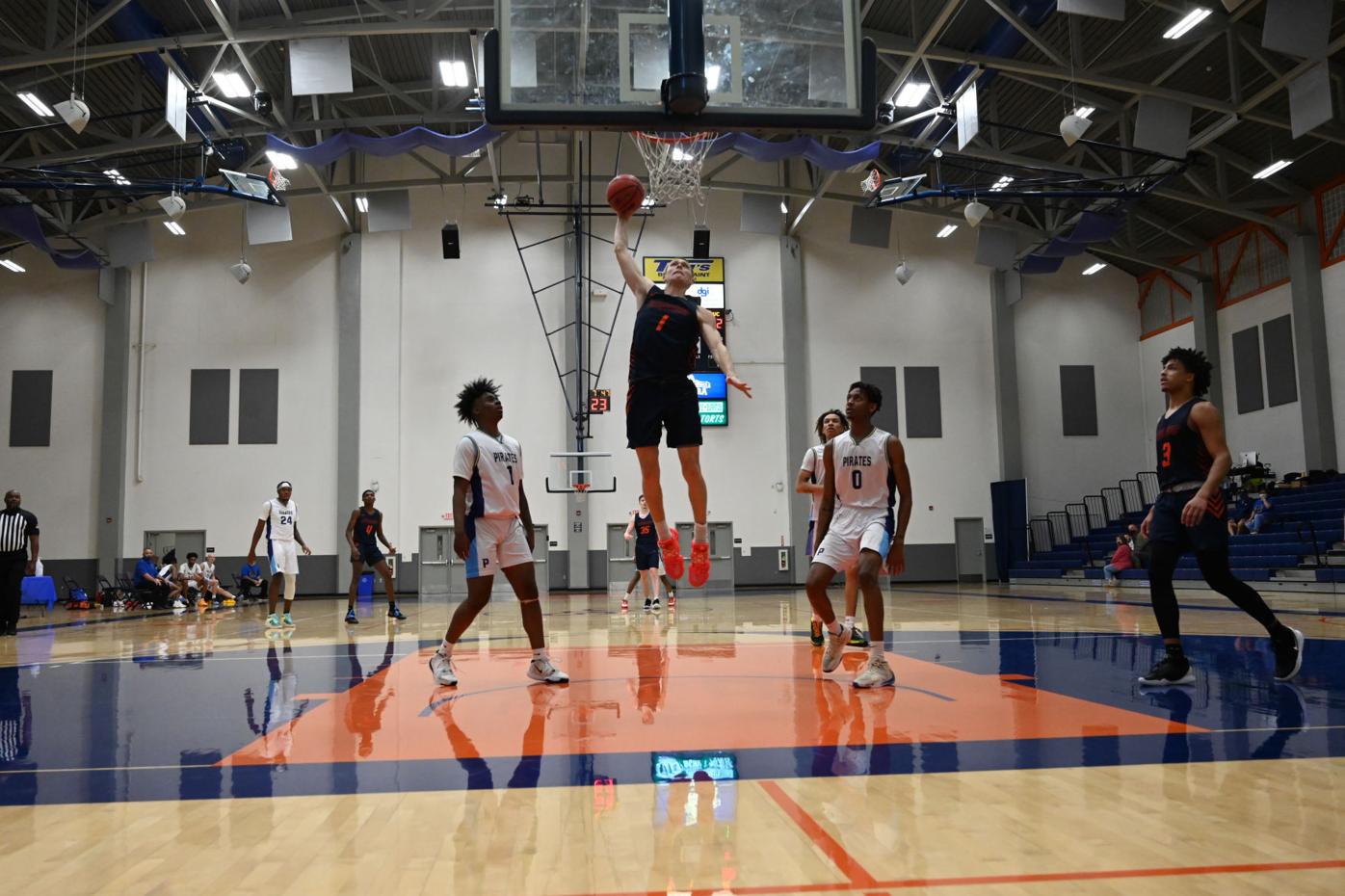 Ryan Johnson (No. 1) dunks on the Pirates. 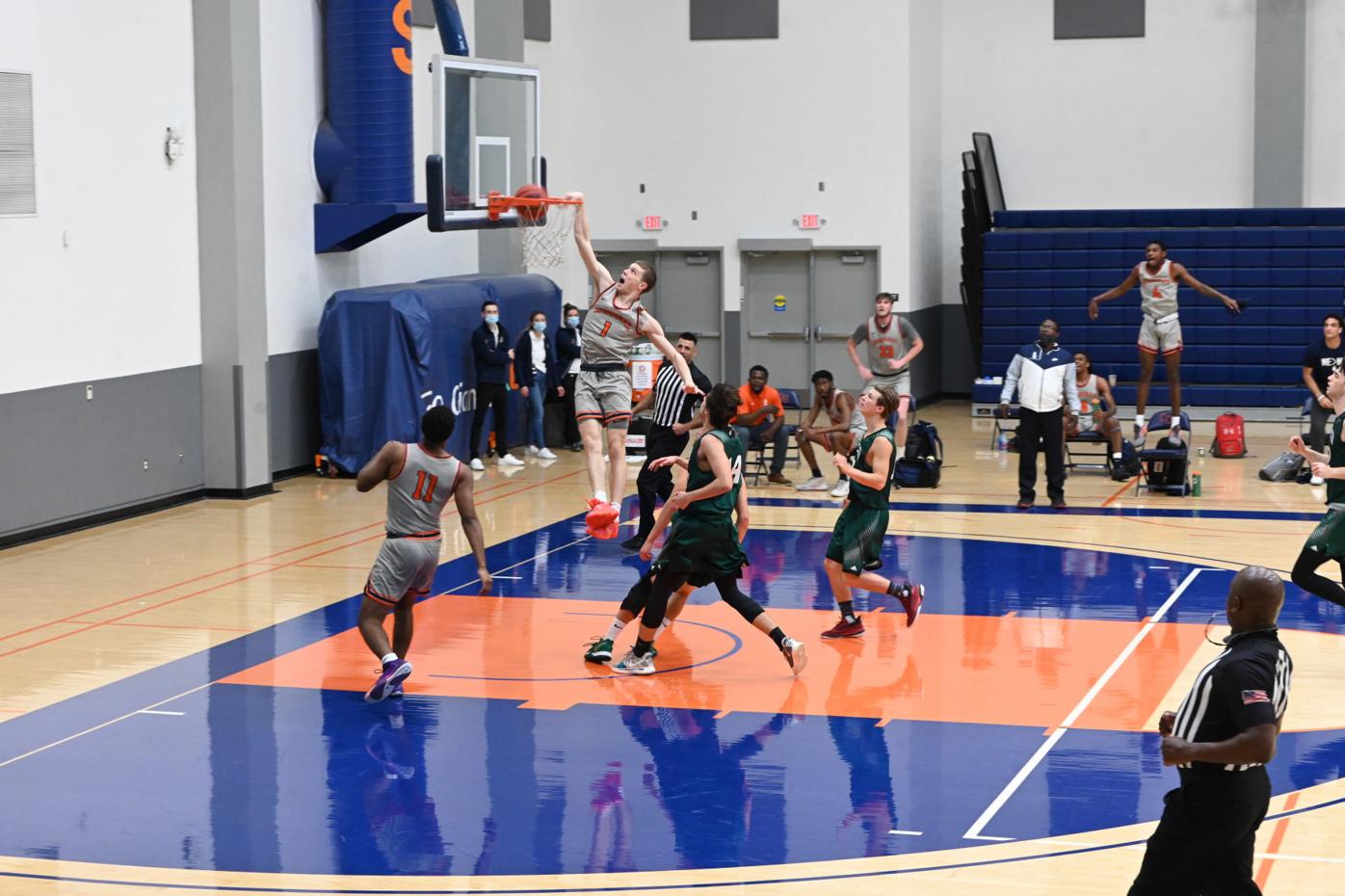 COS' Ryan Johnson dunks during a game to the delight of the bench.

Ryan Johnson (No. 1) dunks on the Pirates.

COS' Ryan Johnson dunks during a game to the delight of the bench.

Ryan Johnson arrived at College of the Sequoias in the fall of 2018 as a football-playing quarterback.

He departs in the spring of 2021 as a basketball-playing guard-forward combo with the opportunity to continue his academic and athletic career at the four-year university level.

The former Hanford High standout has committed to play basketball at NCAA Division II Stanislaus State of Turlock after two standout seasons with the Giants.

"RJ was incredible during his time at COS," Sequoias coach Dallas Jensen said. "Being able to see his growth and maturation as a player, student and person was amazing. I'm beyond proud of him for his accomplishments on and off the floor."

After one of the most decorated athletic careers at Hanford — he was a member of four Central Section title teams between football and basketball, including the 2015 CIF State Division IV-AA football champions — Johnson signed to play football at Division I San Jose State.

Johnson was a redshirt freshman for the Spartans in 2017 before deciding to return closer to home and play football for Sequoias.

He played in eight games while passing for 842 yards and eight touchdowns for the Giants football team in 2018 before suffering the second major knee injury of his athletic career, the first happening six snaps into his senior season of football in high school.

At that point, Johnson decided to give up football and focus on basketball, where he was a key recruit for Jensen entering his first season at Sequoias in 2019-2020.

Johnson would help the Giants go 24-6 overall and reach the California Community College Athletic Association's Elite Eight championship tournament before it was canceled because of COVID-19 pandemic safety precautions.

"He made the program better, his teammates better, and definitely made his coaches look a lot better than we really are," Jensen said.

Johnson transfers to Stanislaus State with two seasons of basketball eligibility remaining. The Warriors went 15-13 overall and 11-11 in the California Collegiate Athletic Association in 2019-2020. Stanislaus State did not compete in 2020-2021 because of COVID-19 safety concerns.

"Stanislaus State did an incredible job throughout the entire recruitment process," Jensen said. "They're getting a great teammate who competes at a high level. RJ has the ability to defend multiple positions, he rebounds at an elite level out of the swing position and can score it at all three levels. I'm confident he'll be an impact player right away."

Johnson comes from a basketball playing family. His father, Sandy, played college basketball at Humboldt State; his older sister, Brooke, played at UNLV before moving on to play professionally in Greece; and a cousin, Sydnee Fipps, played at UC Davis.

Johnson is the seventh player since Jensen took over at Sequoias and the second this season to move on to the four-year level. Ayo Aderoboye (Nigeria) committed to NCAA Division II Holy Names of Oakland in January. Amil Fields (Hayward) also is expected to sign with a four-year school after averaging 9.0 points, 3.1 rebounds and 1.6 assists per game last season. He averaged 10.2 points, 4.6 rebounds and 1.5 assists in 2019-2020.

"As a coaching staff, we love working with young men at this level," Jensen said. "Everyone has a reason for being here. Our job is to help them continue their growth and development, see them graduate, and get them moved on to the next level to get their education paid for. That is what we do. We feel like College of the Sequoias, our administration and our coaching staff provide the academic support, exposure and development in all facets of life — as a player, student and person.

"We also take pride in the ability to develop genuine relationships with our players that help provide a healthy environment and opportunity for these young men to reach their goals and dreams in life on and off the floor."