MIAMI (AP) — Don Shula, who won the most games of any NFL coach and led the Miami Dolphins to the only perfect season in league history, died Monday at his home, the team said. He was 90.

Shula surpassed George Halas' league-record 324 victories in 1993. He retired following the 1995 season with 347 wins, 173 losses and six ties, and was inducted into the Pro Football Hall of Fame in 1997.

"Don Shula was the patriarch of the Miami Dolphins for 50 years," the Dolphins said in a statement. "He brought the winning edge to our franchise and put the Dolphins and the city of Miami in the national sports scene."

Shula became the only coach to guide an NFL team through a perfect season when the 1972 Dolphins went 17-0. They won the Super Bowl again the following season, finishing 15-2.

The 2007 Patriots came close to matching the achievement by the '72 Dolphins, winning their first 18 games before losing in the Super Bowl to the New York Giants.

During his 26 seasons in Miami, Shula became an institution and looked the part, with a jutting jaw and glare that intimidated 150-pound sports writers and 300-pound linemen alike. His name adorns an expressway, an athletic club and a steakhouse chain.

Shula's only losing seasons came in 1976 and 1988, but he drew increasing criticism from fans and the media in his final years and retired in January 1996, with Jimmy Johnson replacing him.

Shula's active retirement included plenty of travel and social events, but in 2000 he admitted he missed coaching.

"When you do something for 26 years with an organization and have all the memories — some not so great, but mostly great memories — that's when you miss it," he said.

Before his 1970s triumphs with Miami, Shula had a reputation as a coach who thrived during the regular season but couldn't win the big games.

Shula became the youngest head coach in NFL history when the Baltimore Colts hired him in 1963 at age 33. The Colts finished 12-2 the following season and were widely seen as the league's dominant team.

But they lost 27-0 to Cleveland in the title game, and for the next few years they continued to come up short.

The humiliation was greatest in the Super Bowl to end the 1968 season. The Colts steamrolled through the NFL, finishing 13-1 and outscoring opponents by a nearly 3-1 margin. After crushing the Browns 34-0 in the title game, they were overwhelming favorites to defeat the Jets of the upstart American Football League, which had lost the first two Super Bowls.

But the Colts lost 16-7, blowing numerous scoring opportunities and allowing Jets quarterback Joe Namath to control the game. The result is still regarded by many as the biggest upset in pro football history, and it contributed to Shula's departure from Baltimore after the 1969 season.

In 1970, following the NFL-AFL merger, Shula joined the Dolphins, a fourth-year AFL expansion team that had gone 3-10-1 the previous year.

Miami improved to 10-4 in his first season and made the playoffs for the first time, and the 1971 Dolphins reached the Super Bowl before losing to Dallas. The following season, when Miami took a 16-0 record into the Super Bowl against Washington, Shula considered his legacy on the line.

"If we had won 16 games in a row and lost the Super Bowl, it would have been a disaster, especially for me," he said in a 2007 interview. "That would have been my third Super Bowl loss. I was 0-2 in Super Bowls and people always seemed to bring that up: 'You can't win the big one.'"

The Dolphins beat the Redskins 14-7, then repeated as champions the following year by beating Minnesota in the title game.

The post-Shula era in Miami has only magnified his achievements. More than two decades after he retired, the Dolphins haven't been back to an AFC championship game, much less a Super Bowl.

Five times under Shula, the Dolphins had a winning streak of at least seven games. They haven't had one since.

Shula was about more than winning. He supported many charities, and the Don Shula Foundation, formed primarily to assist breast cancer research, was established as a tribute to his late wife, Dorothy.

They were married for 32 years and raised five children before she died in 1991. Shula married Mary Anne Stephens during a bye week in 1993.

His oldest son, David, coached the Cincinnati Bengals from 1992-96. When Cincinnati played Miami in 1994, it marked the first time in professional sports that a father and son faced each other as head coaches.

Another son, Mike, is a longtime NFL assistant coach and was head coach at Alabama in 2003-06.

Shula spent more than 20 years on the powerful NFL Competition Committee, which evaluates playing rules as well as regulations designed to improve safety.

"If I'm remembered for anything, I hope it's for playing within the rules," Shula once said. "I also hope it will be said that my teams showed class and dignity in victory or defeat."

Born Jan. 4, 1930, in Grand River, Ohio, Shula was raised in Painesville, Ohio. He played running back at John Carroll University in Cleveland and cornerback in the pros for seven seasons with Cleveland, Baltimore and Washington.

He entered coaching as an assistant at Virginia in 1958.

Near the end of his career, Shula's biography in the Dolphins' media guide began with a quote from former NFL coach Bum Phillips: "Don Shula can take his'n and beat you'n, and he could take you'n and beat his'n."

Shula is survived by his second wife, two sons and three daughters.

Photos: Don Shula through the years

The Sierra Pacific girls basketball team celebrated the 2019-20 season with a drive-thru parade, awards ceremony and the unveiling of some championship rings. 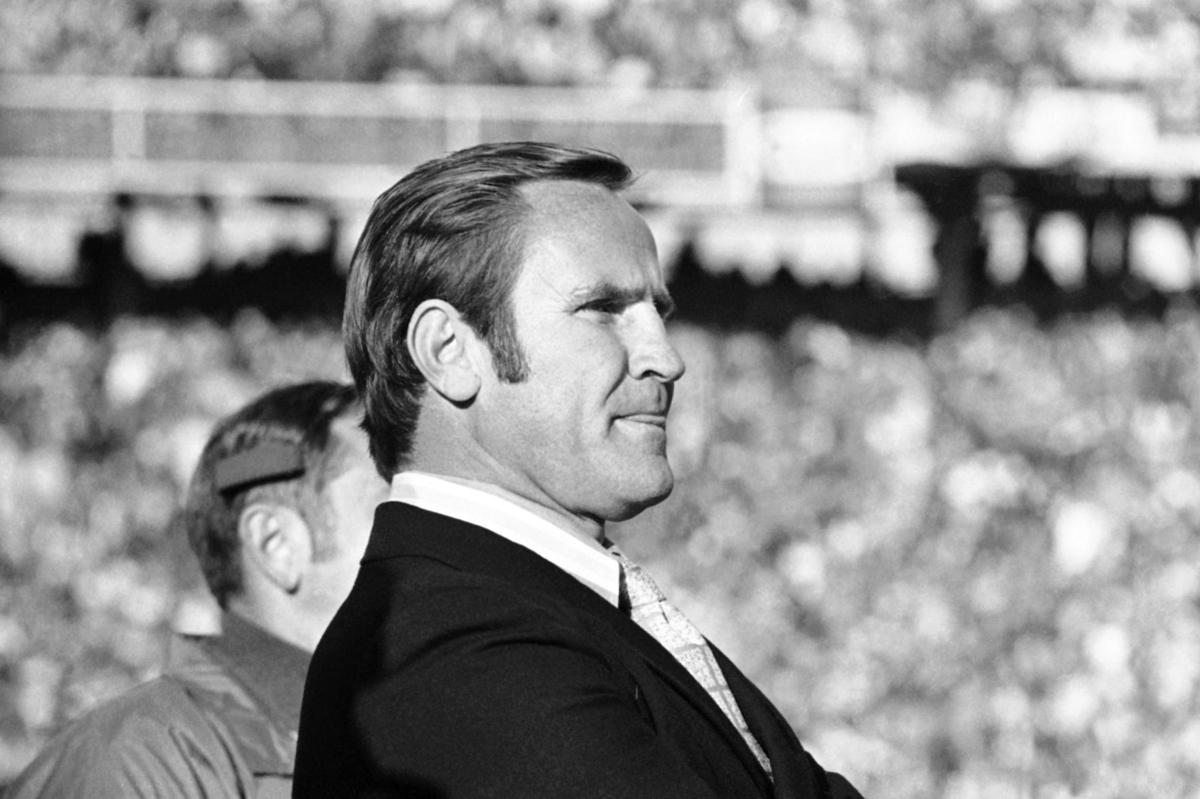 Miami Dolphins coach Don Shula bites his lip as he watches his team go down to defeat on Sunday, Jan. 16, 1972 in the Super Bowl in New Orleans. Dallas won 24-3. (AP Photo) 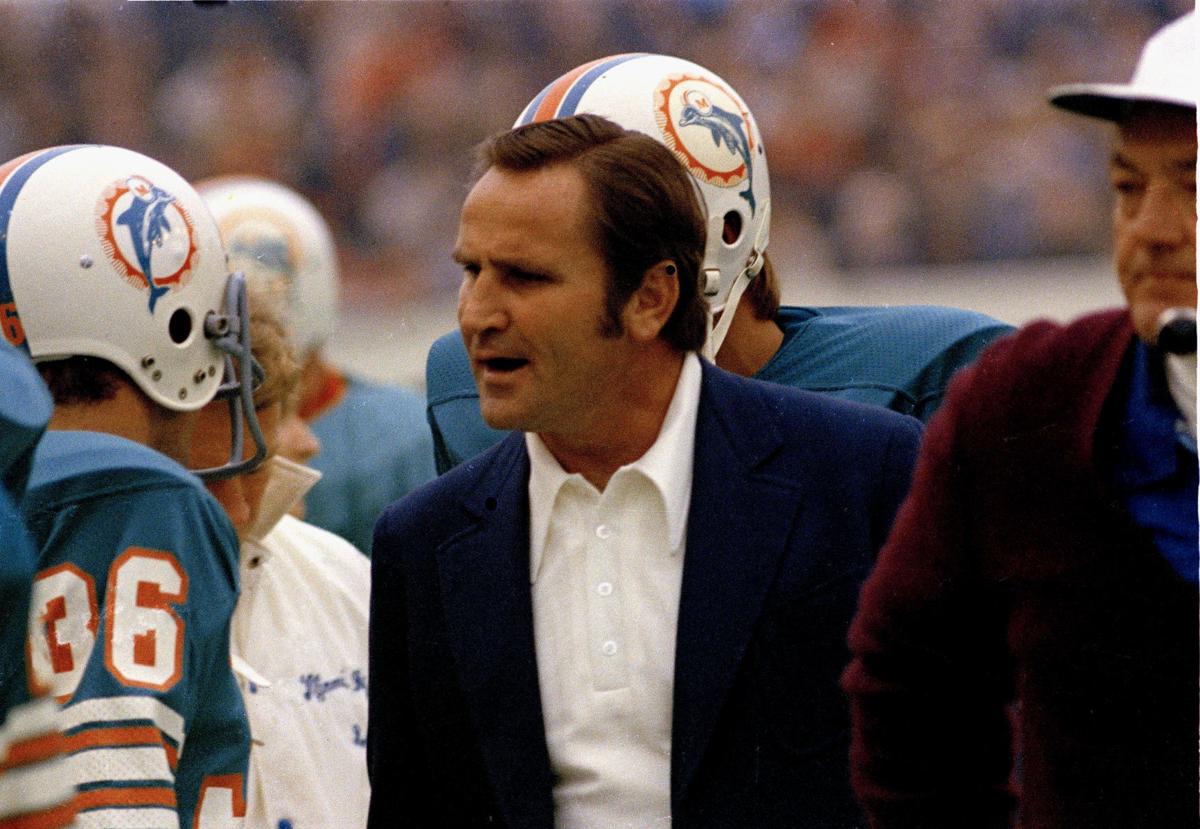 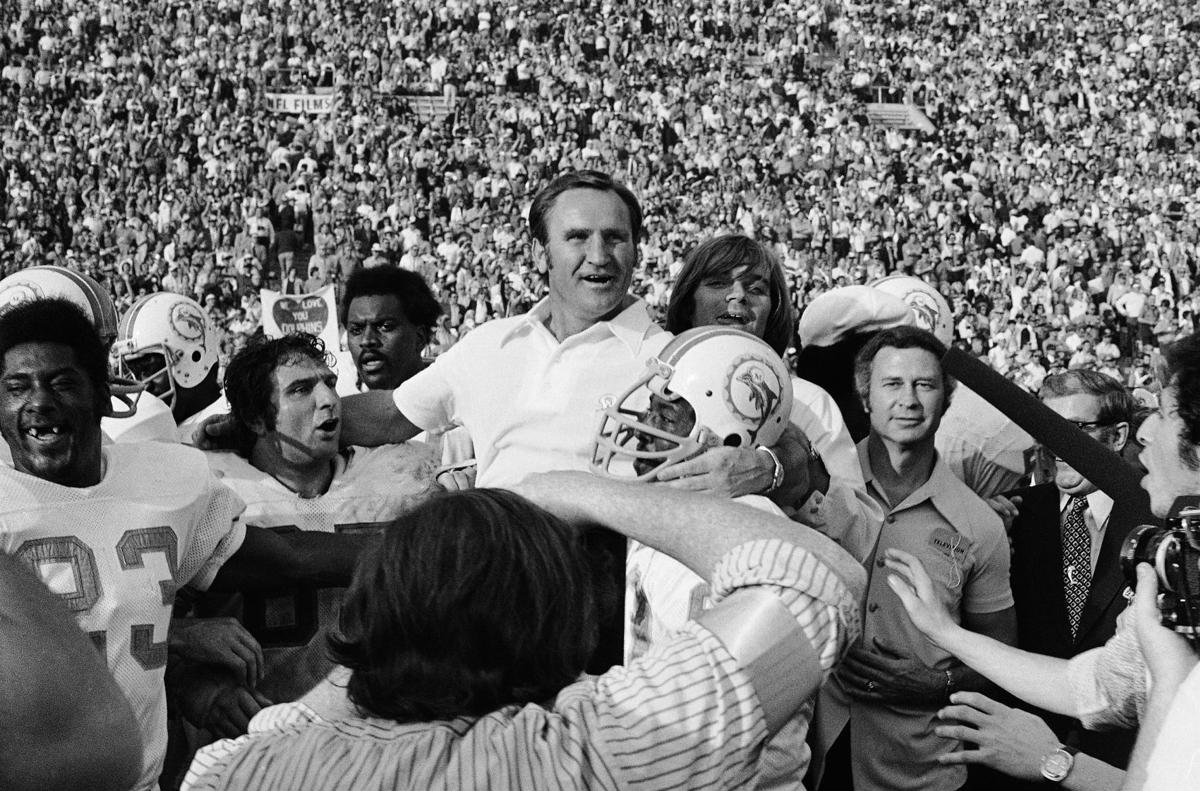 FILE - In this Jan. 14, 1973 file photo, Miami Dolphins coach Don Shula is carried off the field after his team won the Super Bowl game with a 14-7 victory over Washington, in Los Angeles. The Dolphins team that achieved the only perfect season in NFL history will be honored by the White House next Tuesday, Aug. 20, 2013, more than 40 years after its accomplishment. (AP Photo/File)