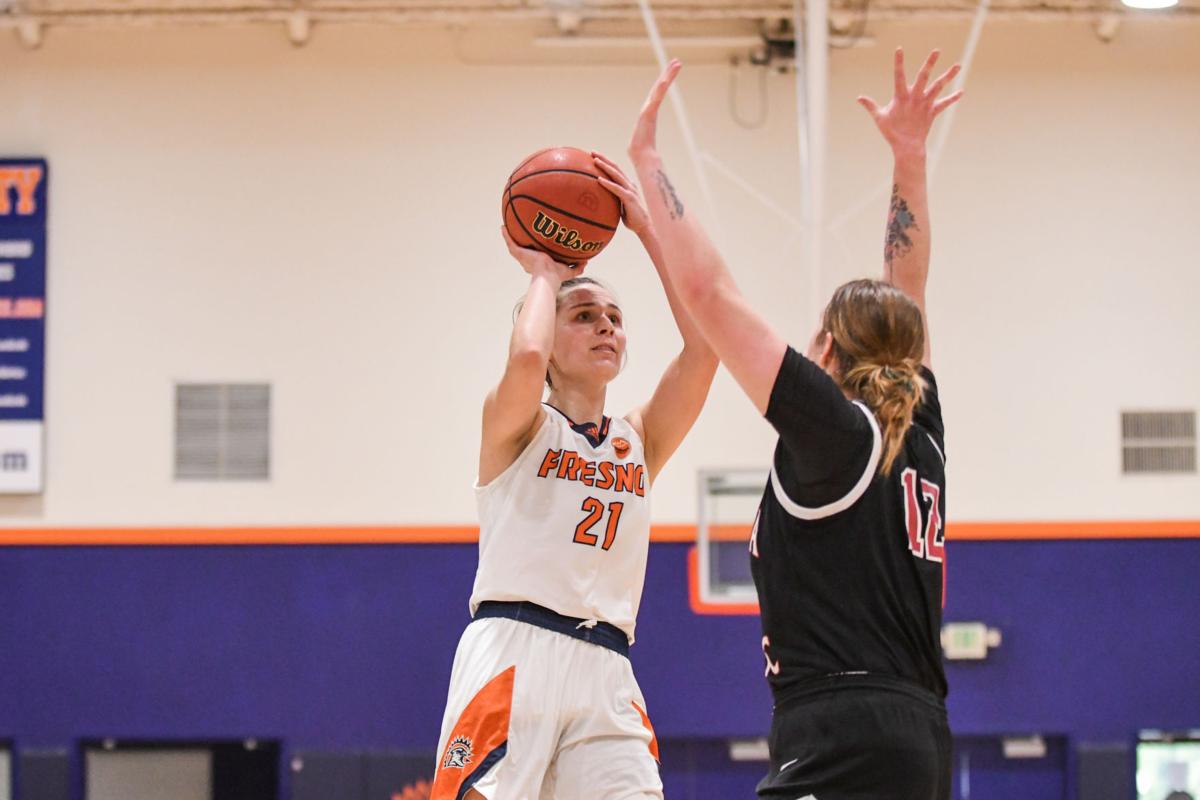 Bayli McClard, left, takes a shot in this undated photo. 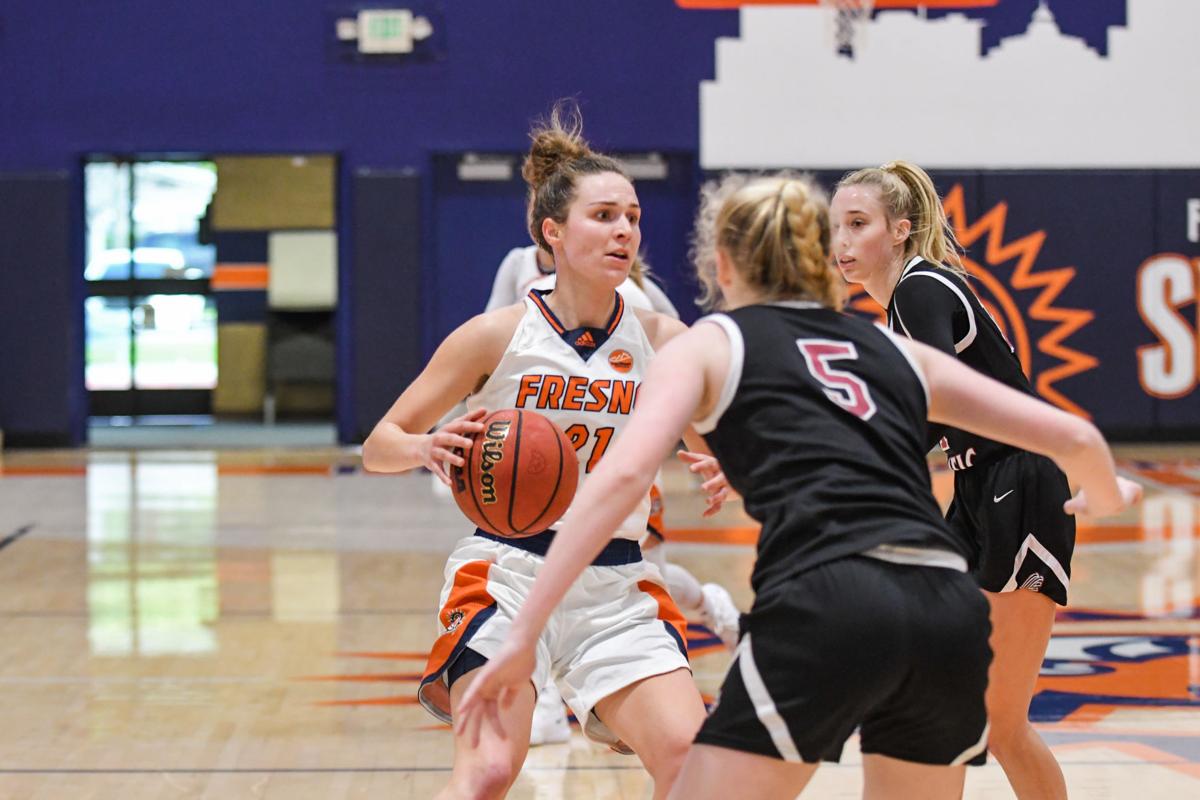 Bayli McClard drives against defenders in this photo.

A meeting before the beginning of the 2019-2020 season with Fresno Pacific head women’s basketball coach Tim Beauregard led to an opportunity for Bayli McClard to rewrite her basketball history.

After returning to the basketball court after a five-year hiatus, the Hanford native, who is now in her second season with the Sunbirds, is continuing to thrive during her senior season.

McClard is currently averaging a double-double through the Sunbirds' seven games, six of which she has started. McClard is averaging 15 points and 11 rebounds per game in helping lead the team to a 4-0 start in PacWest play.

“I was thankful for the opportunity last year but there was a lot to take in with getting back into school and finding a place and everything. I feel like I am more comfortable with the team this year.” McClard said. “With COVID happening, it made me appreciate the journey. Basketball can be taken away at any time and I just really try to be grateful and being blessed with this opportunity.”

McClard said that a change of mindset has led her to success on the court so far this season.

“Being more aggressive offensively and defensively helps the team win and I want to do things that are going to help us be successful. I have been trying to focus on that,” McClard said. “I think in general it is just having more confidence in myself. I think overall my confidence and wanting to help my team win has been pushing me. I want to be my best so we can be our best.”

Coach Beauregard believes that McClard’s comfortability in her second season has led to her becoming the player the team needs to win.

“She is a little more at peace with the journey. There is an appreciation for her to be able to write this final chapter of her basketball book that she didn’t think she would be able to have,” Beauregard said. “It was also new and so fast last year in trying to figure out how to be a college athlete. I feel like this year she is operating with a sense of maturity and piece about her and I think she is enjoying this year more.”

“As she found her identity with this year’s team and looked around and saw a bunch of teammates wanting her and needing her to take more of a role and be more aggressive, I think that it has started to mesh together the right way,” Beauregard said. “We play her a ton of minutes and expect a lot form her, but I think she is owning that role and finding her comfort in that and we are a lot better when that happens.”

McClard said she realized after watching film with her coach of a game from earlier during the 2021 season what her role needed to be to help the team be successful.

“There were multiple times that I could have attacked, and I didn’t, and coach said that hurts our team when I didn’t do that,” McClard said. “Something about that just clicked in my head that I am doing the team a disservice when I don’t be aggressive, and I have just been focusing on that.”

Another aspect of the game that McClard, a 2013 Hanford High graduate, is finding is her leadership role on the team.

“I have accepted that role a little bit more this year. I am a lot older than some of the girls so I want to be someone they can look up to and If I see one of my teammates working hard, I want to do it too,” McClard said. “It is like a domino effect. I just try to work hard in everything I do.”

Coach Beauregard said that Bayli’s unique perspective of the game is what is helping lead the Sunbirds.

“I think her perspective is different. There is a level of maturity, there is a level of the game being taken away. She leads by action a lot because nobody really outworks her, and I agree with her in the sense that it is a domino effect,” Beauregard said. “We have a team this year that responds well to that type of leadership. Everyone on our team has a different leadership voice and a different leadership burden that they carry for our team. Bayli’s leadership is a bit different, she is not the most vocal on or off the court, but she leads with how she goes about her business. There is a level of appreciation because of who she is as a teammate and how hard she works every day, and her teammates gravitate towards. Everyone in our program knows we are a better basketball team when she is on the court.”

Due to eligibility requirements for her returning to the court, McClard is not allowed to be around the team during the fall semesters. Now that she is in her second season with the team, the bond is stronger which she believes has helped.

“This year’s team all the girls are excited to be here and excited to play when we can. Everyone is just excited to play basketball and work hard for each other It is a good environment to be in,” McClard said. “It was difficult being away because I didn’t really get that bonding time in the beginning and that was tough.”

Coach Beauregard has seen that bond continue to grow and said that is a huge aspect of the success that the team and Bayli are having.

“Bayli is not a presence that needs a lot of attention. She is not needy and that is the most amazing thing about her. She can show up a little bit late this year and our team knows who she is and her consistency that she brings day one. Her teammates have that bond with her, and her maturity allows her to go I am here, I am with you and I support you, I am here to do my job the best I can so we can all be successful,” Beauregard said. “I think that mature approach is different because of her experiences and her forced to be flexible and her first go around with basketball that she just shows up and is consistent from day one and I think there is an appreciation her teammates have for her in that this is what somebody looks like when they are mature and approaching there job in a way like she does that really matters and it resonates and it is an incredible role model that our younger players have to reach the higher level of this game. We have a lot of mature young woman on our team, but I think Bayli approaches it in a unique way that they appreciate.”

The Sunbirds end their season on Feb. 26 and Feb. 27 with a two-game series against Dominican.

“Whatever this year ends up being it ends up being. We are so excited that we have been able to be together and we are so fortunate compared to some other programs across the country,” Beauregard said about the Sunbirds being able to compete this season. “We had an administration that put together a very rigorous testing that allowed us to be together in practice and lift. The mental wellbeing of our team being able to be together trumps everything else as far as record goes, or postseason. I do not think everything is guaranteed and we talk openly that this could all be over any given day.”

No matter what happens this season for McClard, she said she is just thankful to be back on the court and playing the game she loves.

“A couple of years ago this was farthest from my mind I never thought that I would be playing again,” McClard said. “I just think that the biggest thing that I learned and that others can take from my experience is that it is never too late to restart and do what you want to do. I got handed these opportunities and I took them.”

Coach Beauregard agrees with Bayli and says she has brought a great perspective to the program.

“She has proven that everybody’s dream chase can be different, but you can chase your dream. I am so proud of her and excited for what is to come. She could have easily been a little too nervous and a little too scared and she was in the beginning to even take the opportunity,” Beauregard said. “For her to take the opportunity and go through the challenges and embrace the struggle and stay with it speaks to her character and the life lessons she learned in the first go around with basketball. She will leave a legacy here and she has helped us build this program in a unique way. We love the fact that we got to give her a second chance and that she is doing right by that opportunity.”

High school football could be on its way: California makes it easier for outdoor sports to return

The announcement makes it easier for high school football and other contact sports to return to the area, though testing of student-athletes is a requirement for areas with a higher case rate. Football practice could begin as soon as Feb. 26 in areas that can adhere to the new guidance.

Bayli McClard, left, takes a shot in this undated photo.

Bayli McClard drives against defenders in this photo.