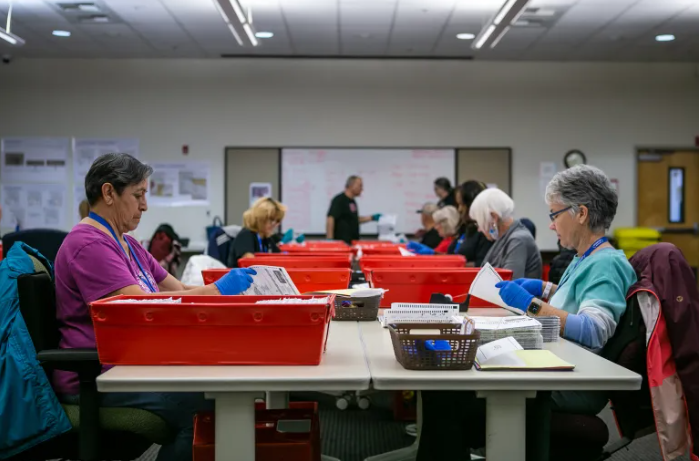 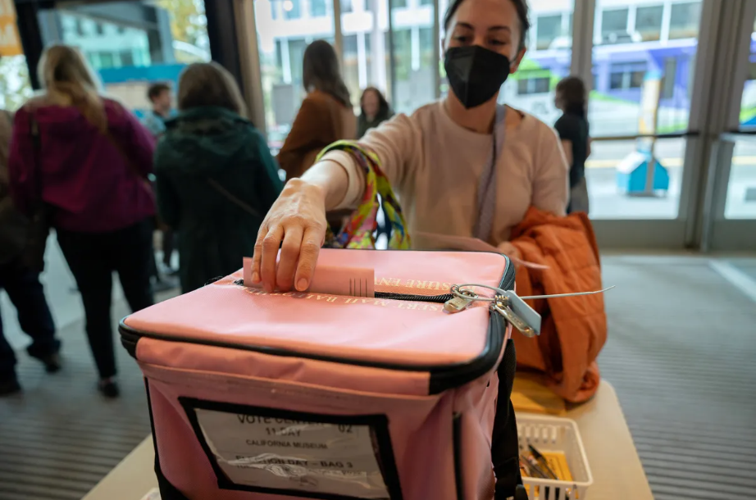 Felicia Gold casts her ballot at the California Museum on Nov. 8, 2022. 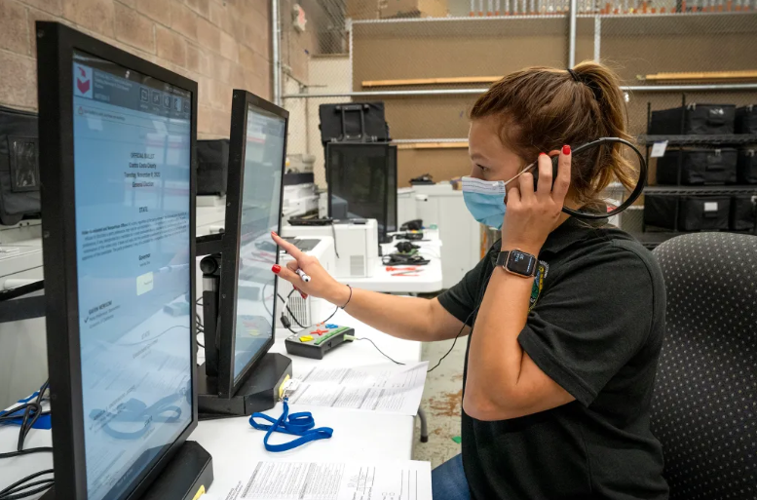 For more than a week after the Nov. 8 election, control of the U.S. House of Representatives remained undetermined. All eyes had turned to more than half a dozen uncalled races in California when, on Wednesday, the Associated Press projected victory for Rep. Mike Garcia in his Los Angeles-area district, finally handing Republicans a slim majority in the new Congress.

As tense days ticked by without resolution, political pundits across the country once again lamented why the vote count takes so long in California, while conservatives resurfaced concerns that late-arriving ballots and slow results exposed Democratic efforts to steal close races.

In reality, the extended count, which will take a month to finish, is a consequence of California’s shift to overwhelmingly voting by mail, a convenience that requires several additional steps of verification by local officials once ballots arrive.

Though election experts in California say there are several ways the state could potentially speed up the tally, there is little urgency to prioritize them. With policymakers focused instead on improving accessibility, participation and security, the waiting game seems here to stay.

“Democracies are not meant to be efficient. They’re built on a foundation that every person’s vote matters,” said state Sen. Steve Glazer, an Orinda Democrat who leads the Senate committee on elections. Instant answers, he said, are not more important than ensuring the accuracy and integrity of the results.

Glazer added that no one has ever raised serious concerns with him about the speed of vote counting.

“The current hysteria generated by some is a lot of bunk that feeds their ideological agenda to the detriment of trust in our democracy,” Glazer said. “Is there a way to make it faster? Yes, there is. It is worth the price, the cost?”

The crawling pace of election results in California — with updates dribbling out day by day — stems from changes in how people vote over the past two decades. The state implemented no-excuse absentee voting in 2002, which during the coronavirus pandemic became a system where every active registered voter is mailed a ballot. Gov. Gavin Newsom signed a law last year making that permanent.

Some experts point to additional factors, including the sheer size of California and its independent redistricting process, which creates more competitive races where the outcome cannot be determined as quickly.

But the timeline is fundamentally driven by mail ballots, which simply take longer to count than those cast at a polling place on election day.

As of 5 p.m. today, county election offices had counted about 9.5 million votes, but still had more than 1.5 million ballots left to process.

The reasons are not nefarious. Local election officials verify the signature on every mail ballot and check that the voter has not already cast a ballot in another jurisdiction before counting it. To minimize the number of legitimate votes that are disqualified for procedural reasons, California accepts ballots postmarked by election day that arrive as much as a week later and gives voters an opportunity to fix missing or mismatched signatures on their ballots. Before certification, election offices also recount 1% of ballots by hand as an internal audit.

“We have a huge population of registered voters and California stresses enfranchisement, so we have a process that by law ensures both voting rights and the integrity of elections,” Secretary of State Shirley Weber, the state’s chief elections officer, said in a statement Tuesday. “I would call on everyone to be patient.”

Her office did not make Weber available for an interview, but spokesperson Joe Kocurek said that, with the count still ongoing, “It’s a little early for us to assess whether any changes are needed.”

But the lengthy timeline has contributed to a growing partisan split in trust in elections, fueled by conspiracy theories spread by former President Donald Trump that the 2020 presidential election was stolen from him.

An October survey by the UC Berkeley Institute of Governmental Studies found that 74% of Republicans in California believe election security in the United States is under threat, while Democrats were evenly divided. Large numbers of Republican respondents considered people voting illegally or trying to change results to be major threats, with more than half expressing no confidence in machine counting of ballots.

“The ironic thing is that the people who are making claims questioning the veracity of our election results because of the long vote counts are overlooking that the reason it takes a long time to count mail ballots is because we are ensuring the security of the vote,” said Kim Alexander, president of the California Voter Foundation, which advocates to improve election administration and access to voting.

Nevertheless, she said, California should work to speed up the process to deal with the perception of malfeasance — and the torrent of abuse that it has unleashed on election officials, who are burning out of the job at extraordinary rates.

Some solutions could be as simple as messaging.

Several county election officials said that people turned their ballots in earlier during the 2020 presidential election, allowing their offices to process a greater share of votes in the weeks leading up to election day and announce those results as soon as the polls closed. This year, more were dropped off at polling places on election day, or were still arriving this week because they were mailed later.

Olivia Hale, registrar of voters for San Joaquin County, said she wants to run an educational campaign before the next election encouraging people to return their ballots earlier.

That could also be accomplished by creating more opportunities for early, in-person voting, such as the weekend before the election.

Only 27 of 58 counties in California use the new Voter’s Choice Act model, which replaces neighborhood polling places with regional vote centers that open 10 days before election day and offer registration, voting and other services. Counties are responsible for the cost and administration of the vote centers, including finding locations and election workers to staff them.

Hale said she still plans to advocate for San Joaquin County to adopt the system, because “our current model fits a model of election that was in the past.” But she would also like to see the state offer grants to help counties upgrade their equipment and hire more staff.

“I just want to do what gives the voters what they want,” Hale said.

Shasta County does not use the Voter’s Choice Act model either, but many residents have taken advantage of the option to come to the elections office in person to have their mail ballot processed immediately, said Cathy Darling Allen, the county registrar of voters.

About 2,000 people voted this way in the primary and that increased to more than 3,000 in the November election, which Allen attributed to skepticism around mail-in voting. She said the timeline for counting ballots is “a push and pull,” not just with voters but also with candidates and the media.

“We have tens of thousands of ballots. Of course that’s going to take us time,” she said. “Someone I worked with once told me, ‘Elections can be cheap and fast, and they can be accurate — but you have to pick two.’”

‘You just have to grind it out’

When election offices are dealing with mail ballots, however, there’s not much they can do to go faster. Processing each one takes significantly more manual labor, including verifying the signature, opening the envelope and extracting the ballot, and aligning stacks of ballots for the counting machines. Damaged ballots that cannot be read by the machines are duplicated by workers and run through again.

“Once you receive 100,000, 200,000 ballots like that, it’s just a chore. You just have to grind it out,” said Tommy Gong, deputy county clerk-recorder for Contra Costa County. “I don’t think there’s anything that could speed it up, other than maybe more equipment.”

Because each mail ballot envelope is scanned twice after it arrives — once to check the signatures and again to remove the challenged ballots for further verification or fixing — Gong said having a second sorting machine could speed up their tally by allowing them to undertake both steps simultaneously.

But that might also require more vote counters (Contra Costa County has six) and more employees (the county has 32 permanent and 65 temporary workers for the election) to maintain the pace, plus a larger space to house the massive machines.

“If that was a desire to be able to certify quicker, it would need to really be looked at holistically,” Gong said. “By doing things quicker, you certainly could be looking for ways to cut corners that could start chipping away at the integrity of the elections.”

Technological developments may ultimately help speed the vote count for mail ballots, though that is further down the line.

Gong said his office installed a new component on its scanner this year that opens the envelopes, so workers no longer have to put them through a separate machine. He’s less certain about automated signature verification, technology the bank industry is already using, because he believes that both workers and voters are more confident in human review.

Not a priority for policymakers

While California has radically overhauled its voting system over the past decade, adding automatic registration, universal mail ballots and free postage to expand access and participation, the speed of the count has not received much attention at the state Capitol.

A 2017 report by the nonpartisan Legislative Analyst’s Office suggested that, to improve confidence in the election process, “the Legislature could make receipt of funding conditional on counties demonstrating efforts to improve the swiftness of their tallies.” That’s as far as the idea went.

Other programs have taken precedence in the budget. A request this year by 17 legislators and several voting rights advocates for $85 million to conduct voter education and outreach did not even get a committee hearing.

Legislators who focus on voting rights and election policy said they were open to ideas from local officials and other states that could speed up ballot processing, but they expressed doubts that there would be easy solutions that could work across the entire state. Policies such as simplifying candidate filing requirements and updating recall rules seemed to be a higher priority.

“It’s the kind of thing we get very focused on and passionate about now, as the count is going slowly,” said Assemblymember Marc Berman, a Palo Alto Democrat.

Berman, who carried the legislation to mail a ballot to every active registered voter in California, said creating new standards for how counties publicly report results and what information they share could be a simple, inexpensive fix.

“At a time when a lot of people are lying to the public to try to sow doubt in our democracy, that makes it that much more important for us to be as transparent as possible,” Berman said. “That transparency creates trust.”

Gail Pellerin, the former chief elections official for Santa Cruz County, was just elected to the Assembly. The Democrat said she hates the question of why counting votes takes so long, comparing the tally to wine-making — processes that can’t be rushed.

“I certainly would not want to compromise the intensive audits and verification and participation and security just to get it faster,” Pellerin said. “I think it takes the right amount of time to deliver democracy that is accurate and fair and transparent and accessible.”

This article was republished with permission from CalMatters.  Read more of their coverage of California state government on CalMatters.org