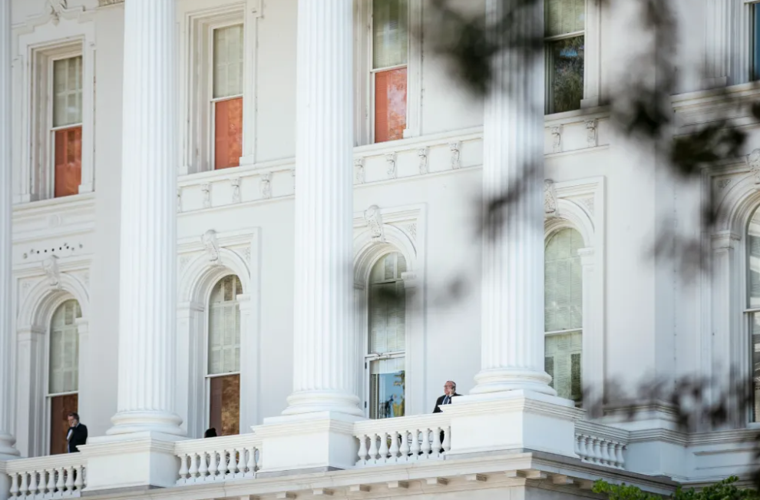 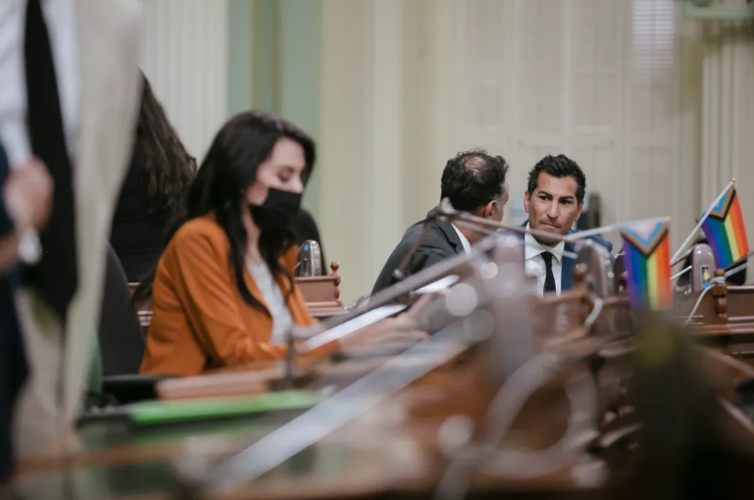 Assemblymember Robert Rivas talks to Assemblymember Ash Kalra during a floor session at the state Capitol in Sacramento on Aug. 1, 2022.

California’s campaign finance regulator will not investigate a complaint into Govern For California, the subject of a CalMatters investigation that explored the nonprofit’s role influencing legislative elections and “pushing the envelope” of state campaign finance law.

But the chairperson of the Fair Political Practices Commission said he would seek to develop new regulations more clearly defining coordination among affiliated campaign committees, because he has questions about the independence of Govern For California’s network of chapters and whether they could potentially be circumventing contribution limits.

“I’m troubled by the allegations that were presented in the complaint and I’m troubled by the fact that this organization seems to be, I think, playing very close to the line,” said Richard Miadich, who said he plans to bring up the issue at the September FPPC meeting. “It’s one thing to say you’re independent. It’s another to in fact be independent.”

Days after CalMatters published its article earlier this month, Dave Low, a former labor union leader, filed a complaint with the commission. Low characterized Govern For California’s network of legally independent campaign committees as a “corporate structure that facilitates money laundering and vastly exceeds the contribution limits to candidates.”

Staff lawyers at the FPPC disagreed, though they offered little in the way of explanation in the rejection letter they sent to Low this week. “After review of the complaint and evidence provided, the Enforcement Division will not pursue an enforcement action in this matter,” wrote division chief Angela Brereton.

The letter did not specify whether the FPPC’s rejection of the complaint implies its seal of approval for the way that Govern For California has structured its campaign spending, or if this particular complaint lacked sufficient evidence to warrant an investigation. Jay Wierenga, a spokesperson for the FPPC, declined to provide clarification.

“No comment, the letter speaks for itself,” he wrote in an email.

Still, Govern For California founder David Crane declared vindication. “We are pleased that this baseless complaint was summarily rejected by the Fair Political Practices Commission, and that the legality of GFC’s organization, structure and operations have again been confirmed by the FPPC,” he said in a statement.

Through a spokesperson, Crane declined to comment on Miadich’s concerns about Govern For California.

Though the commission’s enforcement division, which has sole legal authority to launch investigations, declined to investigate this complaint against Govern For California, that does not prevent commissioners such as Maidich from directing staff to revise old regulations or write up new ones.

Crane, a Stanford lecturer and former advisor to Gov. Arnold Schwarzenegger, founded Govern For California as a nonprofit in 2011 to serve as a check on the political influence of organized labor and other “special interests.” As detailed in the CalMatters article, 18 spending committees affiliated with Govern For California have come to play an increasingly prominent role in state politics by making direct contributions to legislative candidates across the state. A majority of the funding to these chapters comes from the same group of 20 donors. Because the chapters are considered to be legally independent of one another, each donor can make a maximum contribution of $8,100 per calendar year to each chapter. The chapters frequently support the same candidates — often making identically-sized contributions on the same day.

As of Thursday, the network has donated nearly $3.1 million to 113 candidates in the 2022 election, including 84 who are running for legislative seats. Its spending took on added relevance this year with the ongoing squabble between Democratic Assembly Speaker Anthony Rendon and Democratic Assemblymember Robert Rivas over who will lead the chamber in 2023. Rivas is one of the Govern For California network’s largest beneficiaries; his brother, Rick Rivas, serves as Govern For California’s longtime advisor.

CalMatters spoke to eight campaign finance experts for the story. Though none said the organization was doing anything illegal, some argued that it raised ethical concerns or highlighted important loopholes in state law.

Ann Ravel, former chairperson of the FPPC and former head of the Federal Election Commission, called the structure “undemocratic.” But she also said it was not fundamentally distinct from the way that many organized labor groups arrange their campaign spending.

Crane has also likened Govern For California’s independent chapters to political action committees affiliated with the Service Employees International Union. However, as some experts pointed out, union locals have hundreds of members, draw on a wider array of small donors and, besides deciding political spending, represent workers in bargaining for wages and benefits. If FPPC commissioners do instruct their staff to review the definition of coordination between affiliated campaign committees, as Miadich said he hopes they will, it is unclear if and how the distinction between Govern For California’s networks and organized labor-affiliated committees would be made.

In 2020, the FPPC signed off on Govern For California’s approach in an advice letter that gave the chapters permission to coordinate as long as each was “controlled by different individuals, who independently direct and control the entities’ respective contributions.” That determination was based on the facts as provided by Govern For California, not through an investigation.

The Govern for California chapters are in “strict compliance” with that advice letter, wrote Steven Lucas, lawyer and treasurer for Govern For California, in his response to Low’s complaint. “The complaint fails to include a single factual allegation that would support its legal allegation…The GFC Chapters are all run independently of each other,” Lucas wrote.

“This seems like it has the potential of circumventing contribution limits,” he said.

These were among the questions that CalMatters posed to Crane while reporting its story. He declined to address them.

Miadich said he did not know everything the FPPC enforcement division reviewed before rejecting Low’s complaint, so he could not comment on whether he agreed with the decision. But he said he would ask the commission’s legal counsel to explore what regulatory options are available, including whether it could adopt rules laying out the factors the enforcement division should consider when determining independence in a case such as the complaint against Govern For California.

Miadich was appointed to the commission by Gov. Gavin Newsom in April 2019. Prior to that, he was a partner at the prominent Sacramento election law firm OIson Hagel & Fishburn, now Olson Remcho. Through FPPC spokesperson Wierenga, Miadich said he has no recollection of “any direct contact” with any of the parties involved, including Govern For California, Robert Rivas or Rendon.

CalMatters also reached out to the other three FPPC commissioners for this story, but they did not respond or declined to speak on the record. Miadich said he would tell his colleagues not to discuss Govern For California with CalMatters to avoid violating state open meeting laws.

Asked for his response to the rejection of his complaint, Low, a former California School Employees Association president, said “there’s not much I can do if FPPC won’t even look into it.”

While the FPPC enforcement division isn’t investigating Low’s complaint, it is apparently reviewing a fake flyer that was provided to a CalMatters reporter from a source who was granted anonymity. Based on the flyer, CalMatters incorrectly identified Crane as the sponsor of a political event benefiting Assemblymember Rivas last month.

In an email exchange shared by Crane, FPPC consultant Amber Rodriguez asked Govern For California’s lawyer Lucas for “a copy of the forged document/false advertisement that CalMatters later issued a correction for” so that staff could “review it for a possible violation” of state election law.

Though the FPPC wouldn’t confirm an investigation, Crane said he was “gratified that the FPPC will review the forged flyer for possible violation of California’s Political Reform Act.”

“It is not often that we see such a blatant attempt to distort the political process by forging a document and passing it off on the media,” he added in his statement. “It is a clear violation of the Act to steal the identity of a registered PAC in good-standing. This is an egregious dirty trick perpetrated on the media and intended to smear members of the Assembly and Govern for California.”

David Crane and many donors to Govern For California are financial supporters of CalMatters, which retains full authority over editorial content and makes news judgments independent of donor support.

This article was originally published by CalMatters. You can read more of their coverage of California state government on their website, CalMatters.org.