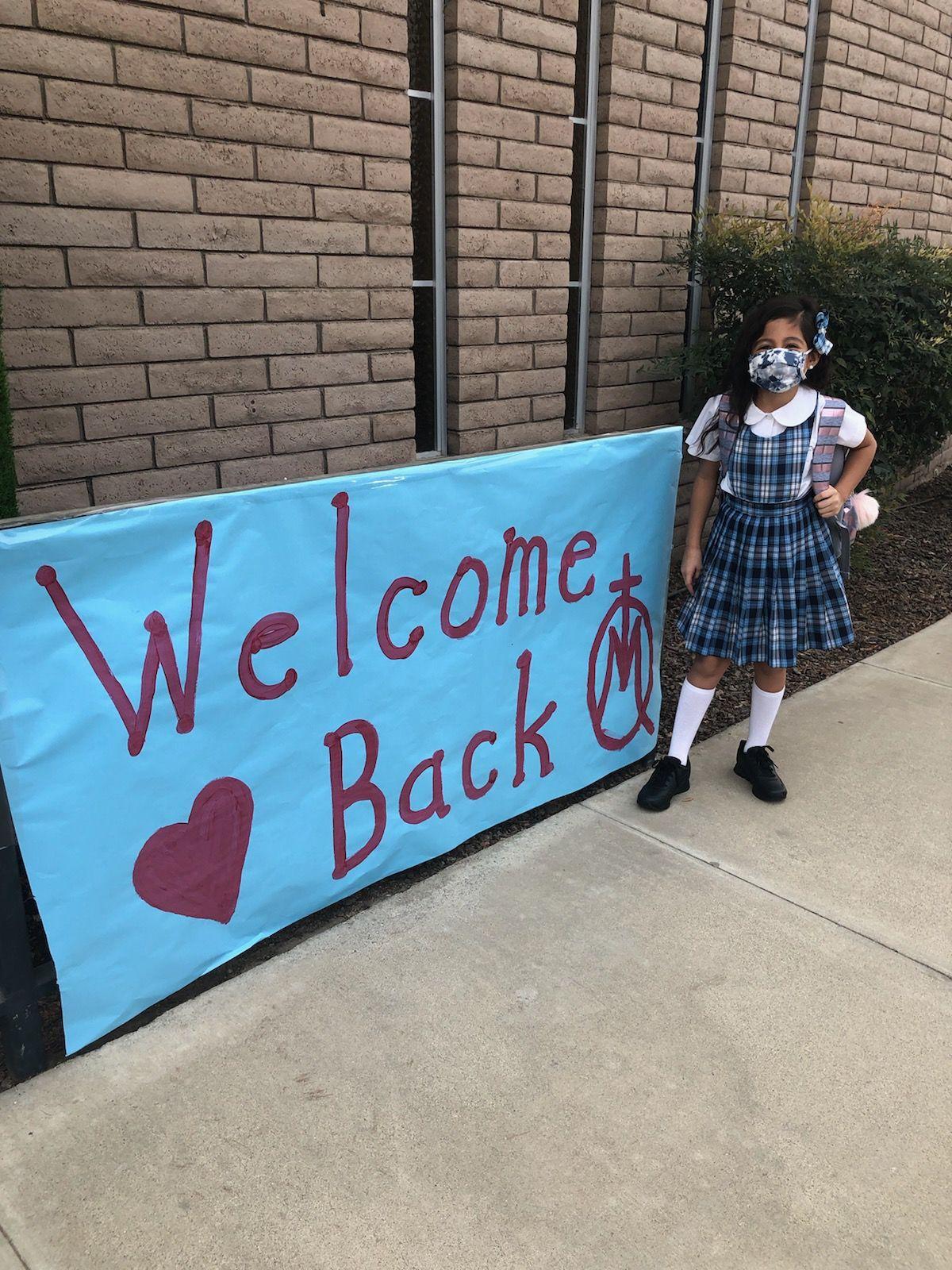 A student at Mary Immaculate Queen School poses with a "Welcome Back" sign on the first day back to in-person learning on Monday. 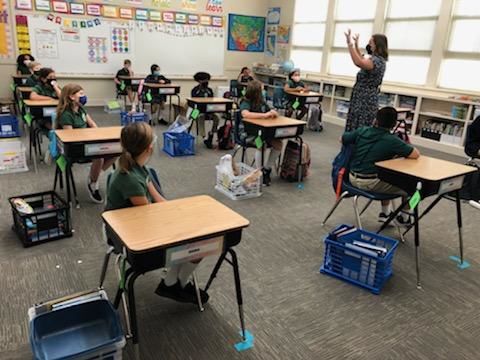 St. Rose-McCarthy held in-person classes for the first time this year on Monday. 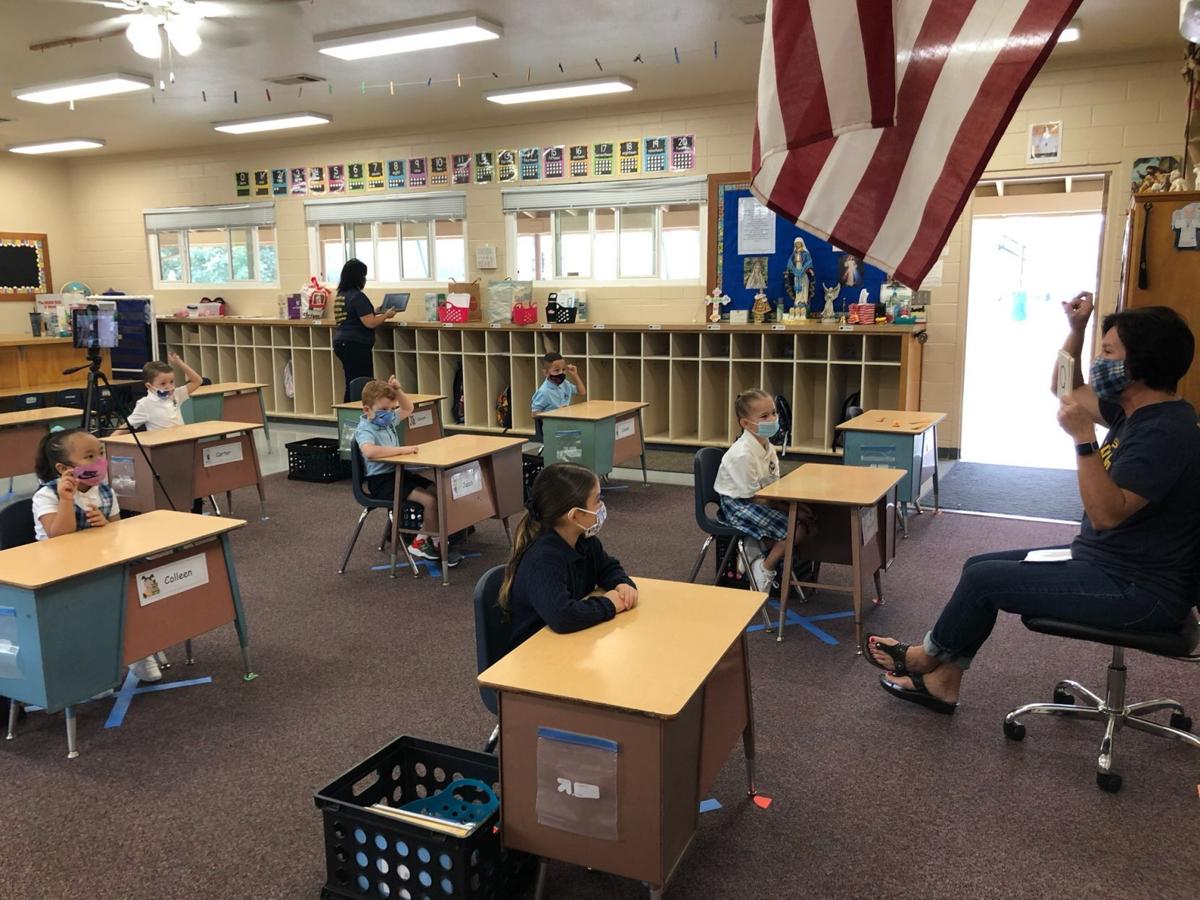 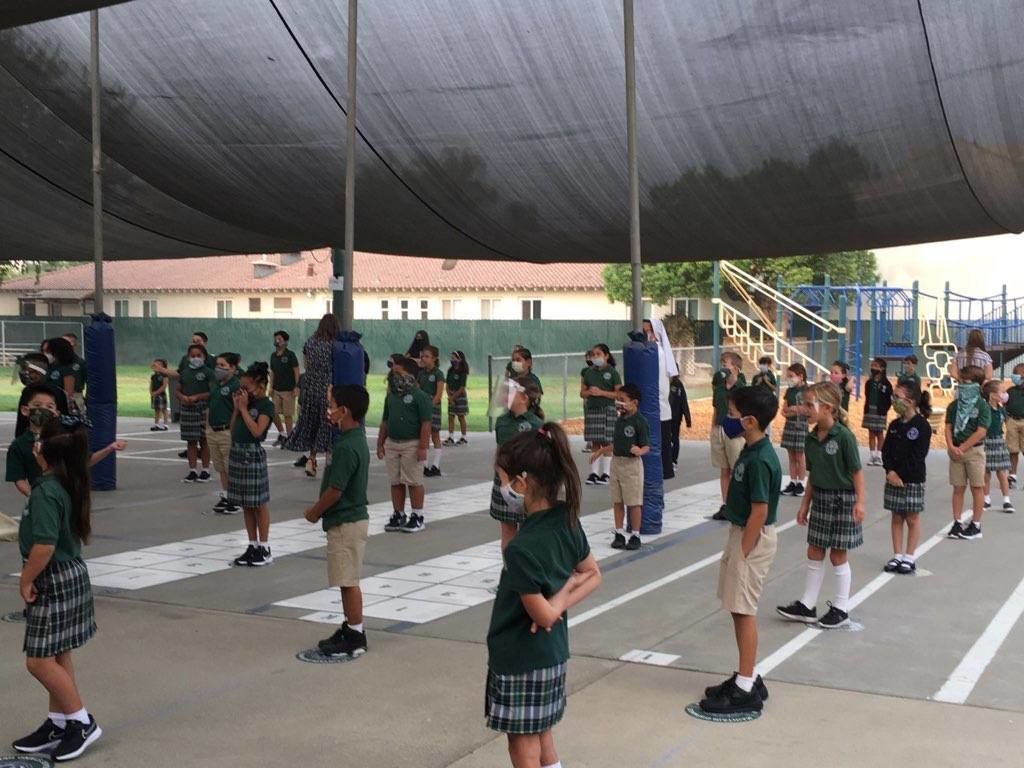 St. Rose-McCarthy Catholic School had students socially distanced on their day of in-person learning on Monday.

Mary Immaculate Queen School and St. Rose-McCarthy Catholic School both began their first days back in the classroom since COVID-19 moved school to distance learning.

"It was just pure joy," Mary Immaculate Queen School Principal Rachael Manzo said. "All of us were so happy and so excited. The kids were jumping up and down and the teachers were thrilled, energized to be here."

Manzo, who's in her third year as principal, said their excitement led to the staff getting to school an hour early, but it was well worth it with everything that needed to be readied for the students.

There were temperature checks and hands were washed, while students were socially distant. Still, the interaction was something both teachers and students had missed.

"I feel like our students were just missing [interaction]," Manzo said. "Even if it is social distanced, they still see their friends. They see their eyes light up. Yes, their faces are behind a mask, but they’re still in the same room together which I think has been great."

Mary Immaculate Queen and St. Rose-McCarthy's waivers are good for Tk-sixth grade schooling. They are only one of a handful of schools who were approved for a waiver and one of three locally.

"It’s a huge sense of pride," Manzo said. "We were praying so hard and when we got word that we got our waiver, I could not stop crying."

Manzo said she worked on the waiver application with the Diocese of Fresno for weeks. She called it an accomplishment to get the waiver granted and prove that they could keep children safe in their classrooms.

"To open today was just a validation of that," Manzo said.

AVENAL — Three Avenal gang members were arrested after they followed a victim to his house and attempted to shoot him, Avenal Police Departmen…

On Tuesday and Wednesday, the father-son duo explored their old hometown. The visit was really for 96-year-old father, Gordon, who made what he believes is his final trip to Hanford.

VISALIA — On Sept. 20, at 4:07 p.m., Visalia Police Department officers were dispatched to the 1600 block of South Regina for an unknown male …

Man starts fire in alleged attempt to get deported

One group of moms have taken it upon themselves to make distance learning a bit easier.

KETTLEMAN CITY — A Huntington Beach man was arrested Saturday after leading law enforcement on a high speed chase in a stolen car, according t…

Manuel Goncalves Leonardo was born in Feteira, Terceira, on the Azorean islands of Portugal on January 12, 1944 to his parents, Maria Jesus Bo…

Main Street Hanford: We can all agree that COVID sucks

Since the beginning of the shutdown, Main Street Hanford has been advocating for businesses to re-open and sharing any resources we have to he…

Nonprofit of the Year: Champions Recovery aims to be a staple in the community

“It is great to be recognized for the work that we’re doing, but we also know that we’re far from done. We’ve gotten more engaged, but the more you get engaged, the more you also recognize there’s so much more work to be in our community,” Executive Director Frank Ruiz said.

He leaves behind his wife, Enma, his three children (and their spouses), Militza & Pedro, Elmar & Sarah, and Enma, and four grandchild…

A student at Mary Immaculate Queen School poses with a "Welcome Back" sign on the first day back to in-person learning on Monday.

St. Rose-McCarthy held in-person classes for the first time this year on Monday.

St. Rose-McCarthy Catholic School had students socially distanced on their day of in-person learning on Monday.