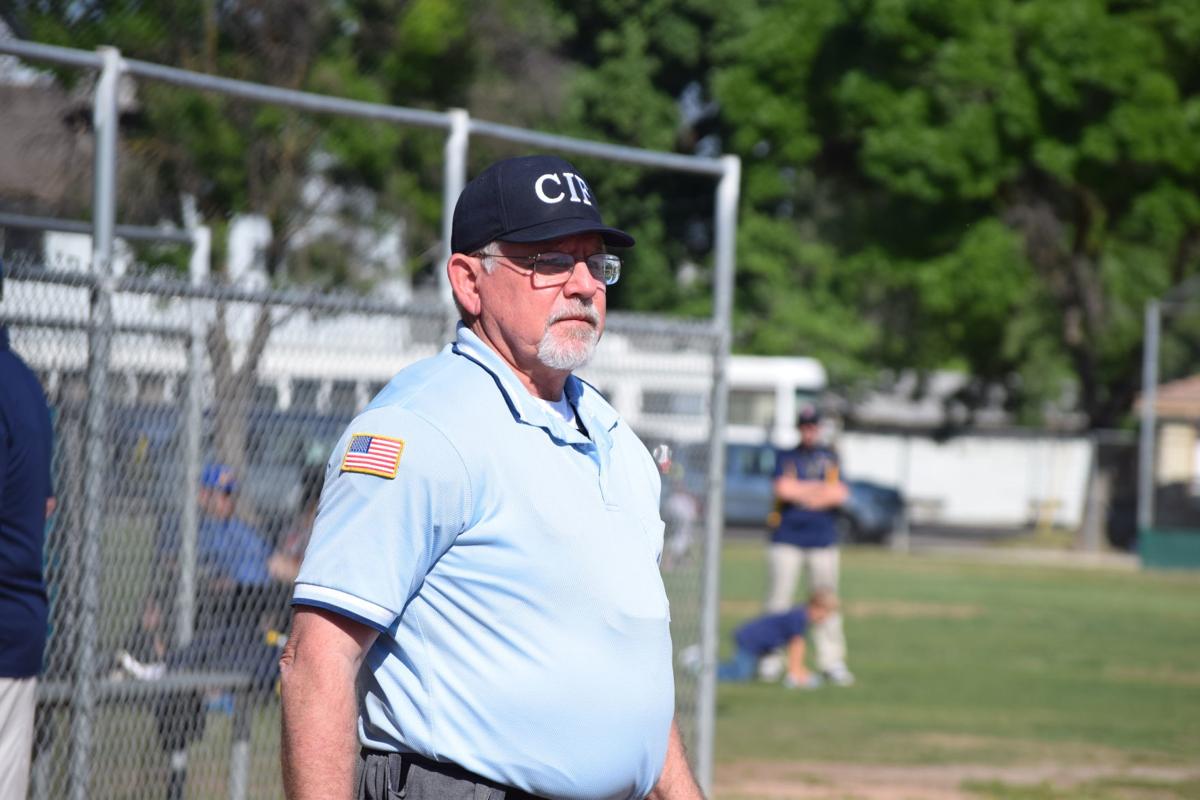 Rainer "Wink" Otto Winckelmann had an outstanding officiating career of more than 40 years. Wink recently passed away on May 10. 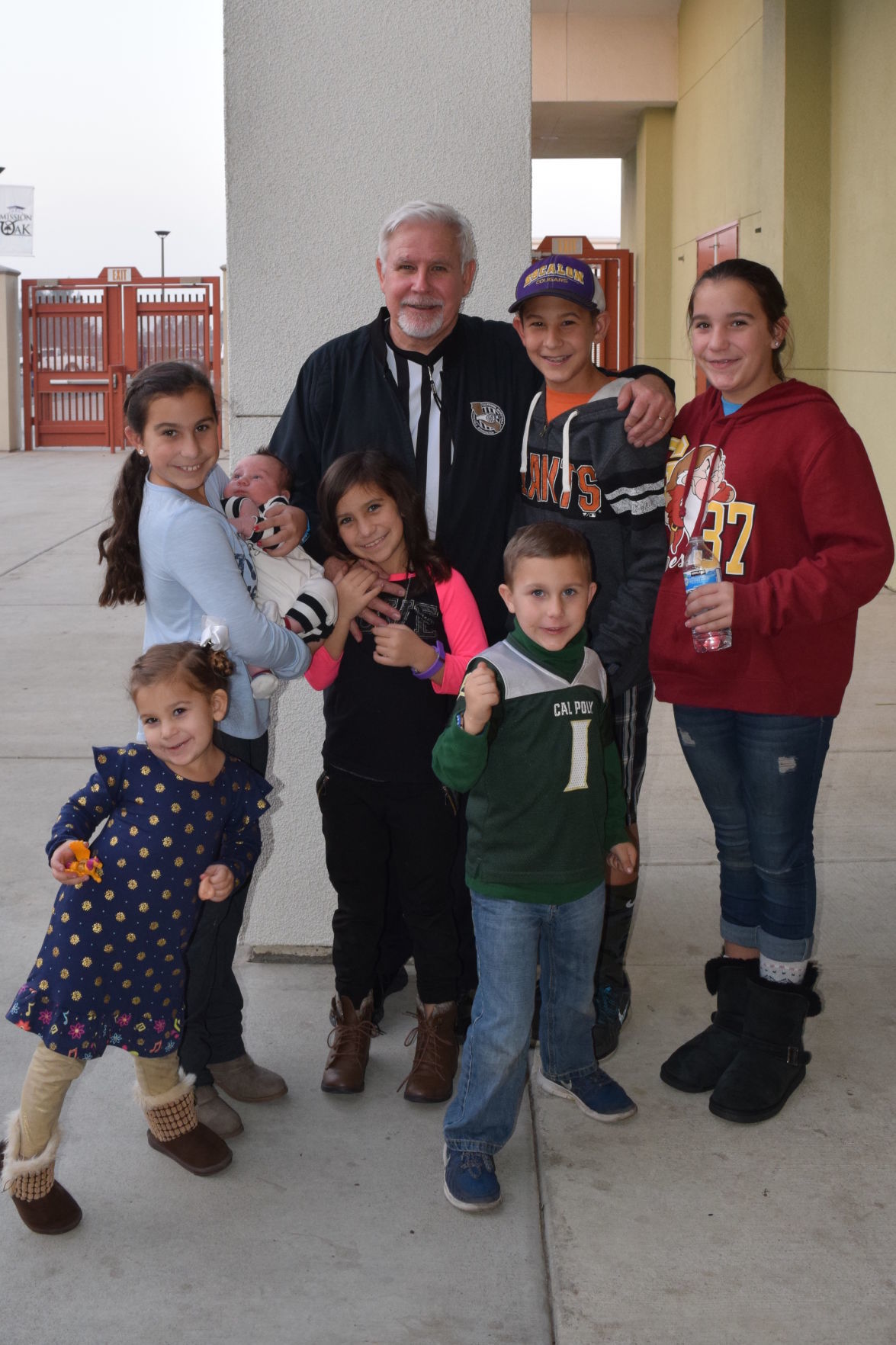 Wink poses with seven of his nine grandchildren after officiating a basketball game in March 2016. 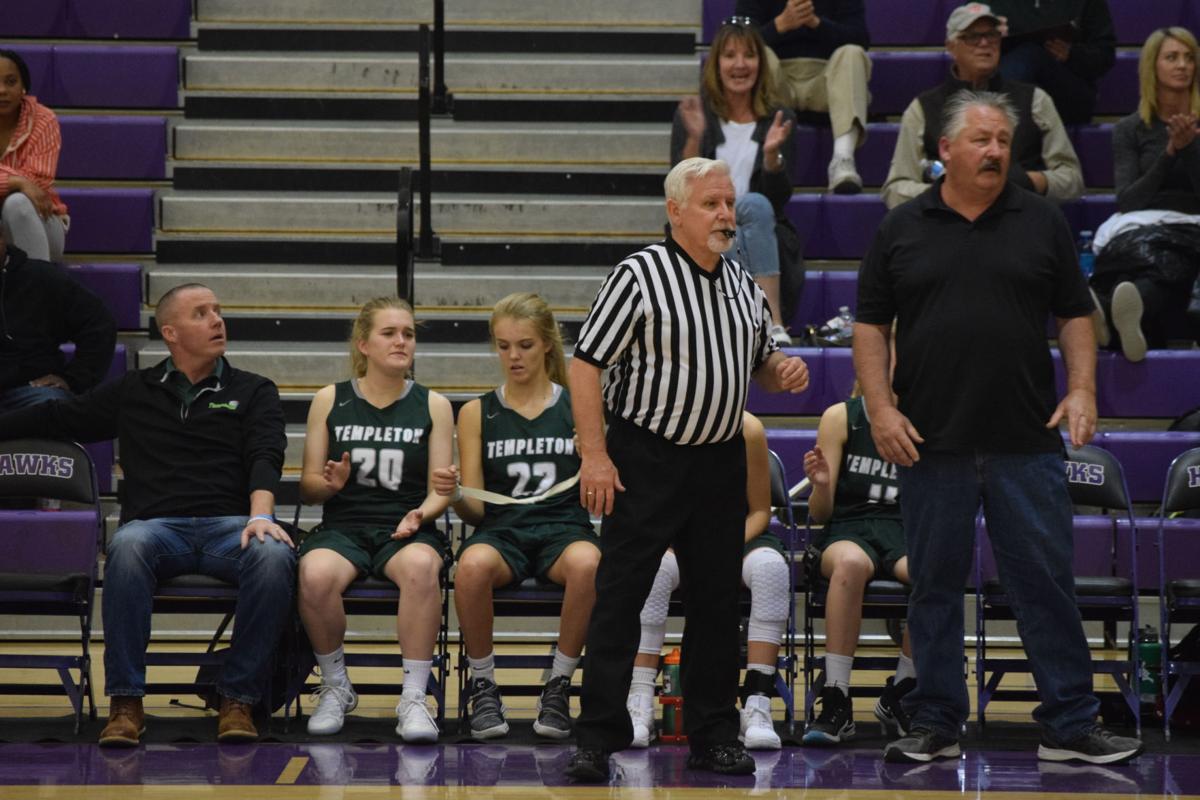 Wink (center) officiates during a girls basketball game in December 2017. 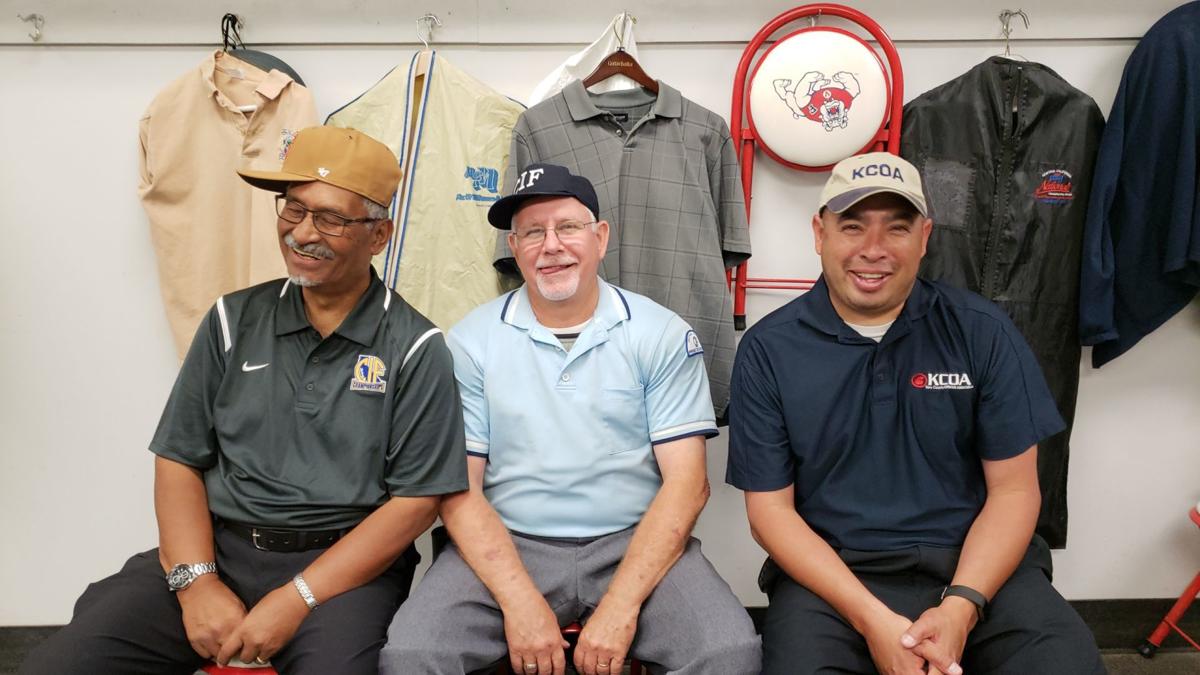 Wink poses with friends in an undated photo. The longtime official was Deputy Umpire in Charge of USA Softball of Central California for 14 years. 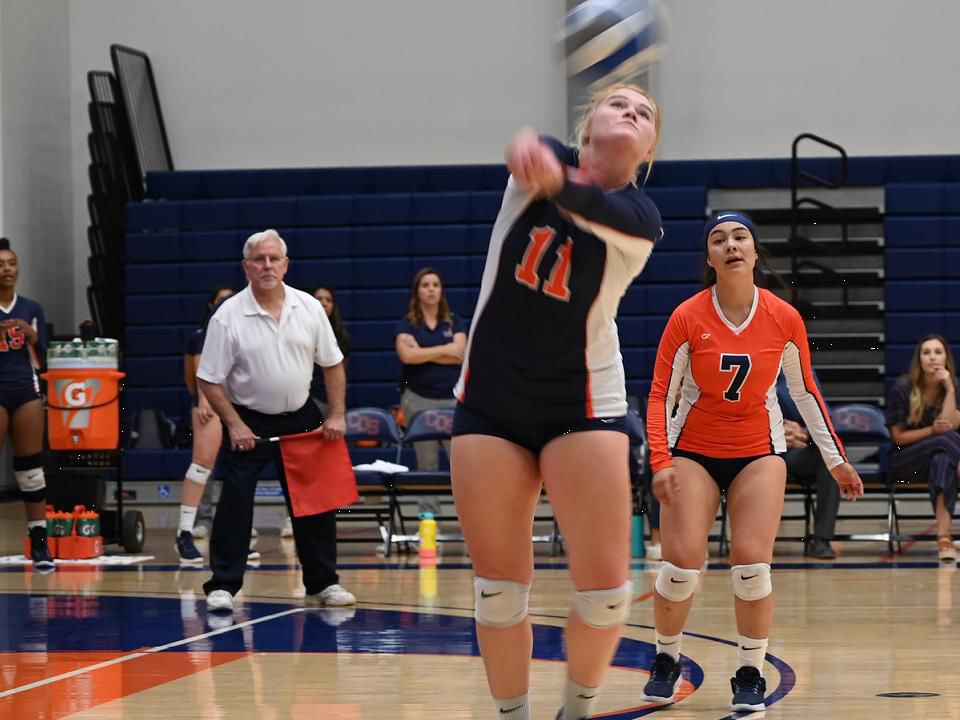 Wink (left) became an official in volleyball in 2013 and was already becoming one of the top officials.

HANFORD — For more than 40 years, Rainer Otto Winckelmann brought a high level of officiating to any sport he touched.

“If anybody knew the rules of officiating, it was Wink Winckelmann,” Tom Dowd, commissioner of USA Softball of Central California, said.

The longtime umpire, referee and official — known to friends and family simply as “Wink” — passed away at his home on May 10 from complications due to end stage pancreatic cancer. He was 69 years old.

Wink was a referee in basketball and football, umpire in softball and baseball, and an official for volleyball. The latter he started officiating in 2013 and was already beginning to make strides in the sport as the Vice President of the Central Valley Volleyball Officials Association.

“Volleyball’s something he just started and he had a real desire to learn the rules, the proper methods, and he was working his way up to being a top official,” Tim Parcel, president of Central Valley Volleyball Officials Association Umpires, said.

Wink was also the Deputy Umpire in Charge of USA Softball of Central California for 14 years and “was always available for anything and everything you needed him to do,” Dowd said.

After being appointed as the commissioner, Dowd appointed Wink as the Deputy Umpire. Aside from his knowledge, Dowd said Wink was a “natural” for the position.

Wink had a relentless devotion to officiating, taking a laptop to his daughter’s home in case a tournament needed to be rescheduled or if someone became ill.

“For me, I was like, ‘Dad, you’re not making very much money. You put way more hours than you get paid,’” Jamie Dugo, one of Wink’s three children, said. “But now that I meet everybody, I just think that was extended family to him and he just loved umpiring. It was just a passion of his.”

Wink served in the Vietnam War and spent four years in the Navy. He then spent 42 years in civil service in the weapons department as the Explosives Safety Officer in Alameda and Lemoore.

Alameda’s where he started what would become a more than 40-year journey in officiating. Mike Phelps, a former friend and umpire of 30 years, still recalls how he got Wink to become an umpire.

“Being a good fan, he would holler at the umpires every once in a while,” Phelps said. “We’d joke around with him back and forth.”

But one day after a game, Phelps called Wink over.

“I said, ‘You know this is not as easy as what it looks like. If you think it is, you oughta come out and try it,’” Phelps said.

Wink initially laughed off the comment, but a couple weeks later, he went to Phelps and said, “Yeah, I’d like to actually try that.’

The rest, as they say, is history.

Wink became an umpire for the Amateur Softball Association, now known as the USA Softball of Central California. He, “aced the test as I remember,” Phelps said.

Phelps was also there for Wink’s first women’s ASA game at Saint Mary’s College of California. The two rode up together with a nervous Wink asking question after question during the car ride.

But after introductions and the usual pregame routine, Wink showcased his ability.

“He worked the bases, I worked the plate and he was nervous the whole game, but he made some good calls, was always in the right position, so after that, he felt more comfortable,” Phelps said.

The two would umpire a multitude of baseball and softball games during their three years together before Wink transferred to Lemoore. But the two continued to stay in contact with Wink even coming to Phelps’ retirement in 1995.

“The very first thing I always remembered about Wink was his nice mustache and his smile,” Phelps said. “He had a deceivious smile.”

Phelps also described Wink as personable, a good leader, and said he stood his ground in umpiring, while handling the heckling from fans.

Dowd referred to Wink as “a great guy” and a “great individual.” “He put everybody else in front of him,” he said.

Off the field and court, Dugo said Wink loved to visit his parents in Virginia, spend time with his grandkids, BBQ and hanging out by the pool.

“The best thing was always when he came here to my house just the way he lit up being outside on the orchard,” Dugo said. “He would drive the mule with the kids. It was like his fun time.”

The funeral is set for July 17 at Grangeville Cemetery at 10:30 a.m. with military honors. The American Legion Riders will escort the family to Hidden Valley Park for lunch.

HANFORD — Another Black Lives Matter protest will be taking place at the Hanford Civic Auditorium on Friday.

HANFORD — FAST Federal Credit Union is stepping up in a big way for small businesses for Kings County.

100 Years Ago in Kings County…

The Hanford Water Company has asked the Railroad Commission for authority to make a 20 per cent increase in its charges for water. In its appl…

HANFORD — A man was arrested during a traffic stop after a search of his vehicle yielded meth and a loaded rifle, Kings County Sheriff’s offic…

HANFORD — As California continues to deal with issues regarding the state’s lab reporting system, Kings County hopes to have updated COVID-19 …

HANFORD — Kings County Sheriff’s deputies arrested a man Wednesday after they said he yelled at staff and demanded entry into a county building.

Rainer "Wink" Otto Winckelmann had an outstanding officiating career of more than 40 years. Wink recently passed away on May 10.

Wink poses with seven of his nine grandchildren after officiating a basketball game in March 2016.

Wink (center) officiates during a girls basketball game in December 2017.

Wink poses with friends in an undated photo. The longtime official was Deputy Umpire in Charge of USA Softball of Central California for 14 years.

Wink (left) became an official in volleyball in 2013 and was already becoming one of the top officials.