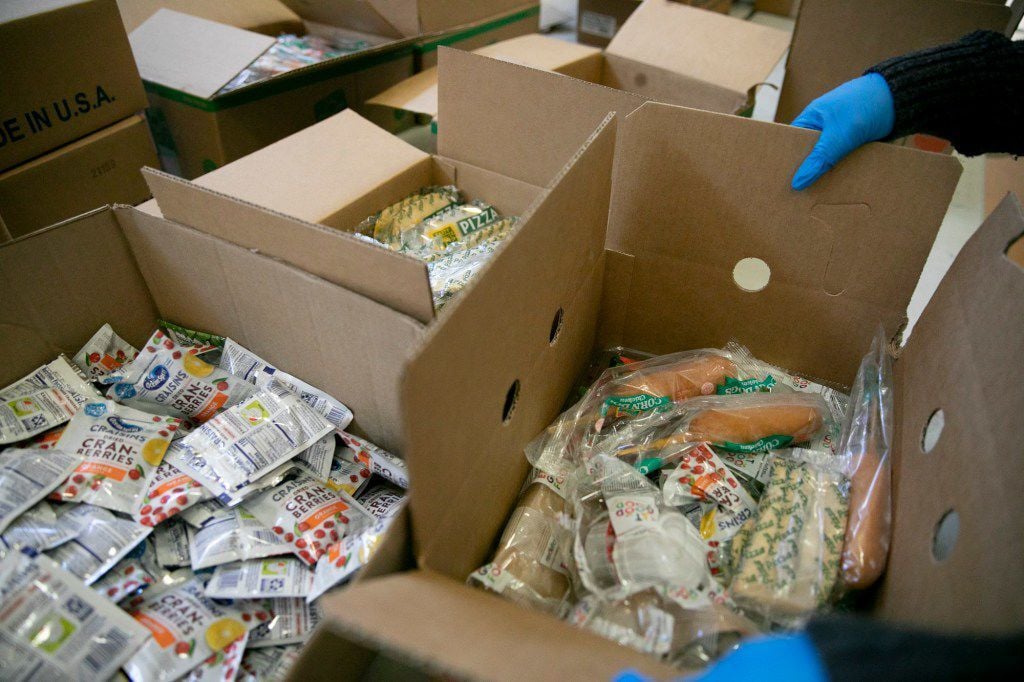 District employees prepare boxes filled with breakfast, lunch and snacks for Oakland Unified students at La Escuelita on June 7, 2021. Families can request or pick up one box per child enrolled in district schools. 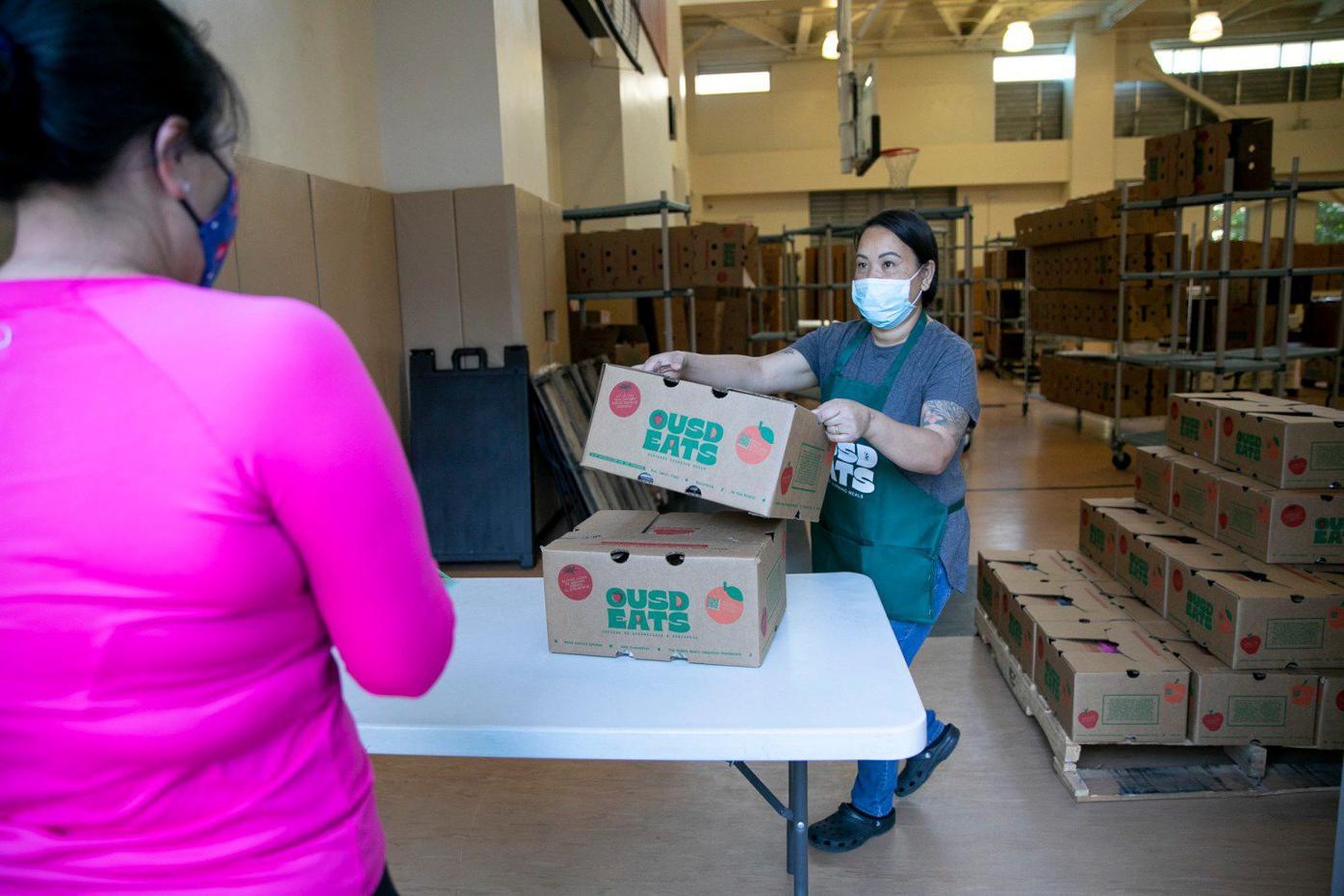 Food service manager Nakheu Saephanh hands out boxes of food to family members at La Escuelita in Oakland on June 7, 2021. Oakland Unified has been providing boxes for pick up or delivery containing seven days worth of breakfast, lunch and snacks to all students since spring 2020.

District employees prepare boxes filled with breakfast, lunch and snacks for Oakland Unified students at La Escuelita on June 7, 2021. Families can request or pick up one box per child enrolled in district schools.

Food service manager Nakheu Saephanh hands out boxes of food to family members at La Escuelita in Oakland on June 7, 2021. Oakland Unified has been providing boxes for pick up or delivery containing seven days worth of breakfast, lunch and snacks to all students since spring 2020.

Early in the pandemic, the only source of milk for some struggling families was from school lunches, recalls Stacy Johnson, director of nutrition services at Glendora Unified School District.

Even for families who weren’t as strained financially — or for families of picky eaters — getting meals during lockdown was something to get excited about: A chance to get out of the house, and to see teachers and friends.

And while the days of empty grocery store shelves and lockdowns have passed, for many, the benefit of meals at schools continues.

At Sellers Elementary in Glendora, east of Los Angeles, that was evident by the busy meal service last Friday. At pickup time, parents walked younger students home carrying bags filled with food, enough to last through the weekend, while older students jammed the bags into their backpacks.

“My kids eat at school here during the year at the cafeteria when it’s open just because they love the experience of seeing other kids and going through the line,” Julie, a parent of students who asked to be identified only by her first name, said Monday.

Before the pandemic, in January 2020, the district served more than 35,000 lunches to students. In April 2021, with the return of in-person classes, 50,822 lunches were picked up. The district, where about 29% of the 7,200 students were eligible for free and reduced meals last year, continues to serve take-home lunches to students as it wraps up its school year.

The help to families, along with support from dozens of children’s nutrition advocacy groups, is behind the state’s push to continue free school meals for all students past the pandemic.

Last week, legislative budget leaders unveiled a deal that includes $650 million for the Universal Schools Meal Program, which would allow schools to serve free breakfast and lunch year-round to all students — no paperwork or eligibility checks required.

If approved in budget negotiations this week between the Legislature and Gov. Gavin Newsom, the program would be funded by the influx of state money from taxpayers and federal aid. The state would take over the program — funded during the pandemic with federal money — beginning in the 2022-23 school year.

In the 2019-20 school year, more than 3.6 million California students received free or reduced price meals — nearly 60% of all students in the state, according to the California Department of Education. In the 2020-21 school year, even during the pandemic, about 3.5 million students were served.

The legislature’s proposal calls for a $54 million increase in state reimbursements for the 2021-22 fiscal year, then $650 million a year starting in the 2022-23 fiscal year to cover the costs of offering breakfast and lunch for all public school students.

Newsom, meanwhile, proposed $150 million a year in his May budget to encourage public school districts to participate in programs that allow high-poverty schools to provide meals to all students without requiring applications.

While the Legislature’s price tag is significantly higher, lawmakers expect that reduced paperwork and overhead costs will reduce the cost.

Also, a Senate Education Committee analysis of a similar bill authored by Sen. Nancy Skinner, a Berkeley Democrat and chairperson of the Senate Budget Committee, noted that immigration status, language barriers or lack of awareness could be preventing students who qualify for the free or reduced meals from receiving them.

Kathy Saile, director of the California chapter of the national advocacy group No Kid Hungry, said offering free school meals to all will increase participation, reduce stigma for students and improve nutrition for children.

“The Legislature’s budget proposal will help ensure all of California’s kids have access to the healthy meals they need to learn and thrive, and we urge Governor Newsom to approve this funding,” Saile said in a statement.

Laura Howe, a resident of Salida, in Stanislaus County, remembers the ease of being able to have her kids eat breakfast at school when they were young and she had to go to work early.

“Hungry children can’t learn,” she said. “Whenever your belly is growling, you’re not learning.”

Howe now works as a nutrition services supervisor at the Manteca Unified School District in San Joaquin County, and she sees the benefits it could bring to schools, too: less time and resources spent on paperwork, and cost savings in the long run.

Under free and reduced meal programs that were in place pre-pandemic, school districts had to pay the difference when students can’t or don’t pay. That can total hundreds of thousands of dollars. Under the Legislature’s plan, that gap would disappear, with federal reimbursements and state aid.

And while Howe is glad to see the state’s initiative, she hopes to see similar initiatives at the federal level — the primary source of districts’ funding.

During the pandemic, the federal government gave $13 billion to support school districts around the U.S. for food programs, sanitization measures and technology needs.

Schools did have some early roadblocks during the pandemic — a major one was supply shortages. But Howe said the Manteca Unified School District was still able to provide breakfast and lunch, as well as snacks and supper. And that helped families who normally wouldn’t receive the free meals.

“I’ve talked to parents that are just my friends that don’t qualify,” Howe said. “They were so thankful.”

Sameea Kamal is a reporter/production assistant at CalMatters. She joined CalMatters in June 2021 from the Los Angeles Times, where she was a News Desk editor.