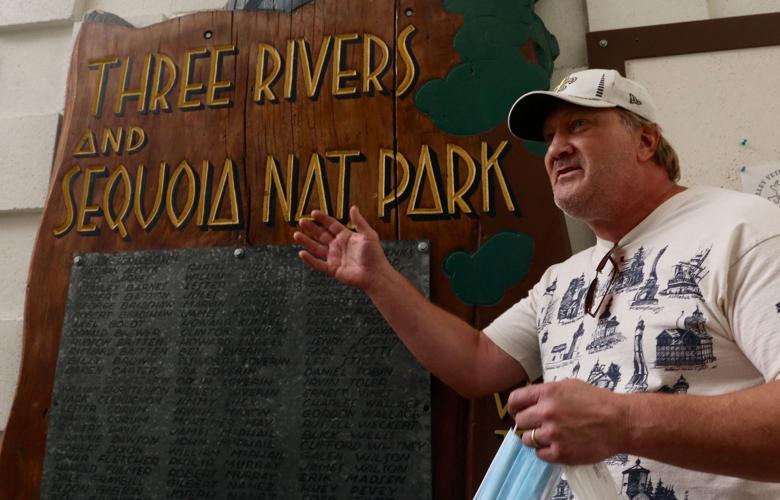 Tom Prukop, a Three Rivers resident, was forced to evacuate the town Tuesday. In this photo taken Friday morning, he seeks information at the Memorial Building which serves as a makeshift headquarters for the Southern Area Blue Incident Management Team. 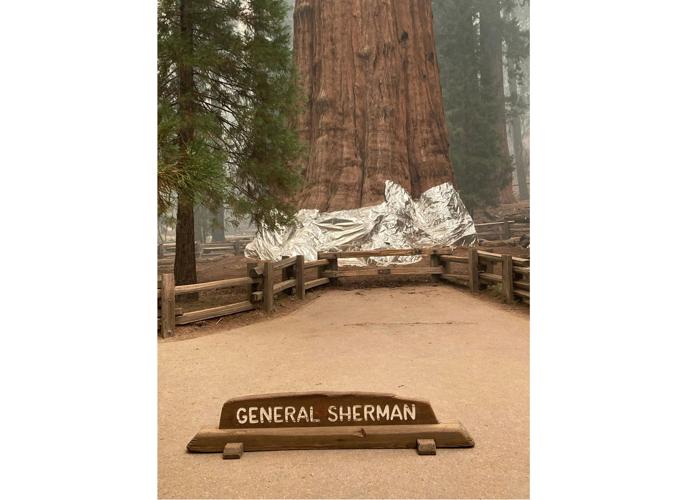 This photo provided by the Southern Area Blue Incident Management Team on Thursday, Sept. 16, 2021, shows the giant sequoia known as the General Sherman Tree with its base wrapped in a fire-resistant blanket to protect it from the intense heat of approaching wildfires at Sequoia National Forest. 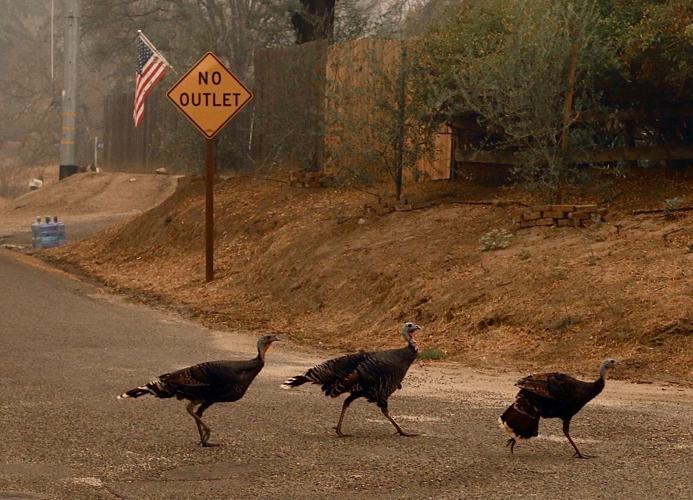 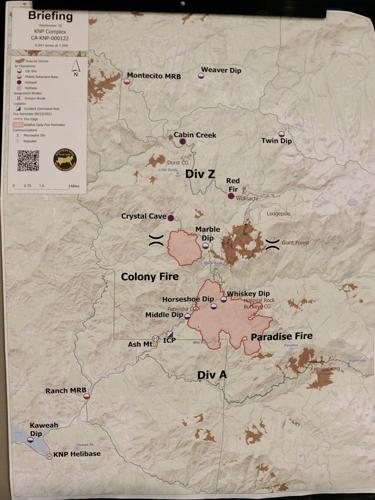 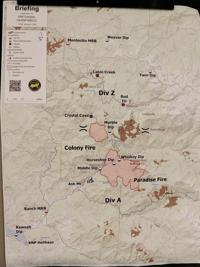 A map at the Veterans Memorial Hall in Three Rivers shows the location of the fires currently threatening the town and groves of sequoia trees in the adjacent national parks. 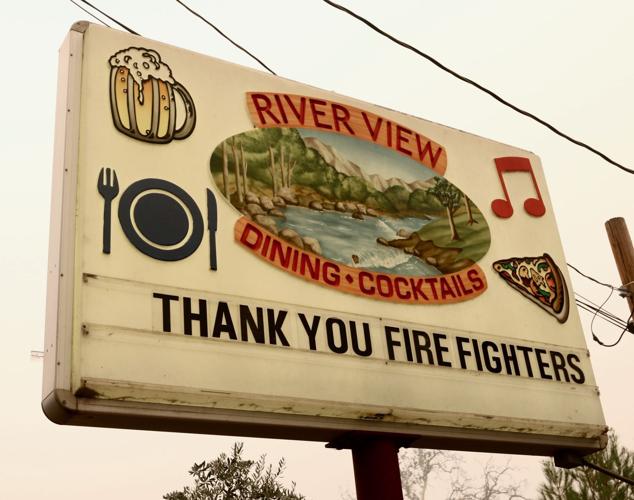 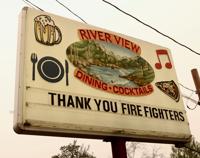 A business sign in Three Rivers displays a message of gratitude for firefighters battling blazes near the town Friday.

Ash continued to fall Friday from skies choked with brown, pungent smoke over the small town of Three Rivers at the entrance to Sequoia and Kings Canyon national parks.

Tom Prukop, who has been a part of the community since 1965 when his father and uncles bought a house in the town of nearly 2,500 residents, is one of many holding their breath, hoping their homes will be saved as firefighters and land management officials battle the KNP Complex Fire sparked by lightning on Sept. 11.

Prukop, his wife and son, and their neighbors were ordered to evacuate Tuesday — the Prukops have been staying at a hotel since then and following the fire's growth as closely as possible. This includes traveling to the Memorial Building, which serves as a makeshift headquarters for the Southern Area Blue Incident Management Team, to gather information.

“We’ve been there for 50 years and I’ve never seen anything like this," Prukop said Friday. "This is unusual — very unusual — and of course the only good thing about this is that it was naturally started by lightning rather than arson. If it was arson, I would’ve been so angry.”

At the Three Rivers Memorial Building, staff are coordinating with the US Forest Service, Cal Fire, the Bureau of Land Management and other county, state and federal entities to manage the fire and protect the town.

As of Friday morning, 11,365 acres of land have burned and 416 firefighters are fighting the blazes that make up the fire complex — the Colony fire, which is threatening the park's world-renown Giant Forest and the Paradise fire, which is burning near the park entrance and the town of Three Rivers.

It's the No. 1 priority fire in California, according to Fire Information Officer Rebecca Paterson, a spokesperson with Sequoia-Kings Canyon National Parks who is attached to the Incident Management Team.

"The fire behavior is expected to be fairly moderate, at least for the next few days, and that's because of the weather, and there's not much wind, or things of that nature," Paterson said. "So we're anticipating growth, but not real explosive growth over the next couple of days."

Firefighters have placed a fire-resistant aluminum wrapping around the base of the General Sherman Tree in the Giant Forest, the world's largest by volume at 52,508 cubic feet (1,487 cubic meters), as well as some other trees and buildings to protect them from potential flames.

The material can withstand intensive heat for short periods and has been used in national parks and forests for several years throughout the West to protect sensitive structures.

A major element of the grove's defense is decades of prescribed burns — fires intentionally set to clear the forest floor of vegetation that could feed bigger blazes — and thinning projects to remove small trees that could become ladders carrying fire up to the crowns of the giants.

A fire in the region last year killed thousands of sequoias, which grow as tall as high-rises at certain elevations on the western slope of the Sierra Nevada.

The Associated Press contributed to this article.