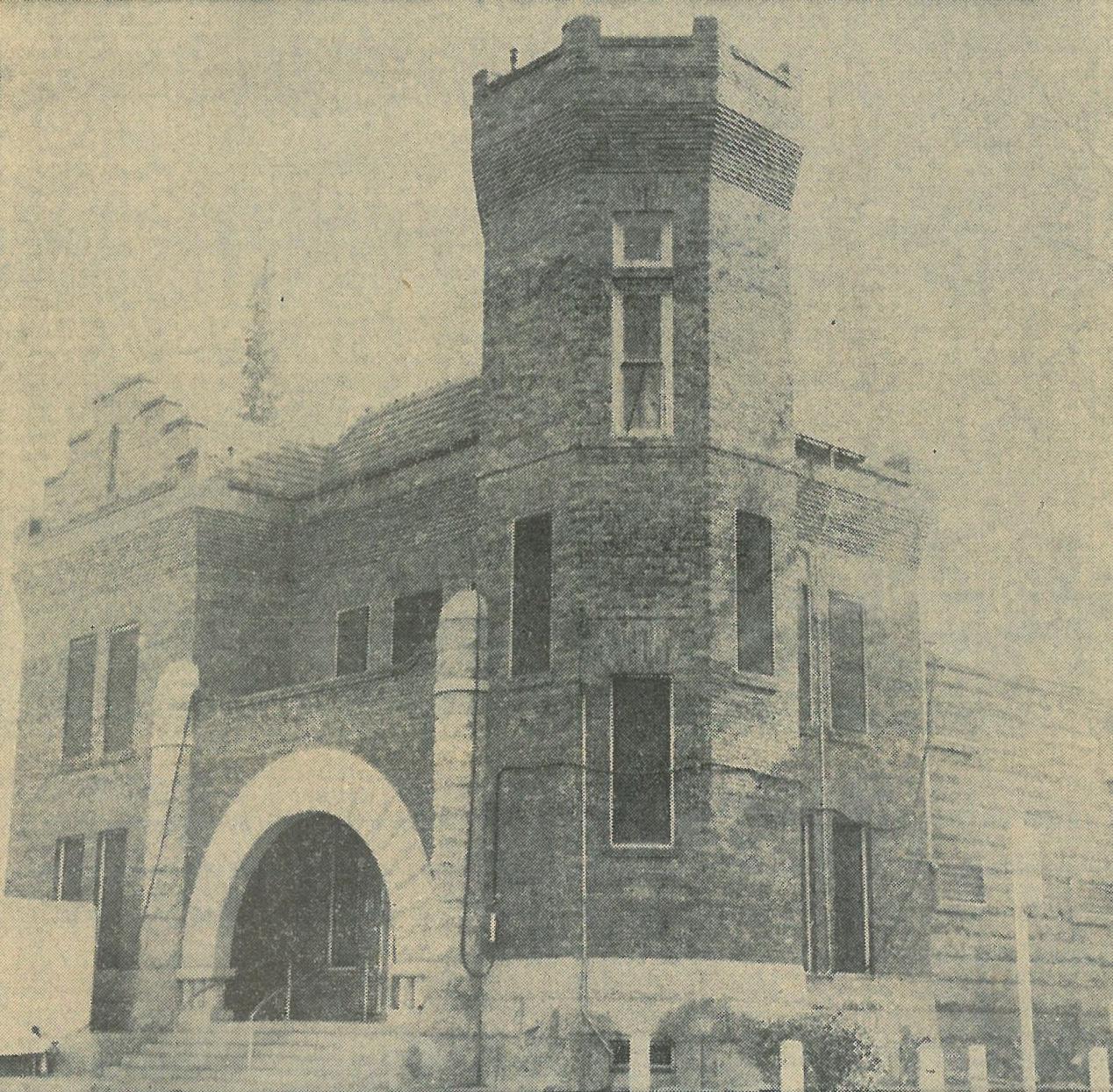 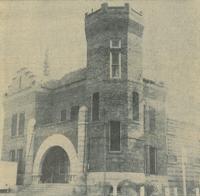 The Bastille's famous penny floor is seen in summer of 2021.

The Bastille's ground floor as seen from above in this photo from May 2021.

A gargoyle mural still adorns the wall in The Bastille.

One of the Bastille's solitary confinement cells-turned private restaurant booth is shown. 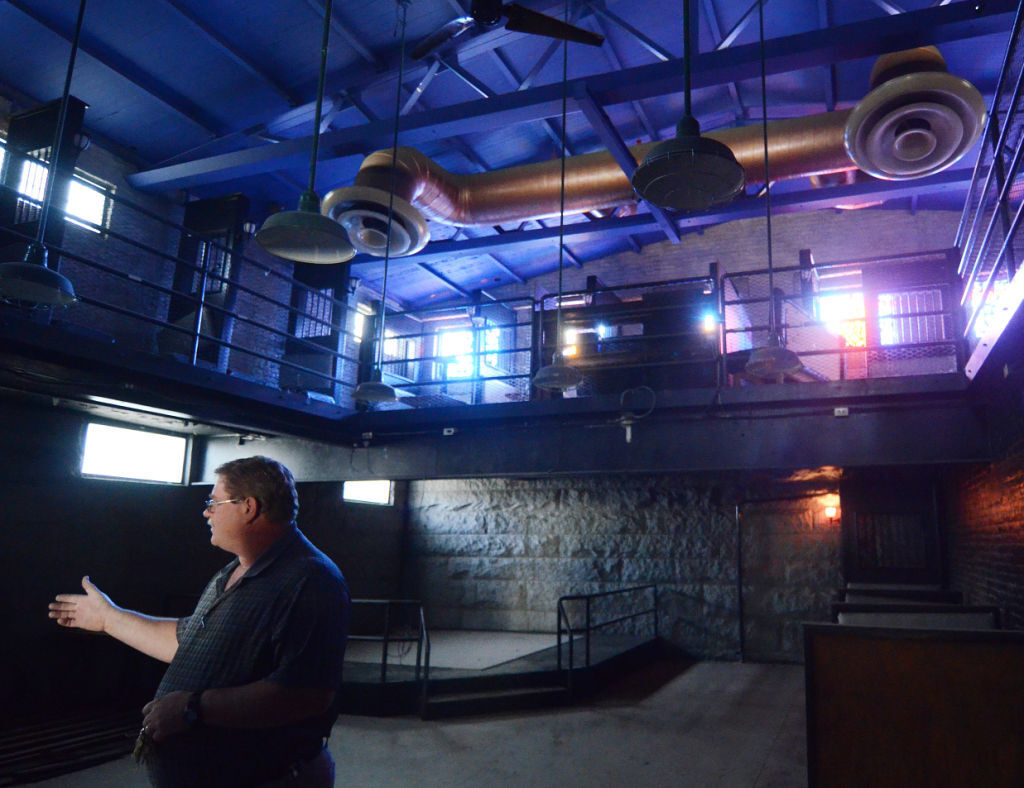 Randy Shaw, City of Hanford's building superintendent, talks about the condition of The Bastille in this 2014 file photo. 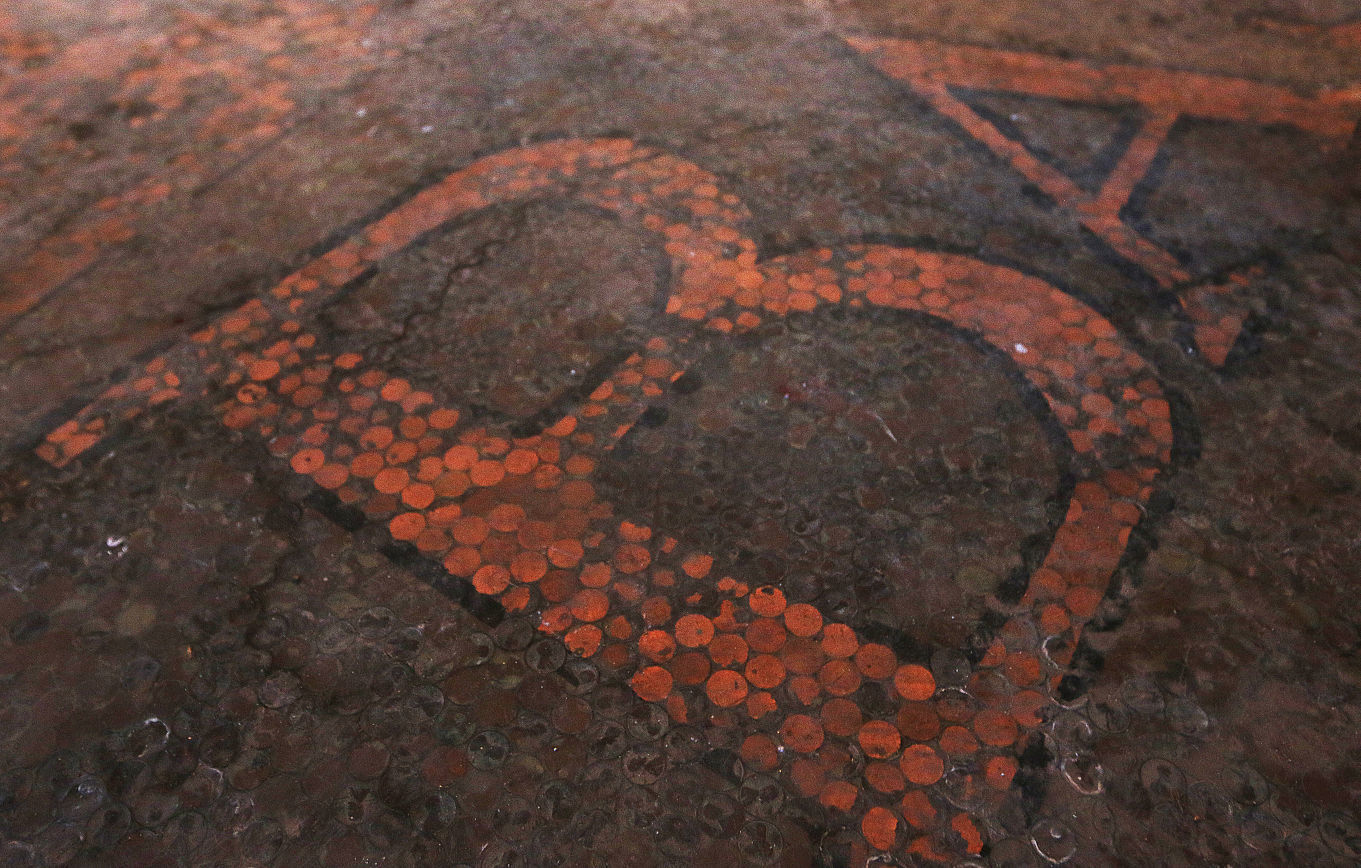 The penny floor still visible inside the Bastille in downtown Hanford in this 2016 file photo.

The Bastille's ground floor as seen from above in this photo from May 2021.

A gargoyle mural still adorns the wall in The Bastille.

One of the Bastille's solitary confinement cells-turned private restaurant booth is shown.

Randy Shaw, City of Hanford's building superintendent, talks about the condition of The Bastille in this 2014 file photo.

The penny floor still visible inside the Bastille in downtown Hanford in this 2016 file photo.

The ghosts of the Wild West can still be found at The Bastille.

The beloved and historic building, which towers above Hanford's Civic Park, served as Kings County's jail and sheriff’s office from 1897 until 1964.

The area of the county was once part of a much larger Tulare County before splintering off in 1893. While Hanford had already been an incorporated city for two years, the fledgling county needed a headquarters.

Exeter Granite Works won the award to construct the building, which proved controversial as a local contractor, Frank Sharples, felt he had been cheated out of the award.

“You hear the stuff these days and it happened back then. They had the same arguments, the same issues,” said Randy Shaw, building superintendent for the city of Hanford.

Sharples, a prominent entrepreneur known throughout the Valley, could be assumed to be a tough and shrewd businessman. According to the May 12, 1891 issue of the Hanford Weekly Journal, Sharples was shot through the neck by an aggrieved business associate who claimed Sharples owed him money.  Despite reportedly throwing his hands up and saying, “Don’t shoot, I’m killed” after the shot, Sharples fully recovered.

While coming with a hefty price tag for the time, the money was well spent.

“The craftsmanship to put the iron bars into solid granite is just amazing,” Shaw said, of the solitary confinement cells.

According to a Sentinel story from 1907, no criminal had ever escaped from the jail.

The lower portion of the jail was for the general population. Cells upstairs were reserved for those deemed "sick or insane" according to the same Sentinel story. Sometime later in its use, the upstairs would house female and juvenile offenders. The average number of prisoners at any one time, as of 1907, was around 10.

While the jail proved exceptionally sturdy, with most of its large, nearly vault-like security measures still in place, it wasn’t necessarily a place for hardened criminals. Shaw said that most of the early day’s populace was likely drunken troublemakers and petty criminals.

Though, there were likely exceptions. Shaw recalls a second-hand story he heard from a custodian who worked in the Courthouse in the ‘40s about a man years earlier who was so aggrieved by a court ruling that he rode his horse through the building and upstairs to confront the judge in question.

“It was the wild west,” Shaw said. “I’ve seen bullet holes in the trim around the Courthouse. It’s pretty cool.”

The jail was built to house 60 inmates but when the jail moved to the newly-built County Center, The Bastille held around 260, Shaw said.

When the jail closed in 1964, The Bastille was used for file storage and may have stayed that way indefinitely if not for the efforts of the Kings County Art League, which petitioned the City Council for the building’s use as an art gallery.

The Art League, originally formed in 1946, opened its new home, dubbing it The Bastille Gallery, Kings County Museum of Art.

Eventually, the Art League moved to the Kings County Art Center on Douty Street and The Bastille became the home of a rotating number of bars and restaurants.

Richard Neill, one of the building’s restaurateurs, oversaw a project that The Bastille has become synonymous with since.

"I get the question all the time, ‘are the pennies still there,’ " Shaw said.

Civic Auditorium: The center of Hanford in every way

While buildings across Europe and Asia remain standing after thousands of years, it’s quite different in America. As a nation, our concept of “old” is relatively recent and oftentimes not given much reverence. If something is decades old, we smash it down and replace it with a parking lot. The old Hanford Firehouse is one notable example.

Another question Shaw gets a lot is just how many pennies line the floor of the building?

“Well no one wants to come in here and count them all,” he joked.

The question may remain a mystery as the installation was done over a lengthy period of time by many volunteers and, simply, no one kept count. Shaw has heard the estimate of 200,000 pennies, though he doesn’t believe it’s quite that many.

Other changes came to the building over the years, including the removal of most of the second-story floor, the installation of stained-glass windows and an addition was built for restrooms. As a jail, each cell had its own toilet, something that — for obvious reasons — would not translate well in the new version of The Bastille as a restaurant and bar.  A fire escape was also installed, which connects to the Old Courthouse next door.

The Bastille has been vacant since 2009 when its previous tenant, who operated it as a nightclub, was evicted for owing thousands of dollars of back rent, according to a Sentinel story from the time.

While the building has been empty for more than a decade, however, locals say it may still be inhabited.

Legend has it that a woman named Mary hanged herself while she was an inmate in the upstairs portion of the jail. Apparently, Mary is the most famous of The Bastille ghost stories.

"They think there's three," Dave Jones, then-executive director of the Hanford Conference and Visitor's Agency told the Sentinel in 2010. "They did some research. The only one we're aware of is Mary."

Local business owner Jessica Szalai said that she's had a couple of paranormal encounters at The Bastille.

While visiting The Bastille during a Kings County Action Organization dinner meeting, she felt her eyes transfixed on the top floor.

"We ate and I kept looking up to the second floor balcony. One of the servers whispered in my ear, 'Do you see it?' I was so focused on the balcony I didn’t look at the waitress I just said, 'I don’t know why I keep looking up,'" said Szalai, who owns Beautifully Damaged in downtown Hanford.

The server offered to give the group a tour of the upstairs area after their meal.

"I looked up and I saw a dark shadow like a silhouette of a man standing next to the rail, I was startled," she said.

Noticing her reaction, the restaurant manager told them the story about a prisoner that hanged himself on the top floor in the exact spot Szalai's eyes were drawn to.

While Shaw has heard strikingly similar stories, he's still reluctant to believe it until he sees something for himself.

“I think it’s 90 percent in their heads and 10 percent maybe something’s going on,” Shaw said. “I’ve worked here 12 years and I’ve worked here all hours of the night and I’ve never seen anything, but that doesn’t mean other people haven’t.”

Shaw said that although he doesn’t necessarily believe the stories, he has talked to many people that do. He’s also not inclined to discourage any of the spooky chat, as any attention given to the old building is considered good attention.

Photos: The Bastille is a reminder of Hanford's Wild West days

What should be done with the Bastille?

How did Hanford end up owning the Bastille?

Is the Bastille Haunted?

Here's what some locals had to say via Facebook about the Bastille and other so-called haunted places of Hanford:

"I went to dinner there years ago (actually sat inside one of the cells to eat). Several times during dinner there was the sensation of a firm hand on my shoulder. That was enough for me, never went back."

"Spent the night there once... There are residents there."

"When we took our third graders through, the guide made sure that we said, 'Hello, Mary' upon entering and, 'Goodbye, Mary' as we left."

"I worked there from 1996-2001. The water in the bathroom sink used to turn on by itself when I would be nowhere near it."

"I remember the tower had rope marks supposedly from when they used to do execution hangings when it was a jail back in the day but I don’t know even if that’s true."

"We had knocking on the walls, we saw people walk into the bathroom and not come out and so on. It is haunted."

— Alice Quezada on The Artesia Building

"Carnegie just has Alice the librarian. She doesn't like her chair to be moved and she'll move it back sometimes to the right corner."