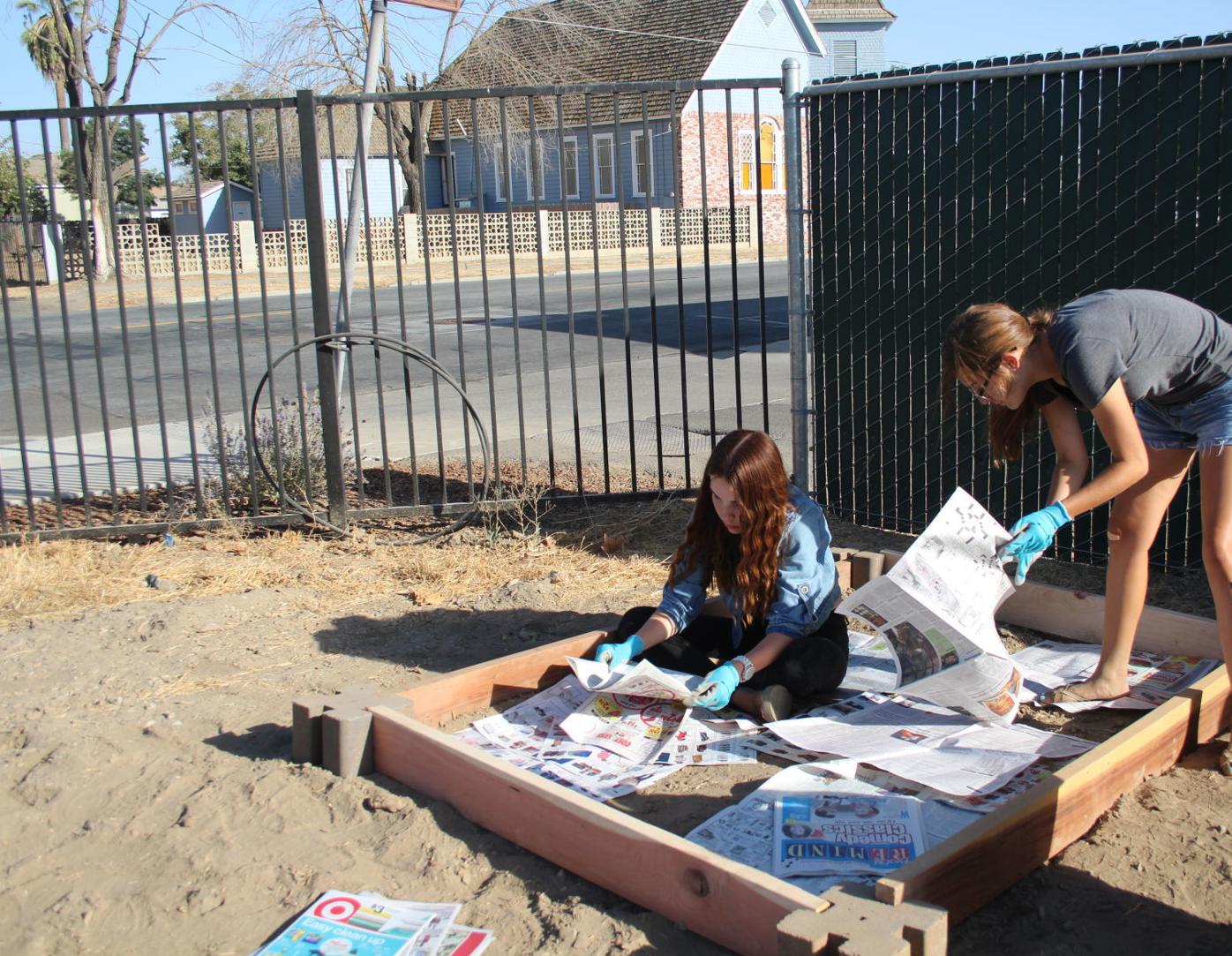 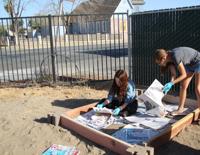 Some of the teens read parts of the newspaperbefore putting them in their planter boxes to help prevent weeds. 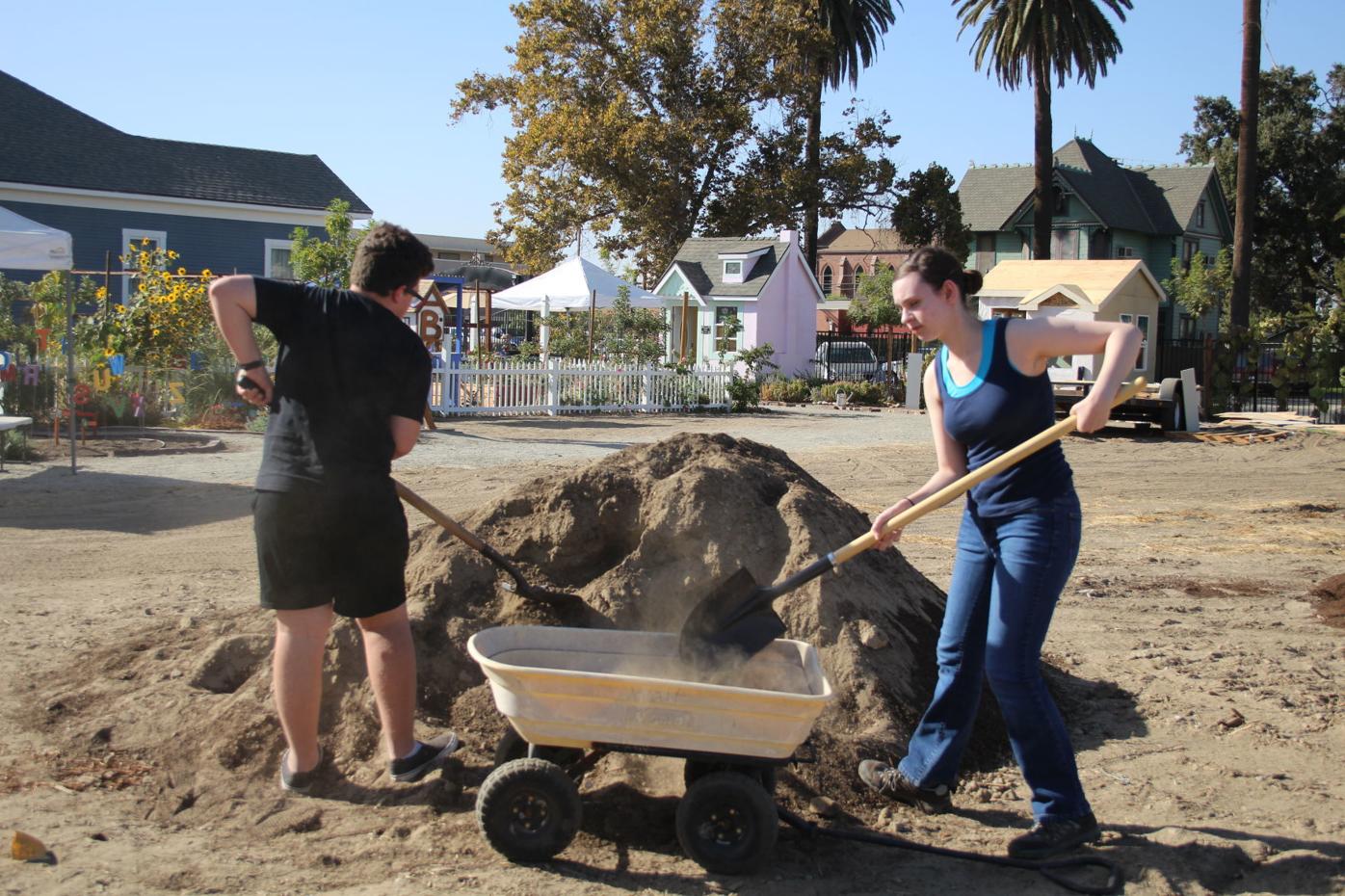 Teens shovel dirt to use in their garden beds at Storybook Garden.

Some of the teens read parts of the newspaperbefore putting them in their planter boxes to help prevent weeds.

Teens shovel dirt to use in their garden beds at Storybook Garden.

HANFORD — After learning about the importance of character and values like integrity, patience and forgiveness, a group of teenagers headed to the back of The Storybook Garden to work on their latest project.

Judy Wait, one of the founding members and board president of The Storybook Garden, runs the Green Teens program and said she puts an emphasis on the teens learning more than just how to plant plants.

The Green Teens is an after-school program that teaches teens about gardening as well as general life lessons. It is put on by the Storybook Garden, a nonprofit organization that aims to educate children in healthy eating, fitness, gardening, literacy and myriad of other topics.

Before the teens build a few more planter boxes to grow their winter crops, Wait teaches them about what crops can be grown in the winter and the important social skill of forgiveness.

Each Thursday, the teens learn a way to incorporate a fruit or vegetable into their diet, a portion of the agriculture process from growing to selling produce and a social skill. Every week they learn something different and are encouraged to write about what they learn in a journal, if time permits.

The group meets for an hour and 15 minutes and has a packed agenda.

Wait said that they try to keep the kids well rounded in their growth process by learning not just about gardening.

Between shoveling new soil into the planter beds, Kathryn Caitlin “KC” Forbes, 18, said that she found out about the program through a tweet that the library sent out.

KC said she decided to come because she enjoys growing her own plants.

“Growing stuff is just nice because you can eat sometimes and if not it is something nice to look at,” KC said.

While walking back from getting more newspapers to put in the bottom of the planter boxes, Rebecca Gagne, 16, explains that aside from school work she doesn’t have much to do on Thursday’s which is why she decided to join the Green Teens program.

“I keep coming back, so I guess I like it,” Rebecca said.

She also said she likes nature which is why she likes gardening.

Wait said that several of the students are either returning from last year’s Green Teens program or have been volunteers with the garden’s programs.

Kaitlynn Lowe, 16, has been volunteering on Saturdays at the garden. Her mother, Kristi Spalding, said that Kaitlynn started volunteering in the summer and has enjoyed it thoroughly.

Spalding said that she appreciates the mentorship Kaitlynn has received at the Storybook Garden. She said that a lot of the life lessons she has told Kaitlynn have been reinforced by the staff, volunteers and other teens. Some of those lessons are getting involved in things that matter, preparing for college and being a good person, Spalding said.

Since joining Green Teens, Kaitlynn’s brother and sister have both garnered an interest in helping out at the garden as well.

The teen group meets every Thursday during the school year from 4-5:15 p.m. The group has room for around 10 more teens.

The best way to request to join the Green Teens program is by calling 341-4845 or emailing storybookgardenoffice@gmail.com.

The reporter can be reached at 583-2458 or chelsea.shannon@lee.net.