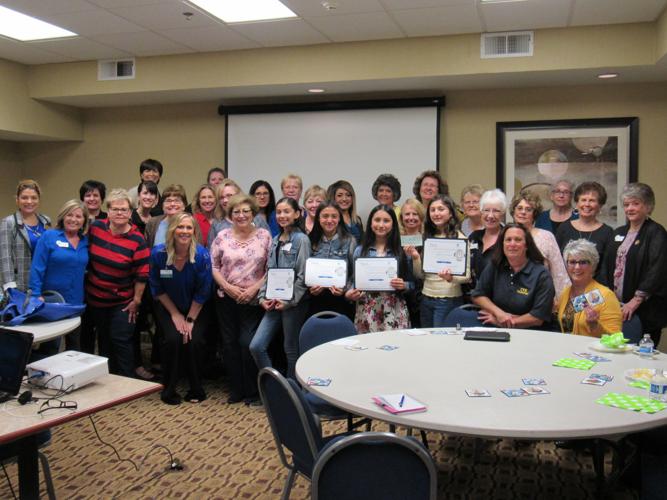 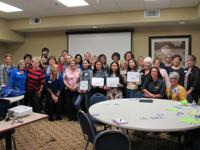 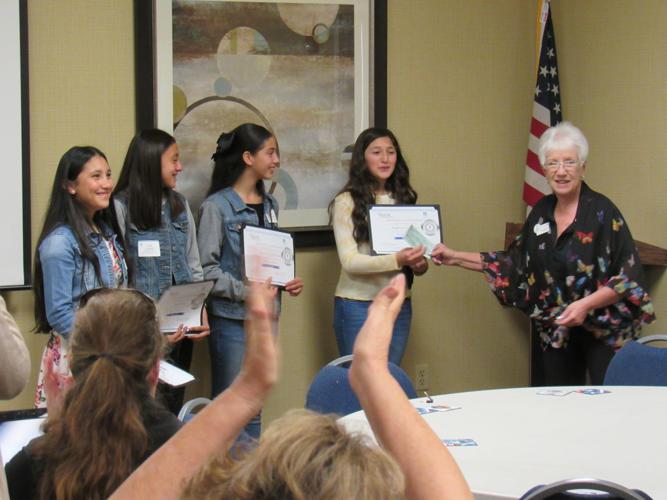 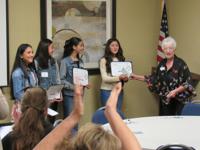 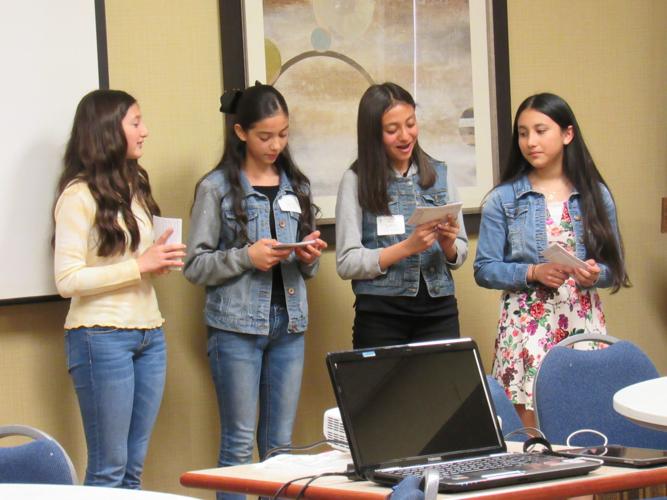 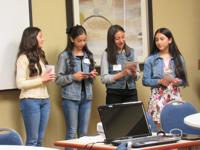 HANFORD — There were a few happy tears shed as members of Soroptimist International of Hanford presented a check to four John Muir Middle School students Tuesday afternoon as a way to show the students that they can achieve anything if they follow their dreams.

The money was given to help send the students to Washington, D.C., to present findings from their Mission 12 experiment on the International Space Station in the annual Student Spaceflight Experiments Program (SSEP) National Conference at the Smithsonian National Air and Space Museum.

The SSEP is about inspiring America's next generation of scientists and engineers by immersing and engaging students in every facet of real science.

All John Muir Middle School students competed against one another to design a proposal for an experiment that ran simultaneously in space by an astronaut at the International Space Station and on earth by the student designers.

Out of three finalists, program officials chose one final project from the school that made its way from the Kennedy Space Center in Florida to the international Space Station 250 miles above the surface of the earth.

The four girls designed science proposals, created hypotheses and ran experiments during Mission 12 to see if broccoli would germinate better in space than on Earth.

Now as seventh-graders, they will formally present their experiment designs and results to their peers at the annual SSEP Conference this summer.

“It’s huge — I can’t even begin to tell you what it means not just for Corcoran, but for the Central Valley,” said Judy Fierro, academic literacy coach at John Muir. “I couldn’t be more proud of our girls.”

Before they go, though, the girls got some practice presenting at the Soroptimist meeting on Tuesday.

Soroptimist International of Hanford is a volunteer women’s organization for businesses and professional women who work to improve the lives of women and girls through empowerment and education.

The girls talked about why they chose broccoli, the purpose of the experiment, the steps, materials, research, the results on earth and in space, and their overall conclusions and findings. They discovered the broccoli experiment from space grew better than on Earth.

The girls said they felt proud and excited at the conclusion of the experiment and hope their experiment adds to the idea of growth of food in space and more healthy food choices for astronauts.

Cheryle Boeve, current Soroptimist president, said the organization was very excited when they learned about the project and wanted to share with the girls the importance of following their dreams and having an education.

In an effort to encourage the girls to keep living their dreams and push through any obstacles, past president Maureen Larkin presented them with certificates of appreciation a check for $1,000.

Soroptimist members also contributed over $520 of out-of-pocket cash at the meeting for a total of over $1,520.

“That’s just the belief that we follow in our heart of education,” Boeve said.

Fierro and even a few of the girls became teary-eyed after being given the check and cash, which was a surprise they did not know was going to happen. Fierro said they were grateful and thankful for all of the support they have received.

“I can’t be more happy — it’s unbelievable,” Fierro said. “It’s going to make such in difference for our young ladies in getting them [to the conference].”

The total cost of sending the girls and chaperones to Washington, D.C. is around $8,000. With this money, they only have about $1,500 left to go.

“Thank you to everybody that helped us today and donated money,” Laisha said.

Fierro said the girls are breaking into a field that is predominately male, so she was thankful to have the support of the Soroptimist organization.

Tana Elizondo, past governor and current director of the Sierra Pacific region, said Soroptimist wanted to show the girls that someone believes in them and that they can propel to the next level.

“To see the sparkle in their eyes and their interest in science and education is phenomenal,” Elizondo said.

Assemblymember Rudy Salas invited the girls to Sacramento on Monday to present on the house floor of the State Capitol.

While the students said they are excited and a little nervous about their upcoming presentations, they said they hope to encourage other girls and spread confidence in girls who want to explore science.

To help the John Muir student scientists get to Washington, D.C., contact Principal Dave Whitmore at dwhitmore@corcoranunified.com or call the school at 992-8886.