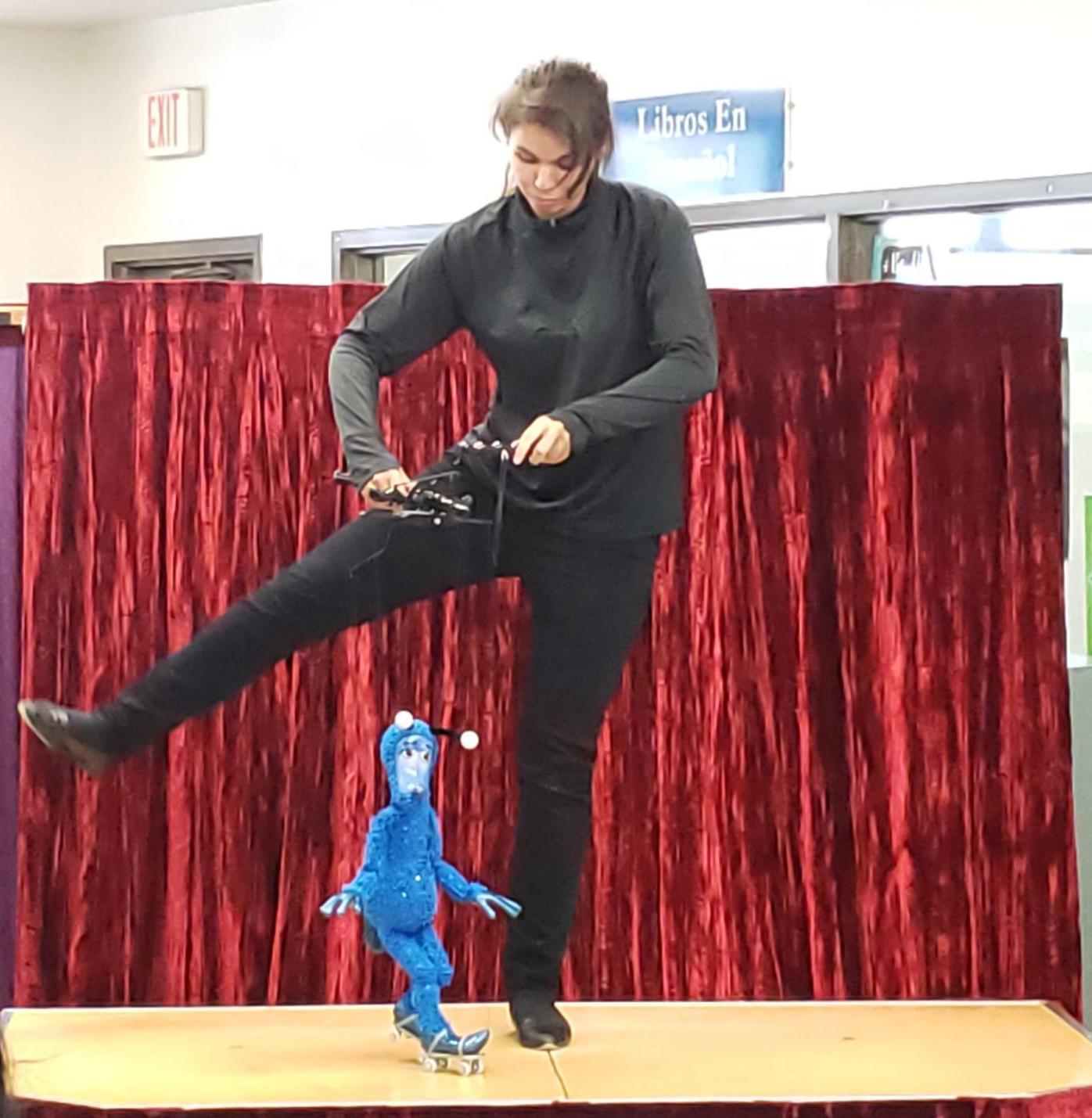 Puppeteer Samantha Lake performs with the Fratello Marionettes Monday at the Armona Library. 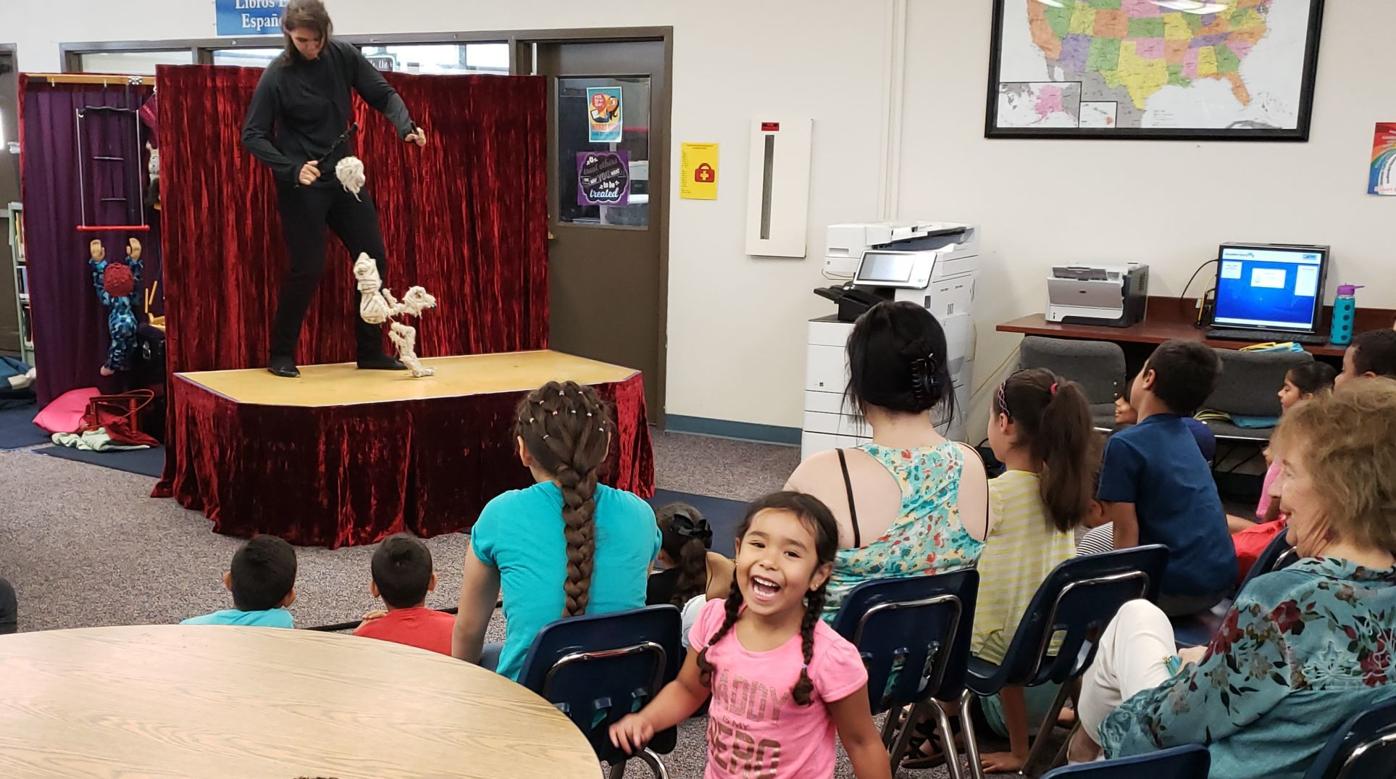 Daniela Gomez reacts to the Fratello Marionettes Monday in Armona. 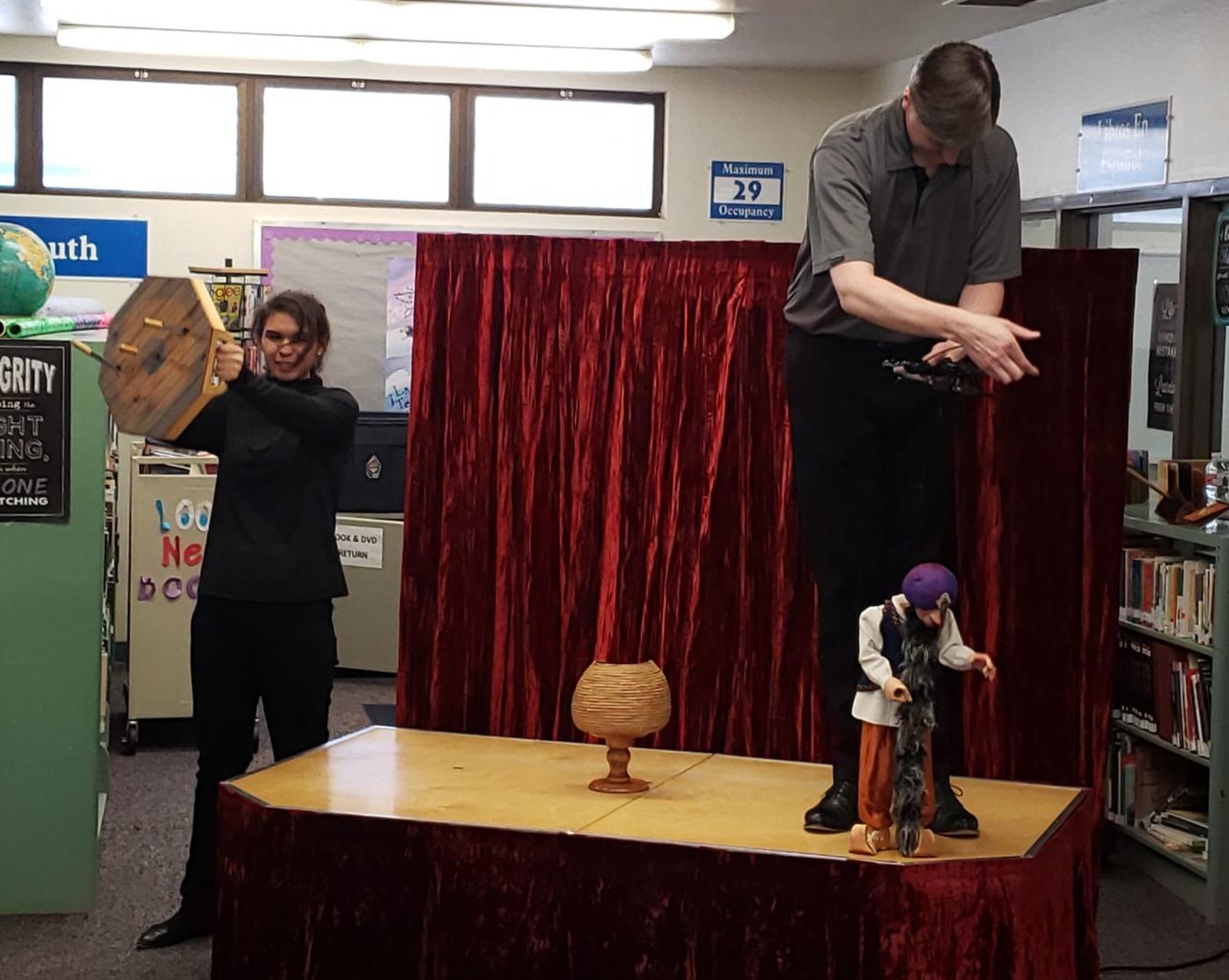 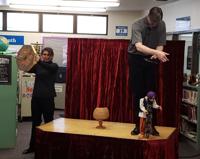 Samantha Lake, left, and Kevin Menegus perform with the Fratello Marionettes Monday at the Armona Library.

Puppeteer Samantha Lake performs with the Fratello Marionettes Monday at the Armona Library.

Daniela Gomez reacts to the Fratello Marionettes Monday in Armona.

Samantha Lake, left, and Kevin Menegus perform with the Fratello Marionettes Monday at the Armona Library.

ARMONA — The Fratello Marionettes felt so alive Monday afternoon that, after the show, children weren’t waving and saying “bye” to the puppeteers, but to the puppets themselves.

After the performance of “Vaudeville Follies” at the Armona Library, children lined up to take photos with the various puppets. Some said “goodbye” and some said “thank you” — to the puppets.

Puppeteer Kevin Menegus said that the children in the audience respond to the way the puppet characters interact to the music accompanying them and that particular movements can cause quite a reaction from the audience. For example, during the show, an opera-singing puppet experiences a moment of embarrassment during a solo, eliciting big laughs from the crowd.

“The kids tend to remember particular tricks the characters do and really respond to them,” Menegus said.

The “Vaudeville Follies” is one of the shows the Bay Area-based Fratello Marionettes perform when touring.

“It includes a handful of acts that are popular with audiences like the knife-throwing act, the dogs and trapeze artists, and a few surprises,” he said.

The library filled with “oohs” and “aahs” Monday as “The Great Cutlerini” performed his knife-throwing act.

The Fratello Marionettes will continue performing throughout Kings County this week, with stops in Lemoore and Hanford, among other libraries in the county.

The show is good for many age groups and is one of the company’s most popular, Menegus said. Other shows in regular rotation include “Aladdin,” “Peter & the Wolf,” “The Frog Prince” and a brand-new Halloween-inspired “Spooktacular” that involves witches and Frankenstein’s monster.

The company features two performers: Menegus and Samantha Lake, both  who serve as puppeteers and performers in addition to designing and creating the puppets themselves.

“It’s great to be sculpting and carving, painting and costuming and working on those really fun small details of the characters,” Menegus said.

Each puppet takes two to three months to create, he said.

After the show, Menegus and Lake answered questions from the crowd and even explained how a few of the on-stage tricks worked. The knife-throwing “Great Cutlerini” act took about a year to perfect, Menegus said.

Other acts throughout the show included a duck performing “Swan Lake” and a mime experiencing the ups and downs of balloon ownership.

Menegus, who’s been doing puppet shows since he was 6 years old, said that his puppet shows are more theatrical and not as “cartoony” as others. He takes more inspiration from the ballet and classical music than he does from Tex Avery, a well-known cartoonist.

He says marionettes are more difficult to puppet than other types of puppets, due to the lack of control the puppeteer has over the character, and that’s one of the main reasons he’s enjoyed working with them since the late ‘80s.

The Fratello Marionettes will perform free shows through the Kings County Library system throughout the week.

Today: 11 a.m. at the Avenal Library and 2 p.m. at the Kettleman City Library.

Wednesday: 11 a.m. at the Lemoore Civic Auditorium and 2 p.m. at the Stratford Library.

Thursday: 10 a.m. at the Hanford Civic Auditorium and 1 p.m. at the Corcoran Library.