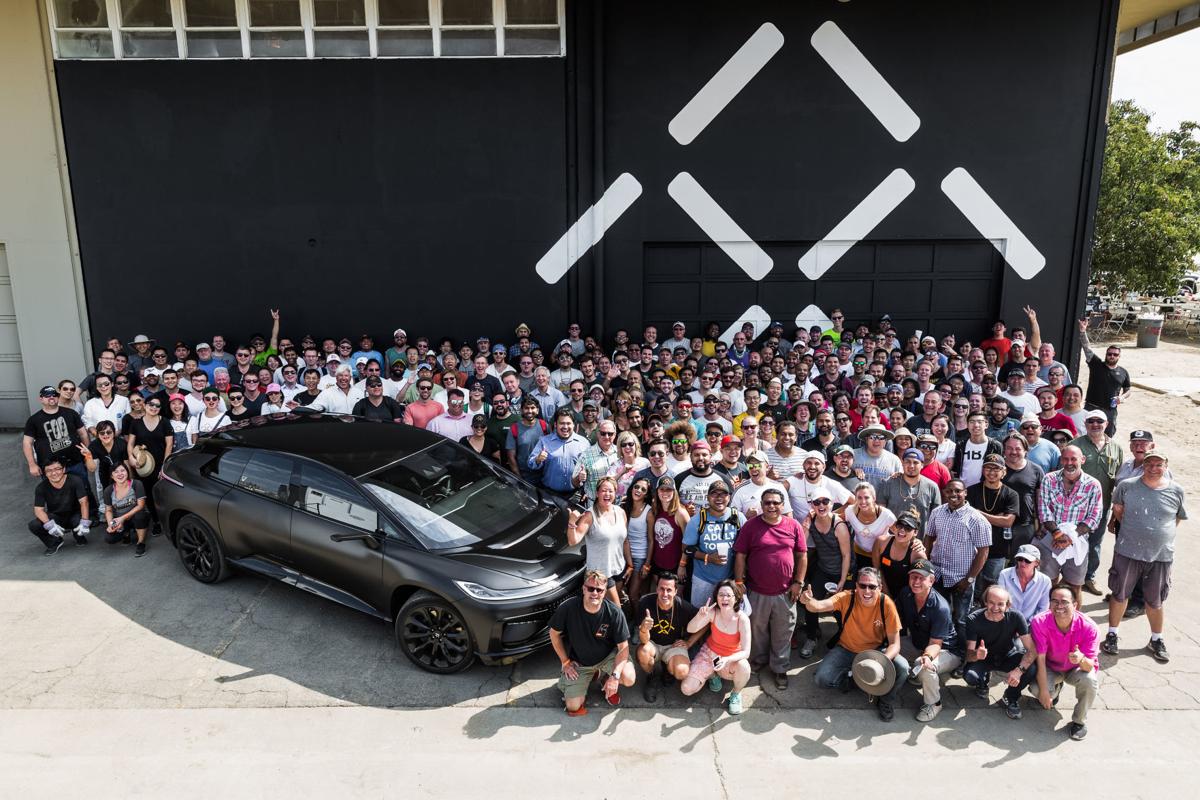 Electric car company Faraday Future hosted a clean-up event in Hanford on Aug. 5 after signing a lease on the old Pirelli tire plant to make it a manufacturing facility. The company's employees and local Hanford and Kings County officials attended the event.

A rendering of the planned Faraday Future electric car manufacturing facility in Hanford. It will be located in the old Pirelli tire plant.

Electric car company Faraday Future hosted a clean-up event in Hanford on Aug. 5 after signing a lease on the old Pirelli tire plant to make it a manufacturing facility. The company's employees and local Hanford and Kings County officials attended the event.

A rendering of the planned Faraday Future electric car manufacturing facility in Hanford. It will be located in the old Pirelli tire plant.

HANFORD — The atmosphere was one of excitement when electric car company Faraday Future announced plans last month to locate its new manufacturing facility in the old Pirelli tire plant in Hanford’s Industrial Park, but nary a word has been uttered publically since the company hosted a clean-up event at the facility on Aug. 5.

“Regarding progress in Hanford, we are in consistent communication with City officials regarding the project,” a Faraday Future spokesman said in an email Tuesday. “We’ve received a very warm welcome from the community and its officials, and are excited to finalize the site for equipment move-in.”

Faraday Future signed a lease in August on the facility and immediately hosted a clean-up event to prepare the 1 million square-foot site for the move-in of manufacturing equipment.

According to the company, hundreds of its employees voluntarily drove from Los Angeles to Hanford on Aug. 5 to help clean up the building. City of Hanford and Kings County officials like Ayers, Hanford City Manager Darrel Pyle, Vice mayor Sue Sorensen, Councilman Francisco Ramirez and Supervisor Craig Pedersen were also at the clean-up event.

Sorensen said she was amazed by how many employees took time out of their weekend to drive to Hanford and help clean up the facility.

“Everybody seemed very energetic, positive and ready to come to Hanford,” Sorensen said.

In a released statement, Faraday Future said it wanted a turn-key facility that offers a faster path to production, and picked the site in Hanford because it is strategically located between the country’s two largest electronic vehicle markets: Los Angeles and Silicon Valley.

The facility is supposed to be used to manufacture the company’s first electronic vehicle, the FF 91, and bring it to market by the end of 2018. Faraday Future said it expects to employ up to 1,300 workers, over three shifts, over time.

The company hasn’t been without troubles; in June it dropped out of building a $1 billion, 3-million square-foot facility in Las Vegas amid financial issues.

Pyle said the city has a meeting with the company’s officials later this week, and will know more about the progress of the Hanford facility then.

“Right now, all I know is they are designing the inside of the facility,” Pyle said.

“Following our clean-up event on Aug. 5, [Faraday Future] has continued the process of site preparations, including planning, refurbishment, and permitting. These efforts are ongoing,” the company spokesman said. “Similarly, following the move-out of current tenants in late November, we expect to ramp-up on site in early 2018.”

After talking with the CFO and other employees of the company at the clean-up event, Ayers said he found them to be a “bright, capable group of people.”

“I’m excited that they’ve chosen to come to Hanford,” Ayers said, adding he hopes the company is successful and creates additional jobs in the county.

Sorensen said she believed people who work for the company are focused on their business plan and intend to move forward with coming and staying in Hanford for the long-term.

“I hope it works out for them,” Sorensen said. “It’s a great opportunity to have a company like that in Hanford that brings jobs and growth. A healthy company is always a positive for Hanford.”

HANFORD — Faraday Future, a Los Angeles-based electric car company, is set to open a manufacturing facility in Hanford that is expected to bri…