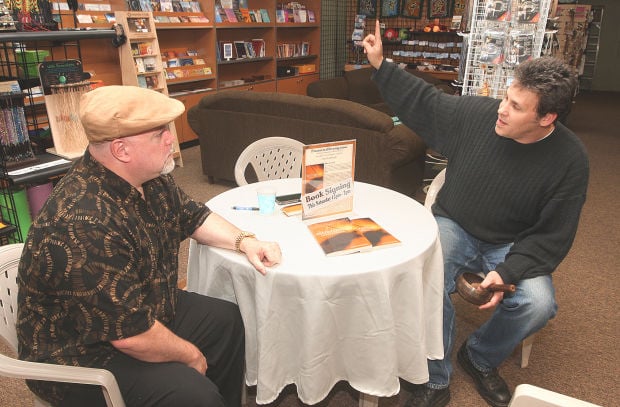 Joe Neuhardt, right, of the Carnegie Museum talks to author Chad Stambaugh about some of the haunted places in Hanford during the signing at Cosmic Corral in Hanford on Saturday afternoon. (Gary Feinstein/The Sentinel) 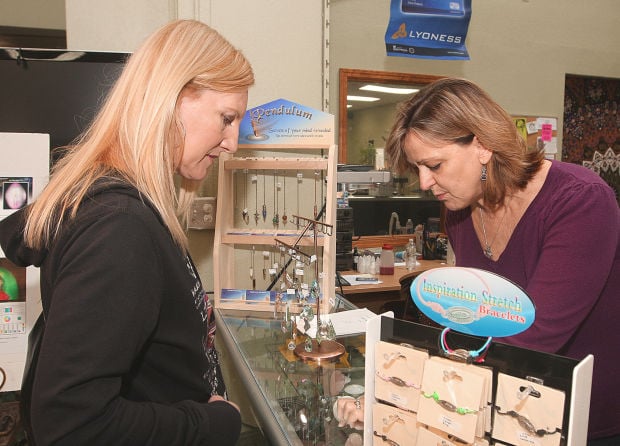 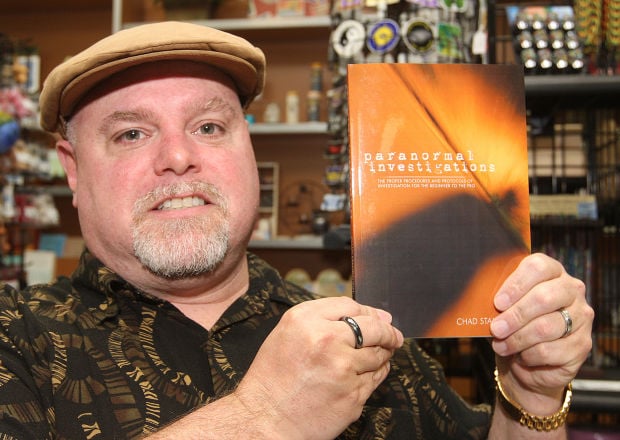 Author Chad Stambaugh holds up his new book, "Paranormal Investigations", which he was signing at Cosmic Corral in Hanford on Saturday afternoon. (Gary Feinstein/The Sentinel)

HANFORD — A measuring cup inexplicably flies through the air. A recliner moves back and forth on its own accord. A scene from a scary movie? No. This is Chad Stambaugh’s life.

Stambaugh is a paranormal investigator who, with his wife, Chrissy Campbell, founded the 11th Hour Paranormal Research Society in Fresno, through which they are hired to investigate possible paranormal phenomena. Recently, Stambaugh came out with his first self-published book — “Paranormal Investigations: The Proper Procedures and Protocols of Investigation for the Beginner to the Pro.” Stambaugh held his first book signing at the Cosmic Corral on Saturday.

“It’s really nerve-wracking and exciting at the same time,” Stambaugh said. “I like being able to talk to people about my book and the paranormal.”

This was also the first book signing ever held at the store, according to co-owner Joy McGuire.

“I don’t know a lot about paranormal activity, but it seems like he does,” said McGuire said. “There seems to be a lot of interest in it.”

For the past six months, Stambaugh has worked on his book, which he said will provide an overview on the equipment and procedures that are necessary for doing an investigation.

“There’s really no book out there that’s teaching anyone how to do it right,” he said. “A lot of people are getting tips by watching paranormal TV shows, but most of these shows are for entertainment purposes only and don’t show the proper way of doing things. Some of the things they show are ridiculous and dangerous.”

“I hope that it will help get the book out there to people who want to become investigators or to people just interested in how it’s done,” he said.

Stambaugh’s introduction to the paranormal began in 2008 at his wife’s home, where he claims the incident with the measuring cup and the recliner occurred. As more strange occurrences continued at the house, Stambaugh said his wife did some research and learned that her grandmother had died in the house 15 years previously and that the activity they experienced may have been her attempting to communicate with them.

“I used to be a skeptic, but this experience has made me a believer,” he said.

These initial experiences sparked an interest and passion in Stambaugh for everything paranormal. Stambaugh said one of the most exciting jobs he’s done was when he and his wife were investigating a private residence in Fresno. The couple that lived there complained of spirits in the house.

“When we got there, they were really upset,” he said. “They were on the verge of selling their house.”

Stambaugh said he put up video surveillance in the house and, after reviewing the footage, said there were people-shaped shadows, what he calls “shadow people,” visibly moving in the house. He also said that by using special voice-recording technology, he was able to pick up a few ghostly voices pleading them not to let the owners sell the house.

“After doing some digging, we found out that a family had died in a fire at the house in the 1800s,” he said.

After discovering this, Stambaugh said he and his wife set up a seance through which the owners could speak with the spirits. Through this, they formed an agreement in which the couple would let the spirits stay if the spirits would stop disturbing them.

Stambaugh said he has yet to do a job in Kings County, although he said he would like to visit the Bastille in downtown Hanford sometime.

“I’ve been trying to get into the Bastille for the past two years, but I’ve been having a difficult time getting city approval,” he said.

Stambaugh was also invited to be part of a series of events related to the paranormal that the Hanford Carnegie Museum is planning in October.

Stambaugh is currently in the process of writing his second book, which will be like a dictionary that will have words and definitions that are frequently used in the paranormal field. He is also planning to write a novel about an investigator who is sent to inquire into a paranormal event. He expects this to be published late next year.

Stambaugh’s book is available for purchase online through his website, www.paranormalinvestigations.info, as well as on Amazon.com. The book can be purchased in hardcover and paperback editions and is also available as an e-book.

The reporter can be reached at 583-2429 or by email at jluiz@hanfordsentinel.com.

Chad Stambaugh’s book, “Paranormal Investigations,” is available for purchase online through his website, www.paranormalinvestigations.info, as well as on Amazon. The book can be purchased in hardcover and paperback editions. It is also available as an e-book.

Only in Kings County: Planning for the next normal

Joe Neuhardt, right, of the Carnegie Museum talks to author Chad Stambaugh about some of the haunted places in Hanford during the signing at Cosmic Corral in Hanford on Saturday afternoon. (Gary Feinstein/The Sentinel)

Author Chad Stambaugh holds up his new book, "Paranormal Investigations", which he was signing at Cosmic Corral in Hanford on Saturday afternoon. (Gary Feinstein/The Sentinel)