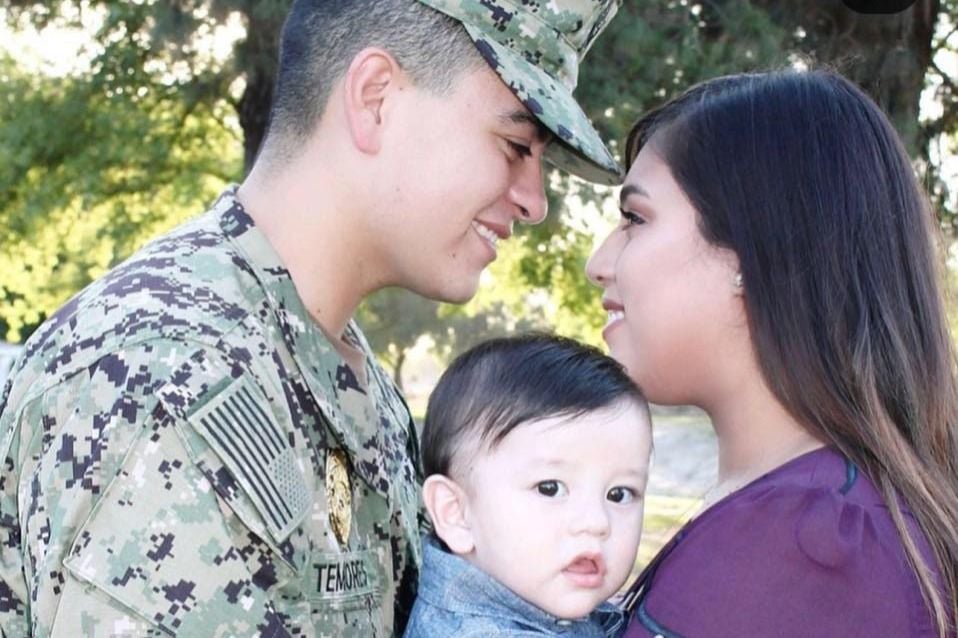 Oscar Temores poses for a photo with wife Bethany and son Damien in this photo posted on the GoFundMe account in support of the family. 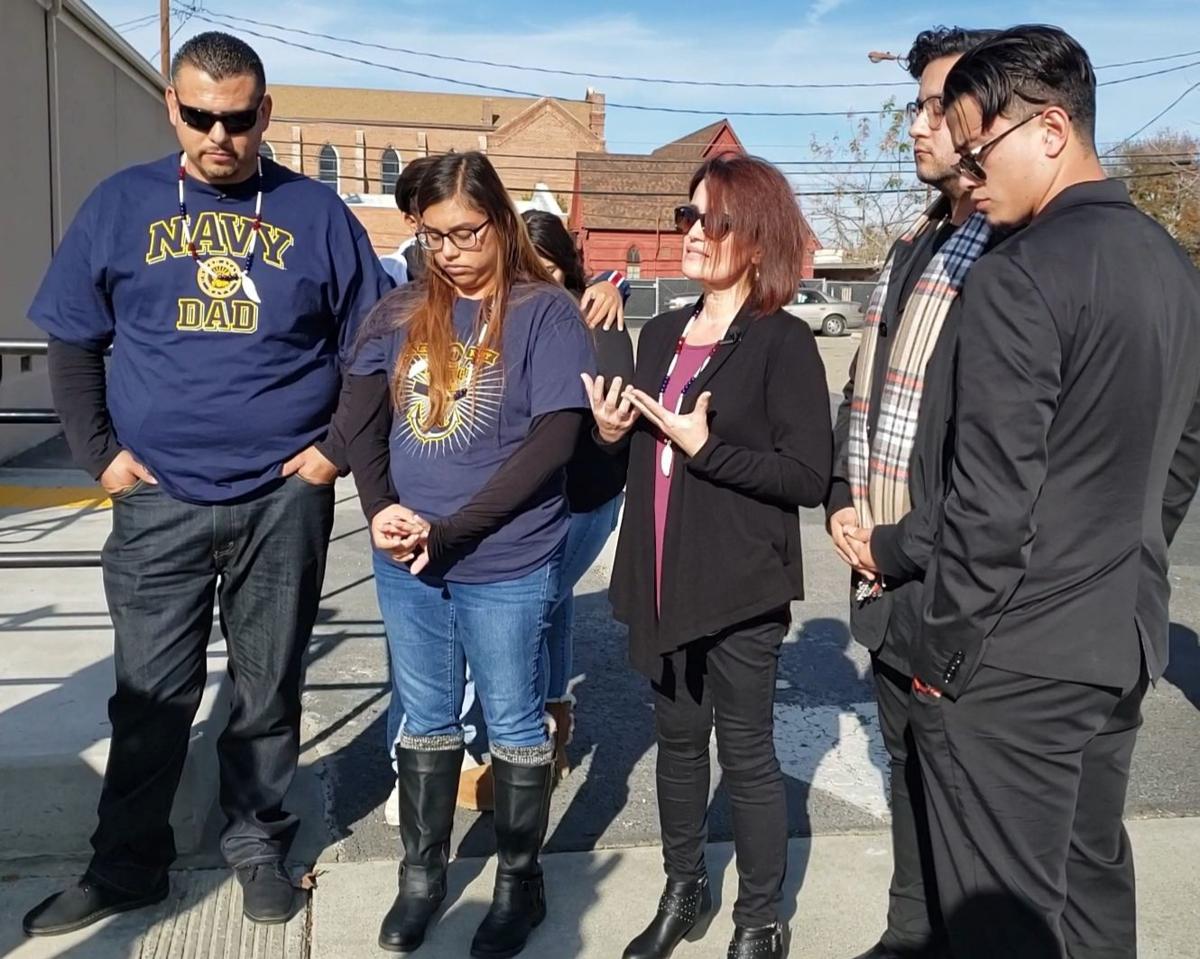 The family of Oscar Temores speaks to the press outside of the People's Funeral Chapel in Hanford Thursday after the 23-year-old sailor's body was  escorted home to the Central Valley.

These are some of the words that Oscar Temores’ family used to describe him Thursday after the 23-year-old sailor’s body was escorted home to the Central Valley. The master-at-arms was killed late last month after sustaining injuries in a crash while responding to reports of a gate runner at Fort Story in Virginia.

“How do I want my son to be remembered? As a hero,” Temores’ mother Celina Martinez said Thursday. “My son was just someone you’d just always want to be around. His smile — when he walked into the room — the first thing you’d notice was his smile. He was that person you’d want to be around. He had that charisma. You were drawn to him.”

Charismatic and good-humored is how older brother, Ricky, recalled Oscar Thursday while speaking to the Sentinel.

“He could make you laugh even if you were in tears,” Ricky said, adding that Oscar had a talent for making people laugh until their ribs hurt.

Fond of fishing trips and a firearms hobbyist, Oscar was also very forgiving — sometimes to a fault, his brother said.

“You could piss him off to the world’s end, but he always knew how to forgive,” Ricky said. “He took every day as a blessing, so [a grudge] was not something he would hold on to for too long.”

Ricky described his brother as a playful child and the type that would socialize with random children on the playground — a trait that he kept throughout his teen years and into adulthood.

Inspired by jets that would occasionally fly over the family home, a young Oscar vowed to join the armed forces as an adult. Waiting until after marriage, he enlisted in the Navy about a year ago.

“It was so strange because when he came back from boot camp, all of us were like, ‘whoa — there’s a new Oscar.’ He went from jokester — trying to fill his days with as many antics as he possibly could — to a very meticulous, organized young man. It made him structured, it made him a lot more eloquent in terms of the way that he spoke. He came back to us as a new Oscar. It was a matured version of him,” Ricky said.

Ricky credits the Navy with honing Oscar’s natural inclination toward filling the role of protector for the close-knit family while still nurturing the side of him that was playful and light-hearted.

“He was always joking around. He was never serious,” Martinez said.

The two sides of Oscar — the jokester and the protector — gelled perfectly, Ricky said.

“As far as the military lifestyle with Oscar’s personality goes, he found a way to harmonize the two and still be true to who he was while serving his country,” Ricky said.

In death, the sociable Oscar still brings people together. Oscar’s family thanked the community for their support, both emotionally and financially. A GoFundMe account organized by Ricky has exceeded its $17,500 to assist with burial and transportation expenses, among other issues. The page was also shared nearly 8,000 times on social media.

“The community has come together with us and is helping us with their support and their thoughts and prayers,” she said. “We’ve gotten so many cards in the mail. Not just locally, but from out of state, everywhere. I’m just overwhelmed.”

Perhaps more than hero, jokester or protector, Oscar will be remembered as a father and husband.

“The most important thing to him was his wife and his son,” Martinez said.

A funeral mass was held on Dec. 7 at St. Peter Prince of the Apostles Catholic Church in Lemoore, followed by burial with U.S. Navy Military Funeral Honors at Lemoore Cemetery, 9660 18th Ave., Lemoore.

LEMOORE — A man and woman were arrested on suspicion of child endangerment, among other charges, after investigators found evidence of drugs f…

LEMOORE — After receiving a certificate of competency from a state hospital, former Lemoore city councilmember Holly Blair will now be able to…

LEMOORE — Kings County Sheriff’s Office arrested a man for evading law enforcement, among other charges, after he led deputies on a chase in a…

Oscar Temores poses for a photo with wife Bethany and son Damien in this photo posted on the GoFundMe account in support of the family.

The family of Oscar Temores speaks to the press outside of the People's Funeral Chapel in Hanford Thursday after the 23-year-old sailor's body was  escorted home to the Central Valley.