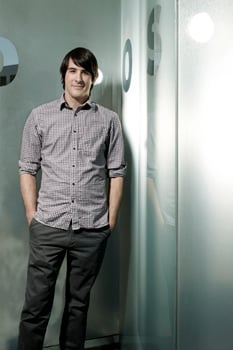 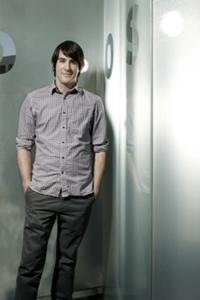 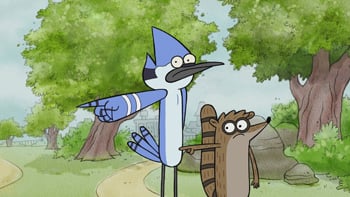 A scene from "The Regular Show." (Photo courtesy of the Cartoon Network) 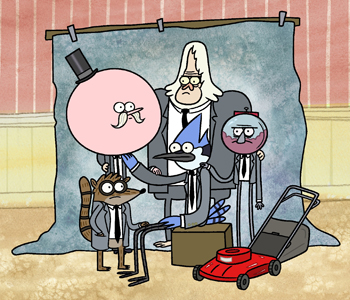 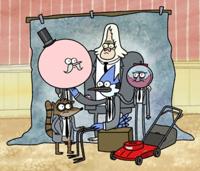 A scene from "The Regular Show." (Photo courtesy of the Cartoon Network)

Work is not “work” for J.G. Quintel. He says every day he’s excited to get to his job and get started for the day.

“I love what I do and I am grateful for that,” Quintel said. “I am living my dream and hope to continue doing so. I would hate for this to ever feel like a ‘job.’”

James Garland “J.G.” Quintel, who grew up in Hanford, now lives in Burbank and is the creator of the hit animated series “Regular Show” on Cartoon Network.

“Regular Show” follows the misadventures of two 23-year-old friends, a blue jay named Mordecai and a raccoon named Rigby. Both are employed as groundskeepers at a park and spend their days trying to slack off and entertain themselves by any means. Quintel is the writer and director of the show and is the voice of Mordecai.

Last year, his work on the show was nominated for a Primetime Emmy Award in the category for “outstanding short-format animated program.” The show is in its fourth season.

“The whole Emmy thing was a very surreal experience,” he said. “I had been there before for shows that I was a part of, but that was the first time being there for myself, for something that I personally had done. It was so cool. It felt great.”

Quintel, 29, also was the creative director for “The Marvelous Misadventures of Flapjack,” an animated series that appeared on television from June 2008 to August 2010. In December 2009, he was nominated for an Annie Award for his directing work on an episode of that show.

“I have always had a love for everything animation,” he said. “I have been interested in it for as long as I can remember. I used to watch cartoons on TV, and I just knew that that was what I wanted to do in life.”

As a kid, Quintel loved drawing and watching cartoons such as “The Simpsons,” “Beavis and Butthead” and “Ren and Stimpy.” He often played the video game “Toejam and Earl,” which he said was a major influence for the characters of “Regular Show.”

Quintel’s mother, Terri Quintel, said her son has always wanted this career ever since he was very young.

“It always amazed me how soon he knew what he wanted to be when he grew up,” she said. “I remember when he was like 6 or 7 years old and people would ask him what he wanted to do, and he would always say, ‘I want to make cartoons.’ He’s been dreaming of this his whole life.”

Quintel said his family has been very supportive throughout his career, which has made achieving his dream so much easier. He said he remembers when he was a 16-year-old sophomore at Hanford High School and his father gave him a video camera.

“It was one of the coolest things he ever gave me, and it really helped inspire me,” he said. “I remember my younger brother and I would use Lego men and crude paper cutouts to create several short film projects. It was all for school; other kids were making dioramas, presentation boards and writing papers — I always made a short movie and showed it in class instead.”

After high school, he went to a summer program at the California Institute of the Arts, also known as “CalArts,” a private university in Valencia established in 1961 by Walt and Roy Disney to offer bachelor’s and master’s degrees in various forms of visual arts. He later was accepted and attended classes there.

“It was during this time that things got a little rough for me,” he said. “After the summer program there at CalArts, I wasn’t accepted right away to attend there in the fall. It just depressed me a bit, because I had fallen in love with that school and knew that was where I needed to be. I had to come back home and attend a junior college for a while. But I kept trying and eventually got in.”

His studies at CalArts eventually lead to an internship at Cartoon Network to work on the TV series “Star Wars: Clone Wars.”

“From then on, I just worked my way around,” he said. “I worked on various different shows like ‘Camp Lazlo,’ and then eventually got to the point where I could pitch my idea for ‘Regular Show.’ The rest is history.”

Quintel is now married and hard at work developing new episodes of his series. He said he hasn’t decided yet if he wants to move on and make a feature film.

“I mean I might do it, if the right project came along, but I really love working in television,” he said. “I love the demands and constant creativity involved with it. Plus, I’m not ready to leave Mordecai and Rigby behind just yet; I love those characters. I’ve got a lot more ideas for ‘Regular Show’ that I still want to do.”

His mother said she doesn’t care what he does, as long as he’s happy, she said.

“I am so proud of him,” she said. “He has worked so hard. He’s done this all on his own. He’s proof you can achieve your dreams if you really stay motivated and driven.”

Congratulations to a talented young man and his supportive mother!

Man my kids love that show. They have my home DVR set to record every episode and imitate the characters all day long. They are going to flip out to find out the creator use to live in Hanford.I hope he comes back to visit. Maybe my kids can get his autograph.