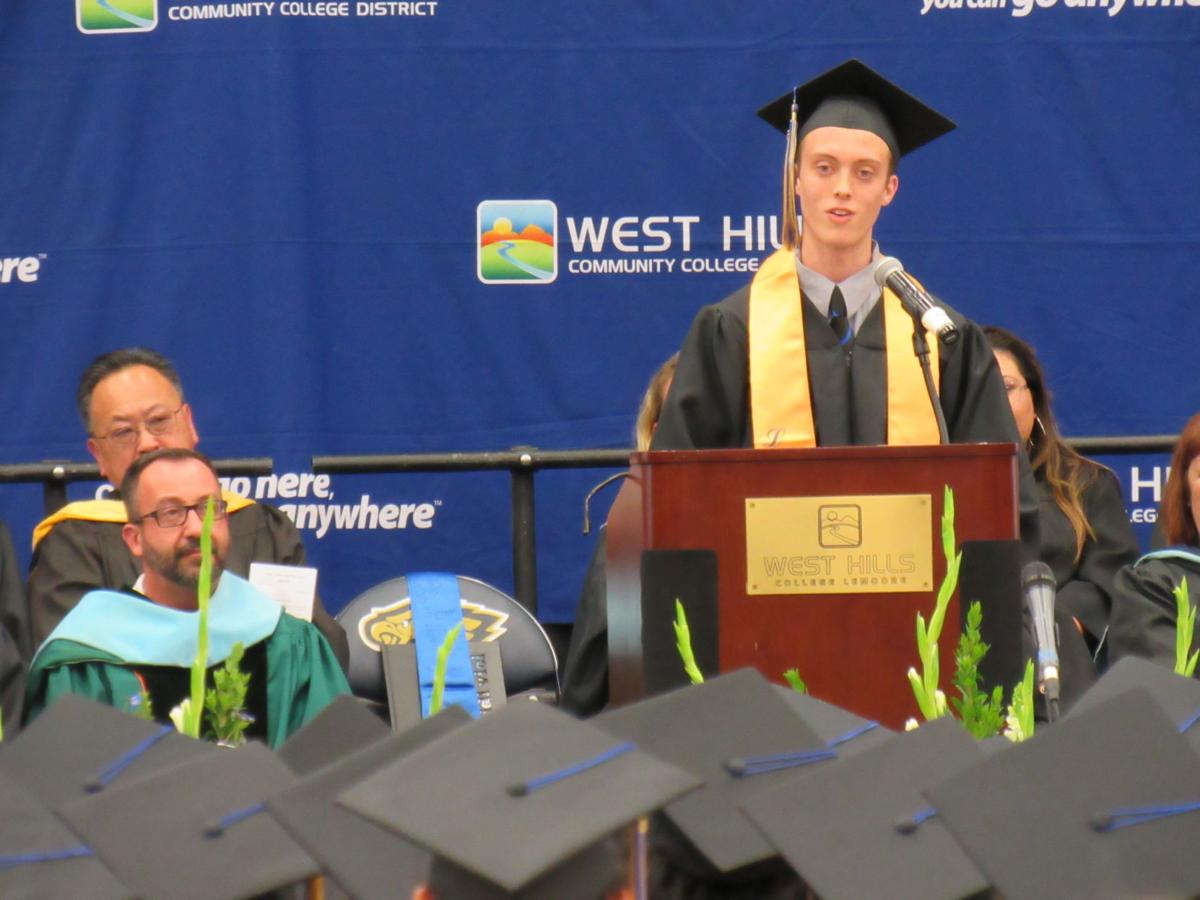 Nikolas Valentino was the recipient of the Lemoore Middle College High School “Panther Award" and gave a speech Friday during the graduation ceremony. 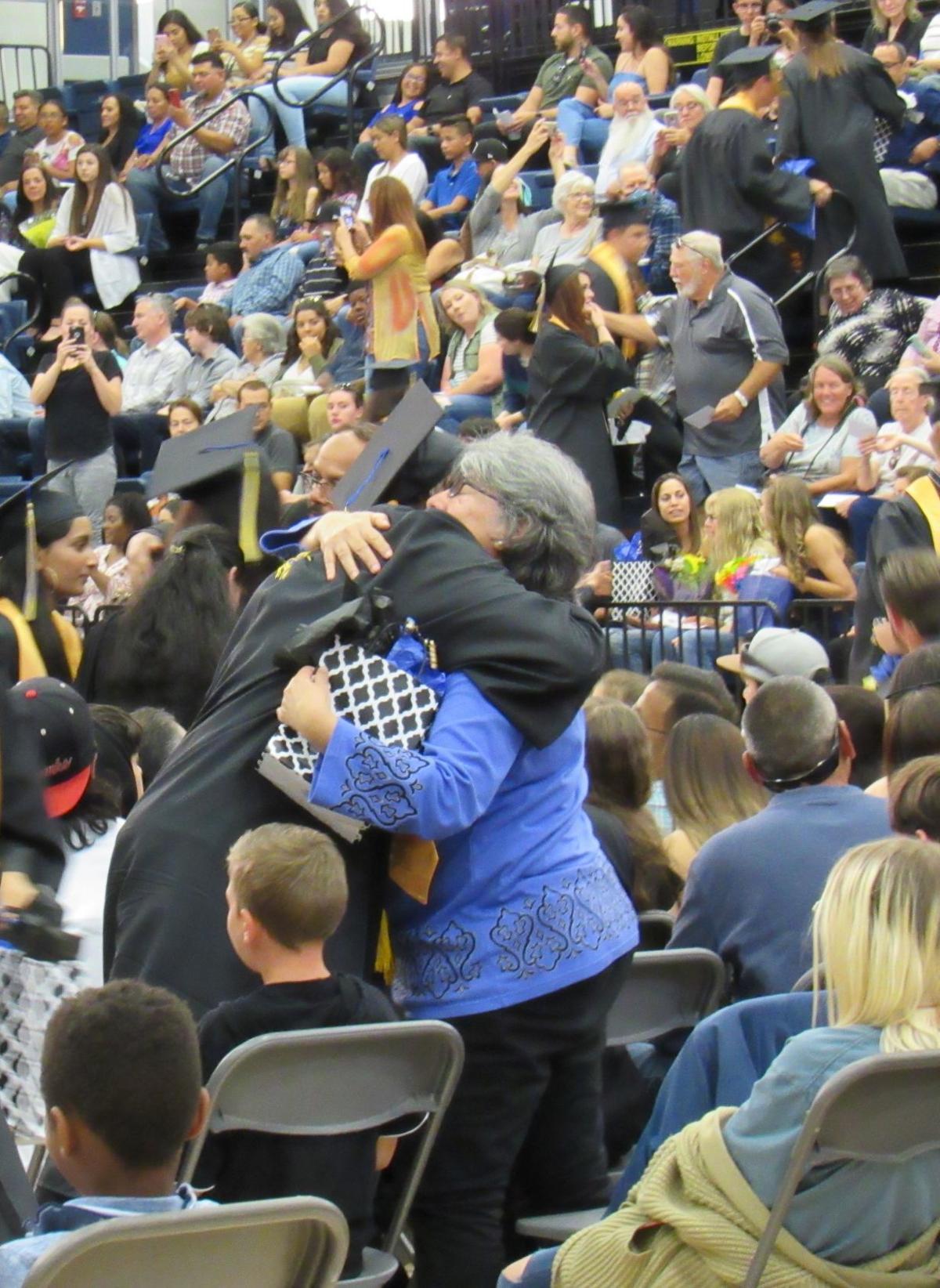 A Lemoore Middle College High School student presents his “token of thanks,” Friday at the school's graduation ceremony. 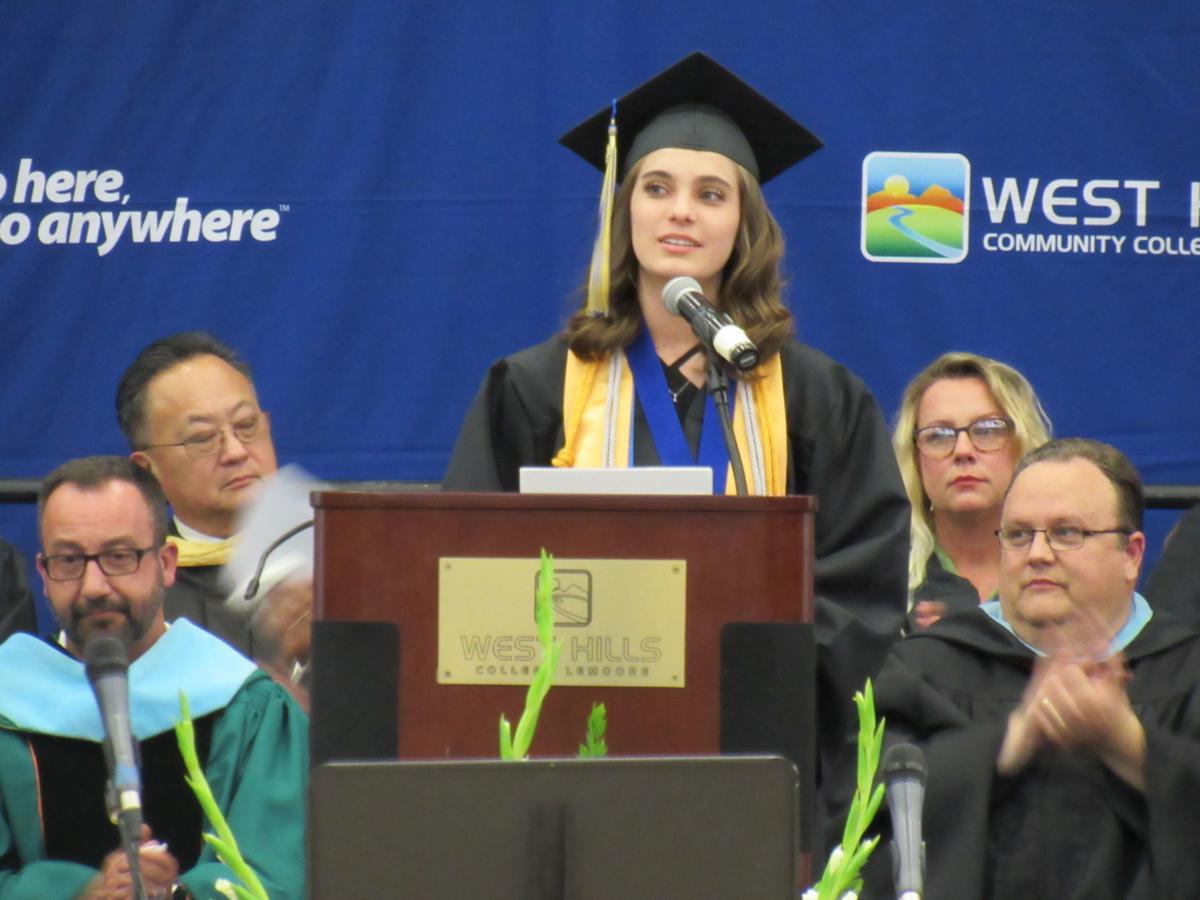 LEMOORE — What does it mean to be distinguished?

“Being distinguished means accomplishing something that sets you apart from others,” Chuck Gent, principal of Lemoore Middle College High School, said Friday during the school’s graduation ceremony.

The 59 graduating seniors of LMCHS and a handful of students from Lemoore Online College Preparatory High School had their hard work, dedication and academic performance recognized during the ceremony.

Of the graduating classes, 16 of those students also received their associate’s degrees from West Hills Community College. Another 37 students earned over 20 college units. They did this by taking courses outside of regular school hours or online.

Valedictorian Mackenzie Jeffery reflected on the students’ journeys from freshmen to seniors.

“I have so many fond memories of my time in high school and I will cherish these forever,” she said.

While at LMCHS, Jeffrey said they learned many lessons, and not just what could be memorized in a classroom. She said they have become completely different people who are more prepared to face obstacles that come their way.

She thanked the families for their support and the teachers and faculty for everything they taught the students about school and life.

“We didn’t just grow as students, we grew as people,” Jeffrey said, adding she was thankful to know them all.

While they are all unique and had different experiences in life, Jeffrey said the students will always be connected through their shared high school experience and the memories they will continue to treasure.

For the past nine years, the school’s staff has presented an award to a graduating student who they feel is an “embodiment of the school and culture,” said Gent. He said staff always strives to create an environment of collaboration, caring, compassion, individual determination and success.

The award became known as the “Panther Award,” and Gent said staff puts their own money together towards a $250 scholarship for the winning student. This year, Nikolas Valentino received the award.

While Valentino did not start out as a high achiever, his story is one of success that led to being a part of a national championship academic decathlon team, winning medals at the local, state and national level.

Valentino admitted that high school started out rough for him, but by the end of his freshman year he felt like LMCHS was home and the best place for him.

He said his greatest achievements are being part of the Academic Decathlon Team and Lemoore Police Explorer program.

“What we have accomplished is only the beginning,” he said. “Each and every one of you is capable of greatness.”

“This group of graduating seniors will leave Middle College and Lemoore Online better schools than when they enrolled,” said Gent, who finished by urging them to be distinguished in all aspects of whatever they do in the future.

Nikolas Valentino was the recipient of the Lemoore Middle College High School “Panther Award" and gave a speech Friday during the graduation ceremony.

A Lemoore Middle College High School student presents his “token of thanks,” Friday at the school's graduation ceremony.