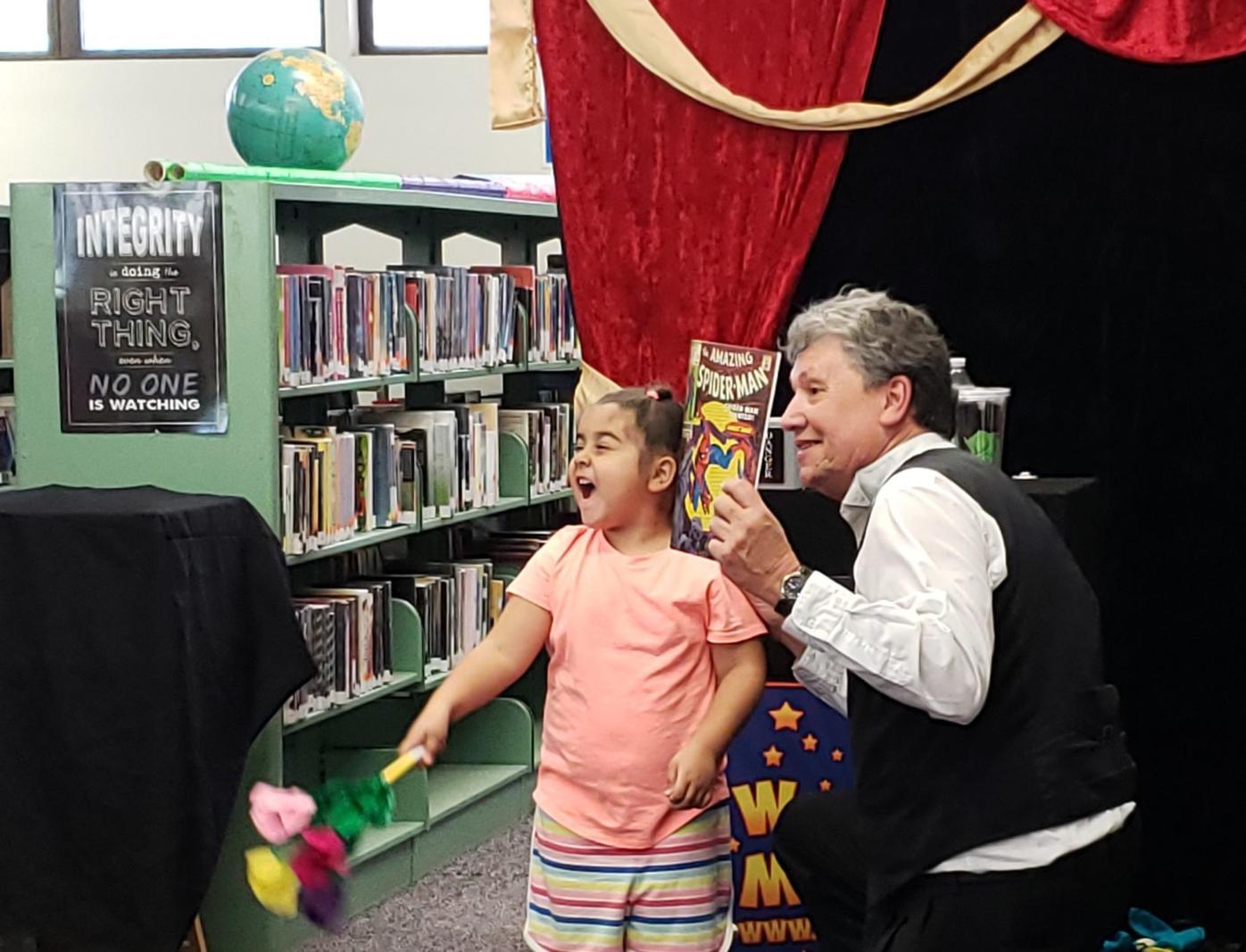 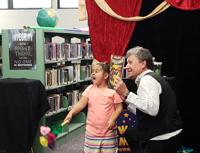 Winston the Magician, left, performs a trick with a volunteer Monday at the Armona library. 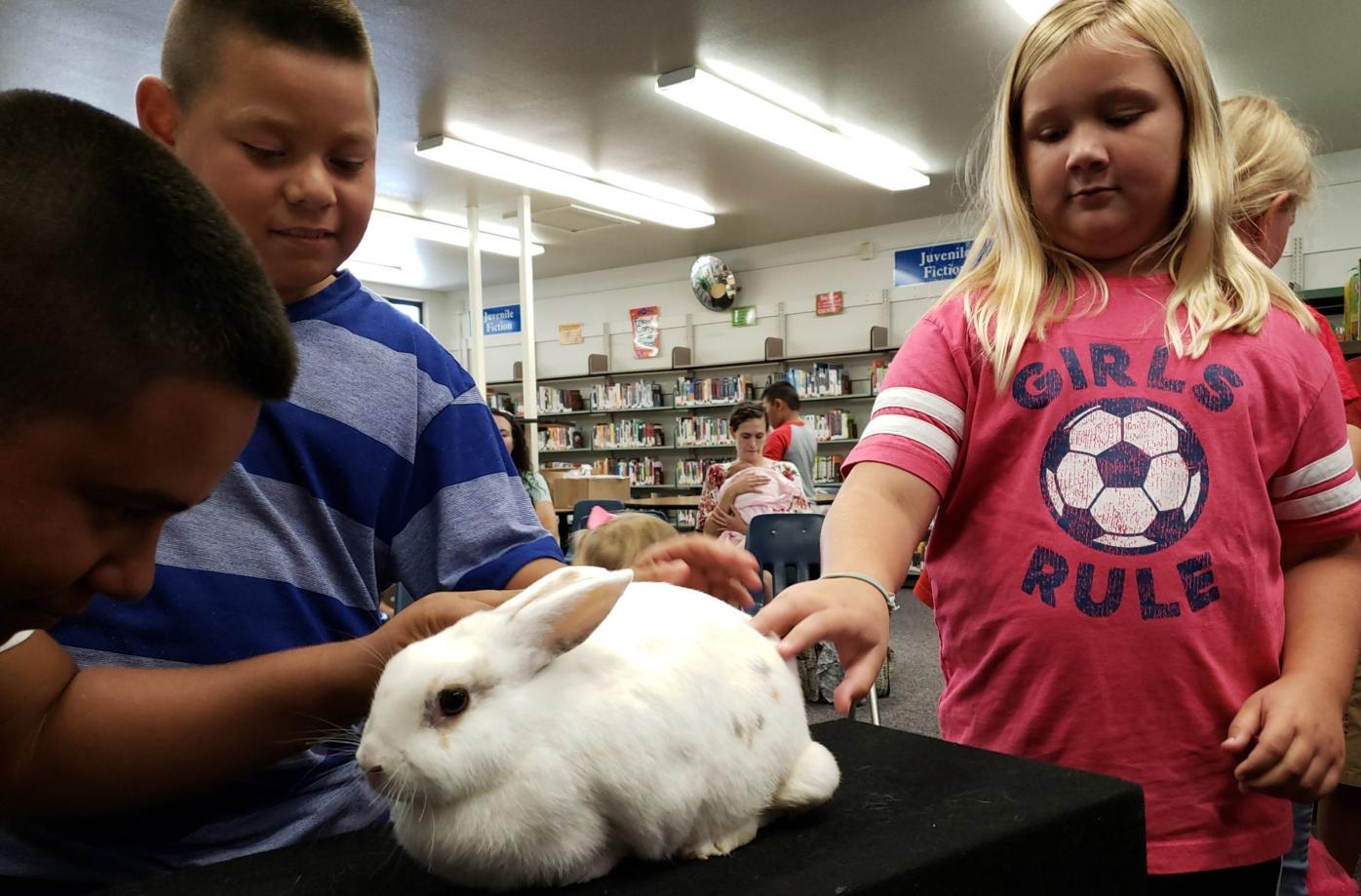 Children meet with Gizmo after a performance by Winston the Magician at the Armona library Monday.

Winston the Magician, left, performs a trick with a volunteer Monday at the Armona library.

Children meet with Gizmo after a performance by Winston the Magician at the Armona library Monday.

HANFORD — The magic word at Kings County libraries this week is “reading” – literally.

Winston the Magician — also known as Lance Boyce when not he’s off the clock and wandless — will bring his family-friendly interactive magic show to local libraries this week.

“It’s a fun, silly show. Even the kids that don’t get to come up [and assist in tricks] still get to be involved in saying the magic words or waving their hands — that kind of stuff,” Boyce said.

The theme of the library’s summer event series has been “Reading Takes you Everywhere” and Boyce has taken that theme and built this new, library-exclusive show around it. His magic tricks tie into many classic books.

“I’ll show that books can even take you through time,” Boyce said.

For example, Boyce – or Winston, rather – is not content with just materializing a rabbit from the ether or a hidden dimension found in the bottom of a top hat. Winston uses H.G. Well’s science fiction masterpiece, “The Time Machine,” adds some magic and a flux capacitor – which “Back to the Future” fans will recognize as the key to time travel, and – poof – a rabbit appears from somewhere in time.

The children in the audience Monday at the Armona library stood in line after the show, not to meet Winston, but to meet his rabbit assistant, Gizmo, something he’s gotten used to, he said.

“The rabbit, he’s the star of the show,” Boyce said.

Though one audience member did let Winston know how much he enjoyed the show.

“My mind was like — ‘how does he do it,’” Christian Suarez said. The 13-year-old said he wants to become a magician when he gets older.

Throughout the show, children volunteered to assist Winston with magic tricks like making animals appear out of thin air and coloring comic books with magic wands.

Boyce has been performing as Winston the Magician for 40 years.

Boyce used to a do a clown show, but had to quit after a series of “evil clown” hoaxes made national news in 2016, causing an unlikely national panic.

“It's been phased out, which I’m fine with. Putting on the makeup took an extra hour anyway,” Boyce said.

Winston the Magician will perform in Lemoore, Hanford and other spots around Kings County throughout the week. The shows are free.

The Kings County Library hosts Winston the Magician at various branches this week. The shows are free.

Wednesday: 11 a.m. at the Lemoore Civic Auditorium, 2 p.m. at the Stratford library.

Thursday: 10 a.m. at the Hanford Civic Auditorium, 1 p.m. at the Corcoran library