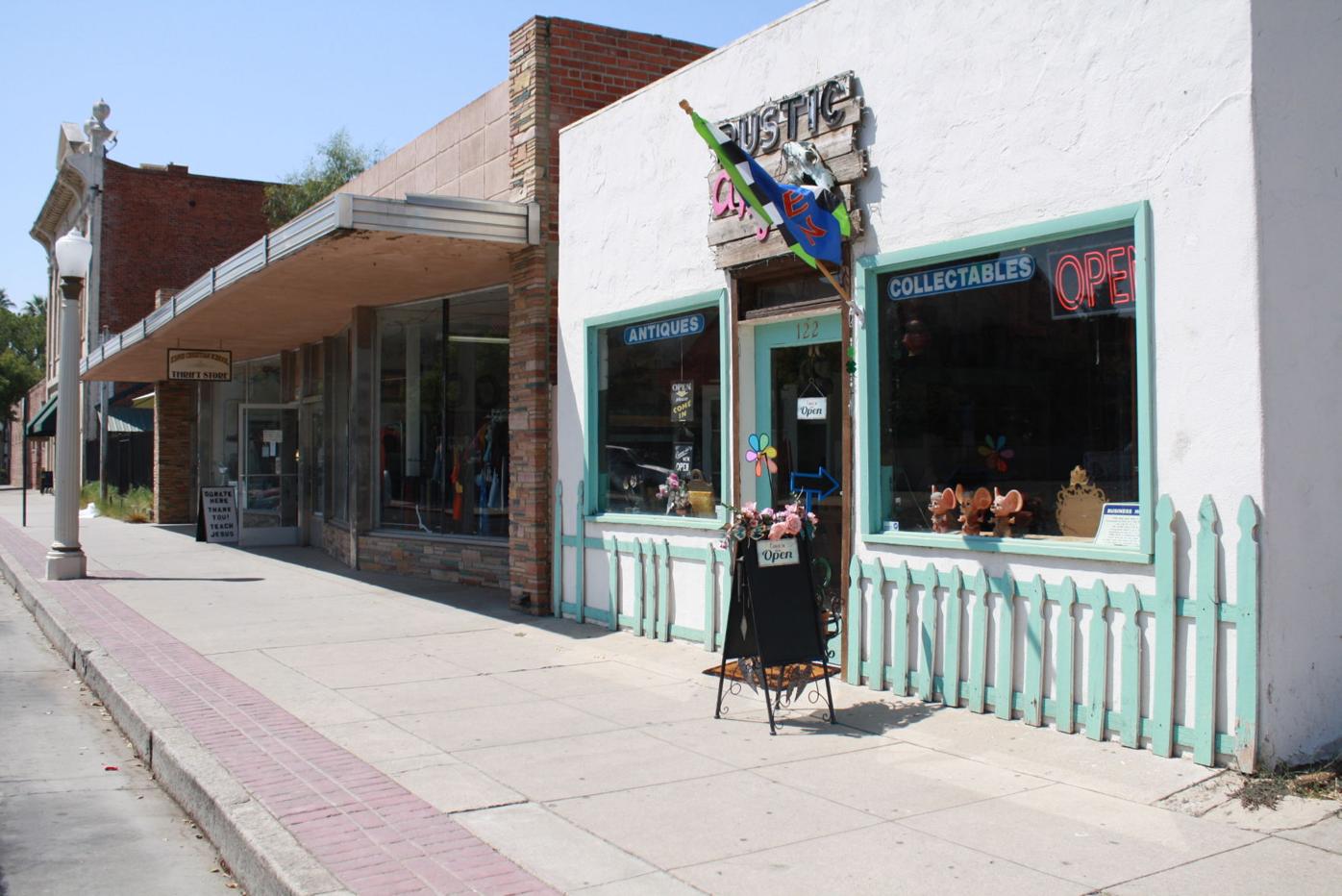 Rustic Angel Antiques store and Kings Christian Thrift Store have removed all items, except for allowed signs, from the sidewalk after receiving warnings from the city. 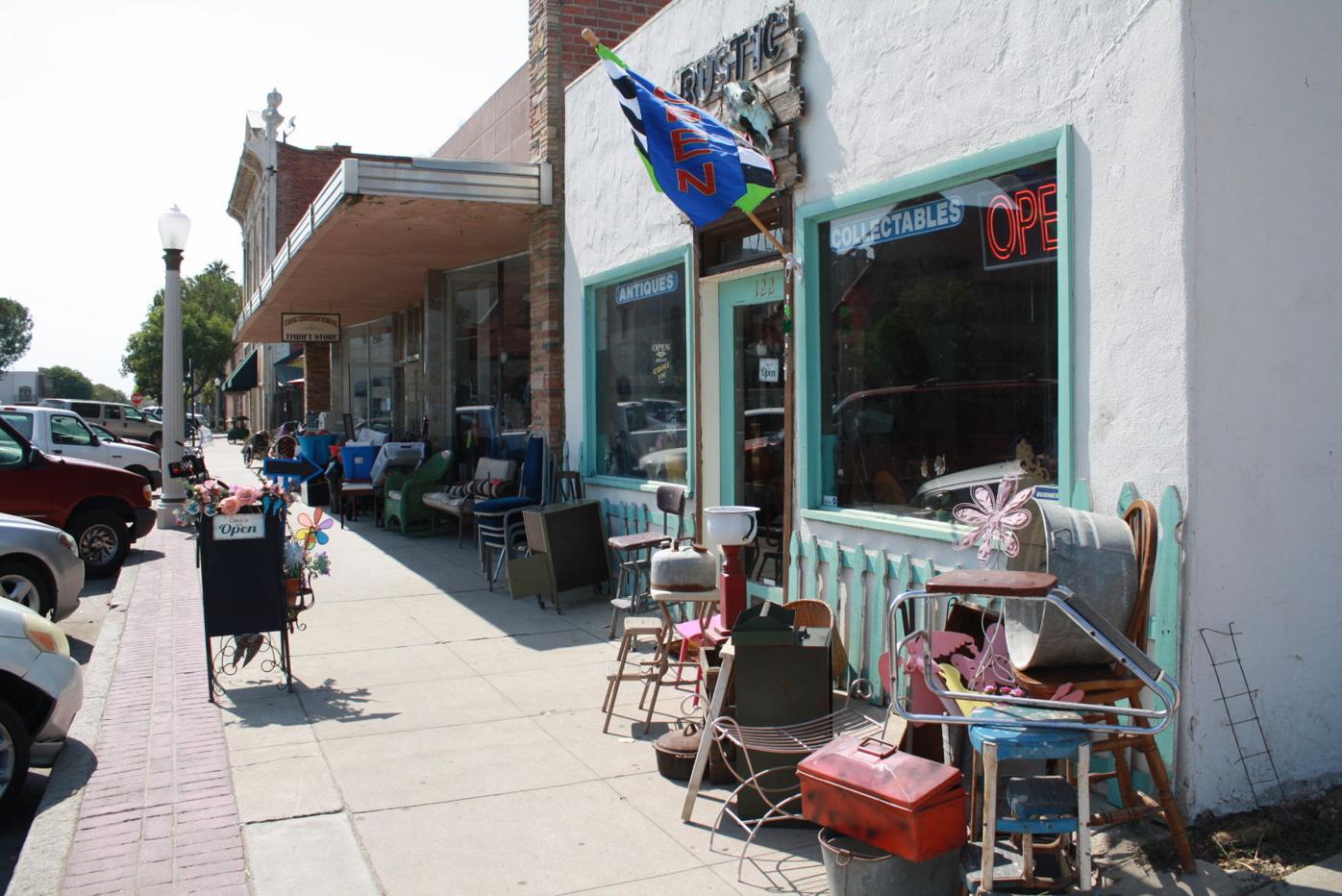 Rustic Angel Antiques and Kings Christian Thrift Store received notices for being out of compliance with city sidewalk ordinances on Aug. 17. Now the sidewalk is empty of merchandise in front of the stores.

Rustic Angel Antiques store and Kings Christian Thrift Store have removed all items, except for allowed signs, from the sidewalk after receiving warnings from the city.

Rustic Angel Antiques and Kings Christian Thrift Store received notices for being out of compliance with city sidewalk ordinances on Aug. 17. Now the sidewalk is empty of merchandise in front of the stores.

HANFORD — When small businesses in downtown received notices ordering them to move all outdoor merchandise back inside, the Libertarian Party of Kings County put its foot down.

The organization has condemned the recent city ordinances, saying it believes these measures “inhibit downtown business from profiting.”

“The Libertarian Party of Kings County condemns this outrageous attack on downtown businesses,” the party’s chairman, Kenneth Olsen, said in a press release.

The statement said the party has heard “unsubstantiated rumors” that the ordinances are part of a “conspiracy to drive down the value of buildings downtown to the point where developers buy up land and completely rebuild.”

“These new laws are an overreach of the city government into the privacy of the business owners of Hanford,” the statement reads. “It again appears to the Libertarian Party of Kings County that the city government is working to hurt downtown businesses, rather than help them.”

In the case of the Rustic Angel Antiques store on Eighth Street, the owners received a letter on Aug. 17 giving them one day to comply with the ordinances.

The ordinances impact how businesses display items in front of the structure. Items will only be permitted within an area surrounded by a solid wall or fence, or within a completely enclosed, permanently fixed structure.

Patricia Cardoza, an employee at Rustic Angel, said she places items on the sidewalk because there isn't enough room inside the small store. She also believes the items would draw potential customers into the store, letting them know that it was open.

Cardoza believes the ordinance will hurt the business in the long run. She said business has definitely been down since removing the merchandise from the sidewalk and there are less people visiting the store.

“It’s been quiet,” Cardoza said. “Not as much business as there was before.”

The Libertarian Party says Community Development Director Darlene Mata “snuck” the ordinance into the city’s new general plan without explaining to the City Council the effect it would have on downtown businesses.

Mata refutes the claim, saying the ordinance is not a General Plan issue, only a zoning issue.

“I don’t think she tried to sneak it past anybody,” Hanford Councilman Martin Devine said.

Devine admitted he didn’t know how the long the ordinance has been around or if it has changed. He said it should have been enforced the entire time.

Mata said the city tried to be considerate of the business owners by letting them have one or two items in front of their stores, but more items kept being added and the problem got out of control.

To be fair to every business, Mata said the city must now enforce businesses that are even just mild violators of the ordinance. She said if any passersby happen to trip, the city could be held liable.

Mata can’t say for sure whether having merchandise on sidewalks helps or hurts the businesses, but did say most downtown businesses are in compliance.

The businesses can still keep their “a-frame” signs next to the buildings, but not in the middle of the sidewalk or near the curb, Mata said. A minimum of 4 feet of sidewalk must remain clear.

Devine said from his personal experience, he has gone into a business after seeing something outside that caught his eye. He said it’s a form of advertisement and sees no problem with businesses having merchandise outside, unless it poses a safety hazard by blocking the sidewalk.

“If any downtown business owners have a problem, they need to speak to council about it,” Devine said

The Libertarian Party of Kings County said they call upon Hanford residents to elect leaders who will vote against imposing new ordinances onto the people of Hanford.

so does this include outdoor seating as well?

I've walked past those shops when they had merchandise displayed on the sidewalk and there was still room for me and my dog to get by. The ordinance should be repealed.

Maybe the Libertarian Party should develop guidelines and gather business support then step up to the podium at the next council meeting and make their proposal and case. Regardless if an ambulance chasing lawyer sues the city for tripping over an obscure crack or a baby stroller they will be sued! Council needs to serve the Citizens, so take it to them if you have valid facts and good ideas.

Can anyone cite the number of passersby who have tripped over a display item on the sidewalk over the last 10, 20 or even 30 years in Hanford?

If you are so concerned for the safety of the people you should check into the people riding bicycles on the sidewalk customer leaving my business almost got hit by one of those people riding their bicycle and I did get hit and then that person was getting off to confront me because I said hey get off the sidewalk you jerk you just hit me if it had not been for my husband walking next to me and grabbing me I would have hit the sidewalk. I called the city the next day and their comment to me was they have a right to ride on sidewalk and I said to the city so who pays for my injuries? He said you go after the rider , are you kidding me, wow that was a very smart answer, so I say the items put out on street should be allowed at least you can see them and go around them. The bike riders are going to fast to dodge, silly CITY OF HANFORD!!