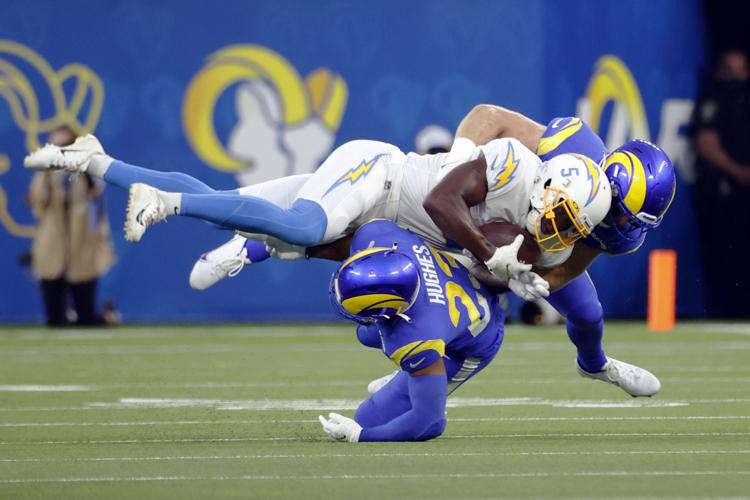 Los Angeles Chargers wide receiver Josh Palmer (5) is tackled by Los Angeles Rams defensive back JuJu Hughes (23) and another defender during the first half of a preseason NFL football game Saturday, Aug. 14, 2021, in Inglewood, Calif. 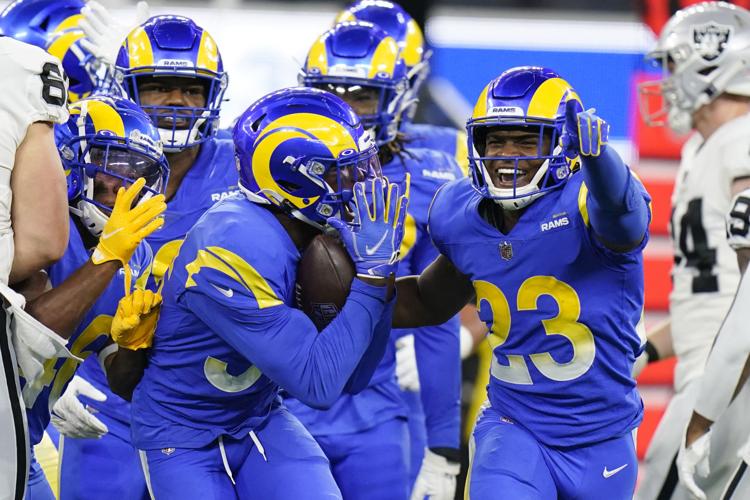 Los Angeles Rams safety J.R. Reed, left, celebrates his interception with JuJu Hughes (23) during the first half of a preseason NFL football game against the Las Vegas Raiders Saturday, Aug. 21, 2021, in Inglewood, Calif.

Los Angeles Chargers wide receiver Josh Palmer (5) is tackled by Los Angeles Rams defensive back JuJu Hughes (23) and another defender during the first half of a preseason NFL football game Saturday, Aug. 14, 2021, in Inglewood, Calif.

Los Angeles Rams safety J.R. Reed, left, celebrates his interception with JuJu Hughes (23) during the first half of a preseason NFL football game against the Las Vegas Raiders Saturday, Aug. 21, 2021, in Inglewood, Calif.

Juju Hughes is entering his second season with the Los Angeles Rams in 2021 and is hoping to continue to contribute for the team that signed him as an undrafted free agent in 2020.

Hughes has started at safety for the Rams in both preseason games so far, recording 10 total tackles. He was tied for the team lead with seven tackles in the Rams preseason open against the Los Angeles Chargers on Aug. 14. He then had three tackles against the Las Vegas Raiders on Aug. 21

The Rams conclude their preseason schedule on Saturday, Aug. 28 against the Denver Broncos. Then open the regular season on Sunday, Sept. 12, hosting the Chicago Bears.

Recently, The Hanford Sentinel was able to catch up with the former Hanford High Bullpup and Fresno State Bulldogs athlete during a phone interview to talk about what it has been like so far this preseason.

Q: How has training camp been going so far this year?

Juju: It has been good. I am in year two and am more comfortable, I know more what is going on. I am considered a veteran (vet) now and not a rookie like I was last year. It just feels good to be here training with the guys and getting back to it. It has been good grinding and getting to it.

Q: What has been the biggest difference entering this season, compared to entering your first season?

Juju: I learned how to be a pro and how to be a vet. Last year, I sat back and learned how to study and how to take care of myself and my body. That is a big part coming into this year. I feel very comfortable, and I think it kind of shows in how I have been playing. Last year, I was kind of scared to mess up more but when you get comfortable you can settle down and make plays. You can just do your job and take chances on the ball and be where you are supposed to be and try to make plays. I am comfortable with the guys, our scheme, coaches and just better overall.

Q: What was your preparation like this past offseason going into your second year?

Juju: There was a lot of training that went into it, but a big thing I learned from the vets is training smartly. Anybody can go out there and train 100 hours and think you’re working hard, but it is more so working smart. What do I need specifically work on or what does my game need at this point? What is going to push me to where I need to be and what do I need to capitalize on? It really is training smart for me this offseason that was a big thing.

Q: What was the biggest lesson you learned during your first season in the NFL that you are taking with you into this season?

Juju: Your body and mental health is everything. You need take care of that. It is one thing we are big on here in this organization and I learned from the vets. I watched how guys take care of themselves, how they recover and staying on top of all that. Even off the field, you need to make sure you are straight. The little things like that I am taking into this year and applying.

Q: What are you looking forward to most for the upcoming season?

Q: How cool is to start to be recognized as a member of the Rams Organization?

Juju: It very cool. You don’t really expect or think of that happening, but I am happy it has. I am happy that I carry myself in a way that I can be talked about like that and be known in the organization. It feels good to know that more people know of you.

Q: This was always your dream to play in the NFL. Coning from Hanford High and then going to Fresno State and now being in the NFL, how has this journey been for you?