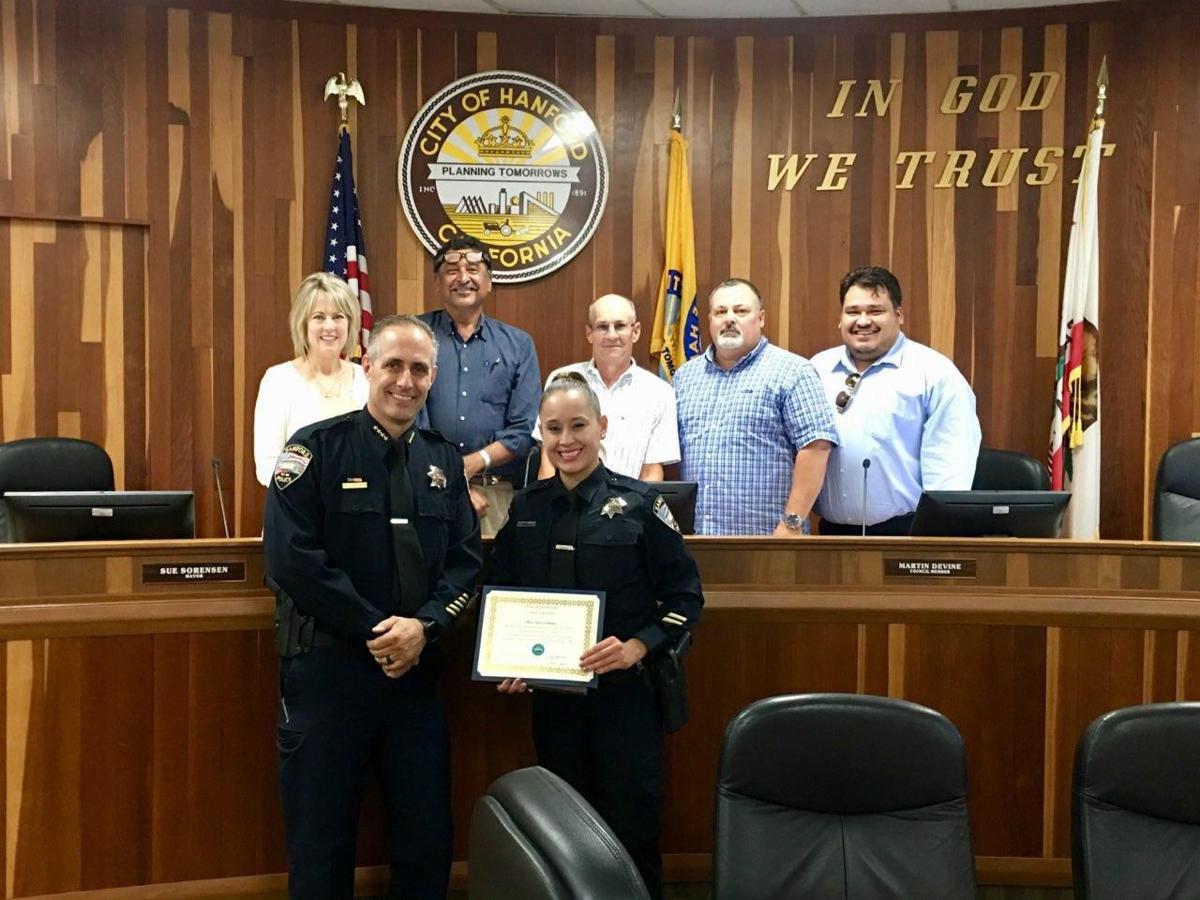 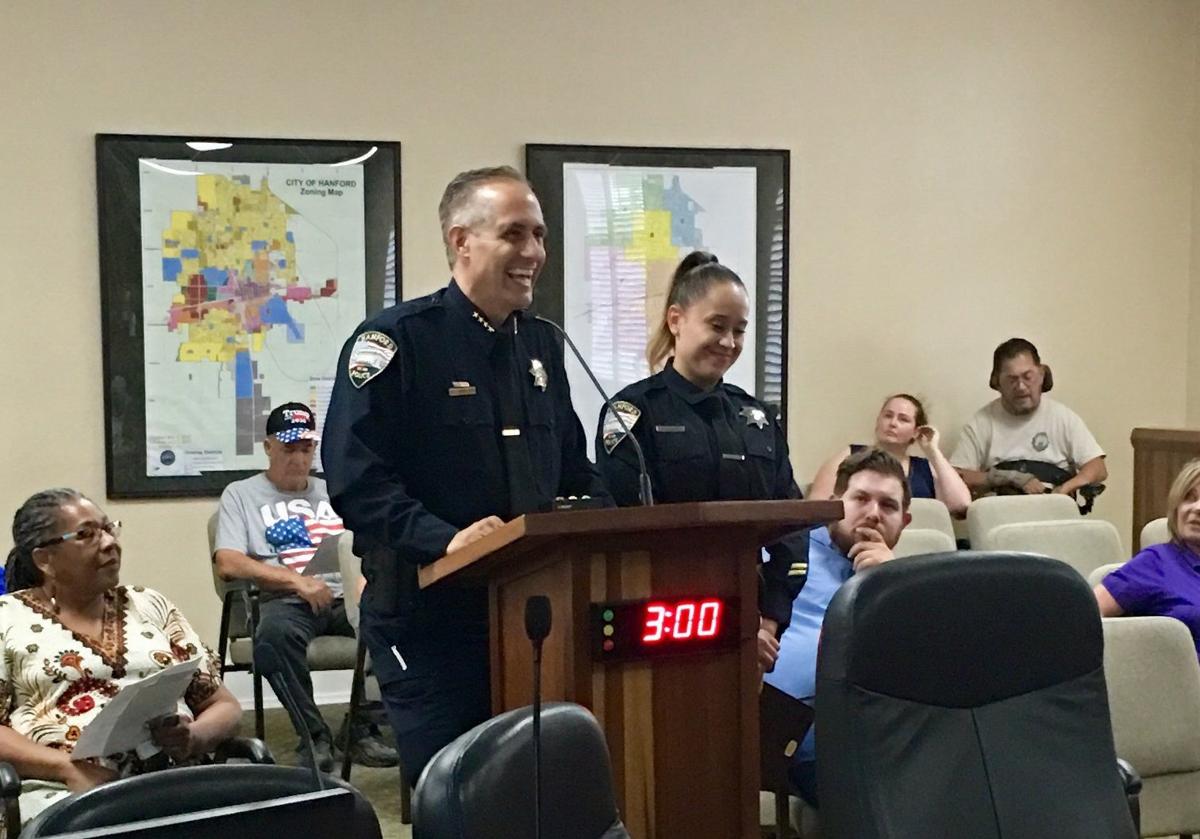 Police Chief Parker Sever speaks about Officer Nancy Gallegos during the Hanford City Council meeting on July 16. Gallegos was recognized at the meeting for receiving a Regional Exceptional Service Award from the National Association of School Resource Officers. 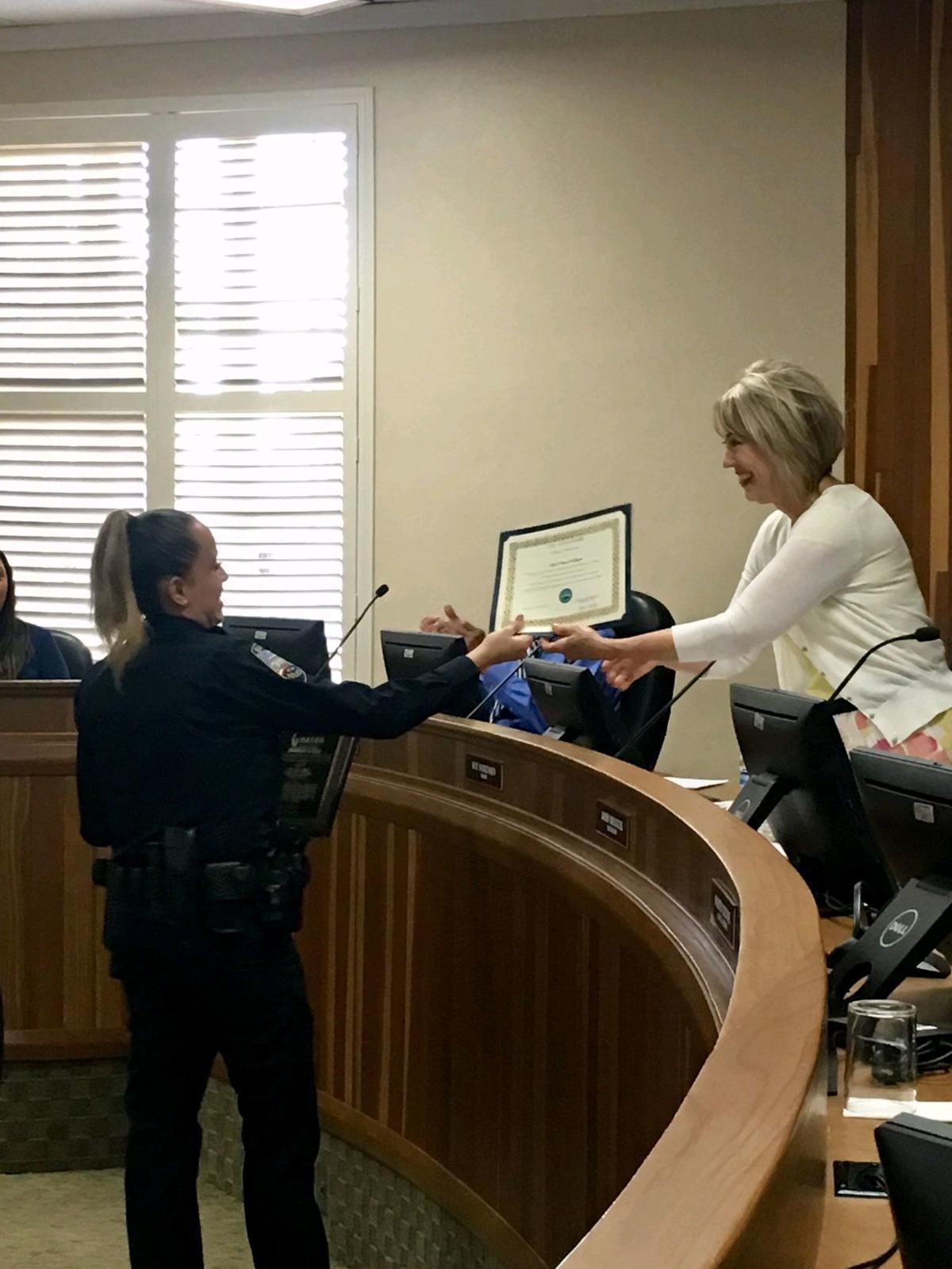 Hanford Police Officer Nancy Gallegos is handed a certificate of recognition from Mayor Sue Sorensen. Gallegos was recognized during the July 16 Hanford City Council meeting for earning a Regional Exceptional Service Award from the National Association of School Resource Officers.

HANFORD — Hanford Police Officer Nancy Gallegos has a stack of letters that are all about her — she just hasn’t read them yet.

The letters, written by her colleagues and others who know her well, helped her earn a Regional Exceptional Service Award from the National Association of School Resource Officers.

The award was given to Gallegos recently for her for contribution and dedication to the School Resource Officer program and the kids, parents and community she works with, going above and beyond what is normally expected of an SRO.

Gallegos has worked at Hanford PD for six years, the past two as a school resource officer, most recently at Sierra Pacific High School.

Becoming a police officer was something Gallegos said she always wanted to do.

“I just want to make a difference,” she said. “Even if it’s a small difference, I know I’m out there making an impact somehow.”

She initially applied to become a school resource officer to work with high-risk students and hoped to change the way they perceived police officers.

Along with facilitating active-shooter presentations and other demonstrations, Gallegos said most of her job involves building relationships with students and staff and providing a safe environment at the school.

Gallegos enjoys this less serious side of police work, saying she can be herself around the students, joke around and even be goofy.

“So far, it’s been a blessing,” she said. “Everyone has been so good to me and I’m just thankful for that.”

Gallegos said she initially thought she was just being nominated by her sergeant, Stephanie Huddleston, to be in some type of SRO magazine. So when she got an email that said she was the winner of an award, she was in state of disbelief.

Turns out, not only was Gallegos a nominee, she won one of only a few regional SRO awards out of thousands of applications.

What helped Gallegos were the letters sent on her behalf from Huddleston, fellow SRO Per Westlund and administration from SPHS, including Principal Darin Parson and Assistant Principal Ellice Blevins.

Gallegos said she hasn’t read the letters yet because she’s not quite ready. Blevins died from cancer earlier this year and Gallegos said it may be an emotional experience for her to read her letter.

She promised she would read the letters before the new school year begins.

Gallegos attended the awards ceremony on June 24 in Pigeon Forge, Tennessee, with over 2,000 people in attendance, a majority of them SROs like her.

The Hanford City Council members recognized Gallegos for her accomplishment at their meeting Tuesday and thanked her for her dedication to keeping the community safe.

At the meeting, Hanford Police Chief Parker Sever said Gallegos has excelled at her position. He said the school staff loves her and he’s even gotten requests from other schools to make her their SRO when positions are rotated.

“She’s also an extremely kind and caring person,” Sever said. “I like seeing her around the PD because when I see her it makes me smile a little bit.”

When Sever was diagnosed with cancer in 2017, he said Gallegos organized a fundraiser on his behalf. She did the same when Blevins was diagnosed.

“She has a good heart and is an extremely humble person,” he added.

Along with her position as an SRO, which includes working at games and dances, Sever said Gallegos is part of the department’s honor guard and runs its Instagram page.

“We are extremely pleased to have her as a school resource officer and officer for the Hanford Police Department,” Sever said. “We thank her for all she does for our schools and also our department. She makes us look good.”

Gallegos thanked Sever, Huddleston, Capt. Karl Anderson, and especially Westlund for their support. She said Westlund makes the program succeed and has been an incredible mentor to her.

“I’m very honored and privileged working for such an amazing community and department,” Gallegos said.

HANFORD — The monthly Board Meeting for the Kings Waste and Recycling Authority on Wednesday, May 27, 2020 is canceled.

Police Chief Parker Sever speaks about Officer Nancy Gallegos during the Hanford City Council meeting on July 16. Gallegos was recognized at the meeting for receiving a Regional Exceptional Service Award from the National Association of School Resource Officers.

Hanford Police Officer Nancy Gallegos is handed a certificate of recognition from Mayor Sue Sorensen. Gallegos was recognized during the July 16 Hanford City Council meeting for earning a Regional Exceptional Service Award from the National Association of School Resource Officers.