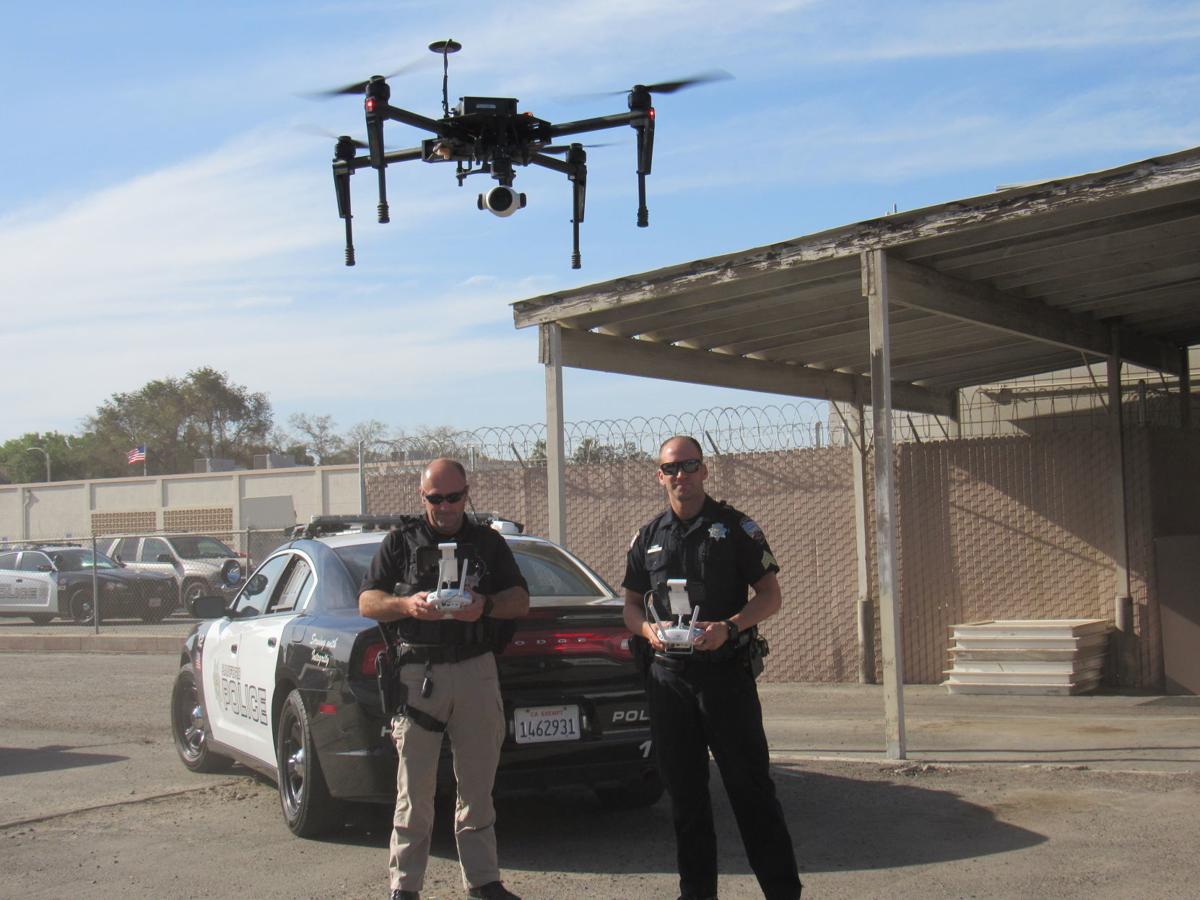 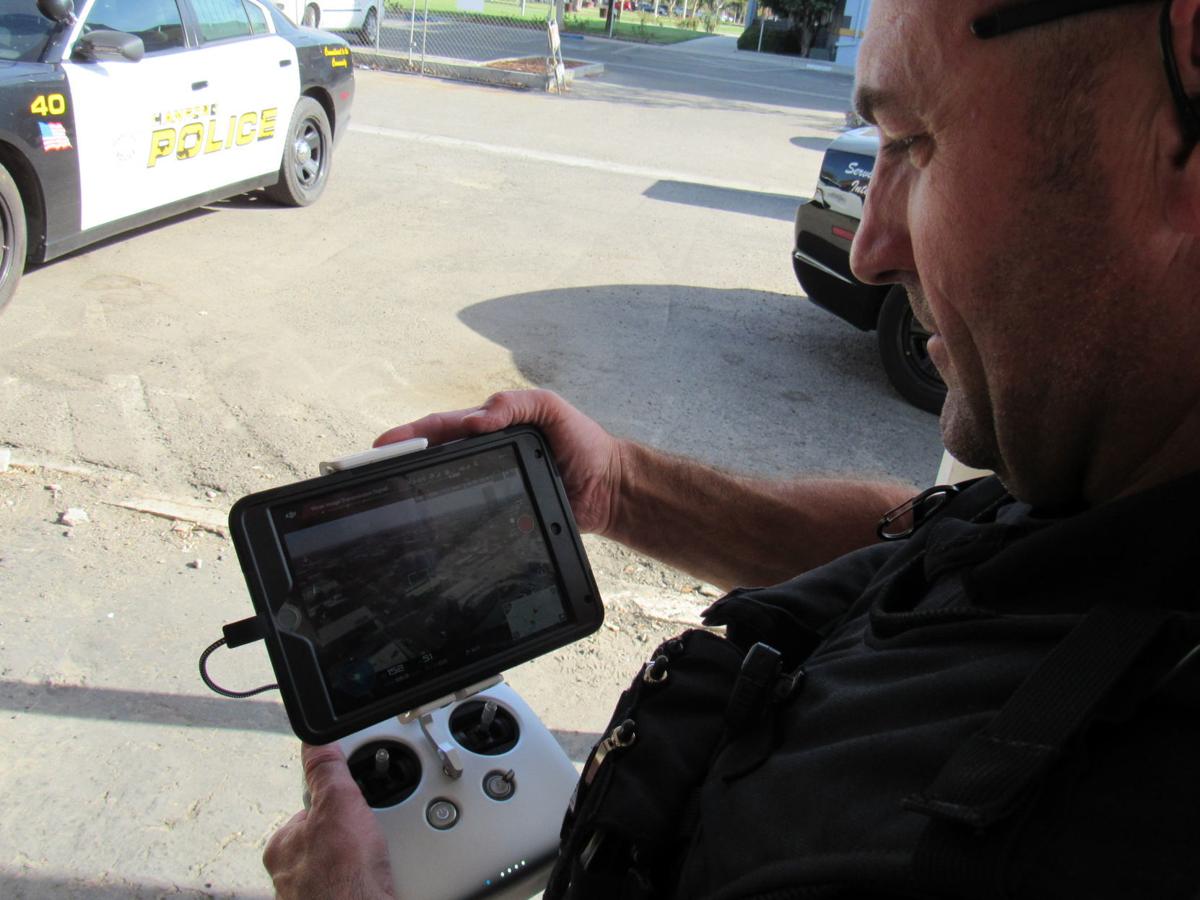 Cpl. Christifer Barker watches from his controller as the Hanford Police Department's new drone hovers in the air.

HANFORD — The Hanford Police Department has a new program that’s giving officers a vantage point they’ve never had before.

HPD can now be added to the list of law enforcement agencies that are starting drone programs. Local agencies like the Kings County Sheriff’s Office and Kings County District Attorney’s Office have drones already.

The department’s drone program is brand new and has only been in existence for about 1 month, but Sgt. Chad Allen, Cpl. Christifer Barker and Cpl. Jason Gustin had been working with drones for over a year in hopes of starting a program.

Last year, Allen, Barker and Gustin took it upon themselves to start the program using their own personal drones after they realized how beneficial they could be in police work. In doing so, they were able to show the department’s administration the benefits of starting a drone program.

“They bit off on it, thankfully, and are now 100 percent into it just like we are,” Allen said. “So it’s moving along good.”

The newest addition to the department is the Matrice 100, a drone made by DJI, one of the leading companies in drone technology.

The officers leaned toward the Matrice 100 due to its ability to be modified for whatever specific needs the department has, whereas other drone models usually have only one specific purpose, Allen said.

The camera can easily be changed out to a different camera to fit the department's needs and has the capabilities of multiple drones.

“Upfront the cost was a little bit more, but in the long run it will be cheaper and more cost effective because we’re able to modify it without that overhead cost,” Allen said, adding the drone is a much quicker option than using the county’s plane due to its small size and ability to get lower to the ground.

Altogether the drone, including a pilot controller and an observer controller, a camera, extra batteries and the case was about $9,000 and was budgeted by the department last year.

The drone can be used to search for missing people; search for suspects who are running from officers or hiding on roofs; perform reconnaissance for the SWAT Team; photograph crime scenes from an aerial point-of-view; document fire scenes; record video or take photographs for training purposes or presentations; and generally help officers avoid dangerous or high-risk situations.

Allen said the drone is also used as a tool for community relations.

“Just like K-9s and motorcycles, for some reason everybody loves to see these things,” Allen said.

As far as flight capabilities are concerned, Allen said the drone can fly for about 1.5 hours on one battery charge and as far away as one mile depending on the location. He also said it can reach up to 35 mph and fly as high as one mile in the air, though Federal Aviation Administration regulations require it be flown below 400 feet.

The officers fly the drone through an application on their phones or iPads, which they said is exactly the same as their personal drones and is pretty simple and user friendly. The drone can be programed to hover or circle around one spot and if it travels out of range, it will fly back and land where it took off.

Barker said the technology is also great at communicating and letting the user know how much flight time is left on the battery.

The officers still use their personal drones when working in situations where a more compact drone is useful, but now that the department has its flagship drone, they are definitely hoping to expand the program in the future with multiple smaller drones that can easily fit in a patrol car and be quickly taken out for day-to-day use.

“I think the police department and the administration that’s backing us on this realizes that this is the future of law enforcement and this is where it’s going to go,” Allen said.

On November 19, 2020, the sun appeared to dim ever so slightly in deference to the passing of Mauro Ganiron. A gentle, charismatic,brown-skinn…

Madeline Antionette Garcia Montes, passed away unexpectedly on November 20th, 2020 surrounded by her daughters. Madeline was born in Hanford a…

Cpl. Christifer Barker watches from his controller as the Hanford Police Department's new drone hovers in the air.