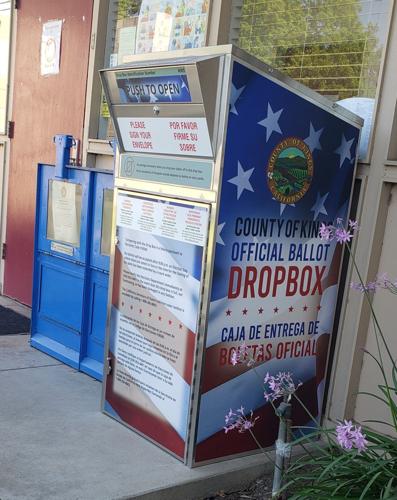 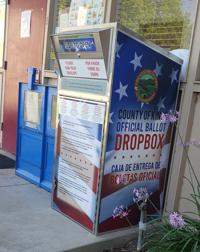 This ballot drop box, located at the Kings County Commission on Aging in Armona, is one of 11 that can be found in Kings County. 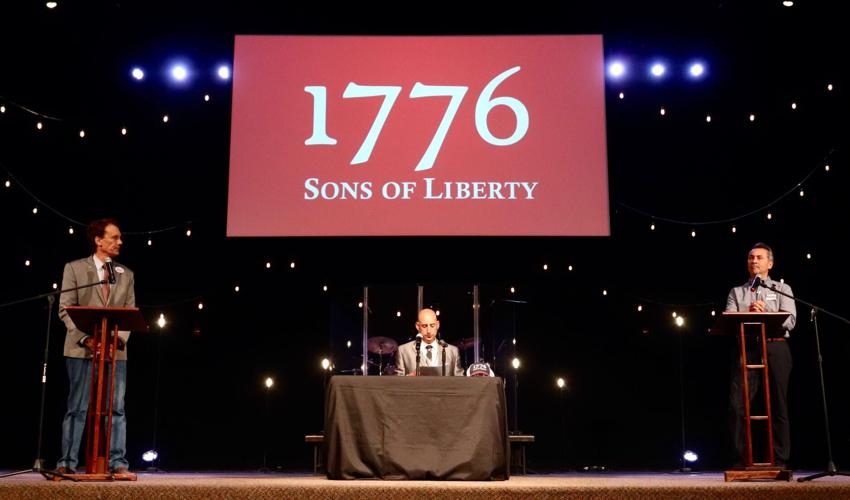 Over 300 people attended debates sponsored by the group 1776 Sons of Liberty at the First Baptist Church in Hanford on May 2. Here, Chris Mathys and Adam Madeiros, who are running for the 22nd District, prepare to talk issues.
1 of 2

This ballot drop box, located at the Kings County Commission on Aging in Armona, is one of 11 that can be found in Kings County.

Over 300 people attended debates sponsored by the group 1776 Sons of Liberty at the First Baptist Church in Hanford on May 2. Here, Chris Mathys and Adam Madeiros, who are running for the 22nd District, prepare to talk issues.

Kings County voters will have a lot of options when they hit the polls for the June 7 primary.

In addition to multiple state-wide primary elections, the ballot features many races and measures that would affect Kings County residents specifically.

The following are local issues to be voted on. Depending on what part of Kings County and which district you live in, your ballot may look slightly different.

Measure F is the lone measure on the ballot and it would adopt a .5% Transactions and Use Tax Ordinance. The ordinance would add an additional .5% to the sales tax, bringing it up to 7.75% in most of Kings County and 8.75% in Corcoran.

If adopted, the tax increase would be effective on Jan. 1, 2023. The proceeds, estimated at $11.7 million per year, would be used exclusively to support the personnel, infrastructure and equipment needs of the Kings County Fire Department. The ordinance needs 50% plus one vote to pass.

Proponents, including Kings County firefighters, say that the funds would go toward increased staffing and better equipment, including upgrades to an “aging” fleet. Opponents point out that the ordinance would not benefit Lemoore or Hanford City fire departments and that tax revenue gathered in those cities would be used outside of those communities.

Three seats on the County Board of Supervisors are up for grabs, though only two of those are contested.

A three-way runoff race in District 1 sees Edward Neal, a farmer, and Martin Chavez, a farmer relations director, challenging incumbent Joe Neves. If one of the candidates receives 50 percent of the vote, they will automatically win the seat. However, if no one manages to get that share of the vote, then the top two vote-getters will run against each other in the fall.  The district encompasses Lemoore and Stratford.

Incumbent Doug Verboon is running unopposed for re-election in District 3, which covers the northern sections of Hanford and Lemoore.

Fagundes was elected to the position in 2014. Hacker, a former Kings County deputy district attorney is a current partner in the Dias Law Firm.

Once solely comprised of the 21st District, the recent census has caused Congressional districts to be redrawn in a way that will see the County be represented by the 20th and 22nd districts.

Republicans James Macauley and James Davis are also on the ballot, as are Democrats Ben Dewell and Marisa Wood.

Incumbent Melissa Hurtado, a Democrat, faces challengers Nicole Parra and Bryan Osorio from the left side of the aisle and Gregory Tatum and David Shepard from the right.

No write-in candidates have been approved by the County.

Residents of Kings County have a myriad of options in terms of how to vote.

Ballots have been sent out and can be returned by mail, no stamp required, by ballot drop box or at any voting center.

More voting stations will open closer to Election Day. The following voting centers will be open from 9 a.m. to 5 p.m. Saturday, June 4 through Monday, June 6 and 7 a.m. to 8 p.m. Tuesday, June 7.

Official drop boxes are now operational and located at: