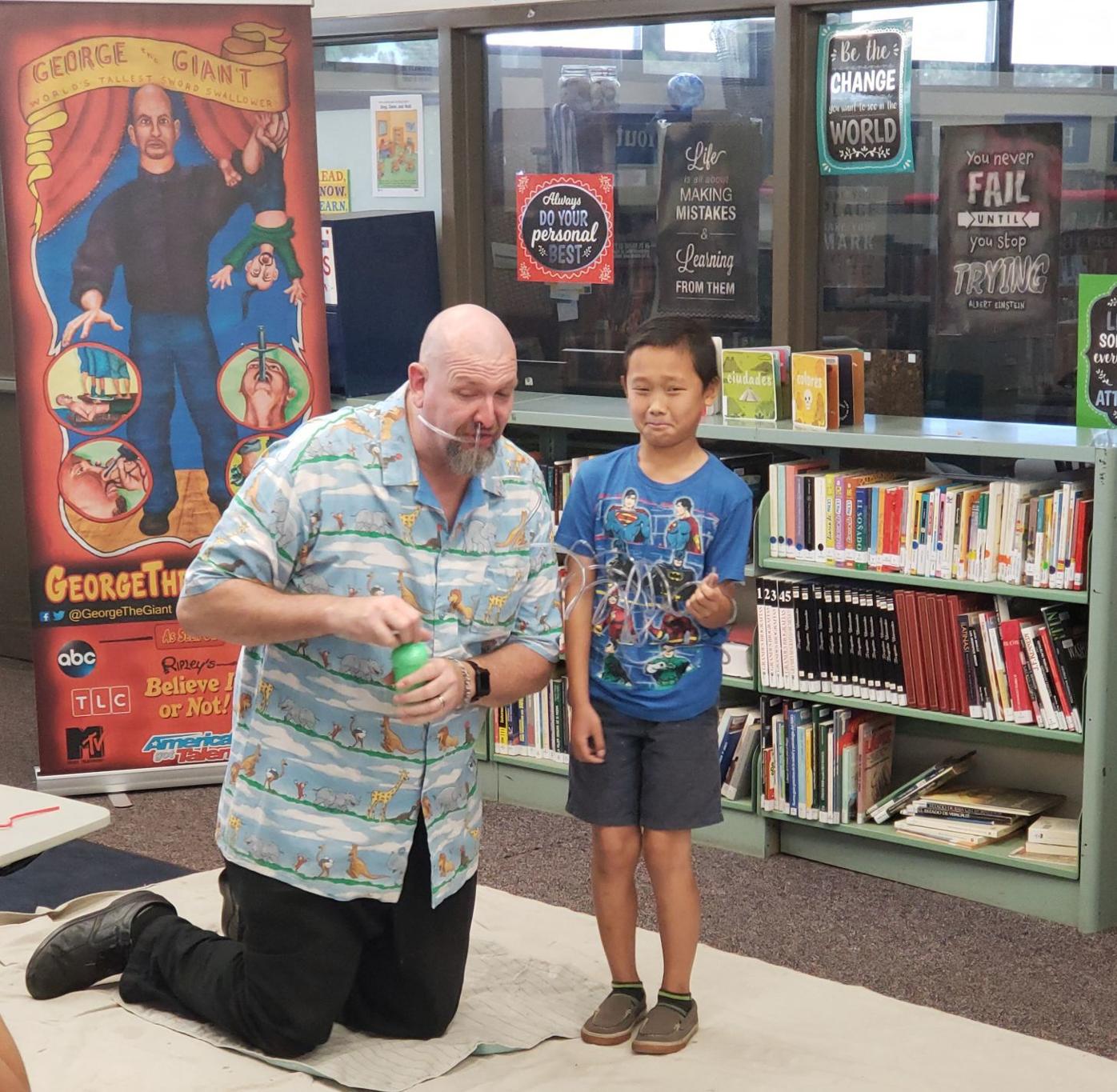 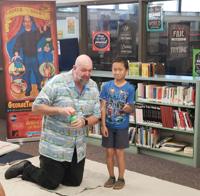 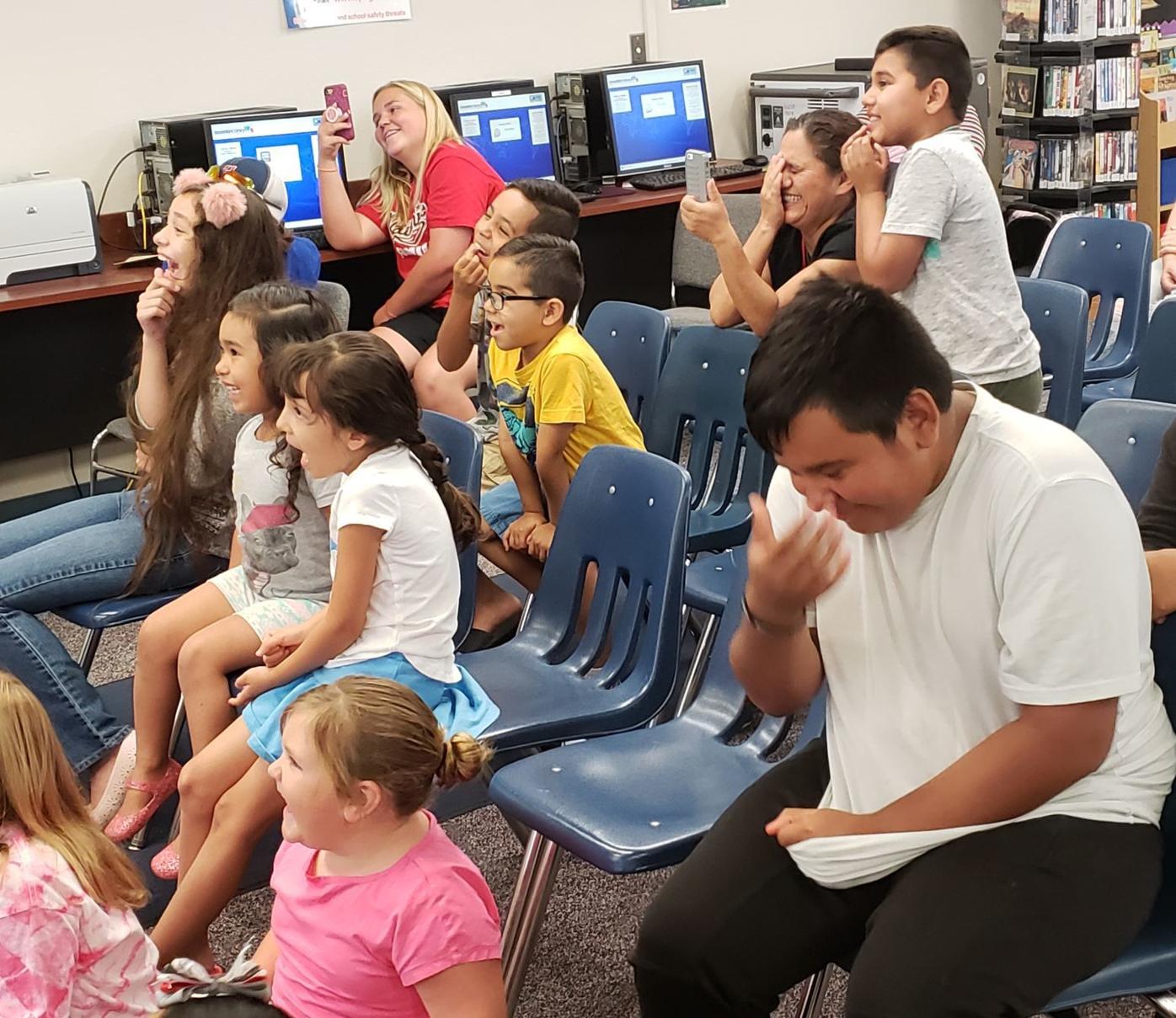 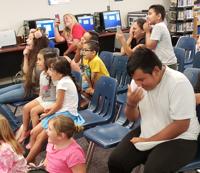 Children and parents react to a sideshow performance Monday at the Armona Library. 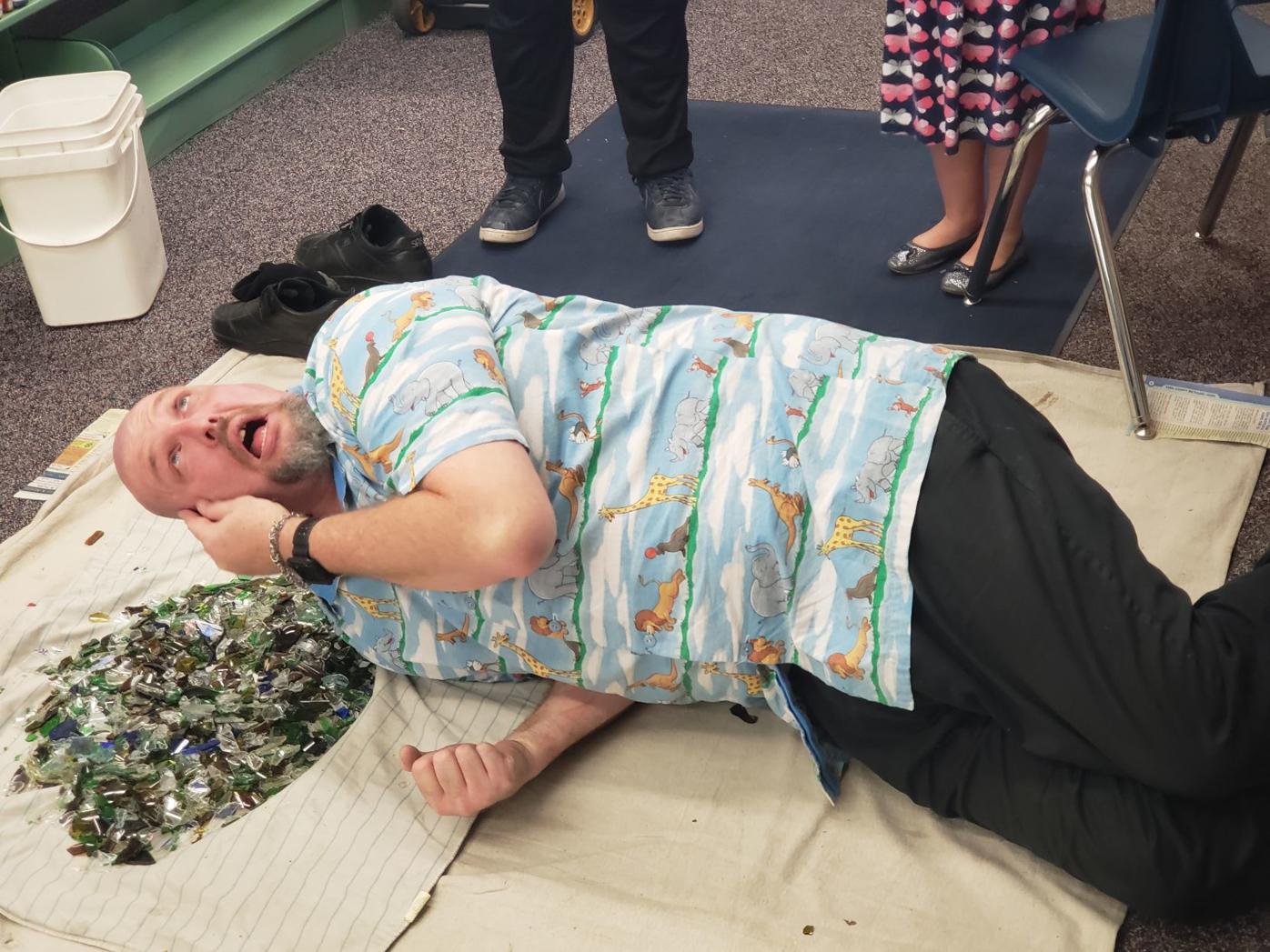 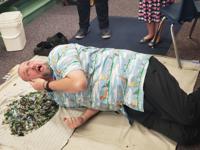 George the Giant recovers after a stunt Monday at the Armona Library.

Children and parents react to a sideshow performance Monday at the Armona Library.

George the Giant recovers after a stunt Monday at the Armona Library.

ARMONA — Sideshow performer George the Giant will bring the circus to local libraries this week.

George “The Giant” McArthur will perform sideshow acts while teaching children about the history of the sideshow and the importance of being an individual.

“I want [the children] to come to a comedy stunt show and leave with a little education. I slip in a little knowledge so that when they leave they say, ‘I learned something — how did that happen,’” McArthur said.

McArthur has been a sideshow performer since the early ‘90s and has been featured on many television shows and movies, including Tim Burton’s “Big Fish.”

The performer stands at over 7-foot tall and was casting shadows over his teachers at 8 years of age.

McArthur has performed for audiences all over the world, from the television reality show competition “America’s Got Talent” to live shows in places like Turkey and Japan. He said he prefers shows for children because of how they respond to experiencing the unique art form for the first time.

McArthur said that the children who come to the library shows go wild for the sword-swallowing tricks, just as he did as a kid. A trick he invented for “America’s Got Talent” called “crazy straw” also gets a big reaction. The trick involves drinking milk — through his nose — via a straw long enough to wrap around a volunteer.

During Monday afternoon’s performance at the Armona Library, 10-year-old Benjamin Yang volunteered to help with the crazy straw stunt. While the other children laughed, cheered and hid their eyes, Yang looked queasy.

“It was awkward. It was weird and disgusting,” Yang said after the show, adding that he had fun.

“Anything that goes in the nose makes the kids happy,” he said.

Christian Suarez, 13, volunteered for a trick that involved holding a balloon underneath a wooden plank, held up by his legs. McArthur hammered a nail through the plank, popping the balloon — with his bare hand.

“It was terrifying — and then more terrifying,” he said.

Suarez happily volunteered for another stunt later in the show.

McArthur saw his first sideshow performance at age 12 when a sword swallower and fire eater wowed the youngster at the Kern County Fair.

“I was amazed at what the human body could do. To me that was real magic,” the Bakersfield native said.

Later in life, McArthur decided to teach himself how to eat fire, an old sideshow staple, in order to conquer his fear of flame that he acquired after a traumatic incident. Not only did it work, it led to a fruitful career.

Since then, the performer has added sword swallowing, glass walking, being a human pin cushion and more to his repertoire.

Upon revealing a 26-inch sword to the crowd Monday, one child shouted, “it doesn’t look sharp.”

“I’m putting it down my throat so it doesn’t need to be sharp,” replied McArthur to the gasps of the children — and parents — in the audience.

“I like to say my shows are like roller-coasters,” McArthur said, adding that during the show, children will alternate between screaming while covering their eyes and giggling hysterically.

After Monday’s show, the children lined up to take photos with the giant.

Early in his career, McArthur apprenticed with a performer named Bobby Reynolds, hitting the road and performing dozens of times per day while learning the tricks of the trade.

McArthur said that he enjoys the library shows because, as a kid, he would duck into his local library to evade bullies and it was there he experienced all the worlds of imagination that the books offered him. Now, he wants to give a little of that escapism and knowledge back.

“Since the library played such a huge part of my life, I always like to return the favor,” he said.

George the Giant will perform free shows throughout Kings County this week.

Tomorrow: 11 a.m. at the Lemoore Library and 2 p.m. at the Stratford Library.

Thursday: 10 a.m. at the Hanford Civic Auditorium and 1 p.m. at the Corcoran Library.