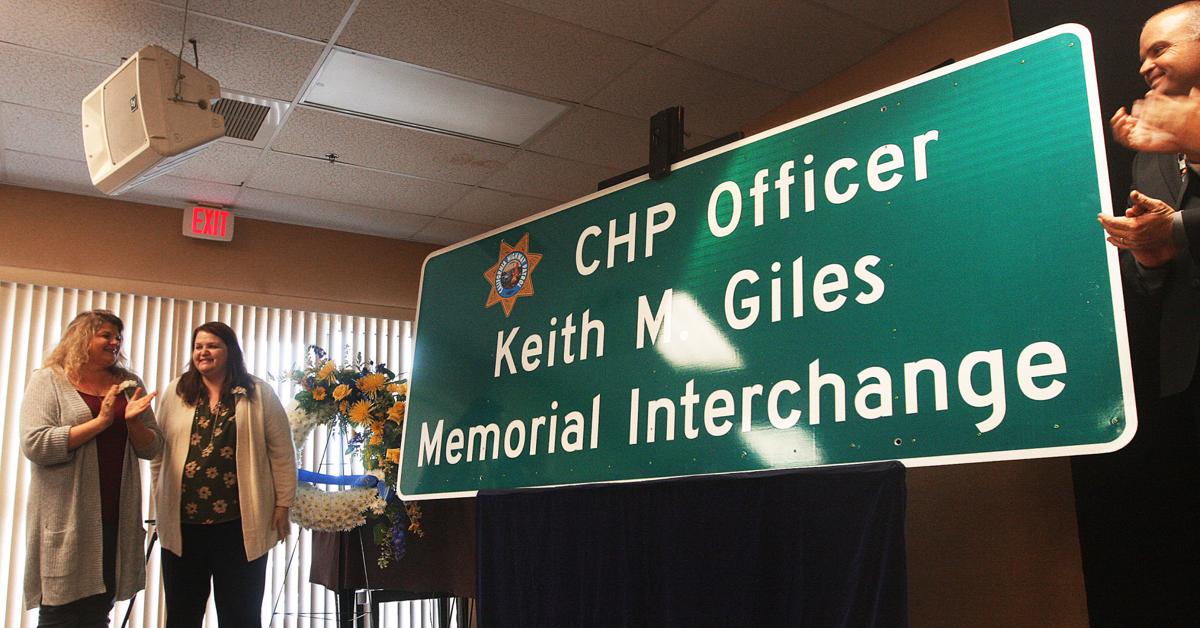 The sign, to be erected at the interchange of Highway 43 and Highway 198 is unveiled at the end of the dedication ceremony at the Koinonia Church in Hanford on Friday morning. 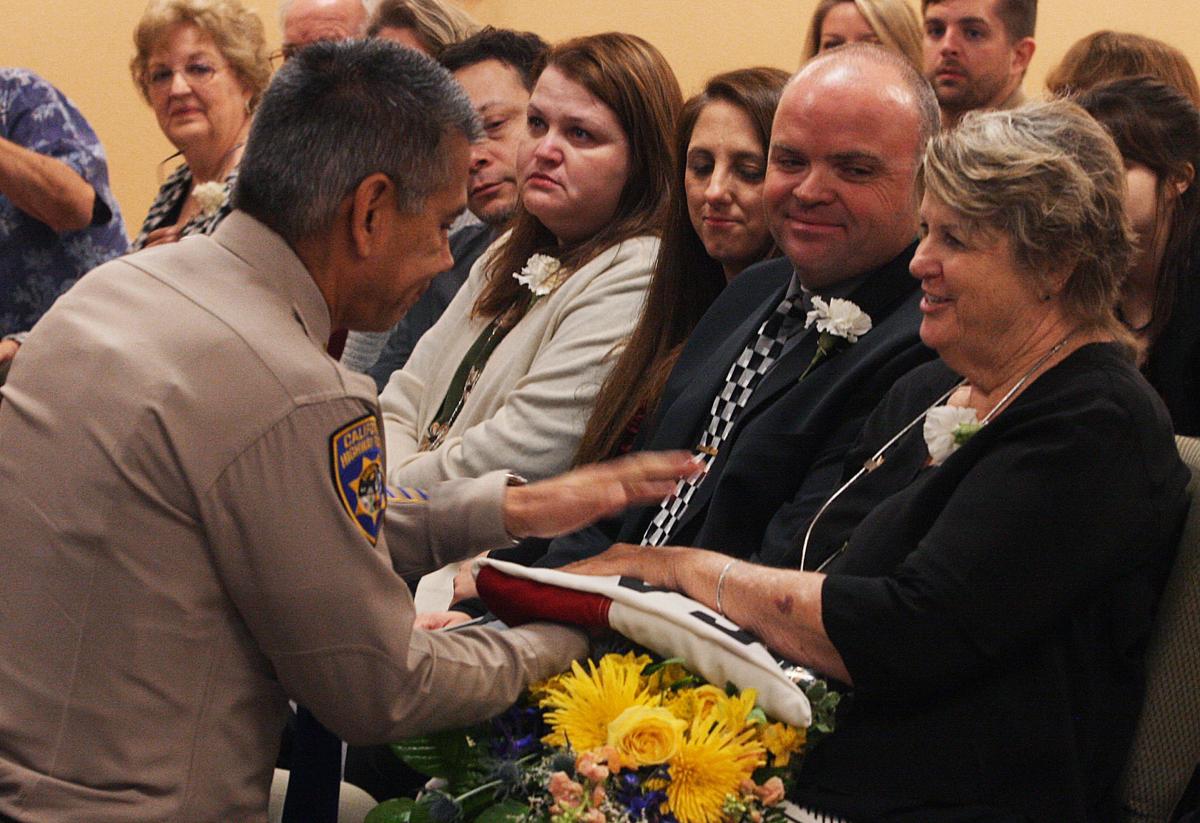 HANFORD — State and local officials remembered a Corcoran native Friday who died more than 40 years ago while serving as a California Highway Patrol officer.

The interchange at state routes 198 and 43 was designated as the “CHP Officer Keith M. Giles Memorial Interchange” during a ceremony at Koinonia Church.

Giles was born in Tulare and raised in Corcoran, graduating from Corcoran High School in 1958 before attending College of the Sequoias and California State University, Fresno. After college, he served in the Army and worked as a farmer.

He graduated from the CHP academy in 1970 and was assigned to the Santa Fe Springs area.

On Aug. 25, 1974, Giles made a traffic stop around 2 a.m. on Interstate 5 near Valley View Avenue. A drunken driver drifted off the roadway and hit Giles killing him almost instantly. Giles was 34 years old.

CHP Commissioner Joe Farrow said the tradition of dedicating memorials to fallen officers didn’t exist when Giles died. At that time, officers were mostly given promises that they would not be forgotten. Those promises, Farrow said, have been assured with the new memorial.

“The state of California doesn’t just give these away,” Farrow said. “They’re given to extraordinary people. And everyone who passes the location of the sign won’t know they whole story. They won’t know exactly what happened. What they will know is that an extraordinary man who displayed valor, who represented the California Highway Patrol, was killed in the line of duty.”

Lt. Dave Knoff, commander for the CHP’s Hanford area office, said freeway memorials are typically placed in the area where the fallen officer worked at the time of their death. Knoff said officials made an exception at the request of Giles’ family, who mostly live in the Kings-Tulare counties area.

“They wanted Officer Giles’ memorial to be in a location they could see and appreciate the sacrifice he made,” Knoff said.

Wilma Giles, Keith Giles’ widow and mother of their three children, recalled her husband’s first day as a CHP officer. He was working a graveyard shift patrolling a student protest at a nearby college. Giles said she worried for Keith Giles’s safety and couldn’t sleep. The sounds of helicopters and sirens made her fear for the worse.

“Early that next morning,” Giles said, “I can still see him now in my mind as he walked through the door with this huge smile on his face, and said, ‘Wow, that was fun. I can’t wait to do it again tonight.’ ”

Giles also reflected on the pain of having her husband taken away by a drunken driver. She said she only recently learned that the driver who killed Keith Giles was convicted of felony manslaughter for drunken driving and sentenced to just “a few years in jail.”

In 2014, Giles said, her brother’s wife was killed by a drunken driver. The driver was convicted for causing a death while under the influence of alcohol and sentenced to five years in prison. Giles said she is hopeful that laws regarding deaths caused by drunken driving will eventually carry more severe sentences to discourage people from drinking and driving.

“It seems my children and I were the ones who received punishment, of a lifetime of living without my husband, and our children living without their father,” Giles said. “And Keith did not have the opportunity to watch his children grow up.”

Farrow presented Wilma Giles with an American flag that was flown over the state capital in honor of her late husband. Farrow said he was fresh out of high school in 1974 and had his sights on a career with the CHP. He recalled his father reading him the article in the Salinas Californian about Giles death.

“My father reminded me of the hazards of a law enforcement career,” Farrow told Wilma Giles. “I was proud that my pursuit of my career choice was going to be the same job that your husband did.”

Capt. David Moeller, commander for the Santa Fe Springs area, said that in 1974, there had been 136 CHP officers killed since the agency formed in 1929. There were 15 officers killed during the four years Keith Giles served.

“I think that’s where the real bravery of being a police officer is," Moeller said. "Every day going back, putting that uniform on to serve people that you don’t even know. That’s exactly what Keith did.”

Well-loved son, father, grandpa, and great-grandpa passed away. His life will be celebrated at a graveside service on Thursday, April 8 at the…

Leonard Oliveira, 83, passed away peacefully at his home on Thursday, April 1, 2021 surrounded by his family whom he loved dearly. He was born…

Zachary was born on February 16, 2003, to Estella (Galindo) Hulbert and Donald Hulbert in Hanford, CA. He gained his angel wings on March 22, …

It is with great sadness that we announce the passing of our dear husband, father, brother, uncle and friend, Jim Brightwell, on February 3rd,…

The sign, to be erected at the interchange of Highway 43 and Highway 198 is unveiled at the end of the dedication ceremony at the Koinonia Church in Hanford on Friday morning. 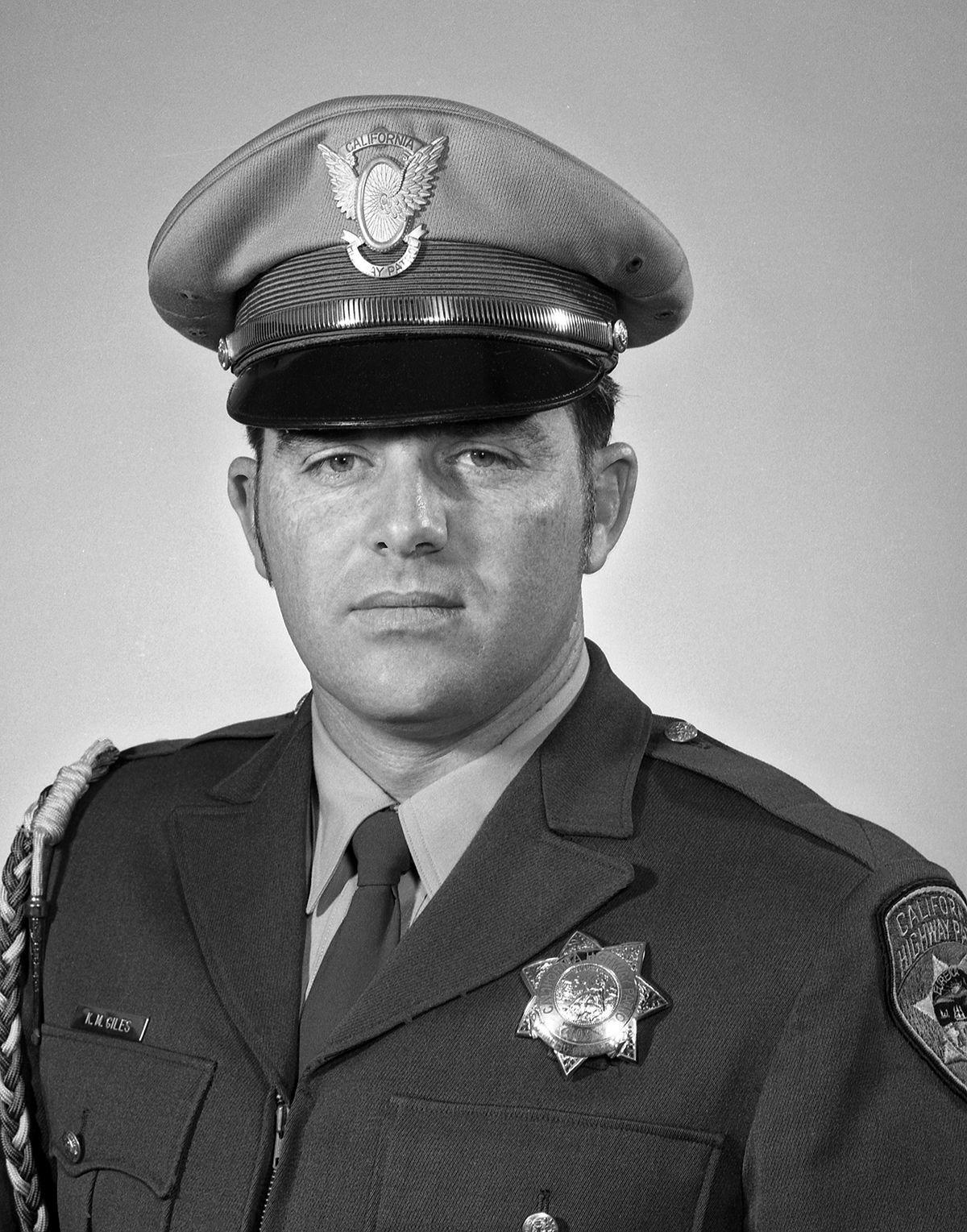