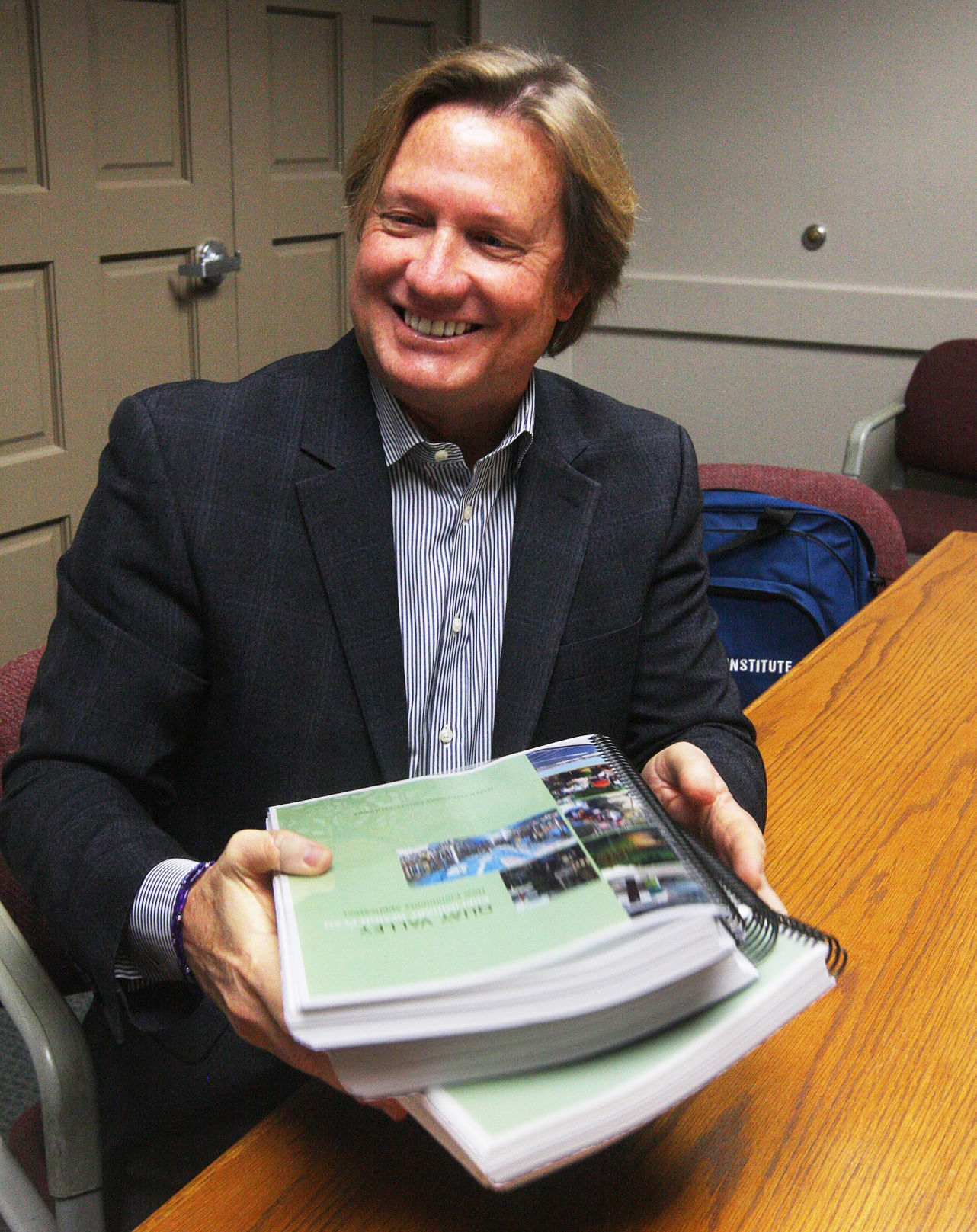 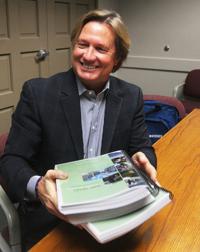 Quay Hays talks about progress toward completing the planning documents required for a proposal for a new, state-of-the-art city to be created along Interstate 5 south of Kettleman City in Kings County.

Quay Hays talks about progress toward completing the planning documents required for a proposal for a new, state-of-the-art city to be created along Interstate 5 south of Kettleman City in Kings County.

Developer Quay Hays, the Southern California-based entrepreneur behind the project, came to the Sentinel Wednesday to tout the concept’s progress toward eventually clearing the planning hurdles it faces with the Kings County Community Development Agency.

Hays plopped down a several-inches-high stack of binders on a conference room table, looked up and smiled.

“All the required planning documents have been submitted to the county at this point,” he said.

Not quite, according to Greg Gatzka, Kings County Community Development Agency director.

Gatzka said the agency still needs to receive a water system master plan along with a water supply assessment.

Gatzka said the county also needs a financing plan, as well as “a lot more information” about the plan to provide public services and how to finance those public services.

“At this point, we don’t have the entire complete submittal for the community plan,” Gatzka said.

The community plan was described by Gatzka as the second phase of a three-stage planning process the Quay Valley concept has to go through.

Gatzka said the first phase, called a preliminary design plan, has been submitted.

He described that phase as a pre-application stage.

Gatzka said the real rubber-meets-the-road moment for Quay Valley is the community plan.

The California Water Service Group website, www.calwater.com, describes it as “the largest investor-owned American water utility west of the Mississippi River” and says the company “serves more than 477,900 customers … throughout the state.”

The company supplies water to the city of Visalia.

Hays said that Grow Holdings LLC, the company he heads that is behind the Quay Valley concept, has reached a deal with California Water Service.

Hays said that, at the city’s full build-out, which he said would be 22,000 homes and approximately 80,000 people, usage would be approximately 10,000 acre-feet of water per year.

An acre-foot of water is enough to cover an acre of land to a depth of 12 inches.

Traditionally, as a general rule of thumb, an acre-foot is considered enough to meet the needs of an average American household for 12-18 months.

Yvonne Kingman, a California Water Service spokeswoman, said that the utility has signed a letter of intent to provide water to a future Quay Valley.

Kingman said that she couldn’t reveal what’s in the letter because of confidentiality clauses and the preliminary nature of the proposal.

Hays said he’s abandoned an attempt to get $73.4 million worth of groundwater rights tied to San Joaquin Valley land.

Those rights have been tied up in court.

A Kings County jury awarded the rights to Quay’s company in 2014, but that decision was reversed earlier this year by the 5th District Court of Appeal in Fresno.

Hays said Wednesday that more detailed information about the new water supply he identified will be revealed in the environmental impact report that will have to be prepared for the Quay Valley proposal.

“We will not initiate that until we have a complete application and all the documents,” he said.

“Nothing has been discussed in detail or presented to us in terms of the water [supply], so we’re still waiting for that information,” Gatzka said.

Hays said the new city would have to have enough tax revenue annually to support government services such as police, fire and roads provided to residents.

“It needs to make sense economically,” he said.

To assess whether that’s the case or not, the county has commissioned an outside firm to conduct a seven-week, $55,000 market feasibility study.

Grow Holdings will pay for the project but will have no influence over the outcome, according to county planners.

The study will, in part, analyze whether eco-conscious millennials are likely to want to live and work in Quay Valley rather than be in established urban areas in Southern California, the Bay Area and the greater Sacramento area.

Hays described several option packages of resource-conserving single-family homes he said will be offered to people interested in moving to Quay Valley.

“We are definitely targeting millennials with our home choices,” he said.

To survive the planning test, the Quay Valley proposal will have to demonstrate that it can create enough employment to support a city.

Hays said jobs could also be created by a hyperloop research facility and test track slated to be built at the site.

A company called Hyperloop Transportation Technologies Inc. submitted design plans in January 2016 for a five-mile long linear test facility at the proposed Quay Valley site, but nothing has happened since, according to Gatzka.

“We’re still in limbo waiting for them to submit their environmental documents,” Gatzka said.

“I have my doubts,” said Harlan Casida, an Avenal resident and former mayor of Avenal. “To me, it’s kind of a pipe dream of somebody’s. It would be better if they chose Avenal or Lost Hills, where there’s already infrastructure, to build that up.”

Hays said he wants to start Quay Valley from scratch in order to build a state-of-the-art, resource-conserving model city from the ground up.

“We’ve got a very large planning team that has been working on this for several years,” he said.

The reporter can be reached at snidever@hanfordsentinel.com or 583-2432.

Gatzka said the agency still needs to receive a water system master plan along with a water supply assessment.

Gatzka said the county also needs a financing plan, as well as “a lot more information” about the plan to provide public services and how to finance those public services.

Big city developer to Country-Bumpkins: "What more could you possibly want from us"? Big City developer betting Country-bumpkins will be wowed with the promise of a new tax base and jobs, jobs, and more jobs; Country-bumpkins will then give away the farm to get them thar jobs: It's worked before... Here's hoping Kings County doesn't take the bait.

Perhaps Quay Hays can team with Elon Musk and plan his new-age development on Mars; it does have water.