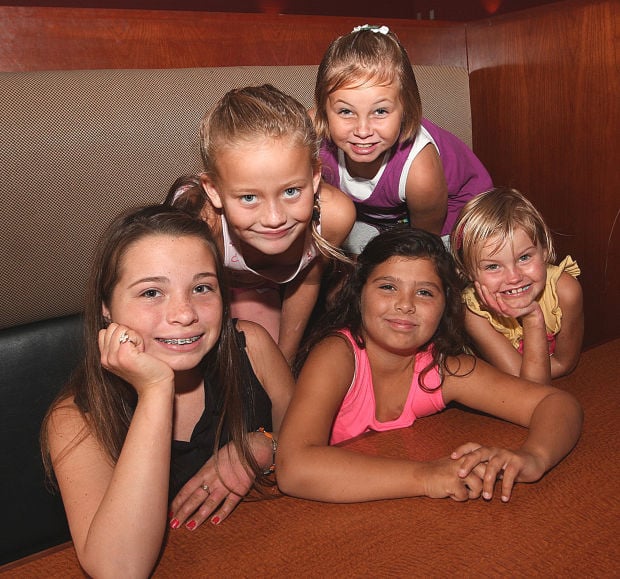 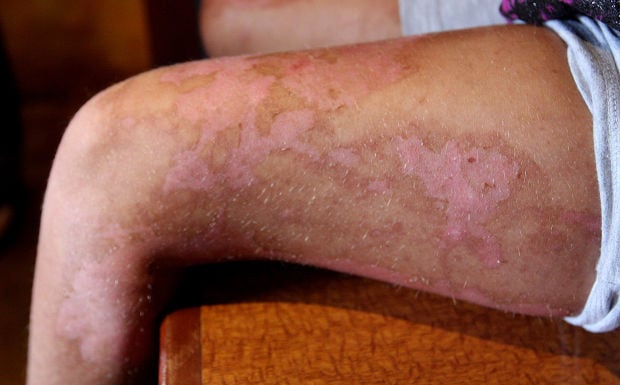 Scars on a leg of one of the victims may last for months. (Gary Feinstein/The Sentinel) 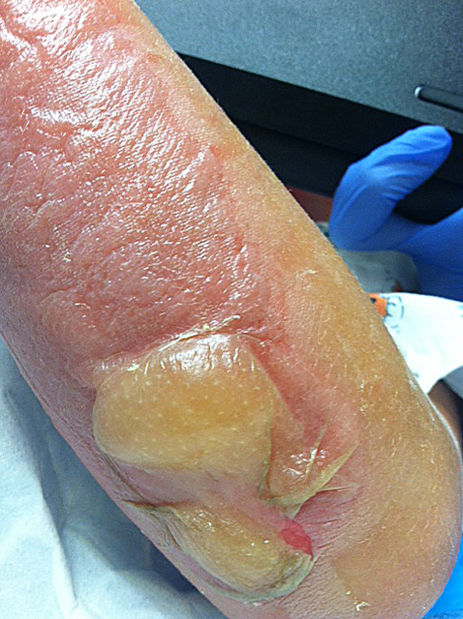 Blisters on an arm of one of the girls burned by lime juice. (Contributed photo) 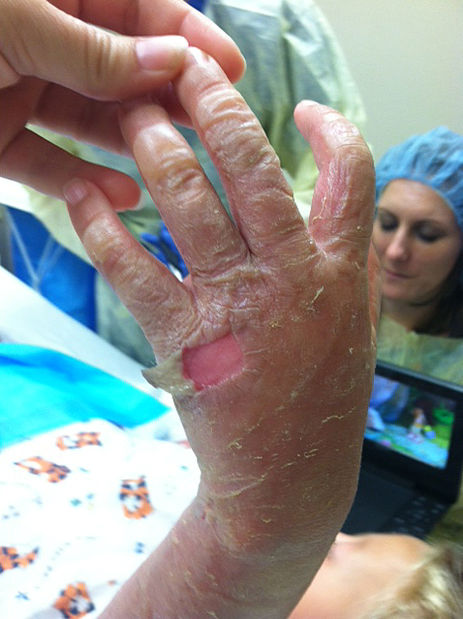 Blisters on a hand of one of the girls burned by lime juice are shown at Fresno Medical Center. (Contributed photo)

HANFORD — Stephanie Ellwanger experienced every parent’s worst nightmare: watching as her daughters were struck down by a mysterious affliction with no explanation.

It happened two weeks ago. What at first seemed to be overexposure to the sun blossomed into softball-sized blisters and second-degree burns. Her girls, Jewels, 12, and Jazmyn, 9, wound up spending several days in an intensive care unit, hooked up to morphine to manage the pain.

No one knew how it happened.

Ellwanger had taken the girls to her mother’s house on Aug. 17 for a pool party.

Three of her daughters’ friends — Reyghan, Candy and Bailey — joined them. They spent five hours in and out of the water: splashing, enjoying the sun, celebrating the end of summer.

When they returned home that night, Ellwanger noticed some redness around the girls’ mouths.

“It looked like they had too much sun,” Ellwanger said.

She rubbed some aloe vera on the spots and sent the girls to bed. The next morning, those spots became blisters. It looked like a severe sun burn, or maybe an allergic reaction.

She gave both girls a shower, scrubbed them down, then applied some hydrocortisone cream.

On Monday morning, Jazmyn woke her up. She said it hurt to speak. When Ellwanger looked at her, she noticed her lips had swollen up. The blisters looked worse.

Something was definitely wrong.

Ellwanger got on the phone with the other parents. All three other families had similar stories: bad sunburns, blisters, redness.

The mother of one girl called Ellwanger in tears, saying she had taken her daughter to the emergency room. The doctor wanted to move her to the burn ward, her injuries were that severe.

Denise Kinser said she woke up to the sound of her daughter, Candy, screaming at the top of her lungs.

“It’s the worst sound a mother can ever hear,” she said. “My little girls crying, saying it hurts, and having no idea what is the matter. No mother should ever go through that.”

She found both daughters, Candy and Bailey, with blisters upon blisters, to the point where parts of their skin “looked like hamburger meat.”

That night, all five girls were admitted to the hospital. Each had second-degree burns covering 15 percent of their body.

“They had sunblock on. I thought everything was fine,” Ellwanger said. “I had no idea what could’ve caused this.”

The doctors had an idea: Acid. The symptoms on all five girls matched those of a severe chemical burn. Had they been playing with something they shouldn’t have?

Ellwanger ran the day’s events back in her head. It couldn’t have been the pool water. She’d gone swimming with the girls and had none of the symptoms. So what did they do that was unusual?

Then she remembered the lime tree.

A neighbor had a large lime tree that grew over the fence into the backyard where the girls went swimming. They had picked some of the fruits and squeezed them out into imaginary tea cups in their play lemonade stand.

Was there something on the limes? Ellwanger wondered about pesticides. She mentioned this to the doctors, then went home to do some research.

A few attempts on Google yielded a term she’d never heard before: Phytophotodermatitis, a chemical reaction that makes bare skin hypersensitive to ultraviolet light. It’s caused by contact with photosensitizing compounds which occur naturally in some fruits and vegetables — like limes.

The list of symptoms were identical to those her daughters had.

She remembered the girls crushing the fruits, juice sliding down their arms, splashing their legs, hitting their faces.

She went back to the hospital.

“It’s so uncommon and unheard of that the doctors didn’t even consider it,” Ellwanger said. “We had to sit them down at a computer and make them read the articles we found.”

Medical officials said they’ve seen minor versions of this at backyard barbecues when someone squeezes a lime into their drink and sprays the juice on their chin. But in those cases, it only resulted in a few blisters. They rarely see cases this severe.

The girls were kept in intensive care for three days, then transferred to pediatrics. They remained hospitalized for almost two weeks.

The future, however, remains uncertain. The doctors are advising all of the girls to stay indoors for six months, if not longer.

“They can’t be sure that they’ve healed all the way,” Ellwanger said. “We’re not sure if it’ll reactivate next time they go out into sunlight.”

It may even be permanent.

“We just don’t know,” Ellwanger said. “There’s potential for this to be a life-changing thing. We’ve had to tell the girls they won’t be doing any sports this year.”

Kinser said her girls will have to be home schooled this year. She keeps them inside during the day and takes them out to play in the evening when the sunlight isn’t a threat.

“We’re just going day by day at this point,” she said. “We don’t want this to reoccur.”

Ellwanger said Jewels and Jazmyn have adjusted well to the changes.

“Once the pain is gone, they started running around and acting normal,” she said. “I don’t think they really understand the extent of what they’ve been through.”

While the pain is gone, the scars remain. All five girls bear the marks on their hands, face, legs, arms and torsos.

“I feel guilty. When you send your kids off with another parent, you expect them to come back unharmed,” Ellwanger said. “I guess we learn the hard way. Who would’ve known that these innocent little fruits could do so much damage?”

But no ill will exists between the families. If anything, it’s brought them closer. They gathered at Me-N-Ed’s Pizza on Saturday to celebrate the girls’ continued recovery and release from the hospital.

That’s not enough, though. Since it happened, Ellwanger has been spreading the word on Facebook. She’s asked friends and family alike to share her story.

“If we can prevent this from happening to anyone else, then we want to get our story out there,” Ellwanger said. “I feel responsible for what happened. There was no way of knowing, but these girls were still under my care. I don’t want to see anyone else go through what we’ve been through.”

The reporter can be reached at 583-2425. To comment on this story, go to www.HanfordSentinel.com.

Our beloved Mother and Grandmother, Helen Maxine Badsky, born on May 26, 1935 in McCurtain, Oklahoma passed away peacefully at her home surrou…

Randy Eugene Johnston, of Lemoore California, passed away Wednesday, October 21, 2020, with his family by his side.

Scars on a leg of one of the victims may last for months. (Gary Feinstein/The Sentinel)

Blisters on an arm of one of the girls burned by lime juice. (Contributed photo)

Blisters on a hand of one of the girls burned by lime juice are shown at Fresno Medical Center. (Contributed photo)