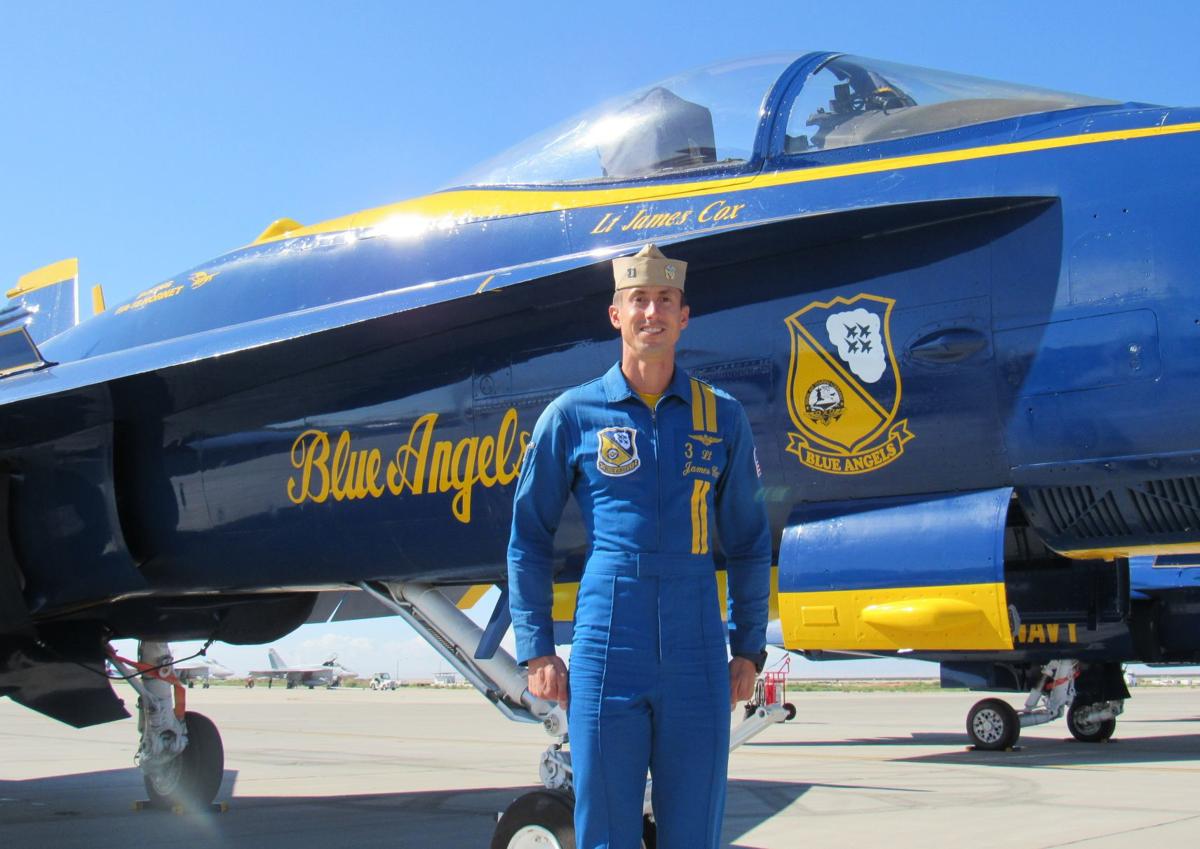 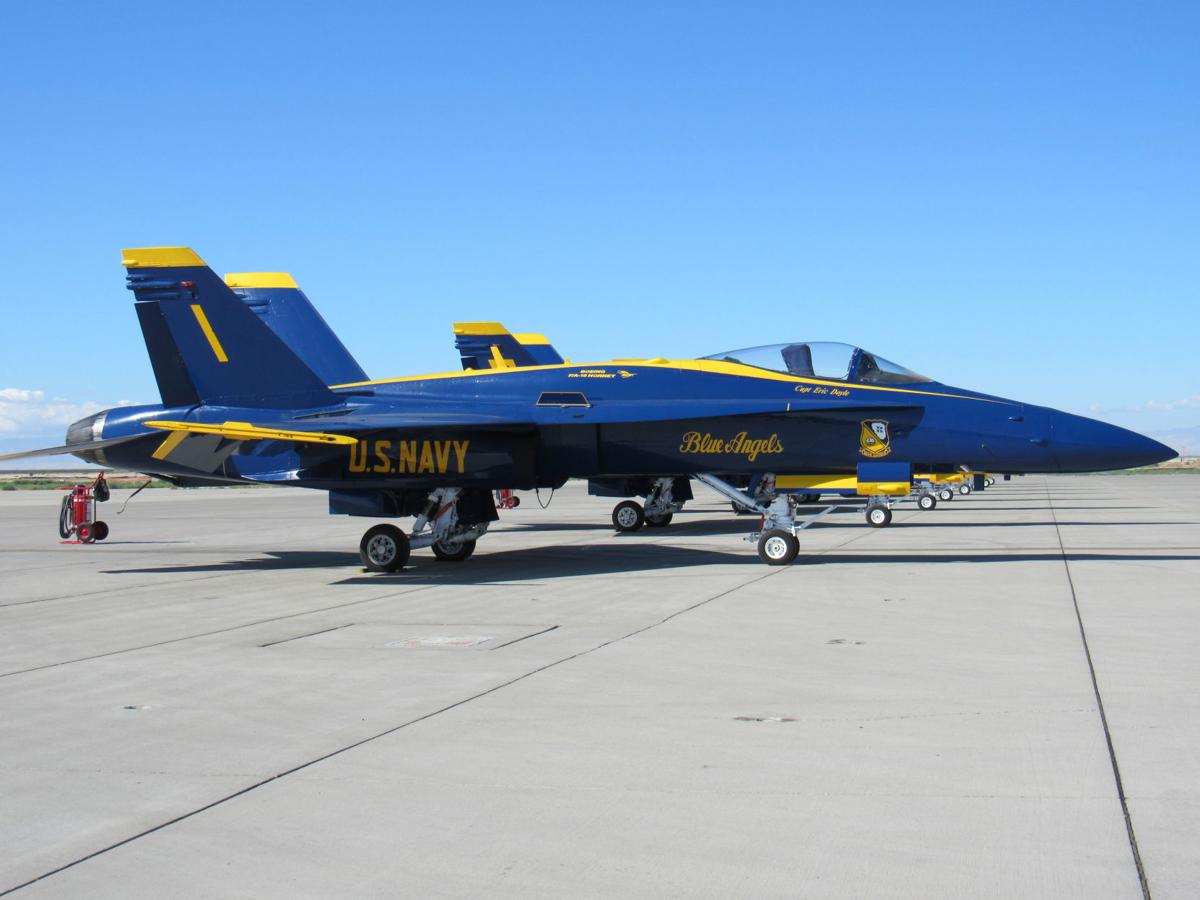 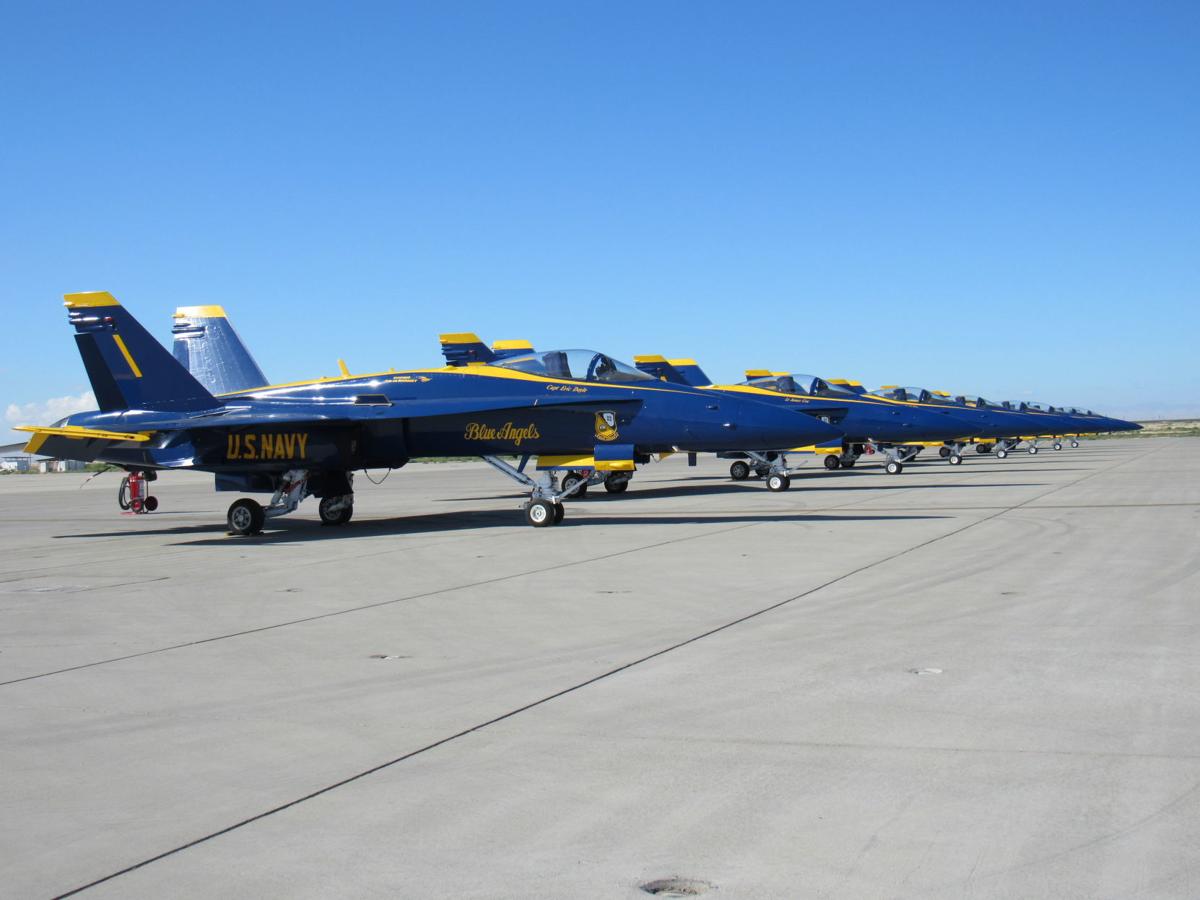 NAVAL AIR STATION LEMOORE — The Blue Angels flew over Hanford and Lemoore Sept. 18, landing at Naval Air Station Lemoore ahead of the Air Show this weekend.

“We are extremely excited to be back in the Central Valley,” said Lt. James Cox, a pilot with the Navy’s six-jet precision flight demonstration team.

This is the first time the Blue Angels will be back at NAS Lemoore in eight years, since the base’s last air show in 2011.

Cox said it’s very meaningful for the pilots to walk around the flight line at the base and see the jets, maintainers, fleet and operation, because that’s who they represent.

He said it’s truly inspirational to see the Navy at work and makes the entire team proud to be doing what they do.

For Cox, who is coming up on his first full year with the team, being on the Blue Angels has been a full-circle experience.

“When I was 10 years old I had Blue Angel models hanging from my ceiling in my room,” he said with a huge grin. “So this is a truly humbling and incredible experience for me to be here.”

Cox’s father was also a pilot, so he’s been around Naval and Marine Corps aviation all his life.

“I always wanted to be a pilot,” Cox said.

The team goes through a winter training from January-March in El Centro in California’s Imperial Valley. There, Cox said the pilots not only learn flight demonstration, but the whole team comes together to learn the entire air show season, from flying and maintenance to everything else that goes into making a great show.

As the air show season begins, Cox said the team practices Tuesday and Wednesday at their home base in Pensacola, Florida, before flying to their destinations and practicing Thursday and Friday at the show site.

While showcasing the pride and professionalism of the Navy and Marine Corps by flying is always the biggest draw for the Blue Angels, Cox said the best part about being on the team, and what makes him most proud, is the community outreach.

He said they get to visit all sorts of places like hospitals, nursing homes, cities and schools to talk to people or kids who may not be familiar with the military and to show them a little about what they do.

Cox said the Blue Angels aim to inspire everyone to strive to be the best at what they do.

“Flying the demo is truly rewarding and takes a lot of hard work, but the community outreach portion of our mission is truly what makes us all tick on this team,” Cox said. “As long as we are able to affect the life of one person, I think it was all worth it.”

Petty Officer Fredy Nunez, a logistics specialist with the Blue Angels team, said there is a lot that he loves about what he does, especially the people he works with and the people he gets to meet.

The San Bernardino native is part of the team that coordinates and plans everything the team needs on a day-to-day basis to perform their tasks, like financials, aviation reparables, tools and uniforms.

Nunez, in his first season with the team, said one of his favorite parts about working with the Blue Angels is hearing the touching stories from the pilots about when they were young and how they were inspired by the team.

His other favorite part is meeting new people at each of the stops.

After helping out with the visual demonstration on the ground and assisting the pilots launch out, Nunez said the rest of the team hands out pamphlets, stickers and posters. While interacting with the crowd, he said some people even ask them for autographs.

Nunez also said the public holds the team to a high standard on what the military should be.

“We love representing everyone that’s in the Navy,” he said.

A lot of the ground team haven’t had the chance to sit down and watch all of the maneuvers from the show, so even after being with the team for almost a year, Nunez said every once in a while they see something cool they’ve never seen before.

“There are a lot of things that still amaze me,” Nunez said.

Cox said he and the entire Blue Angels team were excited to be at NAS Lemoore to represent their friends, family and colleagues on the flight line. NASL is the team’s first stop on a west coast tour that will also include San Diego, Sacramento and San Francisco.

“We are going to make this air show — our first one — the best one out here in California,” he assured.

Attendance and parking are free and gates will open at 8 a.m.

For more information, including information about premium seating tickets, go to www.lemooreairshow.com