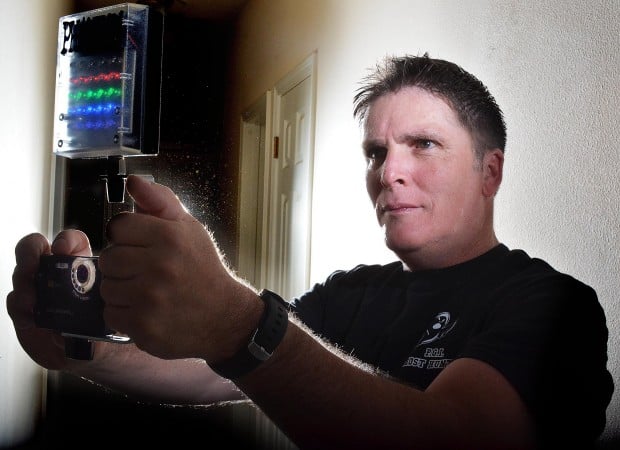 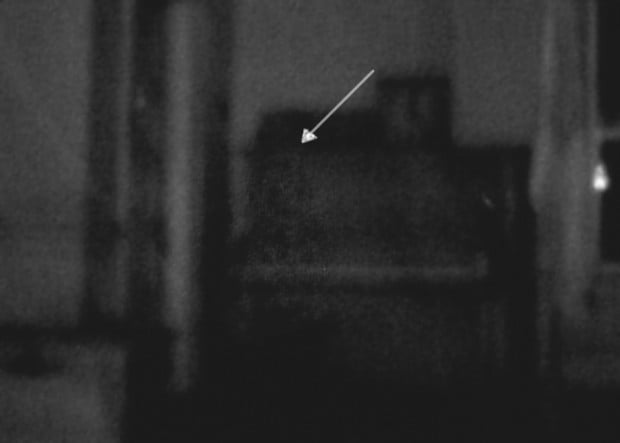 In his free time, Petty Officer 1st Class David Frees likes to take a step beyond the unknown.

By day, he's an aviation structural mechanic with Strike Fighter Squadron VFA-125. By night, Frees, 45, is the lead investigator for Paranormal Ghost Investigations. He uses equipment like infrared cameras, digital audio recorders, an electromagnetic-field reader and special lighting to gather evidence of the supernatural.

A recent outing at the Odd Fellows Lodge in downtown Lemoore resulted in an infrared photograph of a ghost sitting at a piano and a spooky electronic voice phenomenon.

"I believe there's something there," Frees said. "I've seen enough to where I go, ‘Wow.' Then, on the other hand, you try to be rational, like, ‘Is this really happening? Is this really going on? Is this what we're seeing and feeling and hearing?' It's pretty interesting stuff."

Frees said his earliest encounters with the supernatural may date back to his childhood.

"When I was like 5 years old, we lived in a house where I'd wake up in the middle of the night and there would be these shadows staring at me, around me," he said. "I could hear them talking almost like in tongues, I guess you would say. After we moved out of that house, I never had any real experiences after that."

That is, until about three years ago, when he was helping one of the owners of The Bastille with some renovations to the former downtown Hanford club. Despite warnings that the building might be haunted, Frees agreed to work late into the night.

Frees said the two were working on some lights on the dance floor. When they finished with one of the fixtures, he unplugged it and wrapped up the power cord.

Frees said they left the building shortly after and he refused to help out after hours ever again.

But the incident rekindled his interest in the unknown for the first time since he was a child.

Not long after, while on a return trip from San Diego, Frees decided to pay a visit to the abandoned Linda Vista Hospital in Los Angeles. He said the investigation turned up some strange findings, including voices and the sound of a little girl singing down the hall.

Since then, he has investigated other spooky locations, including three outings to Wolfe Manor in Clovis, which has been featured on TV shows like "Ghost Hunters" and "Ghost Adventures." Thousands of people are rumored to have died in the former sanitarium. Like most haunted locations, Frees said, a lot of information is based on word of mouth rather than actual evidence.

"That's what I'm looking for," he said. "I want the hard-core evidence where it's indisputable."

During Frees' first two investigations of Wolfe Manor, he was not permitted inside the building. That didn't stop him from capturing electronic voice phenomena, photos of orbs - floating circles he said can be spirits trying to manifest, or just dust particles - and what appears to be a female ghost with a child.

"You can see that she has a hole in her head," Frees said. "I don't know if it's a lobotomy or if it's a gunshot wound. And then her hands go down and she's holding hands with a little child ghost. It's kind of eerie."

Frees brought his fiancee on his most recent investigation of Wolfe Manor.

"She's kind of skeptical," he said. "She went to Linda Vista, but she didn't feel or see anything. This time, we went out there and she started asking questions. All of a sudden, it went from 96 degrees in the house down to 65 degrees at the snap of a finger. We all felt it at the same time. And then it went back to 96 degrees about 20 seconds later."

He said sudden chills are a common indicator of a supernatural presence.

It was only later, when Frees reviewed the audio recordings, that he could hear a whispered "Yes" when his fiancee asked, "Do you want to be my friend, Mary?"

So far, he said, his hobby has been a great way to dispel his childhood fears. But that doesn't mean he wouldn't call it quits if he came across a very persuasive apparition.

"It might come to that point where I go, ‘I think I just crossed the line,'" he said. "If I uncover something that just like jumps in my face - like some kind of a demonic form - I might just throw in the towel and say, ‘Hey, does anybody want to buy some equipment?'"

Frees said he expects his squadron to be deployed sometime in the next few weeks and hopes to search out the supernatural in other parts of the world. He's already researched some international haunts in case he happens to make a port stop in Hong Kong or Singapore.