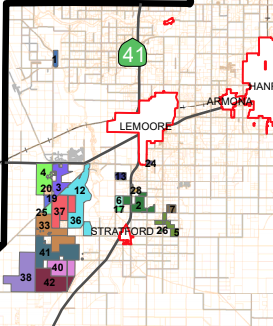 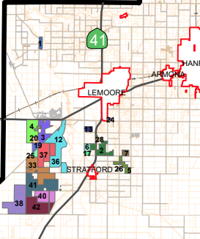 A solid "Wall to Wall" of solar farms will cover miles south of NAS Lemoore between Avenal Cutoff and Hwy 41.

A solid "Wall to Wall" of solar farms will cover miles south of NAS Lemoore between Avenal Cutoff and Hwy 41.

This month the Kings County Planning Commission approved three huge but modified solar projects that will sprawl over the westside of the county, flanking Highway 41 and the Avenal Cutoff — all part of the huge Westlands Solar Park project.

Westlands Solar Park (WSP) is a master-planned solar complex covering 21,000 acres in west-central Kings County — that featureless landscape that looks like it was an ancient lakebed — because it was. The developers are covering this flat land with a sea of solar panels that will soon stretch ‘wall to wall’ along both sides of the Avenal Cutoff for miles between NAS Lemoore and I-5.

The 2018 Westlands Solar Park master plan calls for a total of 12 solar power generating facilities to be developed in a period of 12 years. The installed capacity of each solar farm near the Fresno/Kings county lines is planned to be up to 250MW.

Already, six of the 12 projects have, or are in the process of being permitted- clustered near each other connected to the grid by a new tie-in line (Gates Gen-Tie).

The 250MW WSP project called Aquamarine is expected to go on line this fall.

Westlands Grape Solar — a 250 megawatt alternating current solar farm that includes construction of an electrical substation and a large battery energy storage facility. Located on the northside of Nevada Avenue, the new solar farm is planned to be constructed over a 14-month period, starting in mid-2022, with completion scheduled for mid-2023. The facility will include approximately 250 battery storage units, larger than other WSP projects in the past.

Hanford Gourmet: The comfort soup that is needed in this time of grief and gratitude

The other two projects are already approved but are increasing the number of battery storage units as the state calls for more of the units to spread the impact of solar generation to the grid into the evening hours.

2. Westlands Chestnut Solar — The applicant is proposing to amend a previously approved Conditional Use Permit to allow for an increase in the area covered by battery storage units from approximately 2 acres to 6 acres and a central microwave communication tower up to 175 feet tall. The number of battery storage units will go from 44 to 150. The site is 24998 Nevada Avenue.

3. Westlands Blue Solar -The applicant is proposing to amend a previously approved Conditional use Permit and increase the permitted battery storage units from 84 units to 250 units covering 9 acres instead of 3 acres. The location is 25959 Laurel Avenue, Lemoore.

The Westlands Aquamarine project will sell 50MW to Valley Clean Energy Alliance, which executed a contract with WSP in early 2020. Valley Clean Energy is a locally-governed electricity provider for the California cities of Davis, Woodland, Winters and unincorporated portions of Yolo County.

“We believe Westlands Solar Park is ideally positioned to be a leader in California’s program to reduce the state’s carbon footprint and meet its Renewable Portfolio Standards targets. With Aquamarine advancing to full operation before year-end, we are realizing our vision for Westlands Solar Park to become a major clean energy provider as well as meeting a significant commitment in our company’s ongoing sustainability program,” said Avi Shemesh, co-founder and principal, CIM Group. “With Aquamarine and the future phases of Westlands Solar Park, we also are bringing clean energy jobs to the region and generating revenue for the local government and area businesses.

“With the imminent completion of Aquamarine, we are in active discussions with numerous entities to supply the clean energy that is critical to meeting the short- and long-term goals for renewable energy — vital to improving communities,” Shemesh said.

WSP has the capacity to grow to more than 2,700 MW of renewable energy at full buildout and the potential to provide clean energy to more than 1,200,000 homes.

Unlike other California areas targeted for solar like the Mojave desert, this tainted farmland in Kings County remains short on water and unusable for agriculture due to excess salt pollution. The big project has no opposition and has been even promoted by environmental groups for use of solar farms. The developer says they are "repurposing selenium-contaminated and drainage impaired farmland for the development of clean energy at WSP.”

Still to come are at least two more WSP projects with names like Westlands Almond and Westlands Pomegranate.