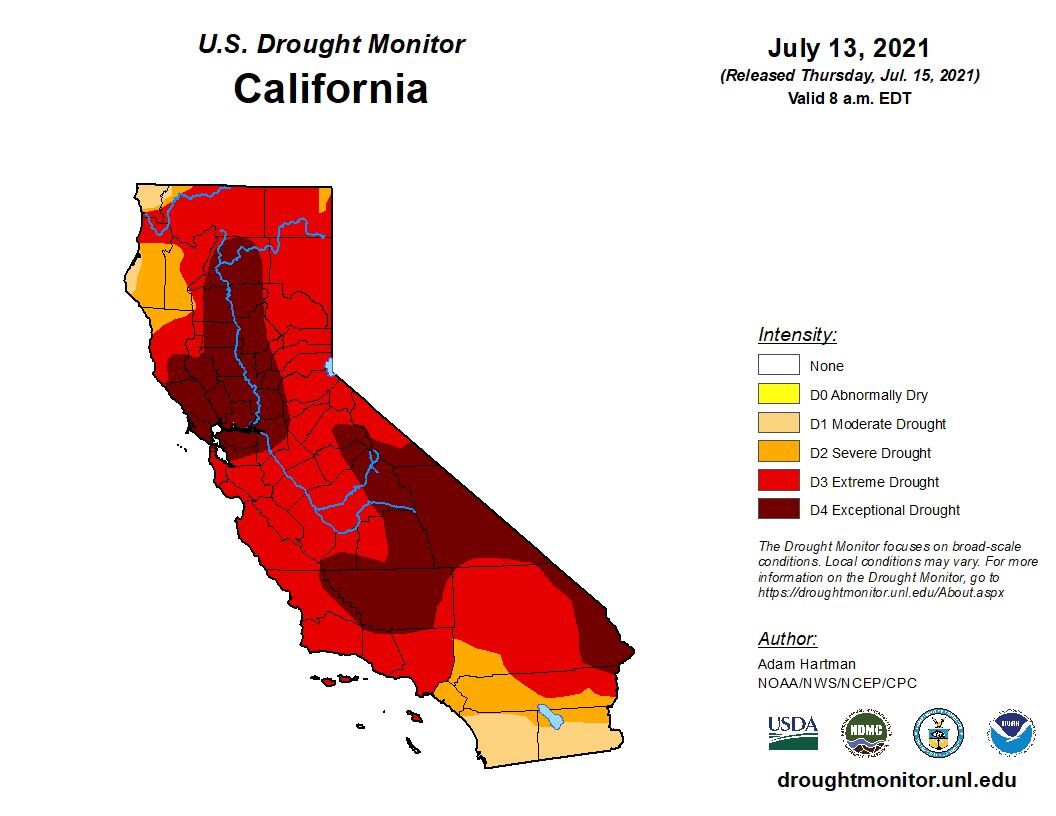 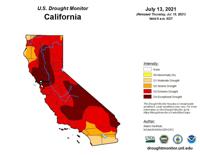 Meteorologist Cindy Bean of NWS Hanford says it is part of a giant high pressure system that has stubbornly blanketed much of the West Coast and even up into Canada."It's very unusual" she says. ”The good news is that it has weakened a bit and temperatures this week are more typical” at 102 to 104, Bean adds.

That heat blanket is also helping to fuel 70 wildfires in the Western US this week.

The extreme heat is forcing farmers to irrigate their trees more often even as they watch their irrigation canals suck up more of the little surface water being brought in.

Kaweah River flows are at a 20-year low, says SCE who is struggling to make electricity at their hydroelectric plant on the river. The river flow at Pumpkin Hollow is below 20cfs with water temps a toasty 90 degrees. By way of comparison, river flows on the Kaweah were as high as 1800cfs in July 2019, a good water year.

Irrigation districts below the dam are managing what is left, bringing in small amounts to their farm customers but the flows into dry channels are causing channel loss that is “off the charts” says Mark Larsen of Kaweah Delta Conservation District.

The upshot is the farmer who buys a set amount of water to be delivered to their farm, ends up with a fraction of what they ordered. If there is some good news it is that the parched aquifer is getting the water. Larsen says the “drought is being magnified 100 times”over the scale of complications all over the state that are impacting other regions.Various state and federal government agencies are struggling to balance irrigation, fish and urban interests due to the drought that has hit the usually wet north part of the state too.

We're not alone. Lake Mead, on the mighty Colorado, has never been this empty.

NOAA says more than 94% of the West is in drought, the largest area on record. More than 60% of the region is in ‘extreme’ or ‘exceptional’ drought the two most severe categories — expanding by 35,000 square miles, or roughly the size of the state of Indiana. The latest Drought Monitor map for July 15 shows many parts of the state in”exceptional drought” — in dark red.

When Tulare Irrigation District (TID) tried to run 1500af dam water to the TID boundary 14 miles away this summer, they lost an estimated 80% of that to seepage.Normally channel losses are 30% anyway.

Besides channel seepage, water bodies are losing more water into thin air as evaporation rates are higher than usual in this heat.

TID will get no Kaweah River nor any Friant-Kern Canal water this year. The upshot, says GM Aaron Fakuda, ”It will be business as usual” for TID farmers who will rely on pumping from the groundwater. The district hopes to sink wet-year surpluses when those years come.

The much larger Pine Flat Dam on the Kings has some 243,000af in a dam that holds 1 million acre-feet — much larger than Lake Kaweah, but only a quarter full.

What’s happening on the Friant Kern Canal? Spokesman Johnny Amaral says staff is still acting under the guidance they have a 20% allocation from the Bureau and some districts are now taking their water out of the canal.

Still Friant has posted that they expect some water from the Friant dam may have to be sent to the Exchange Contractors this year — down the river.

Amaral says the Friant Canal subsidence fix is making progress with the new construction contract set to be awarded in a matter of weeks. Actual construction is expected to start this fall and wind up in 2024. Now we know the state along with the feds will kick in money for the fix that includes a parallel canal.

The canal has literally sunk due to over pumping of the aquifer along over 30 miles near Porterville.The same thing has happened up and down the Central Valley where canals run.

On Monday, July 12, Governor Gavin Newsom signed a bill that provides $100 million in initial budget funding toward restoring the capacity of the Friant-Kern Canal and the other major canals named in Senate Bill (SB) 559.

The Friant-Kern Canal Middle Reach Capacity Correction Project’s estimated cost is more than $500 million, and the cost to restore the canal’s full design capacity is estimated as $924 million. The Friant-Kern Canal’s middle reach has lost 60% of its capacity to convey water, resulting in as much as 300,000 acre-feet of water going undelivered by the canal in some years

Meanwhile the brutal heat and lack of water is not being made any better by the fact that permanent plantings in the Tulare Lake Basin continue to climb 4 or more percent each year. Unlike some crops that can be idled in a water crisis, trees and vines need to be irrigated or they will turn into fire wood.

USDA reports there were at least 8.6 million almond trees sold by California nurseries from June 1, 2019 to May 31, 2020.Not just replacement trees either — about 55% of the total trees sold (36,000 acres) were for new almond orchard acres.

In Tulare County the annual crop reports tell the story. Trees and vine acreage in 2013 covered 361,000 acres in the county. By 2019 that figure jumped to 484,408 acres — climbing about 70,00 acres in one year. Farmers planted more almonds, pistachios and tangerines that continue to mature and year by year — more are harvested. In 1982 Tulare County had under 1,000 acres of pistachios. Today, that number is over 71,000 acres.

To make up for the drought, farmers say that they have reduced the amount of water needed to grow each almond by 33 percent between the 1990s and 2010s and stand committed to another 20 percent by 2025.Likewise for dairy farmer who says they have reduced water use by 88% in the past fifty years. Local daries use their wastewater to grow field corn needed to feed the animals.

But not only surface water is dwindling, the main go-to source — groundwater — is being found at lower depths year after year. The magnitude of the overdraft in KDWCD districts including portions of Kings County ranges from 60,900 to 75,100 acre-feet per year.

The heat is also shriveling many crop yields this summer from cherries, to lemons, processing tomatoes to milk production. Almond production this year will be off 10%, largely due to the drought.

USDA said July 12, ”The 2021 almond crop started off with very dry weather in February, providing excellent bloom conditions and plenty of opportunity for pollination. A lack of rainfall continued through the spring and brought about concern for water availability. Due to low water allocations and record high temperatures in June, the crop did not develop as well as expected. Some growers have decided to save their trees by stripping nuts before harvest.”

With the whole state suffering from a shortfall, one can expect more finger pointing at the farm sector’s water use vs other sectors.

Some economists point to water marketing, allowing farmers who have access to low-cost water to sell that water to other farmers willing to pay more.