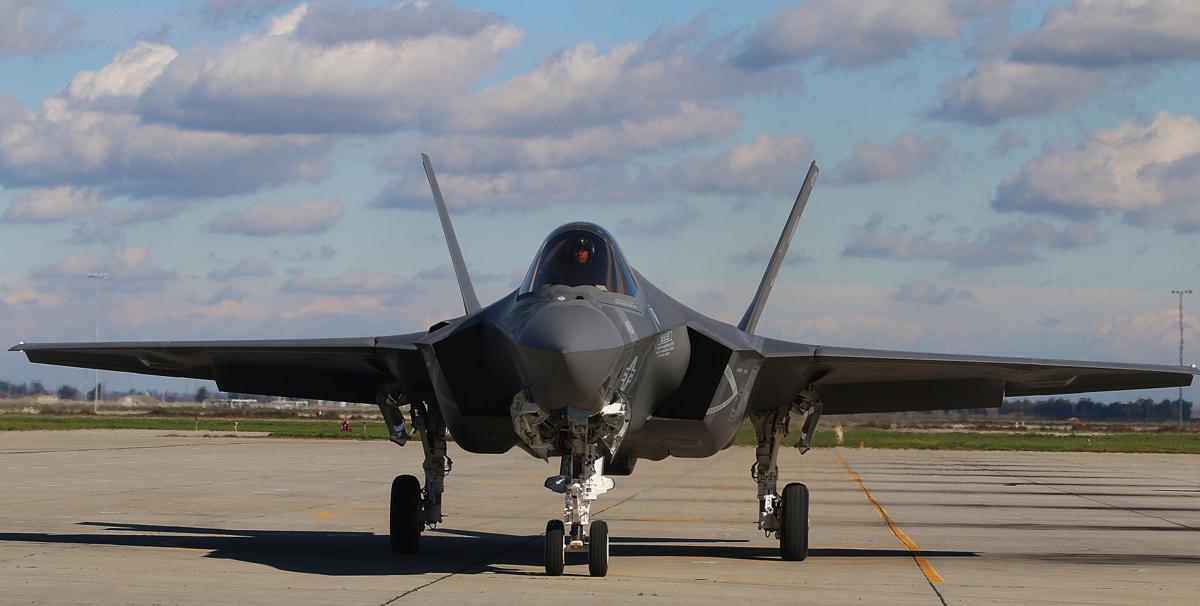 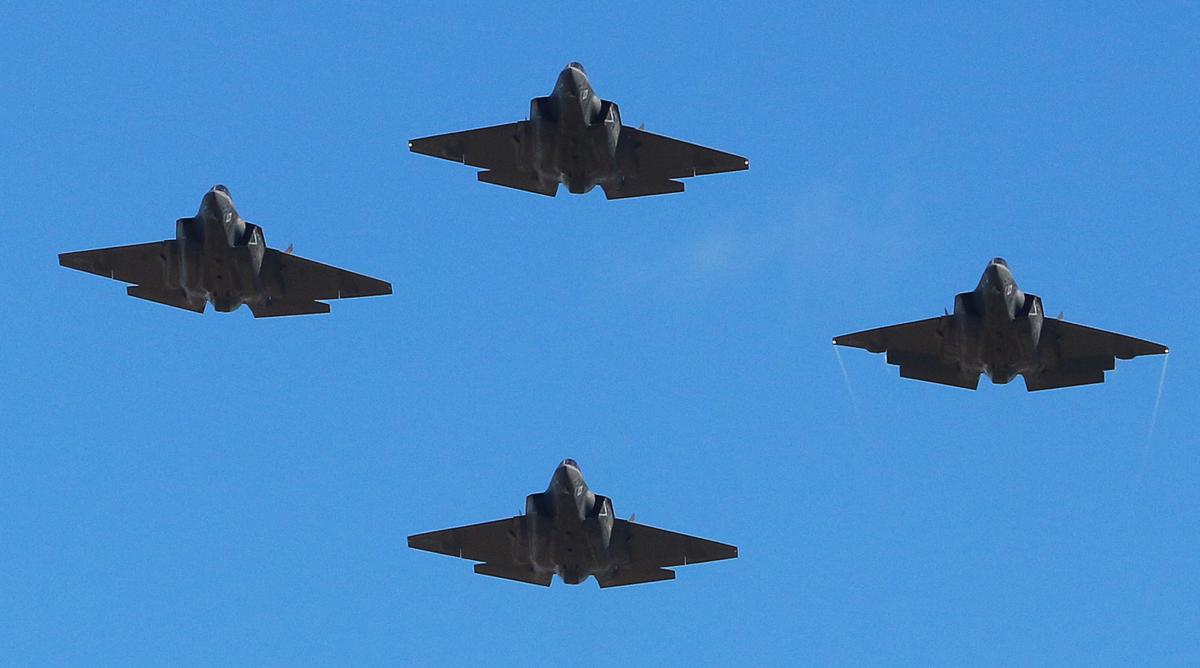 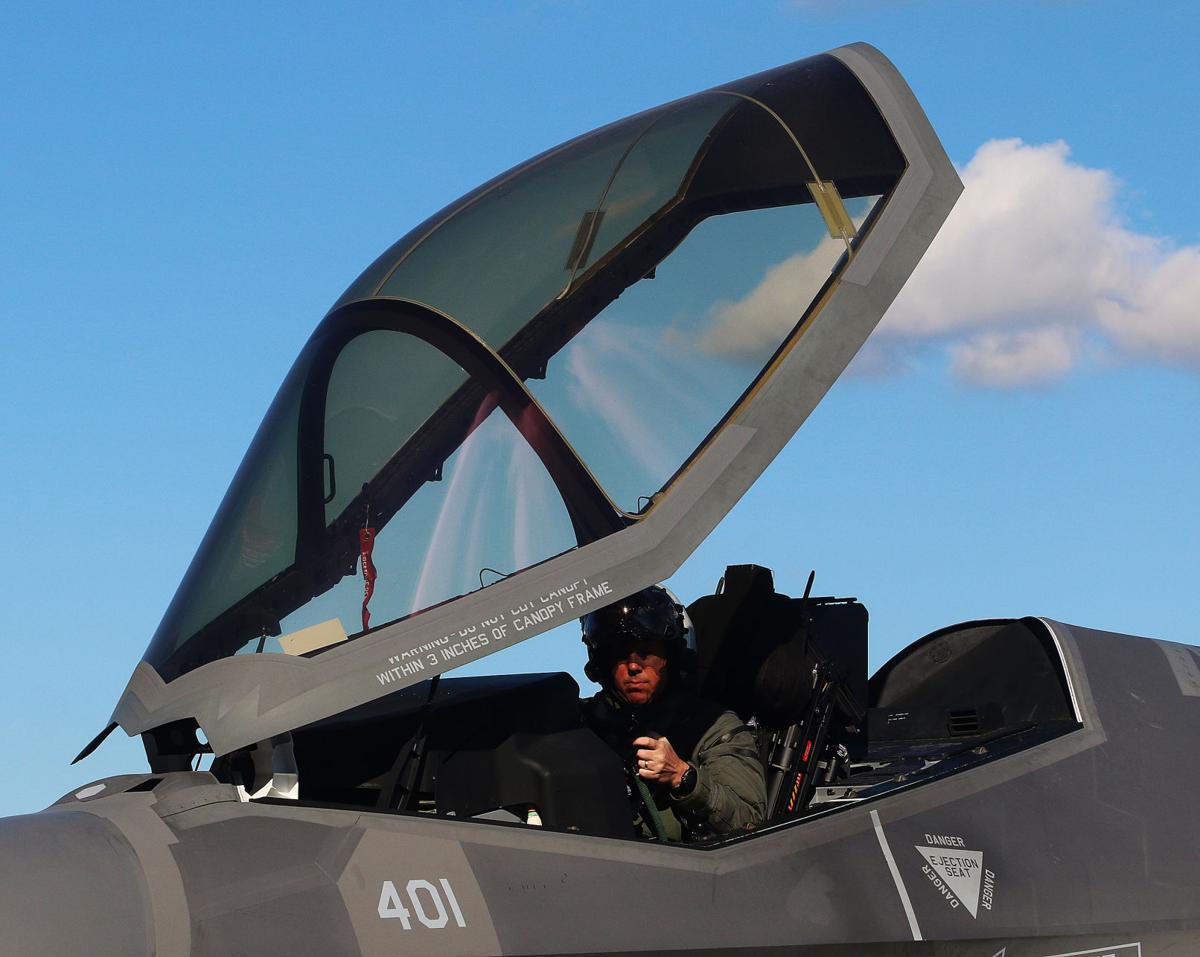 Commander John Turner readies to exit his plane after arriving at NASL with the first squadron of F-35C Lightning II jets on Wednesday afternoon. 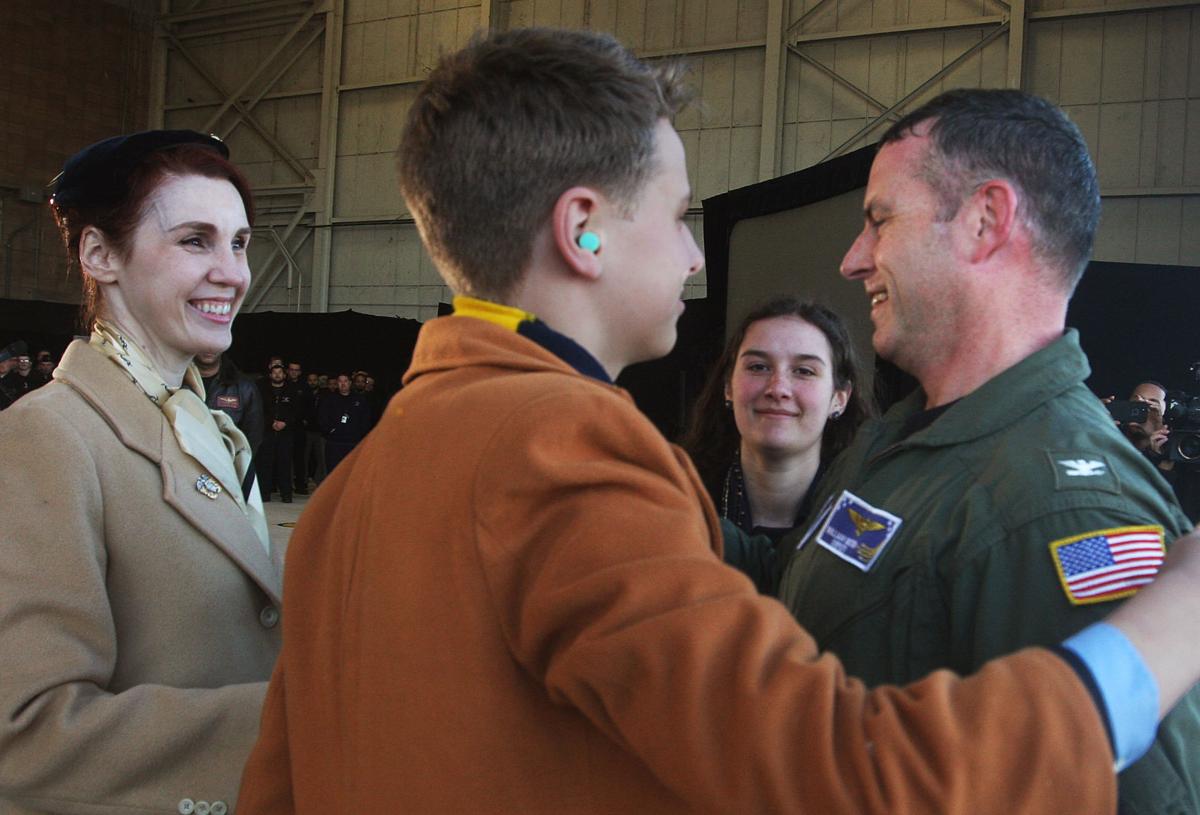 Captain William Gotten is welcomed home by his wife, Jennifer, daughter, Claire, and son, Trey, after arriving with the first F-35C Lightning II jets at NASL on Wednesday afternoon.

Commander John Turner readies to exit his plane after arriving at NASL with the first squadron of F-35C Lightning II jets on Wednesday afternoon.

Captain William Gotten is welcomed home by his wife, Jennifer, daughter, Claire, and son, Trey, after arriving with the first F-35C Lightning II jets at NASL on Wednesday afternoon.

NAVAL AIR STATION LEMOORE — The wait for the F-35C Lightning II aircraft came to a close Wednesday with the arrival of four of the new high-tech jets at Naval Air Station Lemoore.

Hundreds of people watched in awe as the jets roared onto the tarmac for the arrival ceremony. Capt. Markus Gudmundson, commander of Strike Fighter Wing Pacific, said Wednesday’s ceremony marks the culmination of years of planning and hard work.

“It is also the beginning,” Gudmundson said. “I want to stress that this is not the end. It’s too early to spike the football. This is the beginning of the progress we’ve yet to achieve.”

The Navy selected NASL in 2014 to serve as the West Coast home base for the new jets. The selection process, which spanned more than three years, also considered Naval Air Facility El Centro. One hundred of the state-of-the-art aircraft will replace the aging Pacific fleet of F/A-18 Hornet aircraft. That will include one 30-jet training squadron and seven 10-jet fleet squadrons.

The transition is expected to be completed by 2028.

Kings County Supervisor Craig Pedersen said the new aircraft and infrastructure to support them will ensure the Navy's continued presence as a major economic player in Kings County. The new jets are expected to bring more than 2,300 people, including personnel and their families, to the base over the next decade.

“The real story here is the commitment the Navy has made to the community and the facility itself,” Pedersen said.

Lt. Bryce Holden said he has been stationed at NASL flying F/A-18 Hornets for the past six years. He is now one of six pilots with the newly reformed Strike Fighter Squadron VFA-125 who is trained to fly the F-35C. Holden said the squadron is in the process of training sailors and air crew to support the new jets.

“We were all trained at VFA-101 in Eglin Air Force Base [Florida], which is the East Coast F-35 training squadron,” Holden said. “That training course takes anywhere from five to seven months.”

Holden said VFA-125 had previously served as the West Coast training squadron for the F/A-18 Hornet aircraft until 2010, when it was deactivated and merged with VFA-122. With Wednesday's arrival of the new jets, Holden said, it will allow pilots to begin training for the aircraft in Lemoore.

The F-35C is a single-engine, single-pilot supersonic aircraft that introduces low-observable stealth capabilities to the Navy fleet. Pilots can monitor a wide array of information on the visor of their helmets, including airspeed, altitude, targeting information and a 360-degree view around the aircraft.

“There's some things about an airplane that are always going to be the same,” Holden said. “As far as how it handles, it flies like a fighter. While it’s different from an F-18, it is still a fighter and it handles the way you’d expect a fighter aircraft to handle.”

Vice Adm. Mike Shoemaker called Wednesday a “historic day” for naval aviation. Shoemaker said the F-35C incorporates stealth technology and onboard sensors that collect a wealth of data from its surroundings and sends it back to supporting forces.

“It really is a historic day for NAS Lemoore and our local community partners that have been so supportive of naval aviation’s presence here in the Central Valley,” Shoemaker said.

It'll be interesting to see how the military uses planes like these in the next few months. Everybody is sensing that a lot of world alliances are going to switch right now and while the market looks like things are improving with the latest initiatives coming from the white house, I don't think everything is going to go that smoothly in days to come...