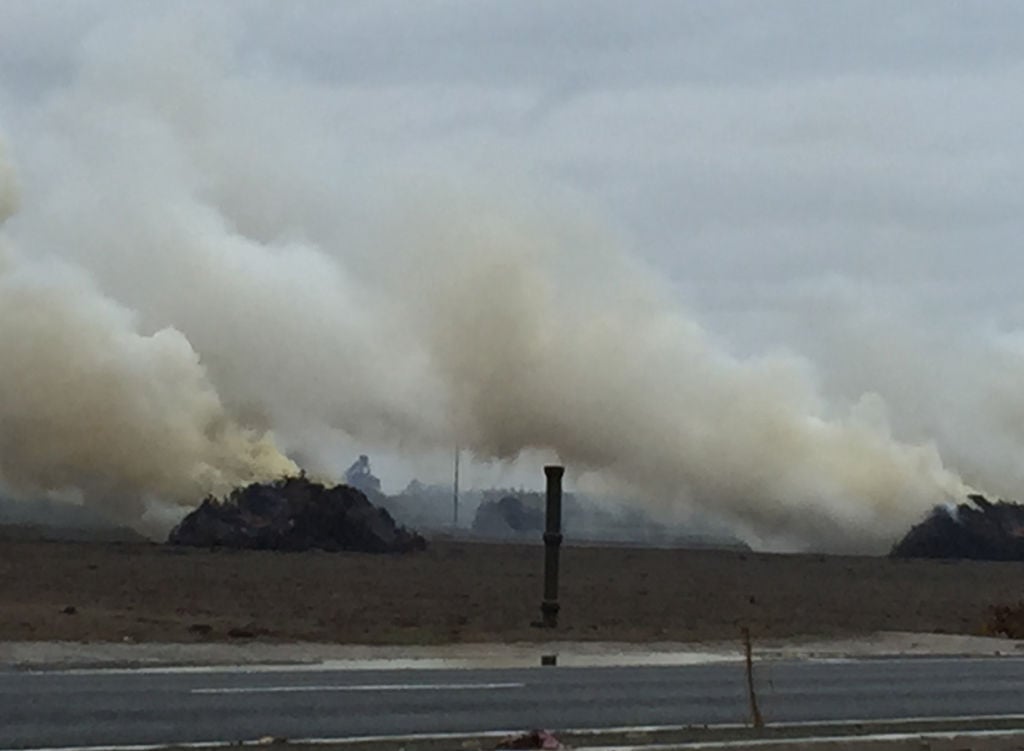 Orchard removal waste burns in Fresno County after a biomass power plant in Mendota that normally receives the waste shut down last year. Such open field burning, which contributes to air pollution, is generally prohibited.

The Delano biomass facility that receives agricultural waste from Kings and other counties may shut down unless proposed legislation, AB 590, gets passed. 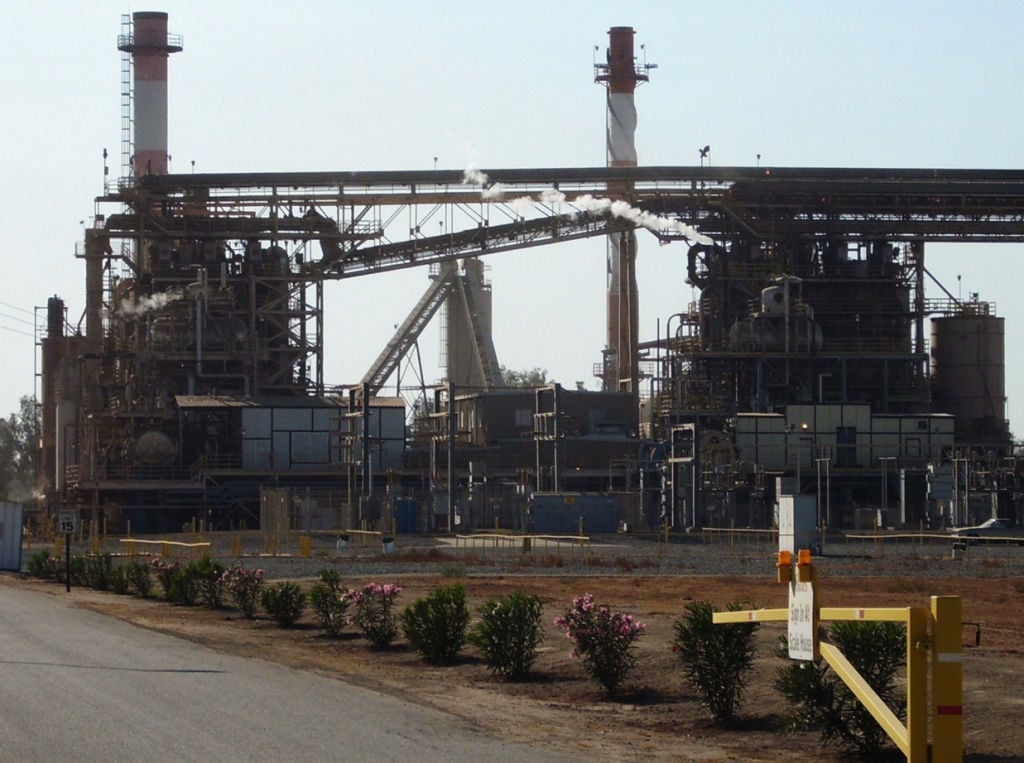 The Delano biomass facility that receives agricultural waste from Kings and other counties could shut down unless proposed legislation, AB 590, gets passed. 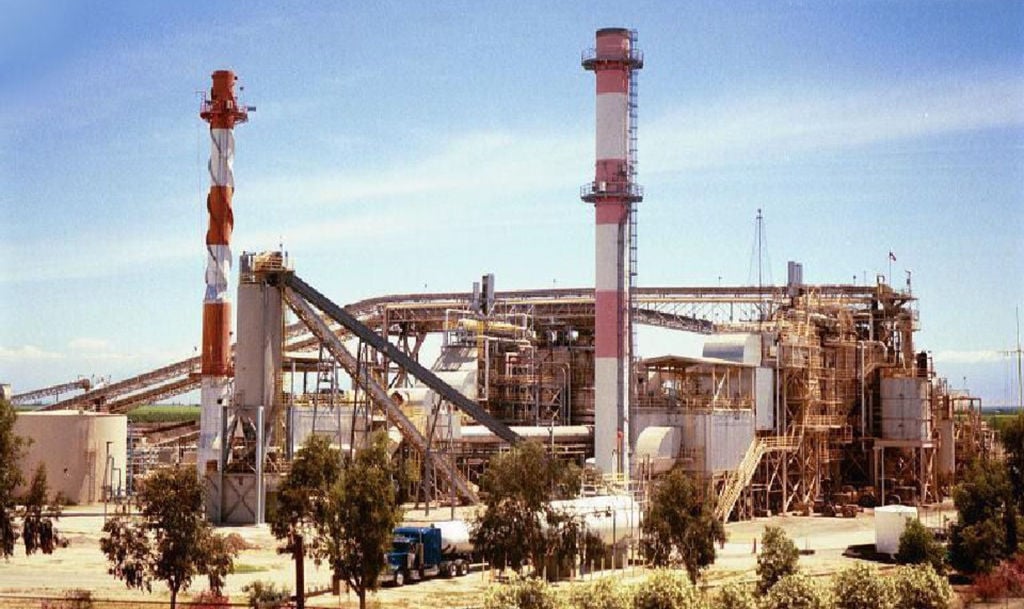 Once upon a time, local orchard farmers taking out trees piled them up in large heaps and struck a match, sending huge plumes of smoke into the air.

But now that the whole biomass industry in California is threatened with extinction, the issue has become a hot topic in the ag industry.

Growers are asking: If you can’t burn orchard trees that have been removed, and you’ve got no biomass plant to send them to, where does it all go?

“They just pile up,” said Dino Giacomazzi, Kings County Farm Bureau president. “Currently, biomass plants are about the only way we have to dispose of orchard removal.”

About 10,000 tons of Kings County orchard waste went to a facility in Mendota annually before it closed last year, according to Matt Barnes, a spokesman for Covanta, a company that owns the Mendota facility, one in Delano and three other plants in California.

Barnes said that about 1,500 tons of Kings County waste has gone to the Delano facility so far in 2015. That’s the only facility Covanta is still operating in California.

When biomass plants hit their heyday in the 1970s and 1980s, there were more than 50 in the state. But as natural gas has gotten cheaper and subsidized wind and solar energy have become widely available, utilities have less incentive to purchase the more expensive power that biomass facilities provide.

So the plants have been closing down, one at a time, as contracts expire and utilities choose not to renew.

There are only about 20 operational plants left, according to Barnes.

“The issue is, there’s this whole ecosystem of the biomass plants,” he said. “It’s not just that the [electricity generation] goes away. Do we go back to open burning?”

In the early 2000s, the San Joaquin Valley Air Pollution Control District started cracking down on open burning – a strategy that dovetailed nicely with the biomass plants, because now growers could send their waste there.

Those plants, like other emissions sources, are regulated by the district. According to Barnes, they remove 90 percent to 95 percent of the pollution open burning would release into the air.

The air district determined that the removal of orchard waste to biomass plants was an economically and technologically feasible alternative to burning.

“If we were to lose a substantial amount of our biomass capacity, we would need to find other alternative uses,” said Tom Jordan, a senior policy advisor at the air district.

Jordan said there are some experimental alternatives, such as converting the waste into biogas, but they aren’t commercially available on a wide scale.

Sending the waste to landfills is not considered feasible because of the large volume involved.

“To haul it to the landfill, we’re going to fill it up in about three minutes,” said Harley Phillips, manager of Wilson Ag, a Shafter-based company that offers tree removal service.

The issue may take on greater urgency with drought. Nut crops – and the year-round water demand they generate – have exploded in Kings County acreage in the last decade. More orchards are expected to be removed as some farmers find they can’t afford to pay rising water costs.

“That’s going to be an unfortunate reality of the persistence of this drought,” said Assemblyman Rudy Salas, D-Bakersfield.

Salas said he’s signing on as a joint author of AB 590, a measure introduced in the Assembly last month by Assemblyman Brian Dahle, R-Redding. It would funnel cap-and-trade revenue into subsidies for the plants, likely bringing some of the recently closed facilities back online.

The bill has farm bureau support. The air district hasn’t officially signed on yet, but Jordan said district officials agree in principle with the concept.

In its current form, the bill doesn’t include a dollar amount that would be set aside to support biomass facilities.

Salas said a monetary figure will be going into the bill’s language soon. It’s currently being considered by the natural resources committee and the utilities and commerce committee in the Assembly.

“The alternative is gathering up millions of tons of orchards and burning them,” Salas said.

Orchard removal waste burns in Fresno County after a biomass power plant in Mendota that normally receives the waste shut down last year. Such open field burning, which contributes to air pollution, is generally prohibited.

The Delano biomass facility that receives agricultural waste from Kings and other counties may shut down unless proposed legislation, AB 590, gets passed.

The Delano biomass facility that receives agricultural waste from Kings and other counties could shut down unless proposed legislation, AB 590, gets passed.