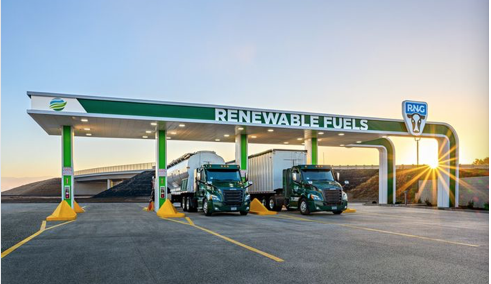 Biogas from local dairy farms is being pumped into the tanks of feed trucks from Western Milling, based in both Hanford and Goshen, that return to the dairy to bring feed.

Biogas from local dairy farms is being pumped into the tanks of feed trucks from Western Milling, based in both Hanford and Goshen, that return to the dairy to bring feed.

This week, the Tulare County Board of Supervisors heard a report on progress in cutting dairy cow and cattle emissions that cause particulate pollution and generate greenhouse gases.

Kings County’s neighbor, Tulare County is monitoring their dairies in an annual report being done under a settlement with environmental groups in 2019.

Through 2019, the report says emissions are down 16% from 2013 as a result of a smaller animal herd, management efforts and installation of technology that is capturing manure-based gases. Co2-based emissions were 6.3 metric tons which was 16% less than tonnage measured in 2013. It is also 16% of the tonnage reduction target for 2023 under the state Climate Action Plan.

Not yet measured are the expected benefits to CDFA’s investment that matches dairies funding to install digesters at an impressive number of Tulare County dairies that by the latest count number 55 digesters at 52 dairies as of April 13, 2021. CDFA has contributed more than $80 million out of a total cost of $236 million for these projects. As of now, just 15 digesters are operational and 36 are under construction.

The report notes that once the fifty-five Digesters are all operating for ten years, the Greenhouse Gas (GHG) reductions will total 9.5 million metric tons- about 700,000 metric tons reduction per year or 82% of the 2023 goal.

The county’s dairies are producing more milk with fewer animals. In 2013 the number of animal units was 741 thousand compared to 707 thousand in 2019.

Capturing methane at digesters allows it to be piped to a central station and cleaned up to become renewable natural gas for transportation.

The same trends are underway in Kings County.

California is the nation’s biggest dairy-producing state with Tulare and Kings among the top-producing counties.The industry is trying to reduce its overall greenhouse gases by 40 percent by 2030 and 80 percent by 2050. A 2016 law set in motion the current progress with the state offering help to make it happen.

Critics of the programs say the state is propping up large dairies instead of promoting smaller, more sustainable operations.

Others suggest giving up milk and meat.

Biogas from local dairy farms is being pumped into the tanks of feed trucks from Western Milling, based in both Hanford and Goshen, that return to the dairy to bring feed. Late last year, Western Milling opened their Clean Natural Gas station serving customers as well as fueling 33 company-owned trucks.The station is located right off Highway 99 at the Betty Drive interchange. The company says “Our new trucks are fueled with renewable natural gas that can virtually eliminate smog-forming pollutants and reduce greenhouse gas emissions linked to climate change.” Western Mining offers a employee stock-ownership plan.The company plans to have a CNG truck fleet of over 40 trucks by mid-2021-75% of the total fleet. As more dairy digesters open. Western Milling says they will “continue to source renewable natural gas from their local dairy partners” says founder Kevin Kruse.

Are feed costs pushing up milk prices? The two seem to be rising in tandem.

May corn price hit a seven-year high at $7.40 per bushel- up more than $1.75 this month. The U.S. has exported huge volumes of corn and there is no sign of a slowdown. Brazil’s corn crop is said to be withering with little rain forecast. Corn is the key ingredient in dairy cow feed.

This past week spot nonfat dry milk (NDM) jumped 7.25ȼ to $1.325- the highest spot value since October 2014. The US has a good supply and much of the rest the world does not. Visalia’s California Dairies Inc (CDI) sports the largest milk powder plant in the US.

According to Beacon Economics, California’s tree nut exporters have been seeing impressive gains. California is the nation’s top farm exporter, and almonds, pistachios, and walnuts number among the state’s top five agricultural exports (dairy products and wines are the other two). Foreign shipments of almonds in the current crop year (dating back to last fall) are at the highest level ever. Other than an unusually high spike in exports in 2019, pistachio exporters are likewise enjoying their best year to date, while walnut exports are at their highest level since the pre-tariff war era in 2017.

Nonpareil continued to be the leading variety based on bearing acreage, followed by Monterey, Butte, Carmel and Padre.

Fresno, Kern, Stanislaus, Merced and Madera were the leading counties. These five counties accounted for 73% of the total bearing acreage.

With cherry harvest beginning in the San Joaquin Valley, marketers say they expect a large crop of high quality — and that people who pick and pack cherries will be protected against the pandemic, says California Farm Bureau. The California Cherry Board says farmers and packers have worked to vaccinate their employees, and that safeguards inaugurated last season remain in place. The California cherry harvest is said to be starting earlier than in the past and will continue through mid-June.

As the California harvest season gains momentum, transportation companies worry there may not be enough truck drivers to move crops to market. People in the trucking and food businesses report they’re already short of drivers to haul carrots and onions from Southern California fields. They say the shortages could worsen as harvests move north. Driver shortages have been a chronic problem that firms say has been amplified by the pandemic, says CFB.

Politico reports that the Farm Workforce Modernization Act, supported by California agriculture is still undergoing negotiations in the Senate after passing the House in March but Republicans are firm that they do not support the House version of the bill and are working to make changes.Sen. Mike Crapo, R-Idaho, has stepped forward to lead negotiations with Sen. Michael Bennet, D-Colo., on a Senate companion bill to the FWMA. They will need the support of at least 10 GOP Senators to pass.

Cows produce loads of methane. Methane can not be removed from soil and water like carbon emissions can!