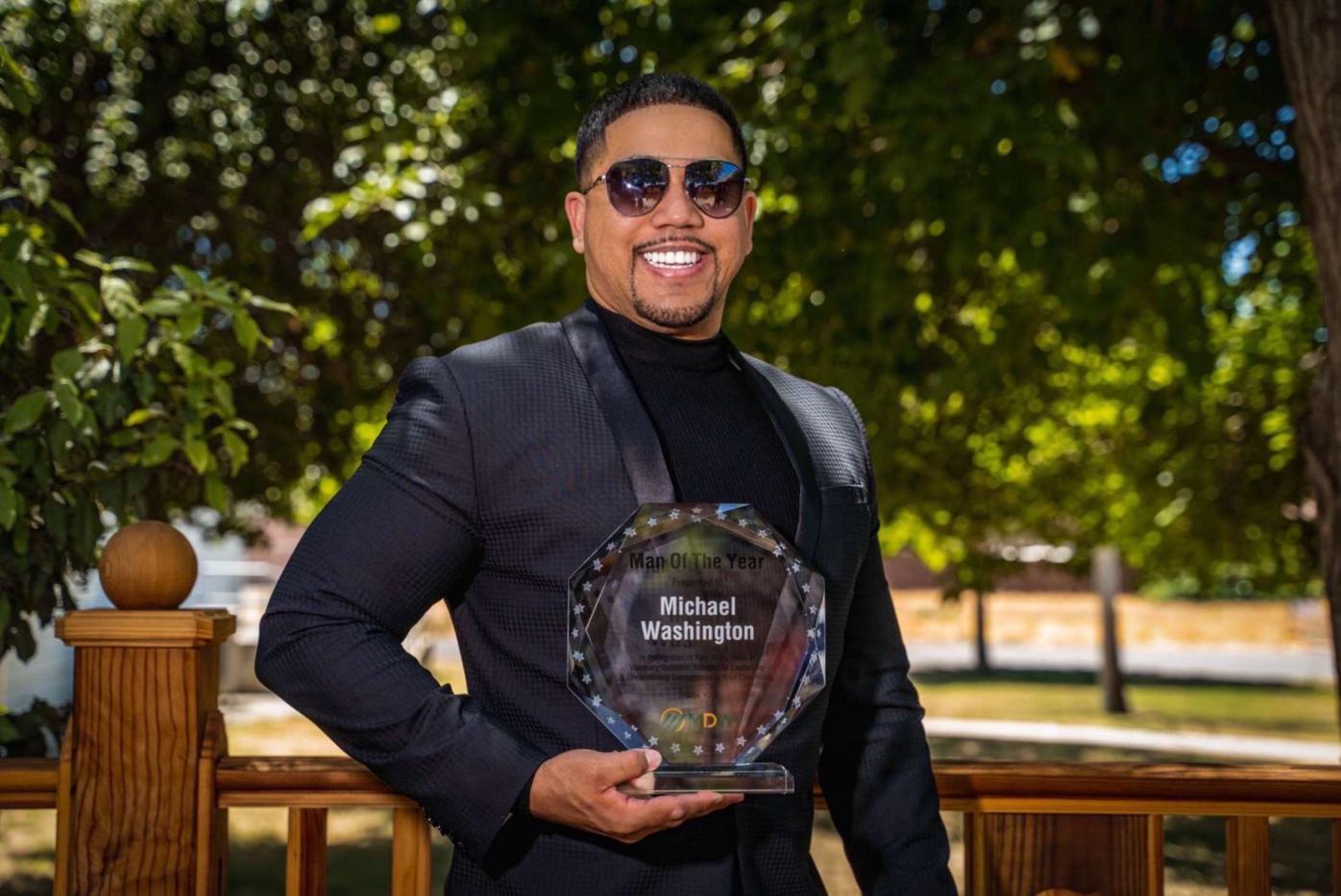 Michael Washington was named Man of the Year in July for his "exceptional leadership" in his community. Washington has used his company, MDW Credit Solutions, to help many with financial literacy. 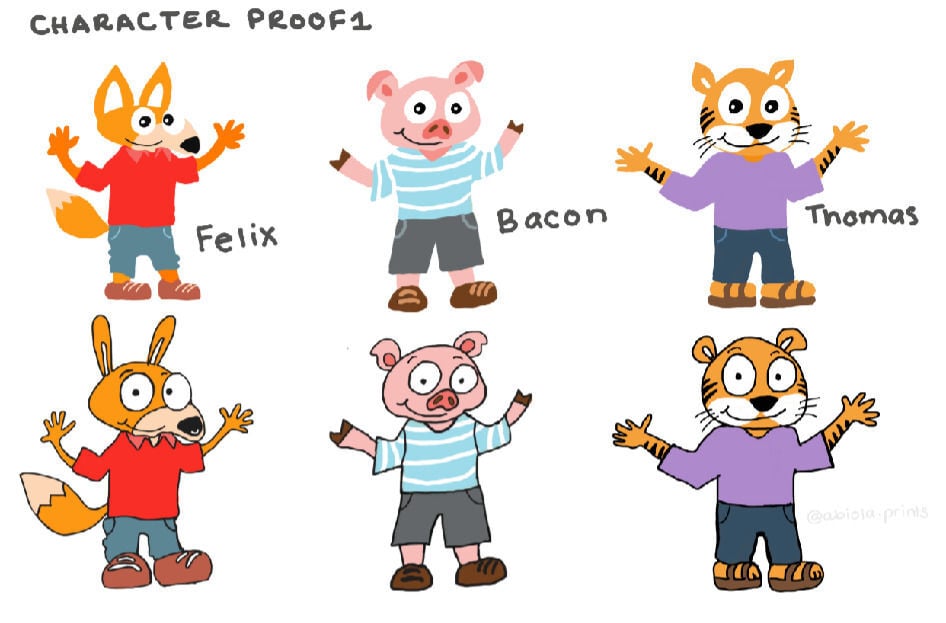 Michael Washington has written a book titled "Felix Gets a Credit Card" which teaches young children about the importance of credit and what it is. Pictured are illustrations for the book which be released in late August.

Michael Washington was named Man of the Year in July for his "exceptional leadership" in his community. Washington has used his company, MDW Credit Solutions, to help many with financial literacy.

Michael Washington has written a book titled "Felix Gets a Credit Card" which teaches young children about the importance of credit and what it is. Pictured are illustrations for the book which be released in late August.

HANFORD — Looking in from the outside, Michael Washington just wants to help others, but when observed under a magnifying glass, a deeper side to his story is quickly revealed.

From growing up in a lower class family to struggling in school, Washington has been through a lot in his life. His success story is unique and awe-inspiring, and one that hasn’t gone without recognition.

The 34-year-old was presented the Man of the Year award in July by Dr. Crystal Jackson, president of the Kings County NAACP Branch 1039.

The award says, “In recognition of your many years of visionary guidance, exceptional leadership and unconditional commitment to your community.”

“I would say that it’s humbling,” Washington said about receiving the award. “I would say that it carries a big honor, but to whom much is given, much is required, much responsibility as well. I feel like I’ve been somebody for the community who’s been consistent, somebody who’s tried to lead us in these dark times.”

Washington’s uplifting tool of navigation has been his company MDW Credit Solutions. It’s part of his MDW Financial Group, which will also soon include MDW Mortgage Lending.

MDW Credit Solutions, which stands for Washington’s full name, Michael Devert Washington, opened on Jan. 1 of this year. In the short seven months since, Washington has done everything in his power to educate others about financial literacy.

“I put people in their dream houses by fixing their credit,” Washington said. “I show people that they too can have whatever it is that they want and believe in. I show them their worth, teaching them how to get ahead and break the cycle at the same time.”

Washington said it means to world to him for people to trust him and his vision. He tries to show his clients that they can and are deserving of getting more in their life.

“My reward is knowing that I changed somebody’s life by getting them a house or fixing their credit, getting them a car or even just showing them like, ‘Look man, you’re cut out for this life as well. You can win too,’” Washington said.

His next step is open MDW Mortgage Lending, which is a direct result of MDW Credit Solutions. He said 90% of his clients joined his program because they wanted to buy a house, so he wants to be able to guide them in their next step as well.

MDW Mortgage Lending is currently looking to launch in November or Jan. 1, 2021 at the latest.

Even with the work he’s done and the people he’s helped through his business, his biggest thing isn’t MDW Credit Solutions or the future of MDW Mortgage Lending, it’s Breaking the Cycle, a nonprofit organization designed to teach financial literacy.

The idea is to implement early education of financial literacy in children’s homes between the ages of 12-14. Financial literacy, which is rarely taught in schools, gives people the ability to understand financial planning and management skills, manage debt, and understand other items like interest rates.

Coming in September or October, Breaking the Cycle will start offering and webinars. Although the focus is on children, there will also be workshops available for adults to learn about the importance of what credit is and how to maintain it.

He’s even written a book as another option to teach children about financial literacy. The book, titled “Felix Gets a Credit Card,” focuses on teaching children the do’s and don’ts about having credit.

The story, geared towards ages 10-14, focuses on fox named Felix and the what happens when his parent leave him with a credit card for a day.

“He’s headed to the mall and they tell him to buy what he needs not what he wants,” Washington said. “Felix buys the latest Nintendo games, candy, action figures and pizza.”

His parents are upset when gets home, but Felix eventually realizes what he did was wrong and learns the various lessons about having a credit card. The book’s illustrations are currently being done and it will be launching by Halloween.

But Breaking the Cycle doesn’t end there. Washington is also planning on putting together a Big Brothers Big Sisters type of program together.

“We’re trying to be an impact on children’s lives until they’re adults and throughout,” Washington said. “We want to be an active person in these kids’ lives.”

If the children are texting, Washington wants to text them and be in contact. If they have a game of some sort, he wants to be there for them. The idea is to give the child a solid male or female individual in their life to help them do better in school and in life.

It’s a cause near and dear to his heart, especially after the things he went through as a child. Washington was raised in Lemoore solely by his mother, after his father passed away when he was young, and grew up seeing struggles.

“I come from a lower class family and growing up you’re surrounded by a bunch of lower class families,” Washington said. “So you see everybody struggling whether it’s minorities like ourselves, people who were raised by single mothers or single fathers, so as I got older, I realized the families that are doing good, they usually have both parents in their household.”

He attended Lemoore High School for his freshman and sophomore years and Kings Christian School his final two years.

During his time in school, Washington said he was “a terrible student.” His GPA was low, he missed school and was unable to pay basketball at Lemoore because of his failing grades.

But one day, Washington had his whole world change with a single phone call. He was a junior at Kings Christian and preparing for a basketball tournament. His mom called him.

He asked what was going on and his mother told said she was going to prison.

“As a young kid, you’re sad,” Washington said. “I start crying. I cried for a few minutes then I accept what it is.”

Now with no mother or father at the age of 16, he had to grow up fast.

Washington ended up turning his life around in high school. He made up a lot of classes his junior year and then graduated with a 3.3 GPA his senior year.

“It doesn’t matter where you start, it matters where you finish,” he said.

And as fate would have it, on the day of this interview with the Hanford Sentinel — Wednesday, July 28 — Washington received a call from his mother that she was being released from prison. He picked her up in Dublin, California on Wednesday.

Despite the success, the tough journey is not something Washington wants other children to go through. He wants them to succeed and prosper from the beginning, and have an equal chance at success.

So when Washington speaks, it’s not from a given platform, but one he’s created through hard work and determination.

All he wants to do is help, so he’ll keep on helping.

“I know I can’t help everyone in the world, but if I help enough people, they can enough people and so on,” Washington said.

“My reward is knowing that I changed somebody’s life …” Michael Washington said.