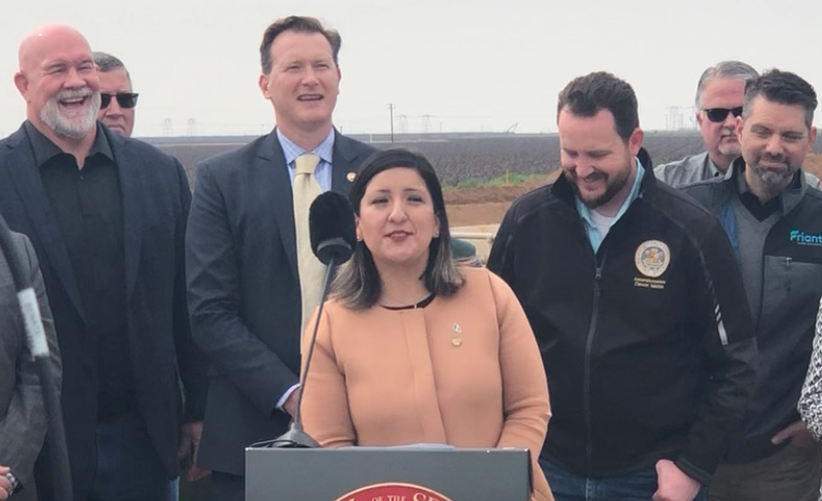 Senator Melissa Hurtado (D-Sanger), along with other principal co-authors, announced the introduction of Senate Bill 559 in Porterville in this 2019 file photo. The bipartisan legislation would secure California’s water supply by investing $400 million in general funds towards the Friant-Kern Canal. Gov. Gavin Newsom recently vetoed the bill.

County planner Chuck Kinney says the county has received a preliminary application to build a 500MW solar farm in the county’s southwest corner that would straddle the Kern/Kings line. The application is from a Korean-based company with offices in LA called Pelican Jaw. The company is affiliated with Samsung, a firm that has built several solar farms in Tulare County’s westside.

The sprawling project would join 3,260 acres in Kern County and 2,127 acres in Kings. Kinney says the site is just east of I-5 and 6 miles from Utica Ave. The big project also includes battery storage like most new solar developments recently. At 500MW it would be Kings' largest solar project. It is not affiliated with Westlands Solar Park who is building several big projects close to the Fresno county line near the Avenal Cutoff.

Lemoore continues to attract more home building projects. The nation’s top builder - DR Horton plans a 51-unit subdivision called Victory Village. The development is coming by summer 2021 says the company’s website with homes located at Bush Drive and Production Avenue, just to the north of West Hills.The project is being heard by the city Planning Commission. The builder touts its close proximity to NAS Lemoore.

No. 2 builder Lennar is already in town and working on a large new subdivision also next to the West Hills College.

Also, a staff report says the city has received a request for a lot line adjustment on 3 parcels west of Highway 41 and south of Bush the would mean 150 more acres would be developed in this area, likely for homes. The lot line adjustment was submitted by Zumwalt Hansen & Associates on behalf of Sandridge Partners, Semas Farming and Mardell Pedersen, and Patrick Vincent Ricchiuti will be processed administratively and will not be reviewed by the Planning Commission.

Already the Assemi Group submitted an application package for the 825 home Lacey Ranch subdivision proposed northeast of Glendale Avenue and 18th Avenue on the north side town. An EIR is in progress.

Kings Community Action Organization (KCAO)- the federally-designated anti-poverty agency for Kings Count, operates a community food bank. They are applying to the City of Lemoore to ink a long term lease for portions of the Cinnamon Muni Complex. KCAO wants space for food warehousing and delivery to the residents of Lemoore. The non-profit proposes to lease 12,420 square feet of building space in the Complex for food bank storage and delivery to low and very-low income families, along with sharing 1,000 square feet of loading dock space.They would pay $12,000 annually for and will pay in advance for ten years ($120,000) as well as be responsible for any utilities, maintenance or damage related to their activities.

California Governor Gavin Newsom vetoed a bill that would have provided partial funding to fix the subsidence-plagued Friant-Kern Canal. State Sen. Melissa Hurtado (D-Sanger) introduced a bill back in 2018 and it had strong bipartisan support.

The project is struggling to cobble together enough money to repair an estimated 60% decrease in capacity due to vigorous water pumping in recent years that has sunk land along the route. The Hurtado bill would have provided about 35% of the total cost to do the repairs. But Newsom says he favors an approach to address water projects statewide and not just one.

The federal government may pay up to half the estimated $500 million cost and Friant is urging water users in southern Tulare County to pay over $200 million as a share of the cost since they arguably contributed to the damage. Friant has vowed to begin the project in early 2021.

Trump’s Bureau of Reclamation faces off with Westlands in court

The Trump administration’s Bureau of Reclamation often sides with Westlands Water District on water supply issues. But not this time as they urge a federal court to reject a multimillion-dollar claim over water rights. On the docket is a decades long case brought by farmers claiming that the Bureau of Reclamation failed to build a drainage system in Westlands.

Farmers have argued the feds inaction amounts to an unconstitutional taking of their property. In its recent filing, however, the Bureau accuses the farmers of engaging in "linguistic obfuscation" to try to recharacterize what Reclamation has — and hasn't — done.

The agency’s actions are closely watched in part because former Westlands lobbyist, David L. Bernhardt is now the Secretary of the U.S. Department of the Interior who oversees the Bureau.

Steve Bettencourt, loving husband, father, and grandfather, passed away on Tuesday, February 16, 2021 at the age of 67.

The following is taken from the Kings County Sheriff’s office media report. Those appearing as “arrested” have only been arrested on suspicion…

David R. Snell, 72, of Lemoore passed away February 9th in Scottsdale AZ. Dave is survived by his wife Barbara of 40 years; his children Frank…

No injuries in shooting stemming from verbal argument

Upon arrival, officers learned that two groups of subjects were in a verbal argument.

Senator Melissa Hurtado (D-Sanger), along with other principal co-authors, announced the introduction of Senate Bill 559 in Porterville in this 2019 file photo. The bipartisan legislation would secure California’s water supply by investing $400 million in general funds towards the Friant-Kern Canal. Gov. Gavin Newsom recently vetoed the bill.