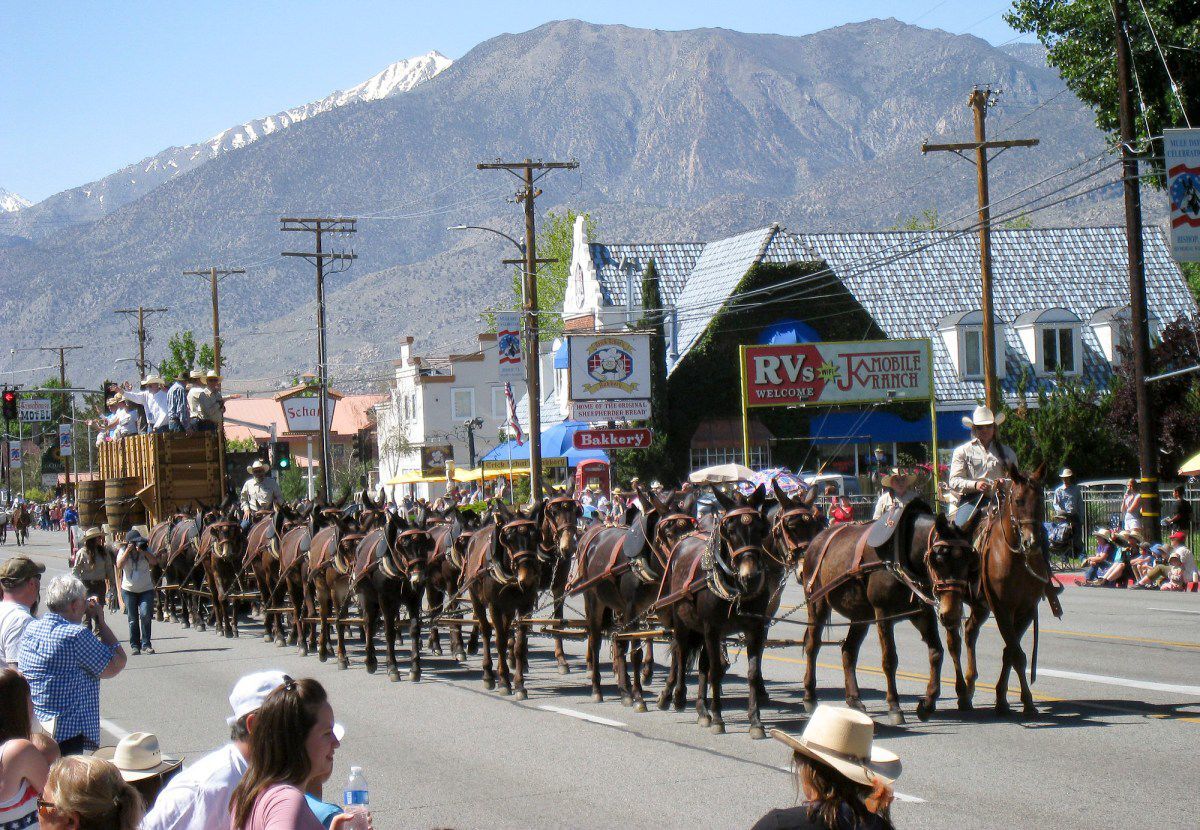 A mule team makes its way down North Main Street during the 2017 Mule Days parade in Bishop. 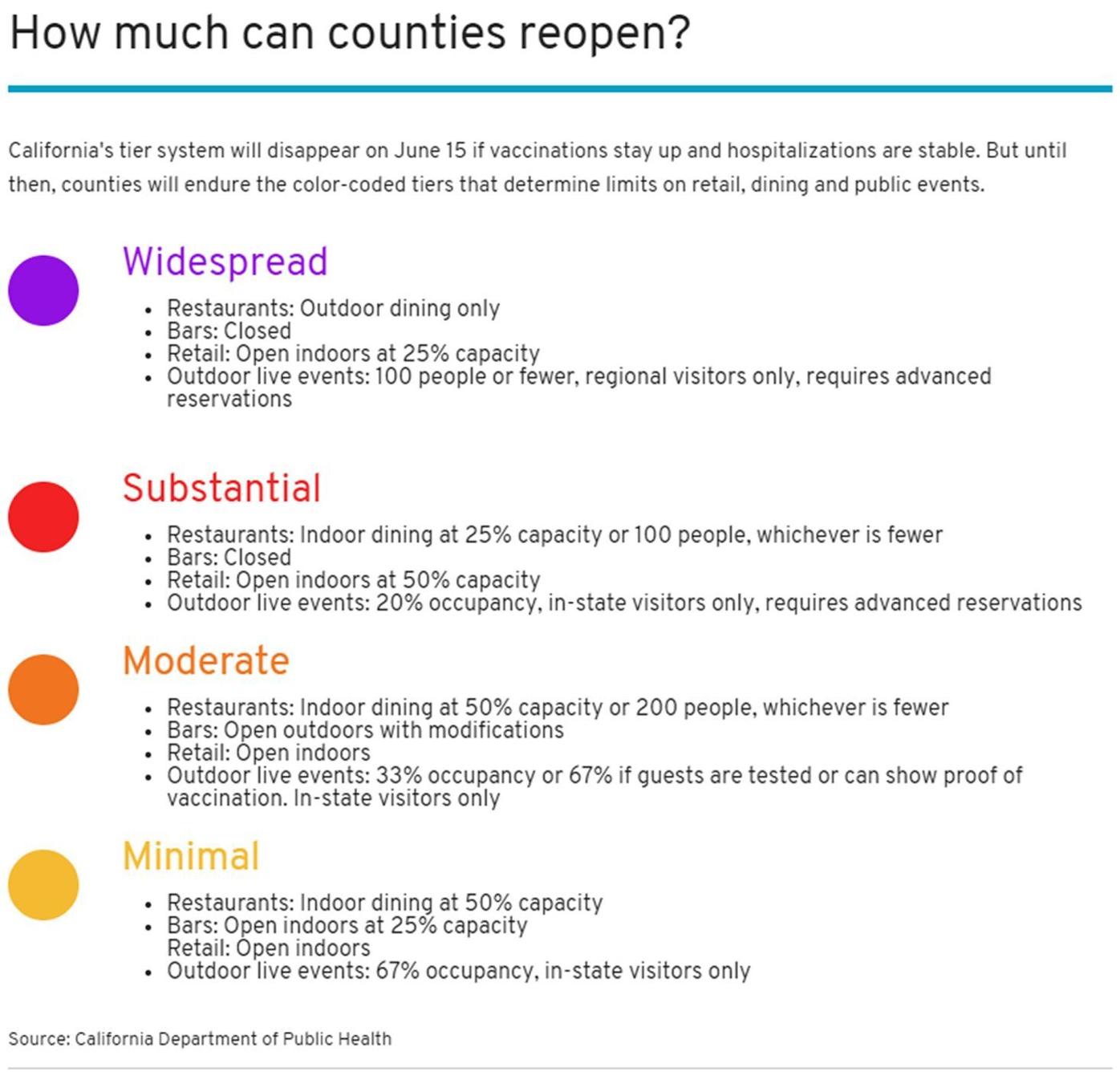 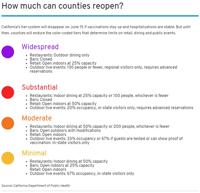 This image, provided by Cal Matters, shows information on the COVID-19 tier system.

A mule team makes its way down North Main Street during the 2017 Mule Days parade in Bishop.

This image, provided by Cal Matters, shows information on the COVID-19 tier system.

Every year, tens of thousands of equine aficionados gather in the streets of Bishop for one of the biggest events in the Eastern Sierra: Mule Days.

Touting “the world’s longest mule parade,” as well as an array of riding competitions and other festivities, the multi-day event leading up to Memorial Day brings Inyo County a surge of millions of tourism dollars.

Last year’s event — which would have been Bishop’s 51st — was cancelled as COVID-19 forced widespread shutdowns. And now this year’s quirky celebration, billed as “a world-class equestrian event promoting the legacy, heritage and talents of the mule,” is at risk, too.

Inyo County is one of only two California counties that remain in the state’s most restrictive tier for reopening — the daunting purple. That means strict limitations on live events and retail, as well as no open bars or indoor dining, which would all put a damper on next month’s Mule Days.

Whether the region will move forward with Mule Days, which attracts 30,000 visitors and more than 700 mules, or which activities it can schedule remains up in the air. There likely will be no indoor activities or the usual concert, barbecues and dances.

The extent and size of Mule Days could depend on whether Inyo County can lower its infection rate and move down two or three tiers to orange or yellow, allowing more spectators.

“This is a huge deal for our community,” said Tawni Thomson, executive director of the Bishop Chamber of Commerce. The question now is: “Do they (event organizers) spend the money in planning not knowing what’s going to happen six weeks from now?”

Merced is the only other county left in the purple tier. California’s 56 other counties have all moved to red, orange or even yellow, which have far fewer restrictions on businesses.

California’s intricate, colored tier system has frustrated many local officials. Merced County supervisors are concerned data lags will hold them back. In Inyo, a county with about 18,000 people, officials say the tiered system isn’t really designed for less populous counties, making it harder for them to move forward.

Inyo County could move into the red tier on Tuesday, but that still carries strict rules for businesses and live events. Moving to lighter tiers could happen no sooner than May 4 for the orange tier (which requires fewer than six cases per 100,000 people); for yellow, it would be May 25 — opening day of Mule Days.

Meanwhile, Merced County’s adjusted case rate as of Tuesday was 11.7 cases per 100,000 people, likely meaning it will be stuck at least two more weeks in purple.

Earlier this week, Gov. Gavin Newsom and state health officials announced that if vaccine supply holds up and cases and hospitalizations remain stable, California will chuck its colored tier system and reopen statewide on June 15. State officials will continue to track local data and will intervene if numbers surge.

But at least for the next two months, limits on restaurants, shopping and events will continue to be determined by the state’s blueprint of colored tiers.

Bishop, the biggest town in Inyo, is trying to make its case with the state, asking health officials to re-examine the criteria for small counties moving to less-restrictive tiers.

The state already has an alternative framework for counties with fewer than 106,000 residents, recognizing that a very small number of cases can easily swing counties back to stricter tiers. But that workaround only protects small counties from moving back a tier too easily; it doesn’t help them move forward, said Bishop Mayor Stephen Muchovej.

Because of its smaller population, for Inyo County to move out of purple, it needs 12 or fewer new COVID-19 cases a week. It’s been close — two weeks ago the county had 13 new cases, bumping up its case rate for the following week’s tiering, so the clock had to reset.

Once Inyo does make it to the red tier, it can tally up to 35 new cases per week before having to move back to purple, according to the small county framework.

Merced County is one of two counties still stuck in the purple tier and facing the most severe business restrictions. Photo by Andrew Kuhn, The Merced Sun-Star

Larger Merced County has been stuck in purple for 20 weeks now, while all of its neighbors have moved forward. County supervisors were expecting to get closer to the red tier this week, but were surprised to see their case rate remained well in purple territory.

Merced County’s public health department did not answer CalMatters’ questions about the county’s status, but a spokesperson for the California Department of Public Health said state health officials are working with Merced to identify its drivers of transmission.

“At this point in the COVID response, vaccinating individuals residing in the most disadvantaged communities while staying vigilant and continue with masking and sector specific restrictions remains crucial,” an email from a state health official said.

One Merced County supervisor said he feels they have been doing all of that and more.

“We’re doing the right things. There’s an effort to get vaccines out, we’re doing clinics to get our agricultural workers vaccinated, and we continue to test people,” said County Supervisor Scott Silveira.

Counties with more than 106,000 people get credit for testing and vaccinating people in low-income ZIP codes.

Merced may continue to struggle to improve its numbers. One pending concern is a recent “data dump” that could affect next week’s outcome.

Tier assignments have a week lag, meaning this week’s status is based on data from the week of March 21. The county’s case tracker shows that on April 3, the county tallied 164 cases, significantly above the usual number of cases the county has been seeing on any given day. Silveira said the lag in data from test providers means cases that should have been spread across several days, and possibly weeks, are now lumped into one day.

“That’s going to skew our numbers,” Silveira said. The county, he said, is addressing this issue with the state.

“It’s been very frustrating, the formula is not that simple,” he said.

Silveira represents the west side of Merced County. It’s typical for his constituents to travel or commute into San Jose and other parts of the Bay Area, so they are able to do more activities in Santa Clara County, which drives business away from Merced.

Merced County is home to wineries, an air museum and other businesses that have been hurting during the shutdown.

The tier restrictions also are harming the economies of small Eastern Sierra towns that rely on tourism. Mammoth Lakes is a popular recreation destination, and Death Valley attracted more than 1.7 million people in 2019, although about half that number visited last year. These visitors often drive through Bishop and other small Inyo County towns, but business owners are not allowed to accommodate them like they’re used to.

Desperate, some business owners have defied state rules and continued operating indoors or at larger capacities, said Thomson, the head of Bishop’s Chamber of Commerce.

“But that pits them against their neighbors who are following the rules, and sadly it’s dividing our community,” she said. “We are very much looking forward to June 15.”