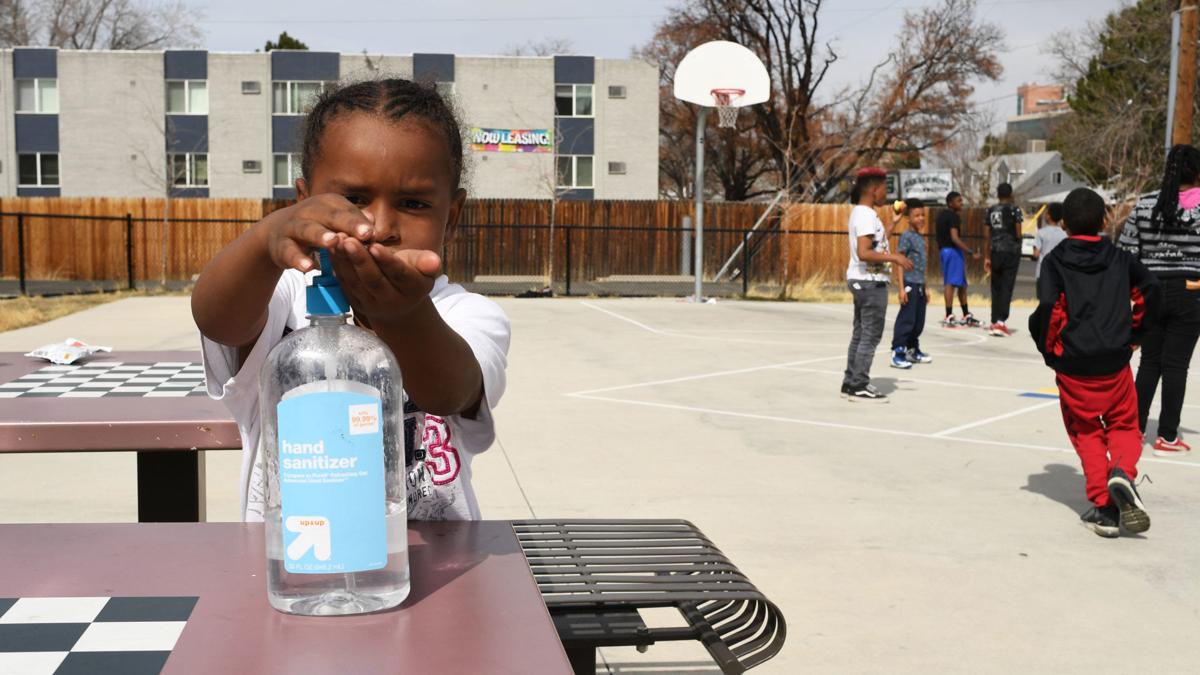 AURORA, COLORADO - MARCH 18: Four-year-old Messiah Guyton puts on hand sanitizer before eating his snack provided by Hoffman Library, part of Aurora Public Library, as he and other children from the neighborhood play outside the library on March 18, 2020 in Aurora, Colorado. The children had no school due to the COVID-19 crisis. (Photo by RJ Sangosti/MediaNews Group/The via Getty Images) 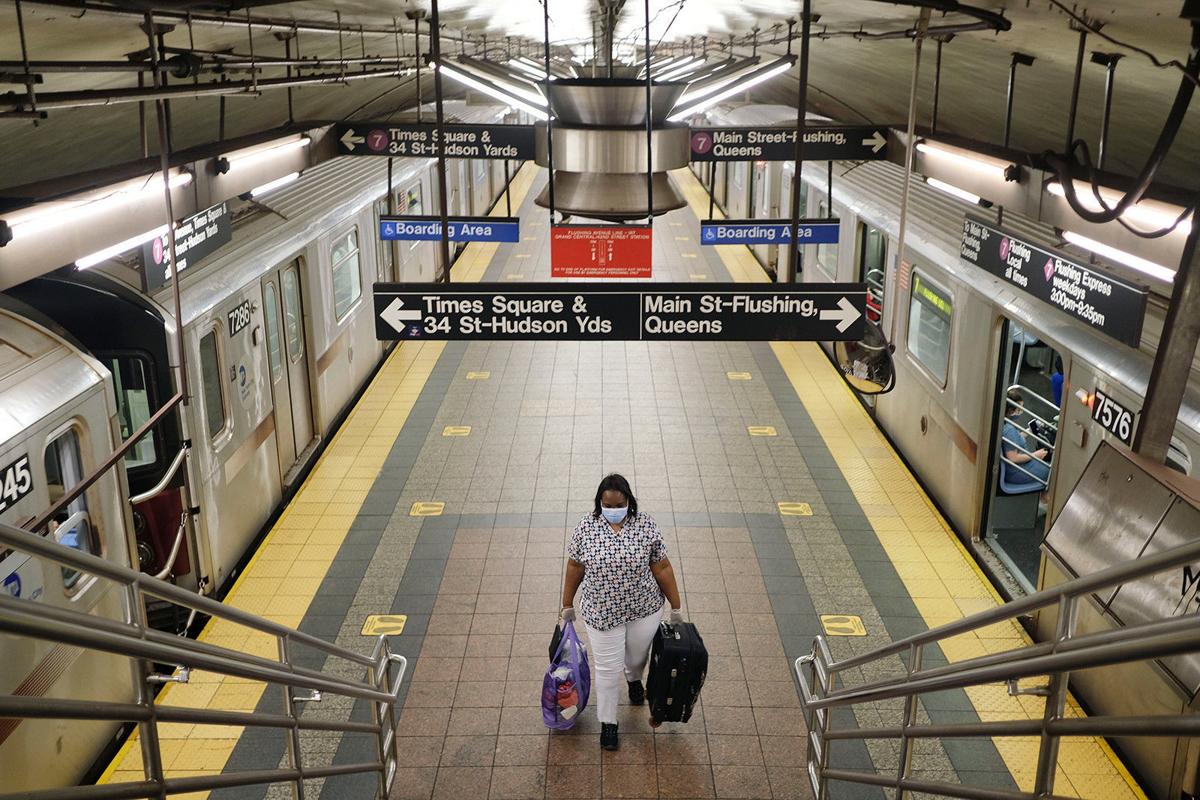 A commuters walks on a nearly empty subway platform in New York, Monday, June 8, 2020. New York City is reopening a limited range of industries on Monday.

At least 28 states are not following US Centers for Disease Control and Prevention guidelines on reporting new Covid-19 cases -- half of which saw the trend of new cases increasing in the last week.

Those states are not reporting probable cases, according to the daily case count listed on the CDC's website. Probable cases include those that show evidence of an infection without the confirmation of a lab test and cases where coronavirus was listed as a cause or contributing cause of death but are not confirmed with a lab test.

Some of the states with the largest populations -- like California, Florida, New York and Texas -- are among those listed as not reporting probable cases, despite CDC guidance that they should be included in the case count.

This comes as 26 states see an increased or steady rate of new cases. Accurate rates of new cases are among the metrics that help officials track how the disease is spreading in the US and make decisions about how to reopen and loosen restrictions put in place to mitigate its impact.

More than 1.9 million Americans have been infected, and more than 111,000 have died in just over four months, according to data from Johns Hopkins University.

Though coronavirus reporting guidelines are voluntary, states not reporting probable cases likely undercount the number of people infected and make it difficult for officials to get the true picture of where the nation stands in the midst of a pandemic that has rocked almost every aspect of life.

How will students go back to school?

Schools have been especially upended, with students across the country not having been on campus in months.

While many local governments have expressed that the path forward for the fall is unclear, North Carolina and California have released guidelines for reopening schools.

Though California's 1,000 school districts will make their own decision about how and when to resume in-classroom learning, the state's Department of Education released a 62-page guidebook Monday to help them plan ahead of time.

The guide gives options for staggered schedules, ongoing distance learning, and models that combine both. It also directs educators to teach proper handwashing and limits the number of students allowed on buses to prevent the virus from breaking out in schools.

"This guidance is only as good as what's implemented," State Superintendent Tony Thurmond said in a press conference. "We expect it will be adjusted as we go."

North Carolina Gov. Roy Cooper also released health guidance for reopening schools Monday, telling reporters that this school year will be unlike any other.

"Students and staff will be screened for illness before they enter the school. Children will be asked to stay distant from classmates. They won't be sharing pencils or textbooks and there will be a lot of cleaning," he said.

Openings will be dependent on health metrics, he said. But North Carolina Secretary of Health and Human Services Dr. Mandy Cohen said during a press conference Monday that she's concerned the state's positive tests are among the highest in the nation.

"These trends moving in the wrong direction is a signal we need to take very seriously," Cohen said.

California takes steps back toward normal

While North Carolina is seeing cases rise, California -- with trends holding steady -- is beginning to reopen some recreational sites.

The state, which has been among those most affected, has

Yosemite National Park, which has been off limits to visitors since March 20, will reopen to the public Thursday.

It will aim to admit only half of its average visitor rate, beginning by allowing 1,700 vehicle passes each day, according a statement from park spokesman Jamie Richards.

"There is no place like Yosemite, and we can't wait to welcome visitors back," said Acting Superintendent Cicely Muldoon. "It's going to be a different kind of summer, and we will continue to work hand in hand with our gateway communities to protect community health and restore access to Yosemite National Park."

As early as Friday, indoor California movie theaters may reopen, according to guidance from the California Department of Public Health (CDPH) released on Monday.

Theaters are required to limit attendees to 25% of capacity or a maximum of 100 attendees, whichever is lower.

Theaters will also need to reconfigure seats to ensure physical distancing between moviegoers, who must wear face coverings when not eating or drinking to mitigate virus spread, the guidance says.

As many of the hardest hit states begin to recover from the pandemic, cases rise elsewhere.

Vermont, where new cases are increasing, had an outbreak reported Friday with at least 62 people infected near Winooski, Vermont Health Commissioner Dr. Mark Levine said. Dozens of children were among those infected, and more than 1,000 people in the state went to get tested following the outbreak, Levine said.

Vermont State Epidemiologist Patsy Kelso said the outbreak was spread by friends and relatives, and through contact tracing it appears to be well-contained.

In Utah, state Rep. Suzanne Harrison called a recent spike of cases "very concerning (and) approaching exponential." The positive test rate doubled from one day to the next to 18.5%, she tweeted over the weekend.

"When you're away from home, please avoid close contact with others, and wear a mask when other social distancing measures aren't feasible," the Utah Department of Health tweeted.

In the last week, Texas and Arizona have seen spikes in cases, with both reporting more than 1,000 new cases in one day.

Sign up here to get the latest health & fitness updates in your inbox every week!

Virus morning update: WHO walks back comments on asymptomatic spread. Get the latest here.

A top World Health Organization expert has tried to clear up “misunderstandings” about comments she made that were widely understood to suggest that people without COVID-19 symptoms rarely transmit the coronavirus.

AURORA, COLORADO - MARCH 18: Four-year-old Messiah Guyton puts on hand sanitizer before eating his snack provided by Hoffman Library, part of Aurora Public Library, as he and other children from the neighborhood play outside the library on March 18, 2020 in Aurora, Colorado. The children had no school due to the COVID-19 crisis. (Photo by RJ Sangosti/MediaNews Group/The via Getty Images)

A commuters walks on a nearly empty subway platform in New York, Monday, June 8, 2020. New York City is reopening a limited range of industries on Monday.