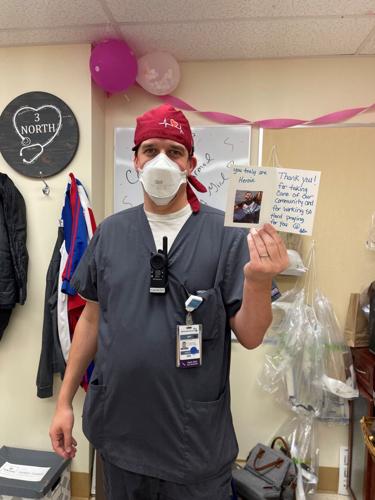 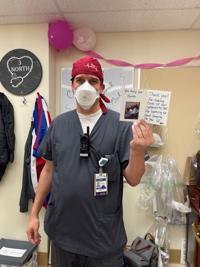 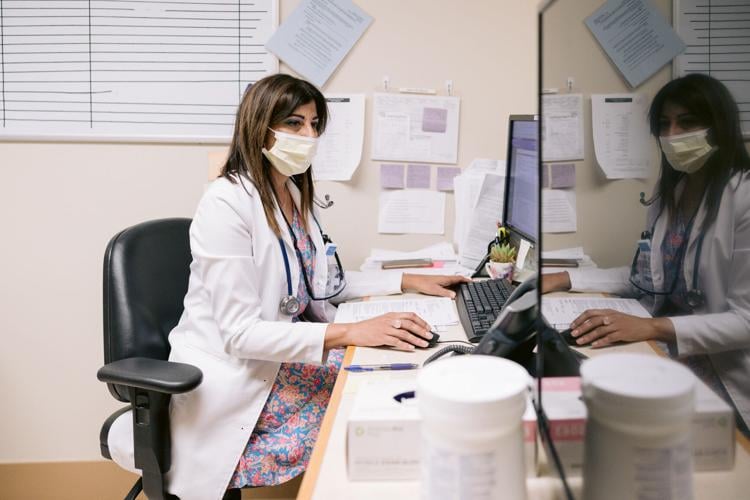 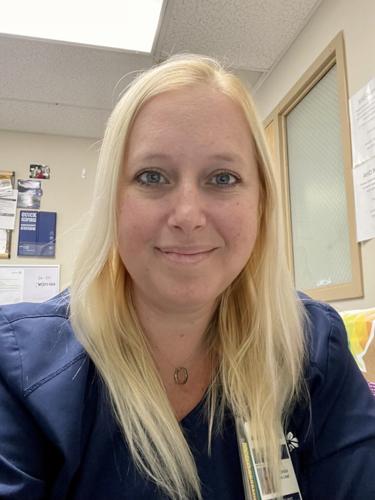 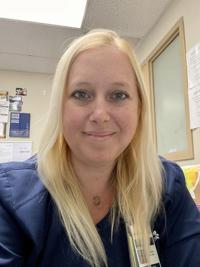 During the peak of the COVID-19 pandemic Adventist Health Hanford nurse Jeffrey Martella assisted one of his COVID patients down the halls of "3 North" — the hospital's COVID wing — to say goodbye to a dying loved one.

“Even through a language barrier — grief is grief,” Martella said, visibly emotional.

During National Nurses Week Martella was among local medical professionals who reflected on COVID-19 and how the last two years of the pandemic have affected them professionally and personally.

Tina Pertle is the manager of 3 North, though she worked as a charge nurse through most of the pandemic.

“We were able to handle more as nurses during the pandemic than we ever had before,” Pertle said.

Martella, RS BSN, started his nursing career four years ago, not too long before COVID would turn his profession upside down.

Martella still recalls when it was announced during a morning meeting that 3 North would become the landing spot for COVID patients when the virus inevitably made its way to Kings County.

“I thought, ‘OK, this is real. It’s not just something in the news. We’ll have to make some adjustments on the fly,’” Martella said.

Once patients — both coming in for COVID symptoms and those coming in for other reasons who happened to be infected with COVID — began being admitted, the days got longer and harder for the nurses of 3 North.

At the pandemic’s peak, the wing had about 90 nurses — three full units of 30.

About six months into the pandemic’s long hours, double shifts, emotional ups and downs and constant exposure to the virus, the hospital offered to allow nurses to transfer out of 3 North for a break.

“Every nurse refused — they wouldn’t leave the unit,” Director of Nursing Michael Denham said, adding that at the time, the wing felt like a “war zone.”

“I didn’t want to be anywhere else. I felt like ‘this is history, this is going to be in the history books’ so I wanted to be one of those fighting to help keep people alive throughout this,” Martella said.

'We saved a lot of lives'

Martella credits the wing’s team work as well as the leadership of Infectious Diseases Specialist Dr. Mina Raju, for the success of 3 North.

“With her instructions, we saved a lot of lives,” he said.

“The learning curve was very short,” Denham said, adding that the COVID procedures the hospital uses today were developed in the first few weeks of the pandemic.

Though the team established working protocols quickly, the severity of the pandemic proved that tragedies would soon be inevitable.

Kings County, along with Imperial and Lassen counties, were among the hardest hit in California in terms of cases per capita, according to statistics from the New York Times.

“There was many a time after a hard shift where I’d go out to my car and have a good cry just to let the emotions out,” Martella said. “When you deal with people who are suffering, you can’t help but feel for them.”

Adventist also had a therapist available to staff members who wanted to talk after particularly hard shifts, which Martella said helped in not taking negative energy home to family and friends.

In other efforts to keep work at work, the nurses came up with routines to get clean and germ-free before interacting with loved ones. Many nurses would strip out of their scrubs while in their garage and streak right toward their showers, Pertle said.

“The house would know that when mommy gets home, before you hug her, before you touch her, you have to ask ‘does mom have cooties,’’ she said.  “It shaped a whole habit, a whole lifestyle.”

Pertle said that she’d never had to think about “bringing something home” to her family before in her 14-year nursing career — but COVID changed that nearly overnight.

“I didn’t want to be the reason someone in my family got sick,” she said.

Martella agreed, saying he went nearly a year without seeing his grandparents out of precaution.

Still, with every precaution in place, the vast majority of the 3 North has gotten COVID, with varying degress of severity.

Only Pertle, Martella and one other nurse in the wing have — so far — managed to avoid infection.

“You would know someone got it because you’d get a text asking if you could cover a shift,” Martella said.

In addition to worrying about themselves and their families, the nurses of 3 North also worried about their patients.

“One of the major things that stands out to me is when we didn’t have any visitors in the hospital on the recommendation of the CDC. When a patient's family couldn’t come visit, that was a significant hardship, not only for patients but the nurses, as well,” Denham said. “Patients do better with their families around.”

Pertle said that the hospital came up with ways to allow patients to interact with their families, including FaceTime and tablets. Nurses would also call families directly to give updates.

“I’d always give them as honest of a picture as possible, but I always tried to give them hope. I noticed one of the biggest things that helped people recover from COVID was hope. As long as there was hope, miracles would happen,” Martella said.

Another emotional hardship during the pandemic was dealing with families that were admitted together, as was common due to the way and rate in which COVID spreads.

“It could be parents and children or husbands and wives, and that would be stressful because they’re in there and, God willing, once one would be well enough, we would wheel them to the other’s room to visit, if possible. It really did affect us, if it was a husband and wife,” Pertle said.

Even with COVID cases dropping and vaccination numbers rising, the team stays vigilant and cautious about any new waves or variants — as they’ve seen so many in the last two years.

“The burden has gone from being almost overbearing to being close to normal, or a new normal,” Martella said.

“We now have a whole group of nurses learning to do things other than COVID care,” Pertle said. “You have two years of nurses that have graduated throughout the country that have done nothing but COVID and now they’re finally able to practice the other things they went to school for.”