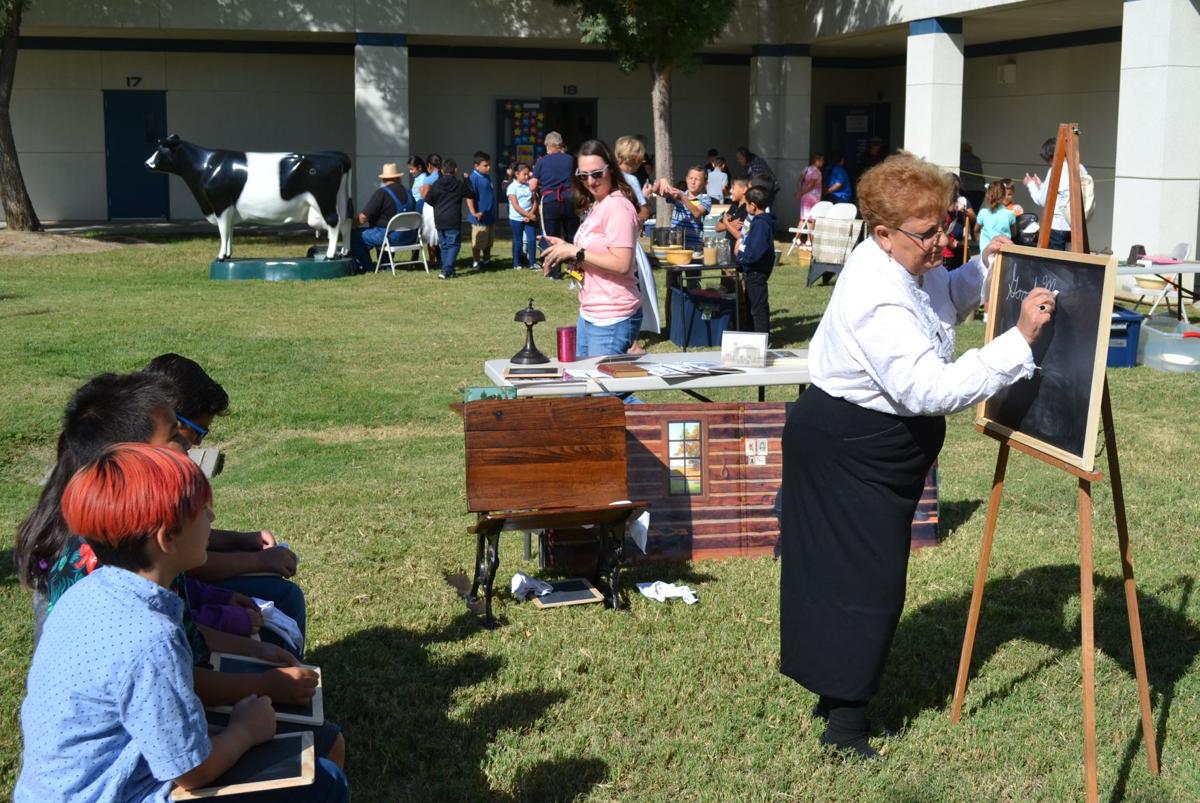 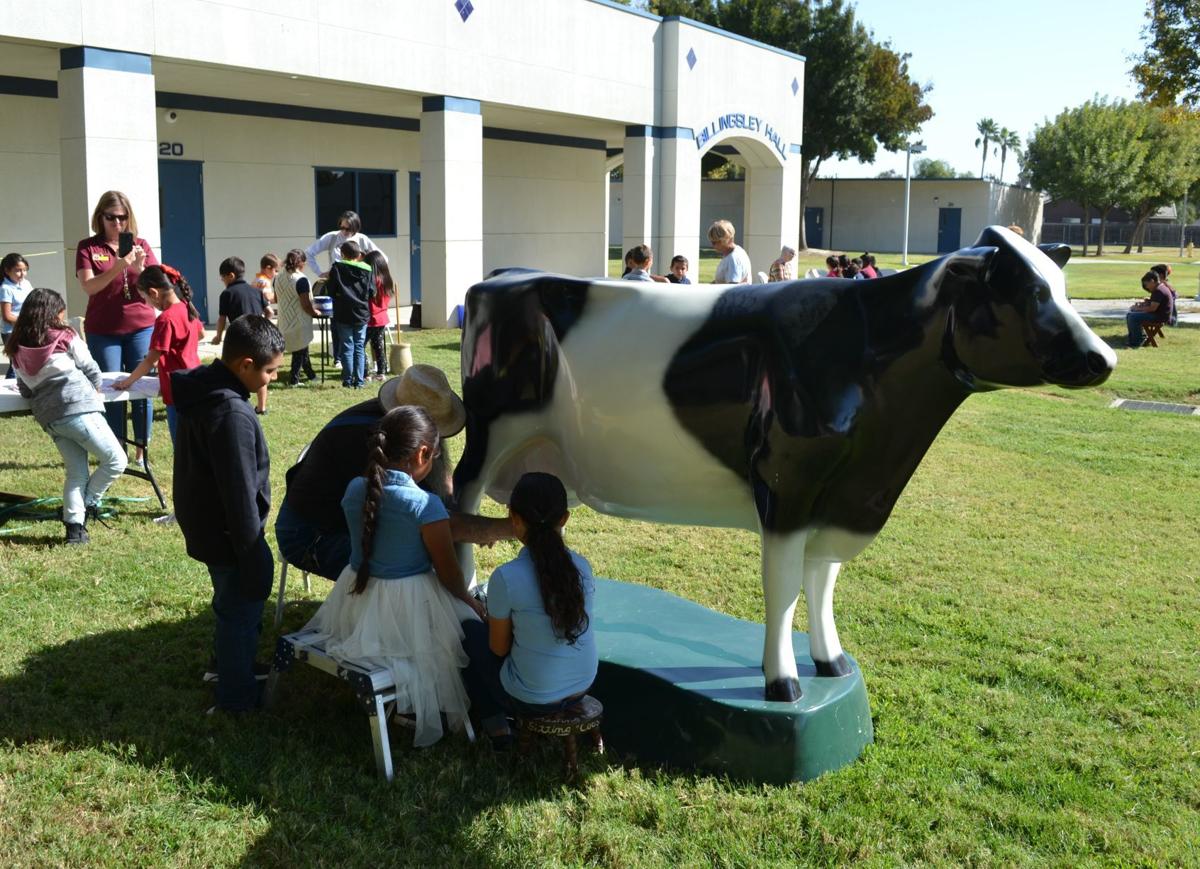 Students learn how to milk a cow as one of the hands-on activities Friday morning. 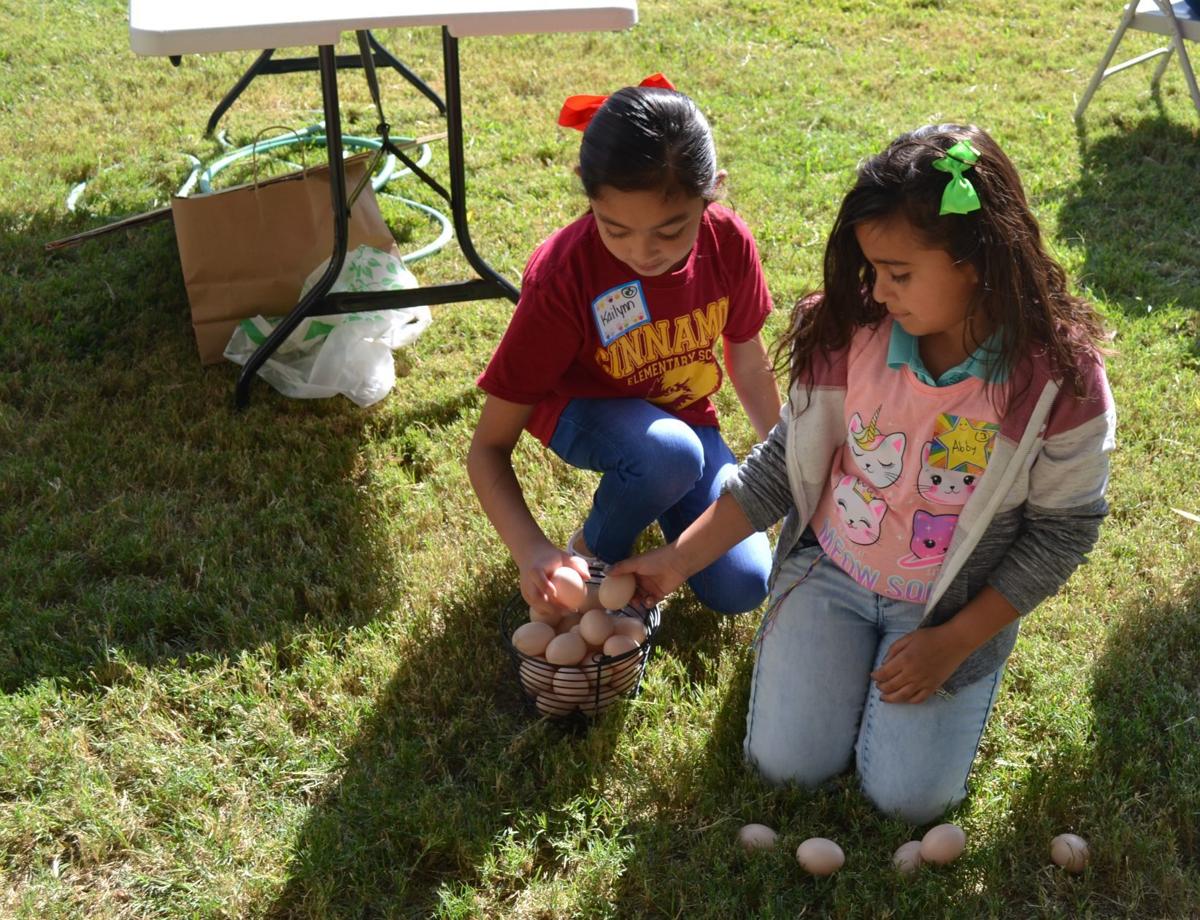 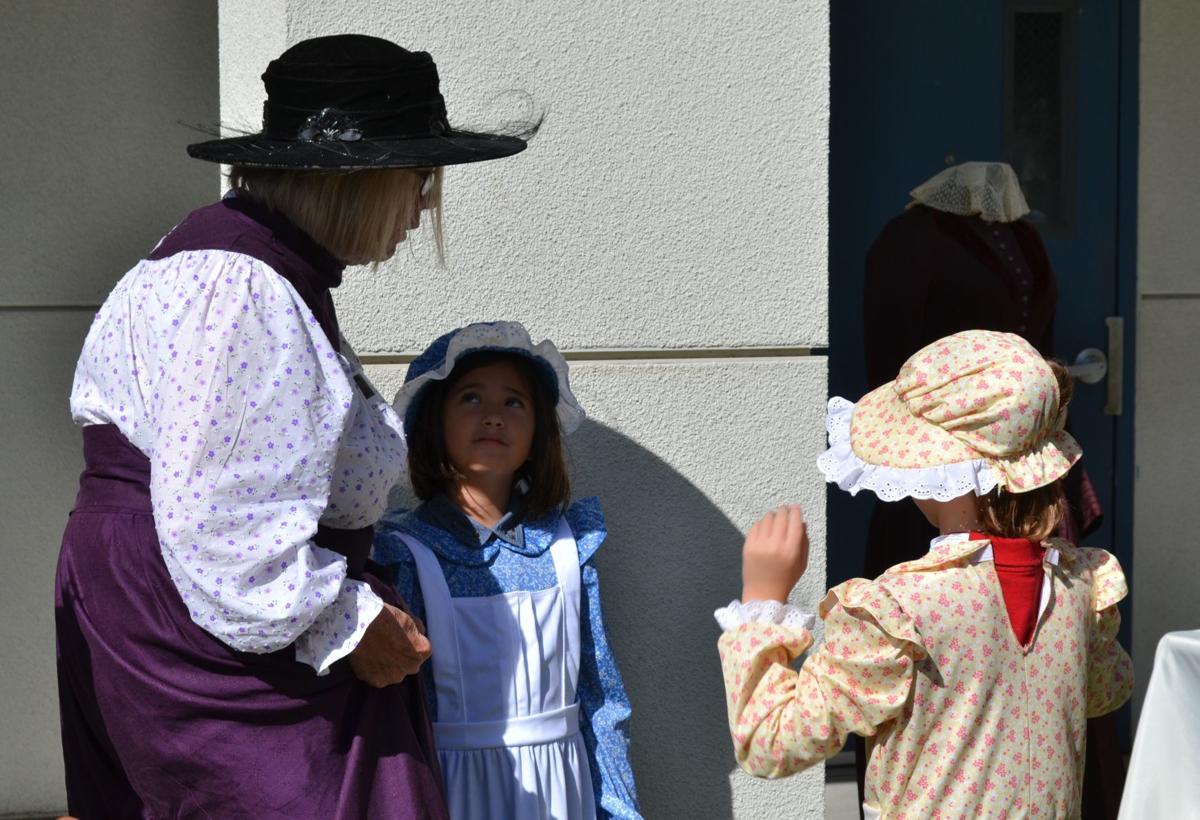 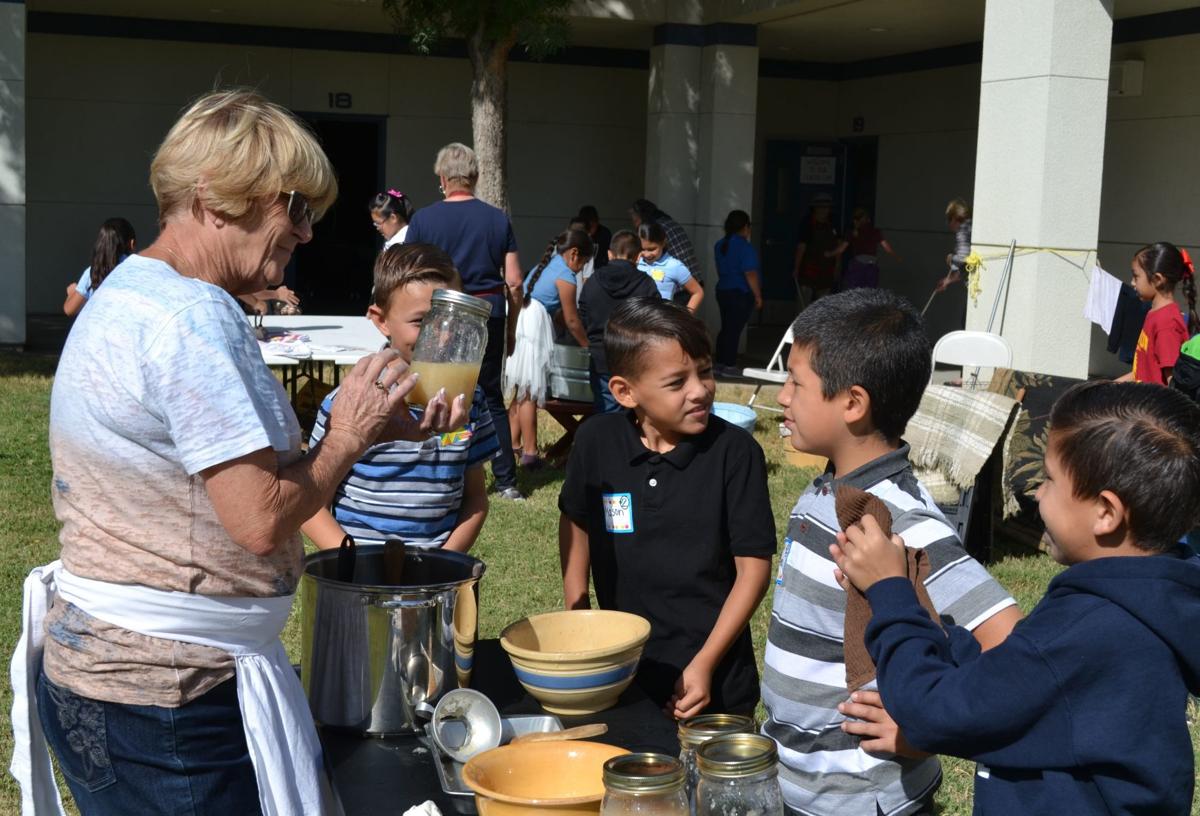 Third-graders learn how to make homemade applesauce during the two-day assembly program on Friday at Cinnamon Elementary. 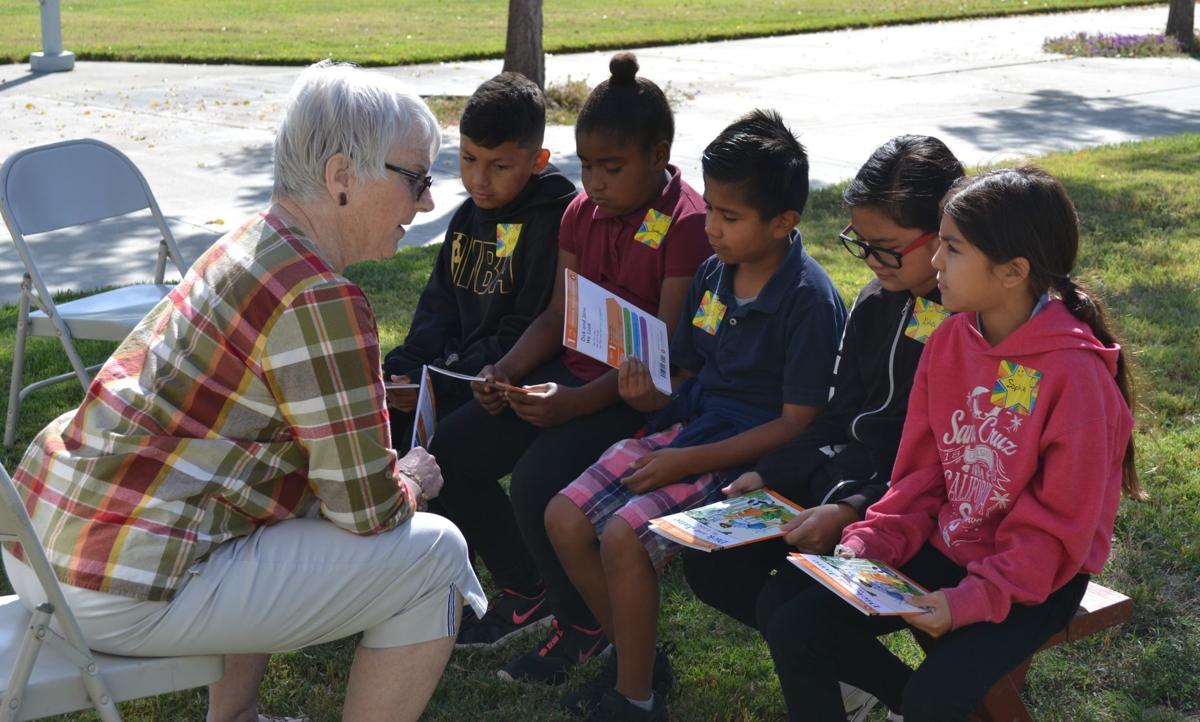 LEMOORE — Third-graders at Cinnamon Elementary were transported back to the 1800s on Friday for a hands-on assembly program featuring Lemoore history.

The school partnered with the Sarah A. Mooney Memorial Museum for two days full of historical activities that revolved around the third grade’s social studies curriculum.

“We haven’t come out to a school like this, but we’ve had field trips where the kids come out to the museum,” said Susan Drew, a museum board member. “We’ve never brought it to them, so this is a whole different way of learning.”

The first day of the program offered more traditional classroom work, while on the second day students were able to go outside for hands-on activities.

About a dozen retired teachers volunteered with museum board members to host the program. The activities included settings commonly seen in the 1800s, such as a historical kitchen and classroom, chore center, games and costumes from the past.

“They love it; they can hardly contain themselves,” said Erin Vogel, a Cinnamon Elementary third grade teacher. “One little girl’s dad came up and said, ‘she got up at 6 a.m. and was ready to go to school and do her stations’, they have been going crazy.”

Third grade students were able to learn how to churn butter the old fashioned way, make applesauce, play pick-up sticks, write in cursive, dress like a pioneer and even milk a model cow.

The two-day program took about six months to plan and volunteers came out early to set up the stations, which mostly contained items straight from the museum.

“There were many sleepless nights (preparing) because I worry too much about the details,” said Betty Brown, a museum board member. “It’s taken a lot of thought, especially to look through all the museum items.”

Volunteer Carol Dias, a local retired teacher of 35 years, gladly accepted the opportunity to teach third-graders cursive for the program.

“Every time you get them out of the classroom, it makes a difference,” Dias said. “You never know when what they learn at one of these stations will make an impact.”

The Sarah A. Mooney Memorial Museum will also be hosting Cinnamon Sunday, an event for all Lemoore third-graders, from 12 p.m. to 3 p.m. on Oct. 26 at the museum at 542 W D St.

Visitors will be able to see the museum and play historical games as part of an effort to teach students more about Lemoore. Third grade students from other Lemoore elementary schools are also invited.

This is the first year the museum has partnered with the school for hands-on learning, and Drew hopes to come back next year, she said.

“It’s pretty neat to see how involved the kids got,” Drew said. “Some of these kids have never been to a museum or done anything that wasn’t current day. To take them back 150 years is pretty amazing.”

FRESNO —Standing in the sand looking south, it looks like many beach towns around the world. The deafening slow pulse of the ocean overwhelms …

FRESNO — Nicola Mazzanti, piccolo, and Natasha Kislenko, piano, will perform at 2 p.m. Saturday, Feb. 29, 2020, in McDonald Hall Atrium on the…

Valley Vertigo: It's been 2 years since the old fire station was destroyed

In the middle of winter, a blooming plant for the home, office or garden makes a festive Valentine's or "just because" gift. How about a gift …

Life Notes: He sees you when you’re sleeping

I know it’s February, so singing or being reminded of Christmas songs, is for sure not ok. But my kids have locked onto that one Christmas son…

Students learn how to milk a cow as one of the hands-on activities Friday morning.

Third-graders learn how to make homemade applesauce during the two-day assembly program on Friday at Cinnamon Elementary.