The decorations of the Chinese Pagoda are shown. 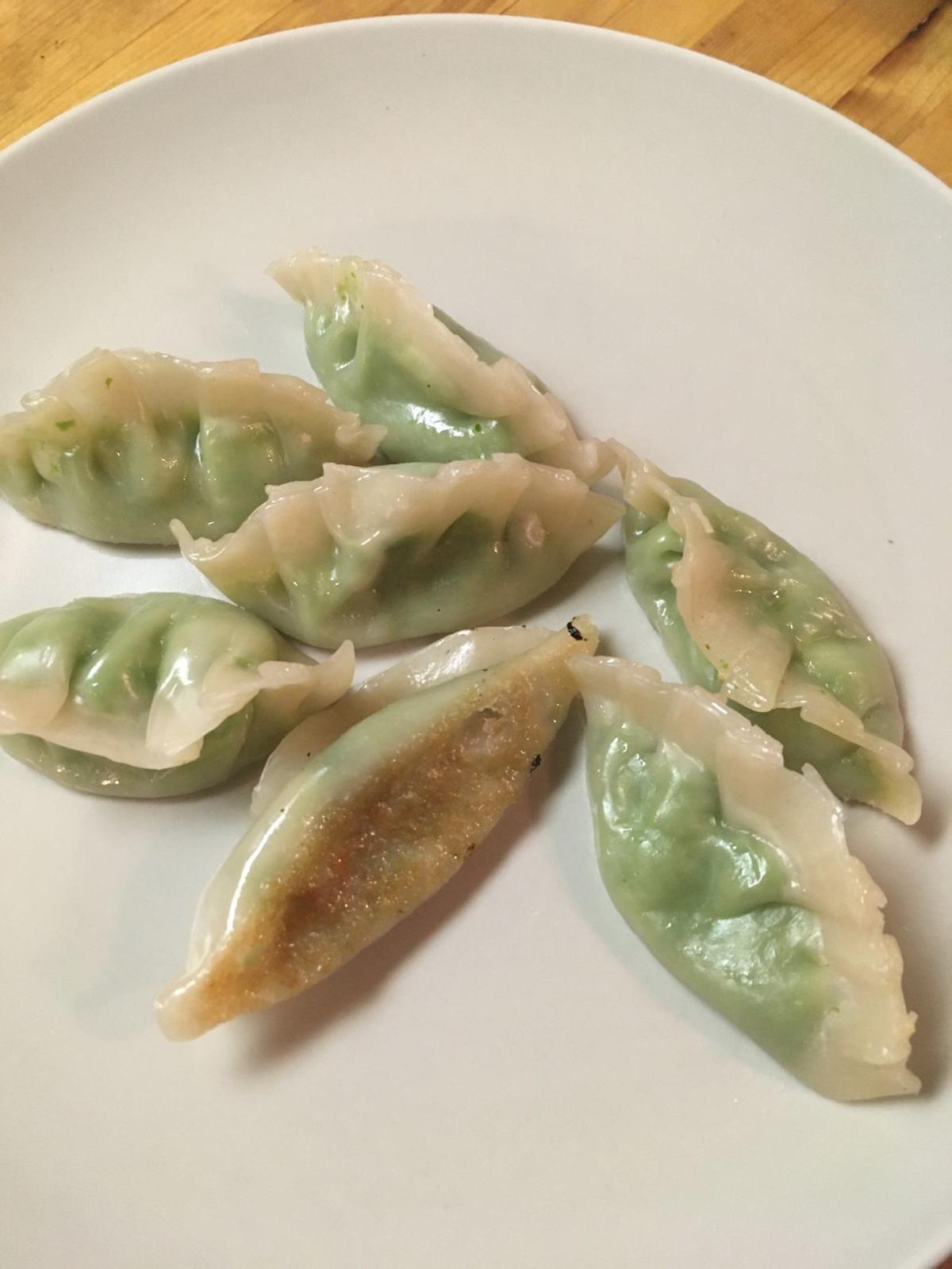 Pea and avocado potstickers are shown.

For our column-tour through the five buildings that once housed my family’s Chinese Pagoda and Imperial Dynasty restaurants, I am leading you back to where we were for tour nine — the Chinese Pagoda dining room. I want to share with you two items that mesmerized me as a child; today I value them for their timeworn distinctions.

We step across the threshold of the entryway and sit in the waiting area in front of the black wooden screen with decorative ceramic inlays. This screen was part of the original décor when the restaurant opened in 1937.

There are five panels in this screen, which appears to represent a story through the colorful ceramic inlays. Two connecting panels show a vivid Chinese pavilion with two figures inside, the floor is a black and tan checkerboard. The other panels display numerous figures, some reading scrolls, a few performing chores, and others resting. It’s as though within the screen’s story, each panel has a vignette of its own.

As a child I stood in front of this screen, trying to interpret the story, which to my young eyes seemed go on forever. I had my favorite figures and I liked tracing my fingers around the ceramic pieces. As you can see, others were just as enchanted. Many of the faces and figures were pried off by patrons and removed from the premises. But however marred and scuffed the screen is today, it remains one of the shining hallmarks of the Chinese Pagoda restaurant.

Lets walk over to the east wall directly across from the waiting area. Here is the cash register counter. The counter is about eight feet long and four feet high. This counter was constructed during a minor remodel of the restaurant’s interior prior to the 1958 major remodel.

As a child, I was purely fascinated by its design. Uncle Richard had created a display of herbs, spices and other ingredients commonly used in Chinese cooking. He filled eight-inch square plastic storage boxes with cooking ingredients he wanted to highlight and arranged thirty-six of the filled boxes into three rows and encased them in the front of the counter. Although preserved in this display for many decades, the ingredients are still colorful and recognizable. Among them I can identify for this tour star anise, several types of dried mushrooms and fungi, cinnamon sticks, rock sugar, Chinese five-spice, dried ginkgo nuts, dried ginger, and dried “haung jo,” (also known as jujube). I am still infatuated with this counter. I want to be able to name each ingredient — another item on this year’s bucket list.

In the meantime, I want to respond to someone else’s bucket list. I was recently asked if I had a dumpling filling that was vegetarian but did not have tofu, cabbage, or carrots in the ingredients. Here’s what I came up with for this request. Check off this item, and I hope you enjoy these Pea and Avocado Potstickers.

Arianne Wing is the co-author of “Noodles Through Escargots,” and co-owner of the L.T. Sue Co. Tea Room and Emporium, benefiting the restoration and preservation of China Alley. She may be reached at arianne@ltsue.com.

Place all of the ingredients in the bowl of a food processor. Pulse until well combined. Place the mixture in a bowl and taste for seasoning, adding more soy sauce or pepper if needed.

Assemble the dumplings. Place a scant tablespoon of filling in the center of a round wonton wrapper. Moisten the edges with of the wrapper with water with your finger. Fold the wrapper in half, pressing the edges to seal and eliminating any air bubbles. Repeat with remaining wrappers, keeping the unused wrappers covered. Keep the prepared dumplings covered with a slightly damp paper towel so they won’t dry out as you continue to fill and fold the rest of the wrappers.

Heat a wok or large frying pan over high heat. Add 1/2 tablespoon of oil to the wok and tilt the wok and swirl to coat the bottom. Working in batches, place the dumplings on a single layer in the hot wok and cook until the bottoms of the dumplings are golden. Add 1/2 cup of water and immediately cover the wok with a tight fitting lid. Cook until all of the water has absorbed and the dumplings skins have cooked through, about 5 minutes. Repeat with remaining dumplings. Serve immediately with your favorite dipping sauce. I like to use a simple mixture of soy sauce, Chinese black vinegar (or balsamic), and a kiss of sriracha.

The decorations of the Chinese Pagoda are shown.

Pea and avocado potstickers are shown.