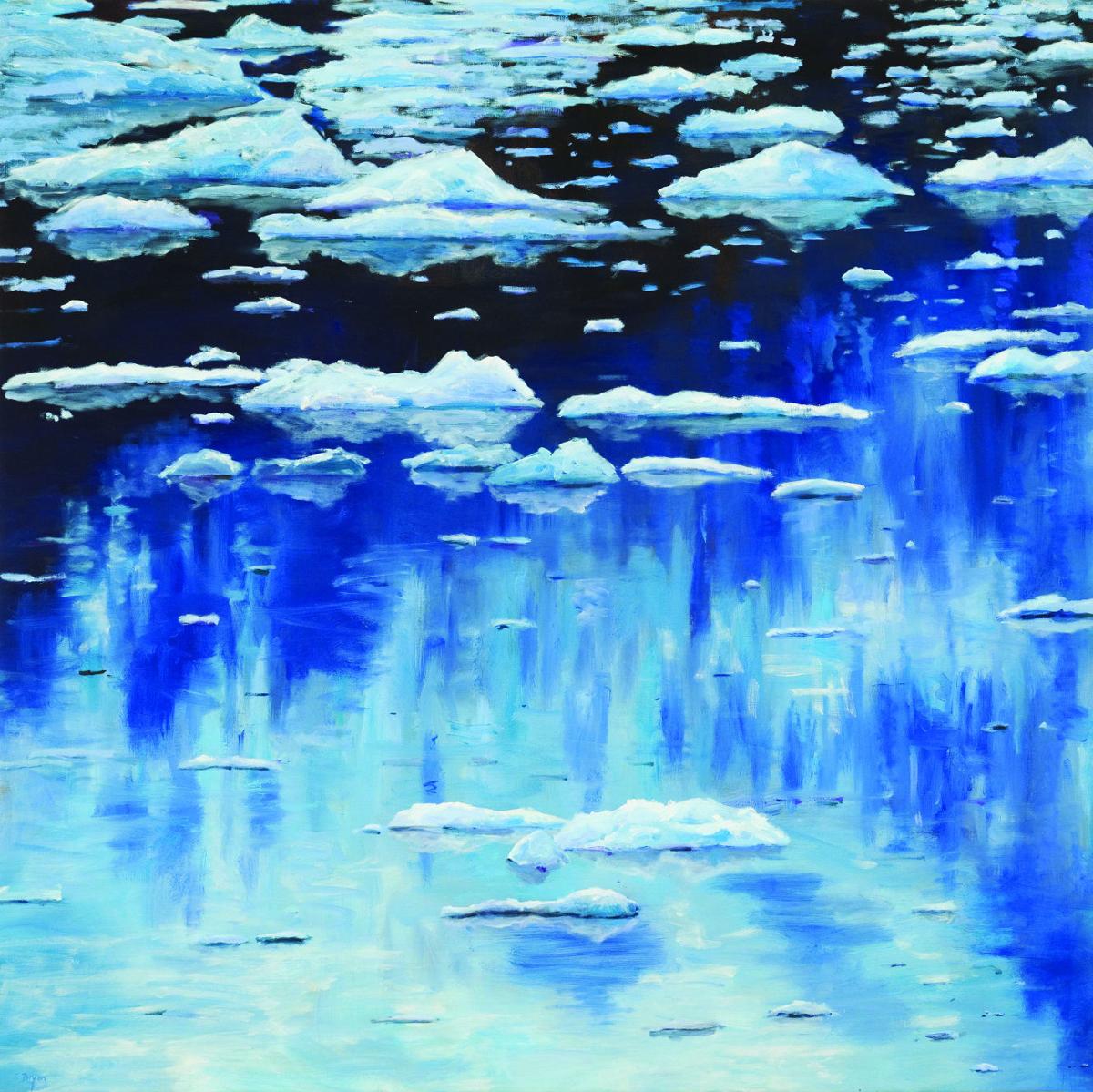 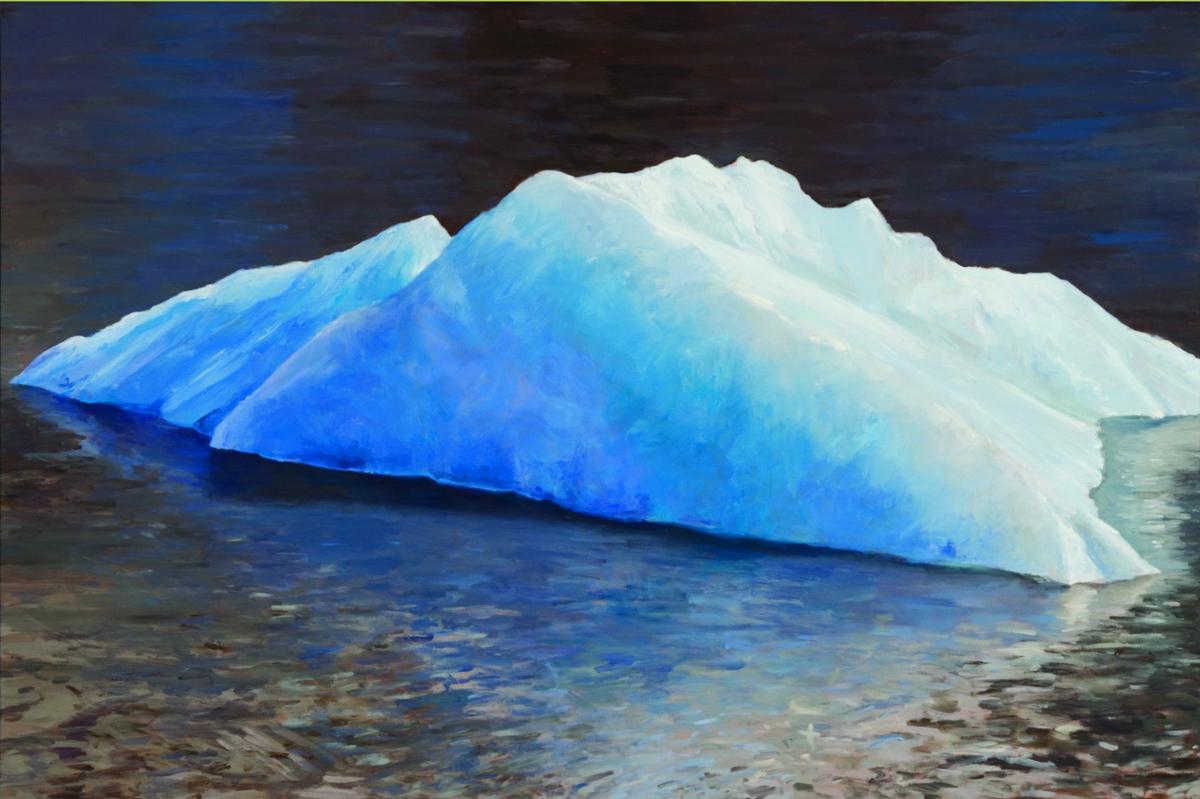 There’s nothing quite like the artwork of frozen landscapes. You can almost feel the cold while viewing the beautiful work of Stanford artist Sukey Bryan. The opening reception for her “Glacial Visions” exhibit at Kings Art Center, 605 N. Douty St. in Hanford, is set for 5:30-7:30 p.m. Friday. The exhibit will be on display from Jan. 30 through March 19 in the Marcellus Gallery.

Bryan exhibit features paintings, monotypes and sketches when she was an artist in residence at Alaska’s Denali National Park and Preserve. She recently had a public installation — “Sky fountain: Installation in the time of drought” — on display at Stanford University.

Bryan’s grants and awards include:

The Sentinel talked to Bryan before her exhibit opens.

Q: How would you describe your Glacial Visions exhibit?

Bryan: Glacial Visions is work created over the last six years based on the Alaskan glacier cycle, drawn from a short trip to Alaska for an artist residency program in 2008. The landscape was so magnificent and fascinating, from snow to ice and to the eventual breakdown into icebergs and finally melt-water, that I have worked for seven years creating over 100 pieces.

I want to celebrate this remarkable seasonal earth system delving into the colors and shapes of water in all these different states with the understanding that the glaciers are threatened by rising temperatures in the atmosphere with melt-rates faster than new ice can be formed.

Q: Reading your bio, you’ve traveled to Scotland and Iceland, were born in New Jersey and lived in France. Is there a particular place that has influenced your work?

A: That is actually a hard question because I feel I’ve been deeply affected by every place I’ve lived. I think the seeds of my desire to paint are from the three years my family spent in Paris where we moved for my father’s work. I remember when I was nine sitting on a bench in front of Monet’s water lily paintings at the Musee Mormottan in our neighborhood, trying to figure out how he made the paintings, picturing his hand moving, and thinking how lucky he was.

I grew up in Connecticut next door to beautiful wooded water company land where we played and walked all the time as kids, and we were within reach of New York City where I was exposed to the arts.

Living in California for the past 17 years, I have been very drawn to all incredible landscapes and eco-systems of this varied state. Most of my work is based on the areas that surround me here, including series on ocean waves, winter rains, grasses, wild fires and recent work based on the drought sky over my own backyard.

Q: How did you become an artist in residence at Denali National Park and Reserve? What was that experience like?

A: I applied to the artist residency program in Denali National Park and Preserve (the national Park service has several residencies around the country with an open application process) and was thrilled to have the chance to immerse myself in that landscape.

I lived and worked alone in the East Fork Cabin, which is offered to four artists over the summer. I was in the middle of Denali National Park and Preserve (which is larger than New Hampshire!) for 10 days in August. I was surrounded by the most vast and unaltered landscape I have ever seen, filled with all the plants, animals, and birds, including grizzlies that lumbered past the cabin on their way to the river for plants and drink. It was actually loud from all the rushing water, birds and wind.

Everyday, I sketched, painted and photographed the area surrounding the cabin, and in the evenings read about the ecosystem including Adolph Murie’s pioneering study of the local wolf population, which he conducted from that very same cabin. This enormous valley had been carved and gouged out by glacier runoff over the millennia.

And the ecosystem is completely dependent for survival to this day on the meltwater of the braided rivers that run along the valley floor. The meltwater is the lifeblood of the park. Glacier ice is a major force in Denali’s formation and continuing environment, but the ice itself was far away, up high in the mountains around me.

So during my time in Alaska, I also visited Prince William Sound, where I could get up close to the glacier ice. I spent five days photographing and sketching the ice, soaking up its appearance in different times of day and all kinds of weather. The Glaciers in this area are formed from the huge snowfalls in the winter. The snow compacts and turns into ice, which makes its way like a creeping river down to the Sound. This whole process takes about 100 years.

I was able to see the ice cliffs, and various shapes and sizes of the ice that calves and breaks up into smaller and smaller pieces as it melts into the Sound. What I was seeing in this breathtakingly beautiful place was a normal process of snow to ice to water, and so I have painted something that is supposed to happen. But what I know, and what we know, is that this process is being accelerated by climate change.

In the Marcellus Gallery

Hanford Gourmet: Downtown lost a piece of its history in summer fire

I was on the phone with my longtime friend, Dea Jensen, when our conversation led to the loss of Hanford’s historic buildings that were destro…

Not too many businesses have hit the trifecta in street locations in Hanford like the Hanford Sentinel.

HANFORD — After months of social distancing and canceled events, the Rusted Ranch Fall Market gave some local businesses an opportunity for fa…

The Future of Farming: Calling the role of Hanford FFA officers

Calling the role of officers!

Life Notes: Getting some actual rest

These past few months have been tiring. Well, to be honest, very tiring. It seems that so many things are changing at once: having to adapt ou…

Living on Purpose: The knowledge of good and evil

As Christians we often think the world does not know about God and this is the reason they go about their merry way being captivated by sin. T…

Looking Back in Lemoore

Around Kings County: UPS, Amazon facilities opening in the area

UPS ready to open in Visalia — now Amazon will join them