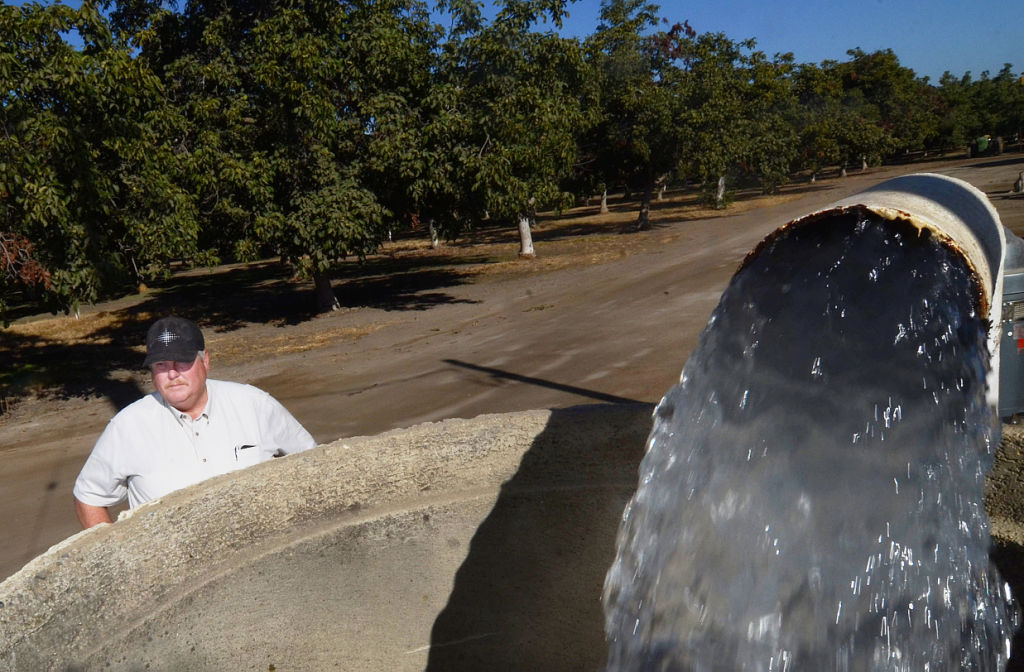 Doug Verboon, a walnut grower and Kings County supervisor, has spoken about the need to manage the pumping of groundwater. 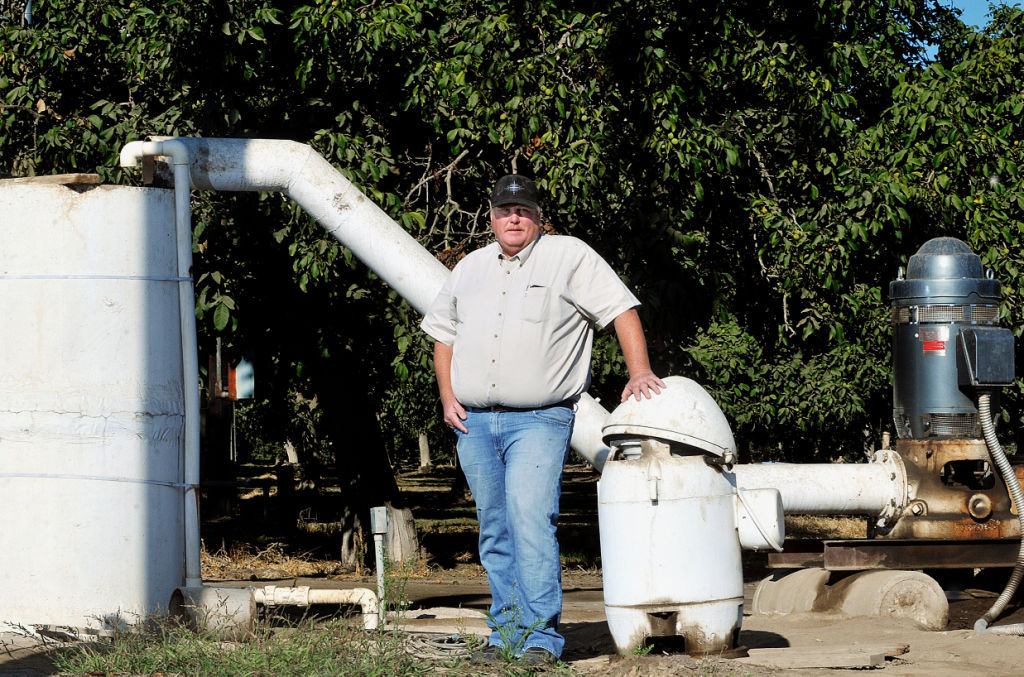 Doug Verboon, a Kings County supervisor and farmer, believes that a groundwater management program is necessary to protect area agriculture.

Doug Verboon has gotten himself into an interesting position.

When the first-term supervisor was elected to the Kings County Board of Supervisors four years ago, the county's water supply looked a lot better.

Now drought has pushed Verboon in a direction he couldn’t have foreseen — advocating for a groundwater management program that is deeply unpopular among local farming families who count on being able to pump the wet stuff out of the ground as necessary.

As the only board member growing a crop, Verboon has one foot firmly planted in the farming camp. As a supervisor, he puts on a slightly different shoe — one that has forced him to redefine the balance between the long-term health of the county and individual growers’ freedom to make a profit.

At a minimum, regulation means monitoring pumping at most if not all wells — information that is closely guarded by land owners. It also means restricting pumping as a tool to bring overdraft into balance. Perhaps even more importantly, it upends long-established local farming traditions.

The state passed a law requiring a groundwater management plan for the Kings River basin by 2020. All legal hell could break loose after the clock starts ticking on Jan. 1 next year.

Verboon thinks the new law was rushed, but he’s also convinced that the groundwater overdraft problem must be addressed. For him, doing nothing will lead to a survival-of-the-richest scenario where only the grower with the deepest pockets will be able to reach water.

The way Verboon tells it, he’s just verbalizing what many are afraid to say in public.

“Nobody wants to be the bad guy,” he said. “I feel like I’m sticking my neck out.”

Nowhere was his delicate position more noticeable than at a groundwater briefing last month sponsored by the Kings County Farm Bureau. The fact that it was hosted by the law firm Kahn, Soares & Conway indicates where many think the new law will end up: mired in court.

It wasn’t clear from the packed audience whether a majority wanted to fight it tooth-and-nail or try to implement it.

Verboon cleared his throat and told the roomful of growers what he thought.

“I think we can come together as a region within five years,” he said. “We’re going to offend some people … some people are abusing our groundwater.”

There was no applause for that line.

Verboon was better received when he talked about the desirability of new dams on the Kings and San Joaquin rivers. For years, Kings County supervisors have passed resolution after resolution supporting major new water storage projects, but not much has happened.

With new dams still only a possibility dancing on the far horizon, the reality of huge amounts of groundwater being pumped out of the ground in the middle of a severe drought is hitting home hard. Household wells are going dry, city water supplies are being threatened and nobody knows how bad it will get next year — let alone after that.

“If we pump our well water, and get rid of it, or use it all up, then we’re not good stewards,” Verboon said.

But by no means does everybody see things Verboon’s way. In fact, when he makes statements about the need for universal metering and possible pumping restrictions, there’s a lot of silence in the room.

People who aren’t jumping on the bandwagon — Supervisor Joe Neves among them — point out that Verboon has surface water rights for his walnut orchards and has the right kind of soil to recharge the aquifer beneath them.

There are many other growers who also have acres of trees, but only a well or two to keep them alive. Forcing farmers to limit pumping raises particularly thorny issues of due process, eminent domain and compensation for lost property/income.

“Supervisor Verboon is in a wonderful area … that has some recharge ability,” Neves said. “Unfortunately, many of the areas in Kings County do not have the ability to sink water in the same location and be able to pull it out and use it at a later time.”

Neves doubts that the state of California can regulate groundwater effectively. Nor does he think local leaders should necessarily bust their butts to attempt the tricky regulations themselves.

“Part of me just says, ‘Go ahead and let the state do it, and we’ll sue them,’ ” Neves said. “I’m not sure they can do anything right, to be honest with you.”

Neves keeps beating the drum for more water storage, but he’s not sure anybody’s listening in Sacramento.

Rather than follow Verboon into a hornet’s nest, Neves said he’d just as soon let the chips fall where they may. He thinks the results couldn’t possibly be worse than a state-managed groundwater regulation program.

“I think you just have to let capitalism take its course,” he said. Neves compared it to the economic and regulatory forces that have pushed smaller, less efficient Kings County dairies out of existence.

It’s not that Neves thinks groundwater management is inherently bad. He just thinks that to do it right, it would have to be done for the whole Kings River basin in an integrated way.

As he sees it, the number of growers, water managers and interest groups that would have to agree to pull it off is mind-bogglingly hard to imagine.

“If you could get eight or nine people together in Kings, Tulare and Fresno counties, I think you could hammer out something,” Neves said. “But it would get caught up in the legal process so much, I’m not sure that you could ever get it done.”

Verboon is more optimistic. He’s stumping for action. He’s angering some and making everybody think more about the problem.

“I see my role as implementing a rule to help protect groundwater for the future,” he said. “It’s probably time that we all have [well] meters.”

But for Neves, the whole situation comes close to being out of even the best-intentioned leaders’ hands. If the four-year drought turns into a mega-drought lasting several more years, he sees nothing — including building new dams and/or trying to regulate groundwater — to prevent Kings County’s planted acreage from dramatically shrinking.

“If the climate change predictions are right, the current economic model for production agriculture in Kings County is just not sustainable,” Neves said.

“Nobody wants to be the bad guy. I feel like I’m sticking my neck out.” Doug Verboon, Kings County Supervisor

Getting in on the Water Rush

Among critics of our society’s reliance on petrochemicals, there’s long been talk that we are nearing “peak oil” — the beginning of the end of…

Question: If you’re a Kings County water leader, what do you do to implement the new state groundwater sustainability law?

CORCORAN – First it was Avenal on the verge of going dry. Now Corcoran leaders have decided they’ll be in the same situation if they don’t dri…

‘A coming tsunami’ of dry wells

CARUTHERS — Despite the allure of peace and quiet, life in the countryside in Kings and Fresno counties is looking less and less attractive.

HANFORD – Say “no” to two landmark bills that would comprehensively regulate groundwater in California.

Doug Verboon, a walnut grower and Kings County supervisor, has spoken about the need to manage the pumping of groundwater.

Doug Verboon, a Kings County supervisor and farmer, believes that a groundwater management program is necessary to protect area agriculture.